Close encounters of the Mars kind

Close encounters of the Mars kind 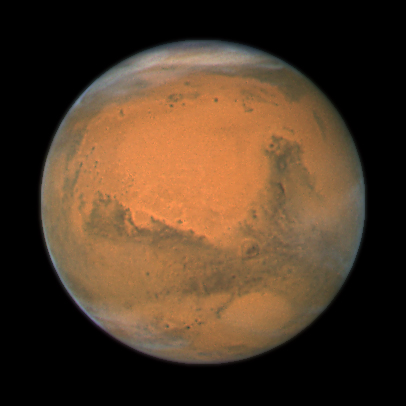 Earth and Mars are converging for a very close encounter as the distance between the two planets shrinks (at 300 km a minute!).

When the convergence ends – in mid April – the distance between the two planets will be a mere 92 million km (an extremely small distance when thinking about objects on an astronomical scale).

It’s an event known as the ‘Opposition of Mars’ – when the Earth passes between Mars and the Sun – hence the Sun and Mars are on ‘opposite’ sides of the sky.

These oppositions aren’t uncommon – they happen every 26 months or so – but what they do offer us is an excellent opportunity to do some back yard observing. The closeness of the planets means that you’ll be able to see the red planet extremely clearly in the sky – almost 10 times brighter than a 1st magnitude star.

There are two key dates of significance – April 8th is the actual date of opposition, when Mars, Earth, and the sun are arranged in a nearly-straight line.

Then on April 14th, Earth and Mars are at their closest point (92 million km).

According to NASA – Mars will be easy to see with the unaided eye, even from brightly-lit cities.  With a modest backyard telescope or even binoculars, you should be able to see the red haze of Mars and potentially the planet’s polar cap.

For more on the ‘Opposition of Mars’ take a look at the NASA video below.