And the winner is … @cosmicpudding

And the winner is … @cosmicpudding

Congratulations to our astronomy student Vanessa Moss (aka @cosmicpudding) — last night she picked up the prize for the Best Student Talk at the Astronomical Society of Australia’s annual meeting.

Vanessa is doing her PhD under the supervision of our Dr Naomi McClure-Griffiths and Dr Tara Murphy of the University of Sydney. 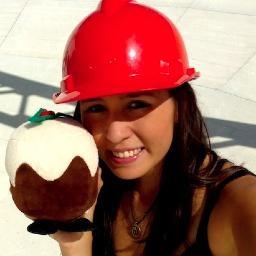 Vanessa has been studying clouds of gas that are on or above the “surface” of our Galaxy. Our Galaxy is pretty much a pancake of stars, dust and gas (with a bulge in the middle): the clouds are on the top and bottom of the pancake, or sitting a little way away from them. These clouds move fast, so they’re called high-velocity clouds.

Vanessa has been trying to answer this question: can we tell the difference between clouds of gas that originate in our Galaxy — that shoot up from it then fall back down, like water droplets in a fountain — and clouds that are just falling into our Galaxy from the outside? (The clouds coming in from outside are fresh fuel for forming stars, so they’re important.)

Anyway, Vanessa’s answer is yes, we can. It’s done by looking at the directions and speeds of the clouds, but also at the physical state of the gas in the clouds. 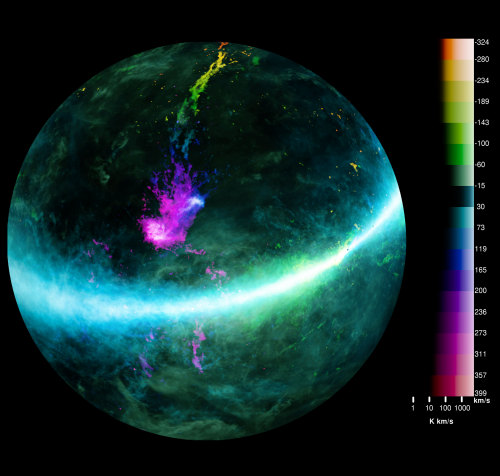 An false-coloured image from the GASS (Galactic All-Sky Survey) made with our Parkes radio telescope, showing hydrogen gas in our Galaxy and the surroundings. The green stripe is the plane of our Galaxy. The purple spot is the Magellanic Clouds, two nearby neighbouring galaxies. Credit: N. McClure-Griffiths and the GASS team

As well as doing serious astrophysical research, Vanessa has also been making a series of videos about the adventures of her pal, the cosmic pudding. Here’s the pudding racing one of our radio telescopes …

Previous post:
The MNF at the Australian Marine Sciences Association Conference 7-11 July
Coming up next:
How people sense acceleration