A weighty problem: How to define a kilo?

A weighty problem: How to define a kilo? 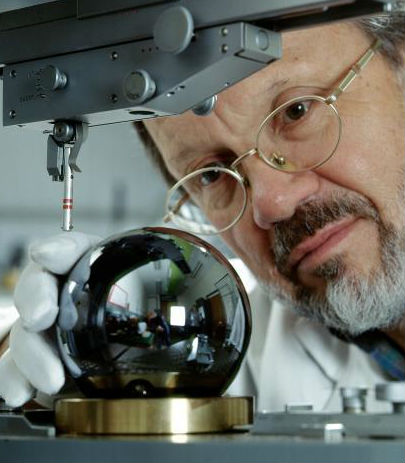 Making the roundest object in the world.

Making the roundest object in the world.

The world’s original ‘standard kilogram’ gained international attention earlier this year when scientists discovered that it had put on a bit of extra weight.

Known as the International Prototype, the standard kilogram is one of seven base units used in science, commerce and everyday life. However, it is the only one still defined by a physical object.  All other units are defined in terms of a fundamental constant of nature, so they cannot change over time.

Made of platinum, the standard kilo has been tucked safely away in a vault at the International Bureau of Weights and Measures in Paris since the late 1800s. However over the years it has been accumulating tiny particles of pollution, in the order of tens of micrograms.

While some might consider this weight gain a positive thing (it means the rest of us are losing weight right?) it does highlight the need to retire the century-old prototype.

This is why the international scientific community is working towards a more accurate definition of the kilo that will bring it in line with other base units such as the metre and the second.

One approach, which involves a team of Australian scientists, seeks to define the kilogram by the number of atoms in a set of perfect silicon spheres. The spheres, developed by CSIRO and the National Measurement Institute, are ideal for the job – they have no edges that could potentially be damaged and only the diameter has to be measured in order to calculate their volume.

With the spheres in the running to form the basis of a new standard, it is hoped we might soon be able to define a kilogram based on its atoms, rather than on our somewhat outdated (and increasingly rotund) Parisian friend.

What to know more about our perfect spheres? Check out this video with science guru  Derek Muller: