Swirling dust and star-forming gas, solar explosions and dancing dishes. These are among the eight photographs and videos that have won top honours in this year’s David Malin Awards, Australia’s premier astrophotography competition.

“The winning entries show both technical skill and an ability to capture the beauty of the sky in a visually pleasing way,” said John Sarkissian, CSIRO Operations Scientist at Parkes radio telescope – ‘the Dish’ – and organiser of the awards.

“More than 200 entries were submitted this year. With such stiff competition, to have received any one of these awards is a great honour. Congratulations to all of the finalists and winners.”

And the winners are… 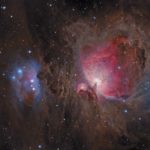 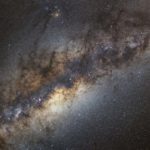 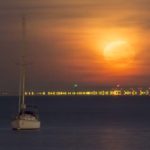 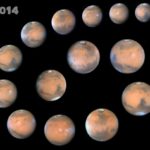 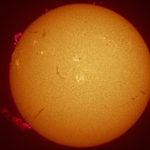 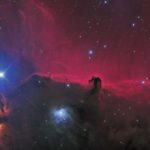 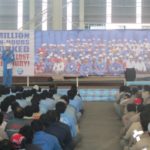 Winning photographs and videos in the David Malin Awards 2014. Click on the images in the gallery above for larger versions.

The Deep Sky category is for photographs taken with a telescope. Paul Haese’s winning entry shows the Great Nebula in the constellation Orion, a star-forming region located 1,300 light years from Earth. The nebula is 24 light years across and Paul’s image shows all the dust and gas in the region.

“This is the best true-colour image of the Orion nebula I have seen for a long time,” said David Malin. “It has everything. The basics are well covered by a realistic-looking colour balance and the dynamic range, which makes the heart of the nebula look brighter than everything else, which is as it should be. But the other things are right too, including the delicate, faint nebulosity that fills the field and the careful handling of the bright stars, which don’t dominate the image. Fantastic!”

“This is a two-frame mosaic of the bright and dusty central regions of our Milky Way Galaxy. The view is toward the centre of the Galaxy in the direction of the constellations of Sagittarius and Scorpius,” said Phil Hart. The Wide-Field category is for photographs taken without the use of a telescope.

This year’s open-themed section sought innovative and imaginative images of the Moon, in any of its phases and guises. Phil Hart’s winning entry captured the full Moon as it set over the shipping channel in Victoria’s Port Phillip Bay, as seen from St Kilda an hour before sunrise on 14 May 2014.

The Solar System – Hires category is for high-resolution images involving subjects that appear smaller than the diameter of the full Moon.

“Every two years and two months, the Earth and Mars approach each other. This image represents a record of the appearance of the planet Mars between January and May 2014,” said Stefan Buda of his winning entry.

The Solar System – Wide-Field category is for wide-field shots of scenes greater than the diameter of the full Moon.

The Horsehead Nebula is a dark nebula in the constellation of Orion. It lies approximately 1,500 light years from Earth. The Flame Nebula lies to the lower-left of the image and is part of the same molecular cloud complex.

Scientific animations are short sequences that have an obvious scientific purpose. These sequences usually require great skill and/or perseverance in first obtaining the data and then in collating them to reveal an aspect of scientific merit.

Peter Ward’s winning entry is a time-lapse sequence of the solar chromosphere. Individual sequences were taken over several weeks, around Easter 2014.

Aesthetic sequences are animations that are visually pleasing in some way, where the use of appropriate music and editing is encouraged, but always with a strong astronomical component.

“Very smoothly edited and professional-looking sequences of the [CSIRO] Australia Telescope Compact Array telescopes at work, and I especially like the fish-eye sequences of the dishes nodding at each other as they scan the Milky Way. Great stuff,” commented David Malin.

All of the shortlisted and winning entries are included in a year-long exhibition at the CSIRO Parkes Observatory’s Visitors Centre from 20 July 2014. A second touring exhibition, organised by the Powerhouse Museum, will travel to selected venues beginning with Sydney Observatory in August 2014.

The David Malin Awards are run as part of the Central West Astronomical Society’s annual AstroFest. They are supported in 2014 by CSIRO, Canon Australia, Parkes Shire Council and Sydney’s Powerhouse Museum.

If you liked these photos, take a look at our previous post on the shortlisted entries in this year’s awards: ‘Catching stars’.

Entry to the Parkes Observatory Visitors Centre is free; it’s open daily from 8.30am to 4.15pm. For more information see www.csiro.au/parkes.