5 things you didn’t know about the Parkes radio telescope

5 things you didn’t know about the Parkes radio telescope

The Parkes radio telescope has become an icon and a symbol of Australian ingenuity. But here are 5 things you probably didn't know about the Dish. 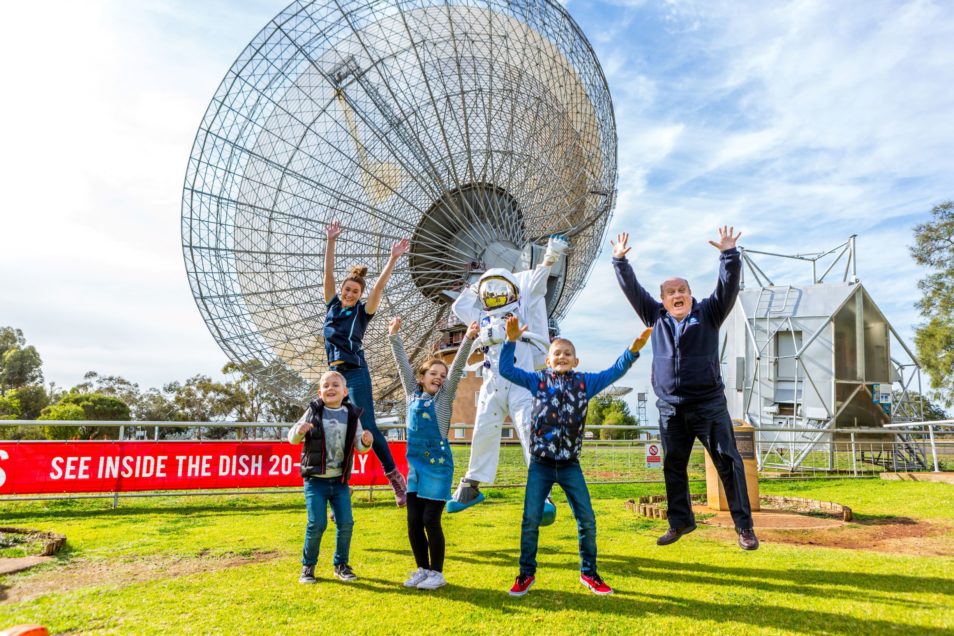 Three kids, two adults and a astronaut jump for joy in front of the Parkes 'Dish'.

Our Parkes radio telescope is an icon of Australian science. And the visitors centre is open to the public 7 days a week. Wahoo!

The Parkes radio telescope has become an icon and a symbol of Australian ingenuity. It is the subject of numerous photographs, was the subject of a blockbuster movie, The Dish, and played a key role in televising images of the Apollo 11 Moon landing on 20 July 1969. And that’s before we even get to the science.

“By almost any measure, the Parkes Radio Telescope is the most successful scientific instrument ever built in Australia. The telescope is unsurpassed in terms of the number of astronomers, both national and international, who have used the instrument, the number of research papers that have flowed from their research, and the sheer longevity of its operation (now over fifty years),” wrote Peter Robinson for the 50th anniversary of the telescope, in 2011.

So, here are five facts about the telescope that we bet you didn’t know:

1. It wasn’t always going to look that way

Built between 1959-1961, the Parkes Observatory was one of the first radio telescopes built as a big, movable dish. Its design now seems standard, but it certainly wasn’t inevitable. 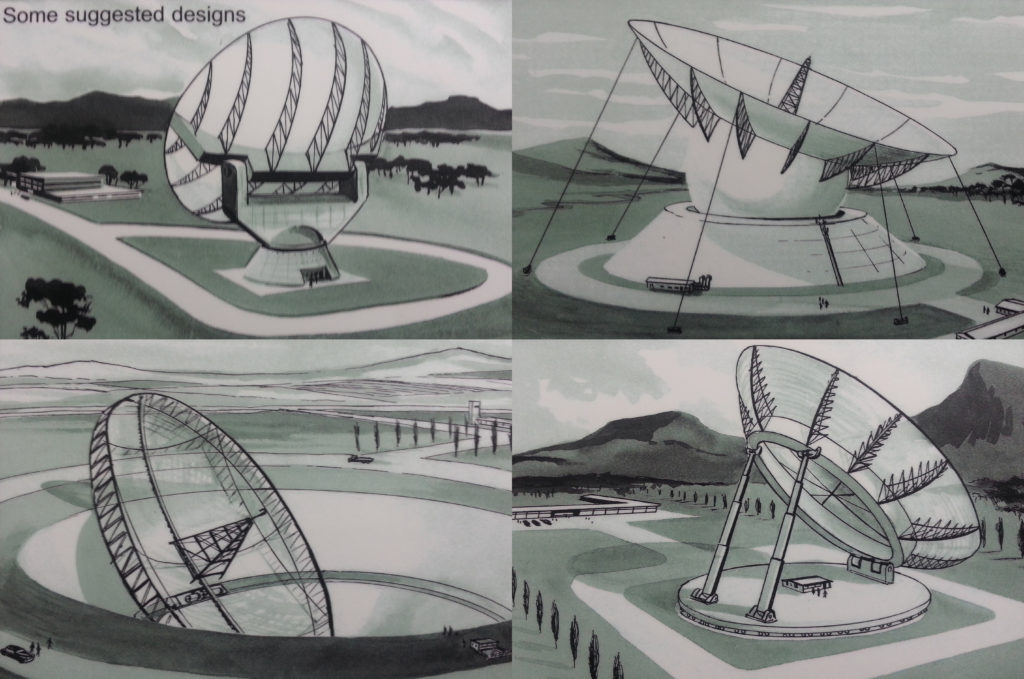 Four sketches of different designs for the Parkes radio telescope.

These are four of the designs put forward for the Parkes radio telescope in a 1955 booklet as the design went out to tender.

The radio telescope as we know it today took three years to design and two years to build. NASA subsequently used the same telescope design for the satellite tracking dishes of its Deep Space Network, building radio telescopes in Goldstone, Madrid and Tidbinbilla.

Over the last 51 years, the basic structure of the radio telescope has remained unchanged. However, the surface, control system, focus cabin, receivers, computers and cabling have all been upgraded. Some parts have been upgraded many times. The radio telescope is now 10,000 times more sensitive than when built in 1961.

2. The dish is not fixed to the top of its tower, but just sits on it

The moving part of the telescope weights 1000 tonnes – as much as two Boeing 747s – but it is not fixed to the tower, and instead sits atop it with its own weight holding it down.

Because the large surface catches the wind like a sail, if the wind exceeds 35 km per hour, it must be ‘stowed’, by pointing it directly up.

In this set up, it takes 15 minutes for the dish to do a 360 degree rotation, and five minutes to get to its maximum tilt of 60 degrees. Imagine the width of your finger, but held 150 metres away – this is how precise the Parkes radio telescope is when it rotates to point at something. (Astronomers would refer to this pointing accuracy as “better than 11 arcseconds”.)

3. The site was bought from a farmer named Australia 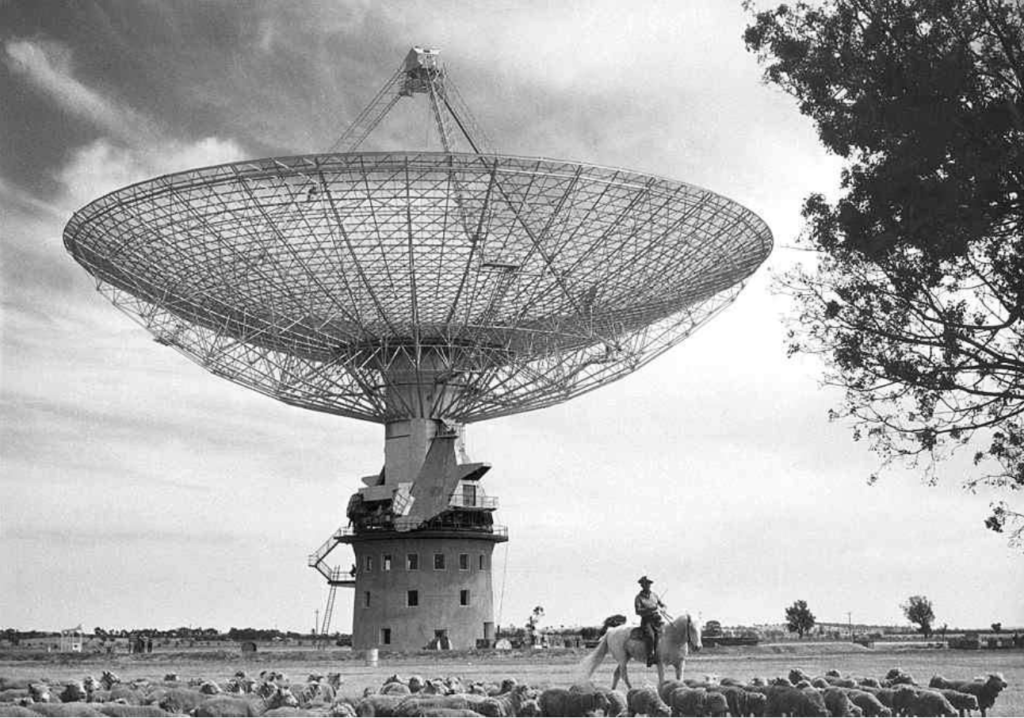 A black and white photo of a horseman and sheep in front of a big radiotelescope dish.

Australia ‘Austie’ Helm rounds up his sheep in front of the dish not long before it officially opened. Austie sold part of his farm to CSIRO to provide a site for the telescope.

Australia ‘Austie’ Helm (named as such because he was born on a special wartime Australia Day in July, 1915) was the owner of a 360 hectare property known as Kildare in the Goobang Valley. After the site of Parkes had been selected, negotiations began and, in the end, Austie sold 70 hectares to the CSIRO for the radio telescope.

The selection of the site took several years and had to fulfil several technical requirements, such as a stable geology and low radio interference. By 1956, there was a list of over 30 possible locations. The shortlist came down to two locations: a site close to Sydney in Cliffvale, at the foot of the Blue Mountains, or a site ‘over the mountains’ 20 km north of Parkes. The decision was made in favour of Parkes in March 1958.

4. It has listened for ET 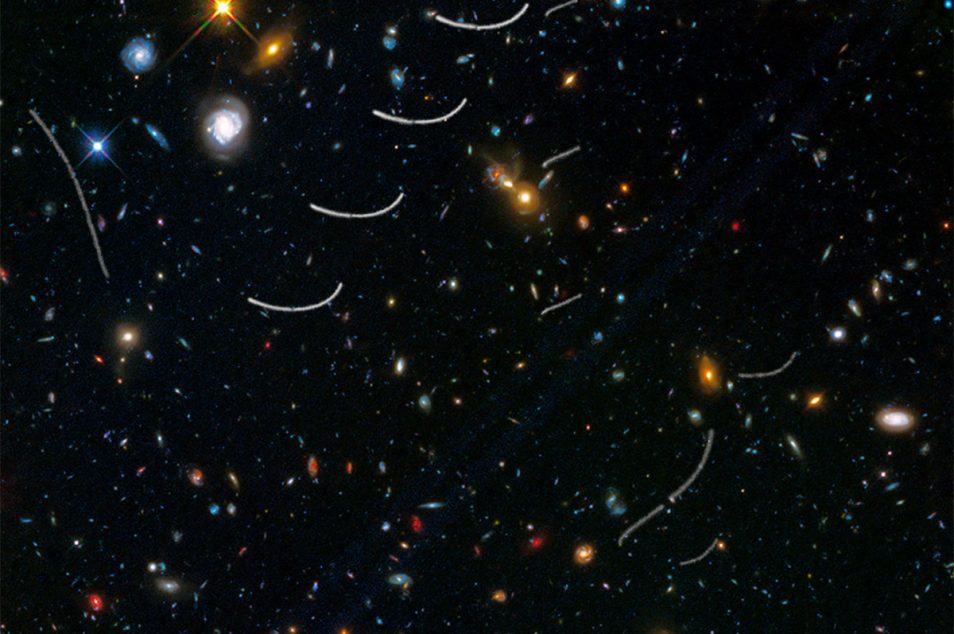 The shot from NASA’s Hubble Space Telescope shows the task ahead for scientists searching for extraterrestrial life. This image shows more galaxies, clusters, and space we can even attempt to comprehend. It contains thousands of galaxies, including massive yellowish ellipticals and majestic blue spirals. Much smaller, fragmentary blue galaxies are sprinkled throughout the field. The reddest objects are most likely the farthest galaxies. Asteroid trails appear as curved or S-shaped streaks. Image: NASA

The Parkes radio telescope was the first stop for US researchers from the SETI Institute in California when they launched Project Pheonix – a search for extraterrestrial intelligence by analysing patterns in radio signals of 800 nearby stars, similar to ours.

In February 1995, the researchers began a six-month observation of 200 nearby stars using the Parkes radio telescope.

What they were trying to do was quite complicated at the time: while most astronomers image objects at a single frequency or over a minuscule range of frequencies, the SETI researchers had to process an enormous range of frequencies – and in real time.

5. In the famous cricket scene from the The Dish, the actors used a tennis ball, not a cricket ball. 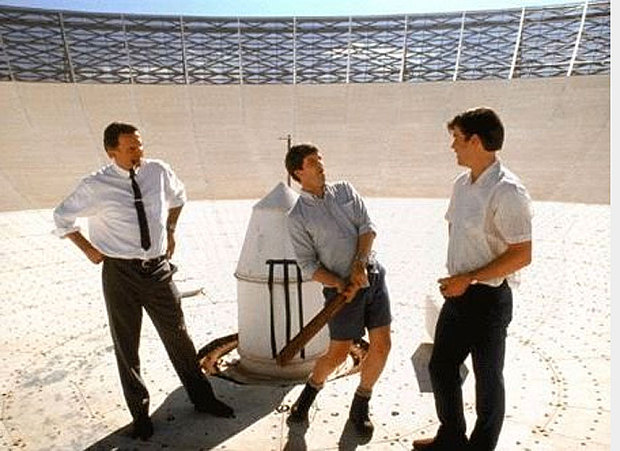 The now-famous scene from The Dish, where actors play cricket on the Parkes radio telescope.

The Dish is a 2000 Australian movie that tells a fictionalised version of the Parkes Observatory’s role in relaying live television of man’s first steps on the moon during the Apollo 11 mission in 1969.

One of the problems the directors had was how to convey the sheer size of the dish. That was when they came up with the idea of playing a game of cricket on it.

But, of course, a real cricket ball would damage the surface of the dish. It’s only a 1-2 mm difference from best-fit parabola over its surface, and cricket balls could easily dent the surface. The actors were given a soft tennis ball instead.

Do you swoon over the Moon? Learn about Australia's role in the Apollo 11 Moon landing!

Previous post:
RV Investigator’s weather research radar lifted into place!
Coming up next:
Controlling ‘those pesky wabbits’ on land and in water