Wormhole Wednesday: A decade of adventure on Mars

Wormhole Wednesday: A decade of adventure on Mars

To cap off World Space Week, today we have a guest post from Dr Paulo de Souza, OCE Science Leader at CSIRO Computational Informatics, and a Participating Scientist of the Mars Exploration Rover Project since 2002. 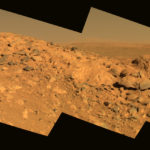 During her long ascent of the Columbia Hills, Spirit paused to survey the view from the Longhorn outcrop. The alignment of the four individual images in this small panorama reveals the slope of the terrain; when the rover is tilted, the mast assembly on which the cameras are mounted is also tilted. These Pancam images were acquired on Sol 210 (5 August 2004) as part of a large 360-degree panorama called Cahokia, named for a Native American archaeological site near St. Louis. Three different filters were used by Spirit to create this image (753nm, 535nm, and 432nm). Image credit: NASA/JPL/Cornell.

In just three months from now, if all continues to go well, we will be able celebrate the decade-long continuous operation of NASA’s rover Opportunity on Mars. Originally built to last just three months, Opportunity is now far beyond its warranty, and still exploring the cold surface of the red planet.

Right now, as we celebrate World Space Week, and its theme or ‘Exploring Mars, Discovering Earth’, we consider Mars as a place so similar to our own, but at the same time, totally alien. It calls to us like few other places as the next frontier for human exploration.

However, before we dare step on its reddish‐dusty surface, we need to future‐proof our astronauts, combating the problems they would deal with on the expedition, including:
•    almost one year of interplanetary trip to Mars (and then back again!);
•    The weak gravity (38% of our terrestrial gravity) would degenerate muscles and bones;
•    Massive dust storms with winds up to 400km/h;
•    Extreme temperature variations (from –100ºC to +10ºC every day);
•    Coping with a longer day (named Sol on Mars) of 24h 40min;

Not to mention communication challenges – there is, on average, a 20 minute delay caused by the time it takes for information to travel (at the speed of light) between Mars and the Earth. (Who could forget the ‘seven minutes of terror’ during the landing of the Mars Space Laboratory in August last year?)

By the way, did you know that one-third of all data coming from the rovers on Mars are captured by dishes at our Canberra Deep Space Communication Complex? The Complex also handled the vital communication link to both Spirit and Opportunity for their 2004 landings, as well as Curiosity’s historic touchdown last year.

Below you will see two amazing galleries of photos which, for me, are some of the highlights of the Spirit and Opportunity missions so far. 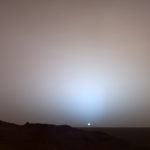 A stunning view of the Martian sunset as viewed from the flank of Husband Hill (named after the Columbia Shuttle Bus). This iconic view from the Spirit rover shows the rim of Gusev crater some about 80 km distant and is reminiscent of sunsets on the Earth, thereby serving as a reminder that the surface of other planets can sometimes seem very familiar. This sublime scene also captures some important scientific information. For example, sunset and twilight images are occasionally acquired to determine how high into the atmosphere the Martian dust extends, and to look for dust or ice clouds The false color panorama of the western sky was obtained using Pancam’s 753nm, 535nm and 432nm filters (L257) and was taken by the Pancam camera in the evening of sol 489 (May, 19, 2005). Credit: NASA/JPL/Texas A&M/Cornell. 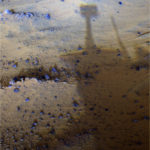 This Panorama camera frame was taken by Spirit while traversing down the southern slopes of Husband Hill. Spirit was able to take advantage of Mars summertime solar power levels to occasionally take photos late in the day, when the low Sun illumination provided opportunities for more dramatic, higher contrast imaging. In this Pancam false color example, acquired around 5:30 in the afternoon on Spirit sol 606 (Sept. 16, 2005), the rover itself and its Pancam Mast Assembly cast a long shadow across the rocky landscape. This false color RGB image was made using Pancam’s 753 nm, 601 nm, and 432 nm (L247) filters. Image credit: NASA/JPL/Cornell. 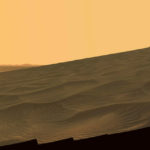 This is an approximate true color rendering of the “El Dorado” dune field explored by Spirit over the 2006 New Year’s holiday weekend. The approximate true color view spans about 160 degrees in azimuth and consists of 66 Pancam images acquired on Spirit sols 708 and 710 (Dec. 30, 2005 and Jan. 1, 2006) through the 753nm, 535nm, and 432nm (L257) filters. Spirit spent several days acquiring images, spectral data, and compositional and mineralogic information on this large basaltic sand sheet before beginning to move further downhill to the south towards “Home Plate.” Image credit: NASA/JPL/Cornell. 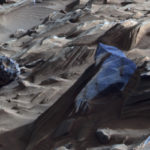 During the traverse on and around the ancient Home Plate volcanic feature, Spirit took numerous images of both finely-layered and more “frothy” vesicular volcanic rocks. Several lovely examples of these kinds of rocks can be seen in this Pancam false color image consisting of two frames and acquired around 4:20 in the afternoon on Spirit sol 758 (Feb. 19, 2006). Pancam’s 753 nm, 601 nm, and 535 nm (L245) filters were used to make this false color RGB mosaic. Image credit: NASA/JPL/Cornell. 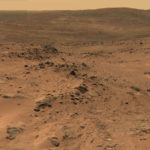 This Spirit Pancam “Everest” panorama was acquired on sols 620 to 622 (October 1 to 3, 2005) from a position in the Columbia Hills at the true summit of Husband Hill. The summit region is a broad plateau about 100 meters (300 feet) above the surrounding plains of Gusev crater, consisting mostly of outcrop of rocks and windblown drifts. The distant view in the center of this mosaic is looking from the summit into the South Basin, the region where Spirit later drove. The panorama consists of 81 frames and is an approximate true color rendering generated using the images acquired through Pancam’s 750, 530, and 430 nm (L257) filters and the view is clear enough to see extremely faint features as far away as the rim of Gusev crater (80 km or 50 miles away), Amazingly, several large dust devils can also be seen in this image, just right of center and partially silhouetted against the horizon. Image credit: NASA/JPL/Cornell.

Spirit landed at Gusev Crater on Mars on 2 January 2004. Opportunity (below), her twin sister, landed at Meridiani Planum (the other side of Mars) three weeks after. 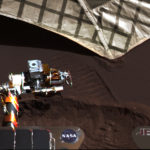 This is an approximate true color rendering of a merged Navcam and Pancam mosaic of a trench dug by the Opportunity rover wheels into the sandy soils of Eagle crater. The trench was dug on Sol 55 (March 20, 2004) to explore the nature of small wind ripples near the center of the crater, right next to the Opportunity lander. The white material at the top is the fabric ramp used by the rover when it drove off the lander. The robotic arm instruments, glistening in the martian sunlight, are preparing to make measurements inside the trench. The approximate true color multi-frame mosaic was made using Pancam’s 753 nm, 535 nm, and 432 nm (L257) filters. Image credit: NASA/JPL/Cornell. 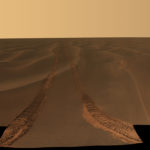 The rover tracks disappear towards the northern horizon of the Meridiani Plains in the “Rub Al Khali” Pancam panorama. The rover tracks appear like the wake of a ship across the desolate sea of sand between the craters Endurance and Victoria. The image is part of a panorama of 97 images that was acquired by the on Opportunity on sols 456 to 464 in May of 2005 using filters at 750 nm, L5 530 nm, 480 nm (L257) while the rover was stuck in the sand-ripple “Purgatory” for over a month. The panorama shows the approximate true color of Mars and was named “Rub Al Khali” after the “Empty Quarter” in the arabian desert. Image Credit: NASA/JPL/Cornell 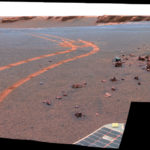 The Opportunity rover acquired this enhanced-color mosaic on Sol 1162 (May 1, 2007) using Pancam’s 753 nm, 535 nm, and 432 nm (L257) filters. This was taken near a small crater named Granada (visible above and to the right of the rover’s solar panel). The rover tracks show how Opportunity drove from the rim of Cape St. Vincent (at Victoria Crater) and independently drove by Granada and its ejecta blocks using new hazard avoidance software. Image Credit: NASA/JPL/Cornell. 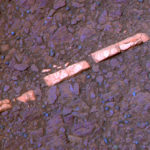 This false-color view of a mineral vein called “Homestake” comes from Pancam on Opportunity. The vein is about the width of a thumb and about 18 inches (45 centimeters) long. Opportunity examined it in November 2011 and found it to be rich in calcium and sulfur, possibly the calcium-sulfate mineral gypsum. “Homestake” is near the edge of the “Cape York” segment of the western rim of Endeavour Crater. Exposures combined into this multi-frame view were taken through Pancam filters 753 nanometers, 535 nanometers, and 432 nanometers (L257) filters. The images were taken during the 2,769th Martian day, or sol, of Opportunity’s mission Mars (Nov. 7, 2011 and is presented in false color to make some differences between materials easier to see. Image credit: NASA/JPL/Cornell University/Arizona State University. 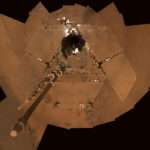 This self-portrait from NASA’s Mars Exploration Rover Opportunity shows dust accumulation on the rover’s solar panels as the mission approached its fifth Martian winter. The excessive dust reduces the rover’s energy production. This is a vertically projected mosaic of images taken by Opportunity’s panoramic camera (Pancam) during the 2,811th to 2,814th sols of the rover’s mission (Dec. 21 to Dec. 24, 2011). Image Credit: NASA/JPL-Caltech/Cornell/Arizona State University.

Spirit and Opportunity have completely changed our understanding of the red planet.

They have shown scientists clear evidence of past watery environments on Mars that may have been suitable habitats for life. They have trekked across a surface that has shown a wide diversity of terrain types, from hills and valleys, to broad sandy plains and vast, deep craters. They have survived massive dust storms and freezing temperatures, sand traps, cosmic ray strikes and the odd computer glitches.

Essentially they have faced many similar trials to those that may be experienced by future human explorers, and have come out the other side of these events and still kept roving.

Eventually, time and weary wheels will stop this amazing adventure (Spirit succumbed to the Martian winter in 2010), but for now Opportunity keeps on exploring. It is setting the bar for future explorers, both mechanical and perhaps one day, human.

It is an adventure that is worth noting at the close of World Space Week and that will be worth continuing following, hopefully, for years to come.

Check back on the CSIRO Universe blog for future updates, particularly as we celebrate the Mars rovers 10th anniversary in January 2014.

*Dr Paulo de Souza is an OCE Science Leader with CSIRO Computational Informatics (CCI). He is a collaborating scientist on NASA’s Mars Exploration Rover mission, which landed and operates two large robots, Spirit and Opportunity, on the surface of Mars. Read more about our Sensors and Sensor Networks research.

Previous post:
‘Virtual changerooms’ coming soon to a smartphone near you
Coming up next:
Container-ing your excitement!