Welcome to the Ashmore Reef Marine Park. This remote sanctuary is brimming with life, above and below the water. Each year around 100,000 seabirds breed here! 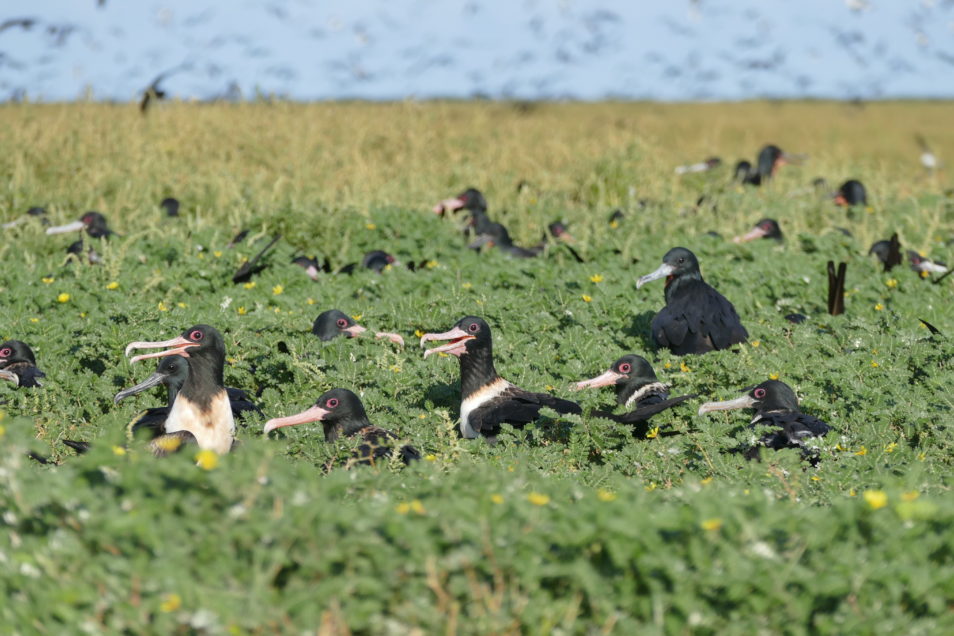 Around 100,000 birds breed on the islands in Ashmore Reef Marine Park every year, including these Lesser Frigatebirds. (Image: Parks Australia)

Around 100,000 birds breed on the islands in Ashmore Reef Marine Park every year, including these lesser frigatebirds. (Image: Parks Australia)

It’s sunset on the Ashmore Reef Marine Park. Three tiny islands and a vast marine estate make up this remote oasis. Ashmore Reef lies 630 kilometres north of Broome in Western Australia. Hundreds, if not thousands, of birds circle overhead. They’re getting ready to nest for the night. The sound of their calls (and the smell of their guano!) fill the air.

Underwater, the coral reef is teaming with life. There are turtles, sharks, the occasional dugong, and a kaleidoscope of coral and colourful fish. If you dipped your head under, you’d see an endless forest of hard and soft corals and sponges. 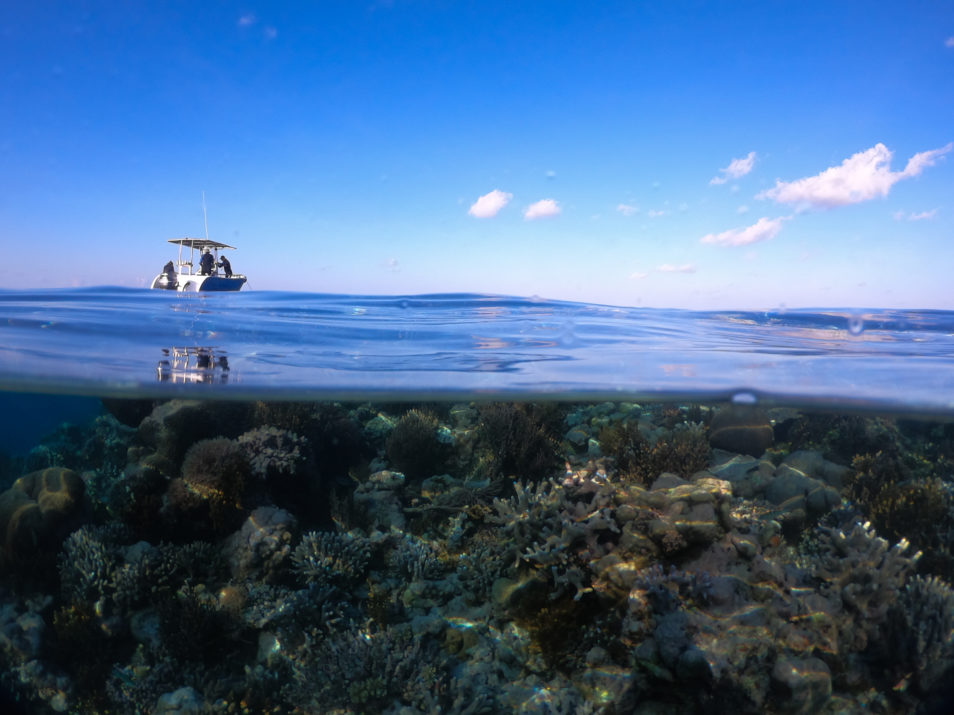 Ashmore Reef Marine Park is one of Australia’s most remote marine parks. Closer to Indonesia than mainland Australia, it’s a tricky place to get to. This makes it a hard place to survey, track and manage. Out here, working together is an absolute necessity.

In 2019, Parks Australia brought together a science team to undertake one of the biggest health checks of Ashmore Reef. Our scientists, along with researchers from the University of Western Australia, and other marine park managers left Broome and travelled by boat to the very edge of our continent. Over two voyages the team completed both marine and land-based surveys, collecting a range of data (you can see the results of the survey here). 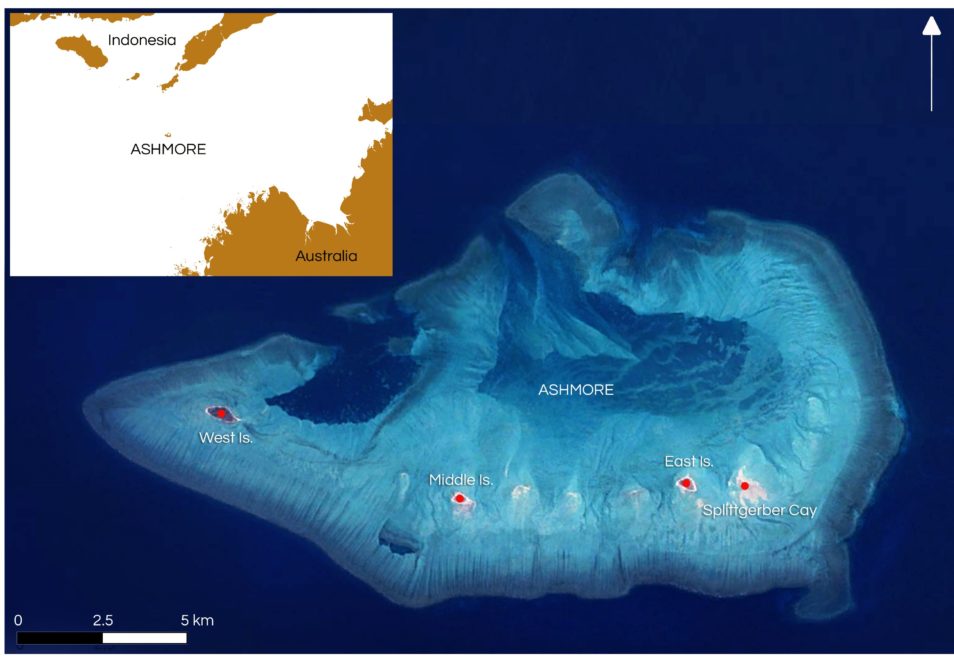 One of our scientists, Dr John Keesing, was part of this research team. John was the marine biologist leading the underwater surveys. He said it’s important for Marine Parks to be surveyed every few years to make sure that environmental values are being conserved.

“Understanding how an environment is changing over time is important for management, allowing us to identify impacts and possible interventions,” he said.

Michelle Glover, from Parks Australia, is the marine park manager responsible for looking after this biodiversity hotspot.

“It’s definitely a challenge. The park, although quite small compared to our other Australian Marine Parks, covers 583 square kilometres and many different habitats, from the sandy interiors of the islands to seafloor habitats at depths of 500 metres. Science partnerships are key to understanding and protecting this special place,” she said.

Dr Bruce Webber led the terrestrial team that looked at the plants and animals on the islands.

“We wanted to understand what species were on the Ashmore Reef islands, and how they’re interacting. Interactions are the glue that hold ecosystems together – the more we understand these interactions, the better our management will be,” he said.

Let’s take a closer look at the work the team did! 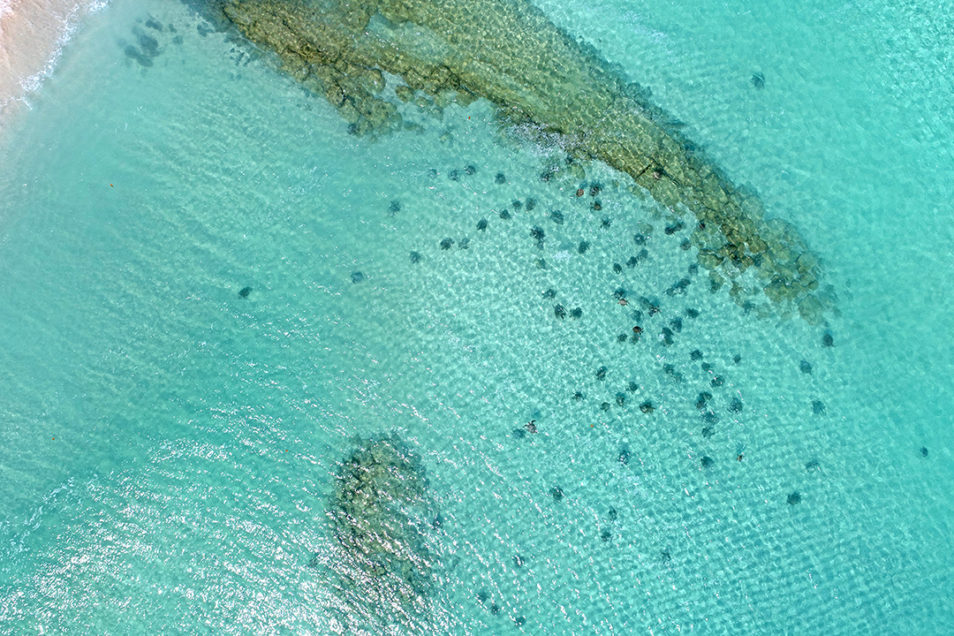 What did we sea? The marine life of Ashmore Reef

But wait, there’s more! Ashmore Reef has what’s thought to be the greatest number of reef-building coral species of any reef area off of the Western Australian coast. It has about 255 species!

At one time, you would have seen sea snakes on the reef. Historical data shows Ashmore Reef used to be a global sea snake hotspot, supporting a 40,000 strong population from at least 13 species. These days, you’re unlikely to see one. The reason why remains a mystery and continues to puzzle biologists and marine park managers. Explaining this vanishing act is just one of the questions we aimed to answer with the data collected on this voyage. 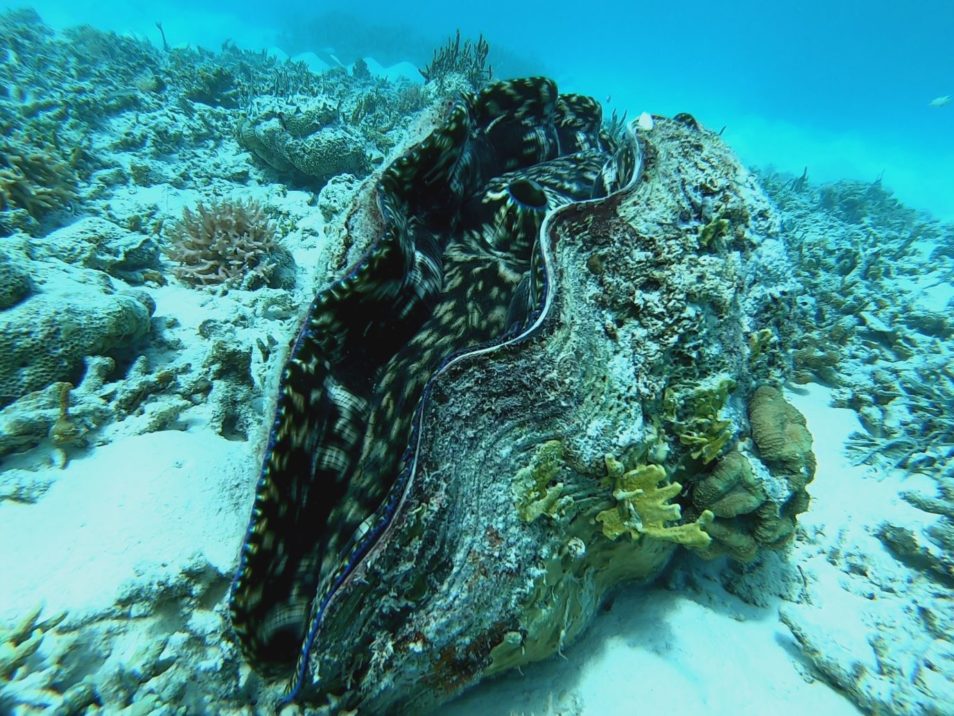 The giant clam is thought to be close to local extinction at Ashmore Reef. This bottom-feeding giant is the largest living bivalve mollusc. It can weigh more than 200 kg and can live to over 100 years. (Image: CSIRO)

In this project we focused on the habitats fringing the islands, especially the coral reefs. It’s a vast area, so how did we do it?

Our scientist completed surveys day and night (with the help of spotlights!). We did snorkel and walking surveys, used eDNA surveys to search for those hard-to-spot species, and something called a ‘manta tow’. Scientist Daniela Ceccarelli describes what this is.

“A manta tow is where a snorkeler is towed behind a boat [and makes visual assessments of the reef which they record on waterproof paper]. This allows us to cover very, very large areas so we get a sense of the health of the reef overall,” she said. “We also get a chance to survey for animals that might be more sparse, like sea snakes, dolphins and sharks.” 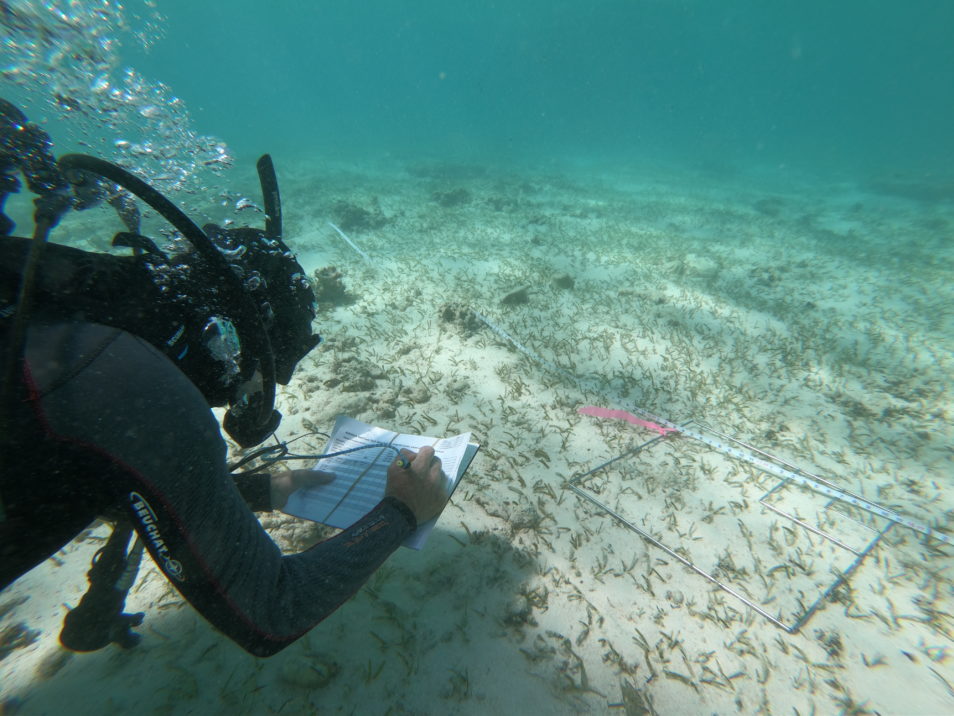 Dr Russ Babcock is one of our marine biologists and a Senior Principal Research Scientist.

“It was really pleasing to see that Ashmore Reef has really high coral cover in many places and that the corals were’nt showing any signs of recent bleaching,” Russ said.

“The were looking really healthy with no signs of disease and very few coral predators. So the future looks pretty good for the near term for this reef.”

To survey the coral, we took photos along a line (transect), and then analysed them back in the lab. This analysis told us what the coral species were, and how much coral was there.

“That approach gives us an estimate that was quite precise. We have then used that insight to estimate any change that might occur in the future,” he said. 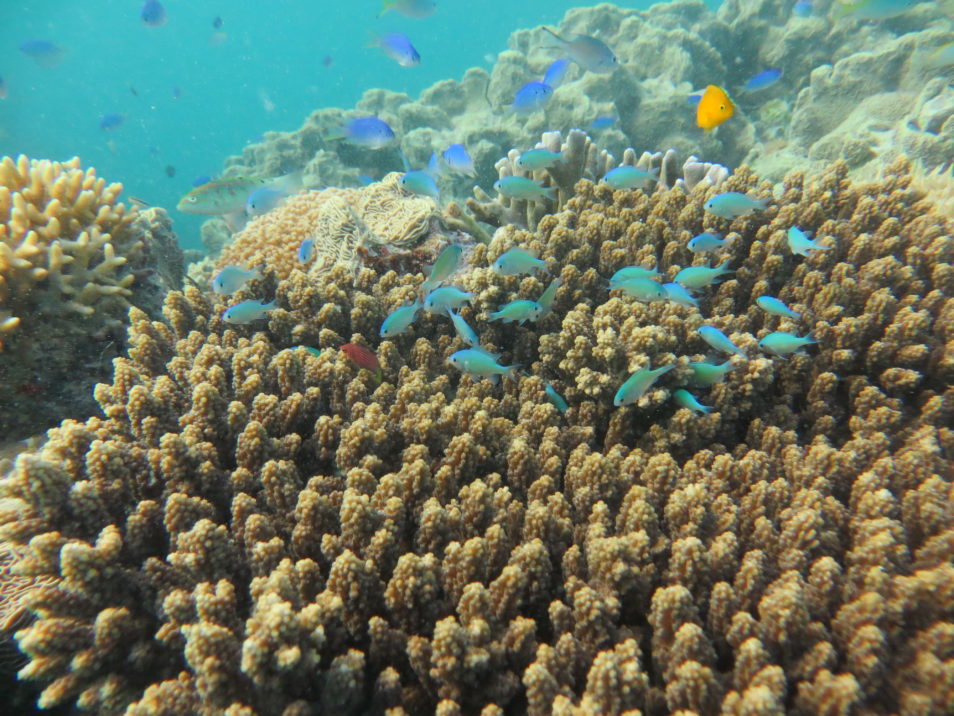 There are over 500 species of fish in the Ashmore Reef Marine Park. (Image: CSIRO)

Birds of a feather, flock in thousands together

Each year around 100,000 seabirds cram together on Ashmore’s islands to breed. They squish together on a total land area of only 56 hectares. Fifteen species have been observed breeding there, including crested terns, red-tailed tropicbirds and great frigatebirds. The islands also provide an important staging point for migratory shorebirds, allowing them to rest and feed before continuing their long journeys between Europe and Australia. The islands have been listed as an important bird area and a Ramsar wetland site.

Together with the University of Western Australia, we flew drone missions to take photos of the birds from above. We also used traditional methods like cameras, binoculars and spotting scopes. By comparing the two techniques we were able to improve the quality of our bird surveys, while still being able to use past data to understand trends over time. 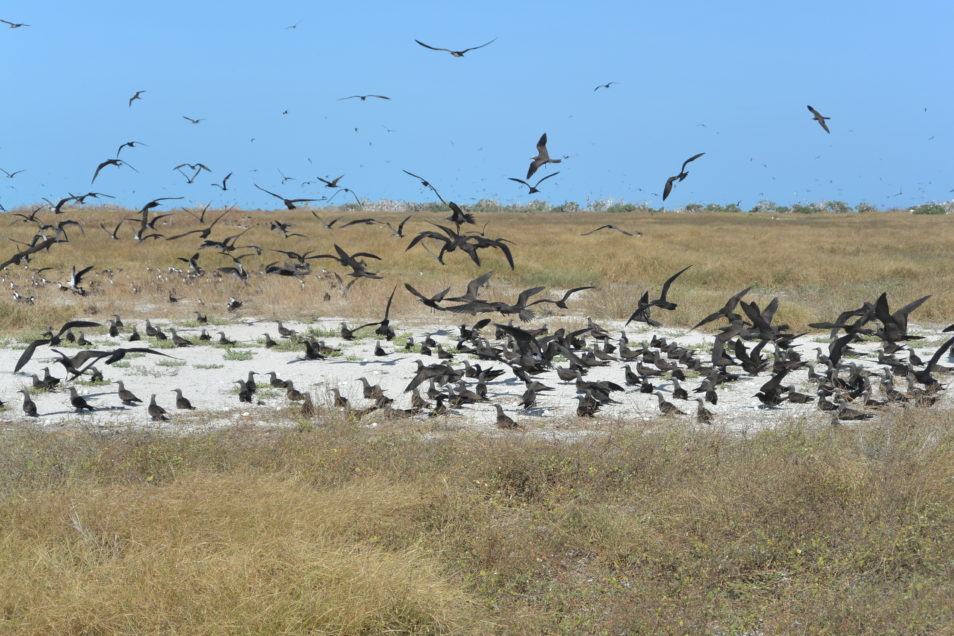 Separating the greens (and browns) on Ashmore Reef’s islands

We surveyed plants big and small. The three sandy islands and a small cay are home to grasses, herbs, shrubs and the occasional tree. We used high-resolution photos and laser mapping from drones to survey the islands, identify plants, and to create the first map of Ashmore Reef’s plants and plant communities. For the first time, we know where the plants are and how abundant each species is.

Dr Bruce Webber said the team has found concerning changes in these islands.

“We’ve discovered one of the few tree species has almost died out and others are in decline. The huge number of nesting birds appear to be loving the sea trumpet tree to death, to the point where there is now only one individual left,” he said. 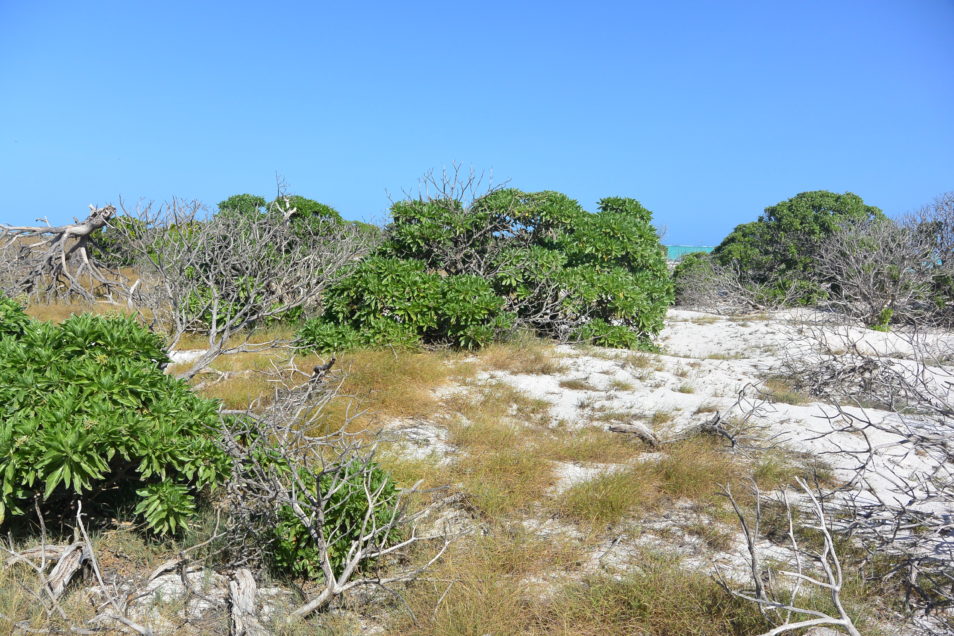 The plants on Ashmore’s islands provide important nesting habitat for many seabirds and other animals. (Image: CSIRO)

You’re not from around here! Introduced pests and weeds

It is likely that one of the biggest threats to the biodiversity at Ashmore Reef are the introduced pests and weeds. These have arrived with people visiting the islands over the years, and some have now established. Across the islands, we surveyed the introduced ants, geckos and plants. Some of these, like tropical fire ants and buffel grass, cause significant problems elsewhere.

Our work has generated detailed knowledge on where these introduced species are at Ashmore Reef and the impacts they are having. This insight means we are now better placed to guide Parks Australia on what control programs will be the most effective. 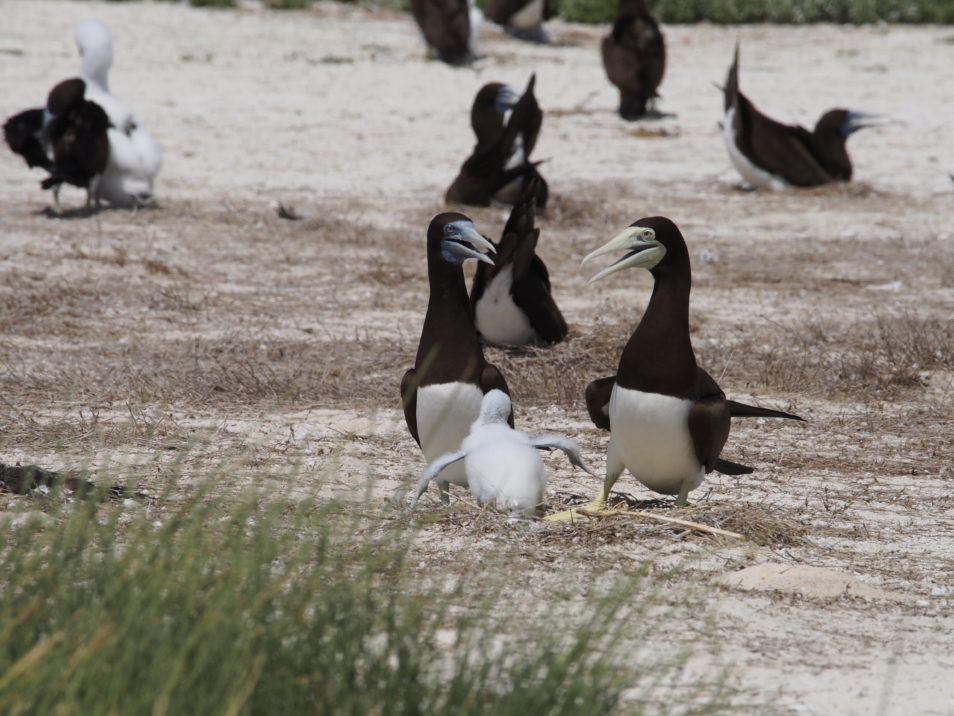 Show descriptionHide description
Call to action: So what treasures did we find on the two voyages?