Together with our research partners, we have given scientific names to 150 new species in the past year.

Valued between $3 and $29 billion, Australia’s biodiversity is incredibly important to understand and protect. Giving scientific names to species enables this.

RuPaul now has a soldier fly named Opaluma rupaul. It belongs to a new group of Australian soldier flies called Opaluma, from the Latin words for opal and thorn. This name reflects their iridescent colours and also the thorn on the underside of their abdomens.

Three Pokemon – Articuno, Zapdos and Moltres – inspired the names of three beetles: Binburrum articuno, Binburrum zapdos and Binburrum moltres. The beetles and the Pokemon are both hard to find.

Digmon is a fictional insect in the Japanese anime TV series Digimon Adventure. It inspired the name of a new cycad-boring weevil, Demyrsus digimon. The animated Digmon possesses the power of drilling and manipulating the earth. Similarly, the weevil can bore into the hard trunks of cycads.

Fabulous names are fun but also important. For example, names can help people notice tiny creatures like soldier flies, which are important in nature. The larvae recycle nutrients from dead plants and animals, and the adults pollinate Australian plants.

“Many of them live in areas impacted by the Black Summer bushfires,” Bryan said.

“Two of my new flies, Opaluma opulens and Antissella puprasina, have now been recognised as endangered species. They are known only from Lamington National Park in Queensland, which was severely burned in the bushfires.”

It might not be surprising to learn that tiny flies and beetles can be new to science. But a 20-metre-tall tree?

Previously known about (but without a scientific name), Pandanus grayorum is the new name of a tree from the Wet Tropics south of Cairns. It produces 40 centimetre long, orange-coloured fruit. It. Together with Pandanus gemmifer, these are the only Australian Pandanus species known to reproduce by growing plantlets, or pups, on their upper branches.

Other newly-named plants include two orchids from South Australia and Victoria: Pterostylis jeanesii and P. peakallana.

A collaborative study of all Australian species of perchlets in the genus Plectranthias stemmed from the discovery of a new fish species by scientists onboard Research Vessel Investigator in 2017. As a result, the researchers named four new species.

Most Plectranthias are small, rockcod-like fishes that inhabit rocky and coral reefs. They live in shallow waters to depths of around 500 metres. Because of their size and preference for rugged habitats, divers are unlikely to see these fish and trawlers are unlikely to catch them. Telling the different species apart is difficult, requiring X-rays of the skeleton and fins as well as DNA analysis.

The researchers named the species found on board RV Investigator the Rusty Perchlet, Plectranthias ferrugineus, from a Latin word for rust-coloured. 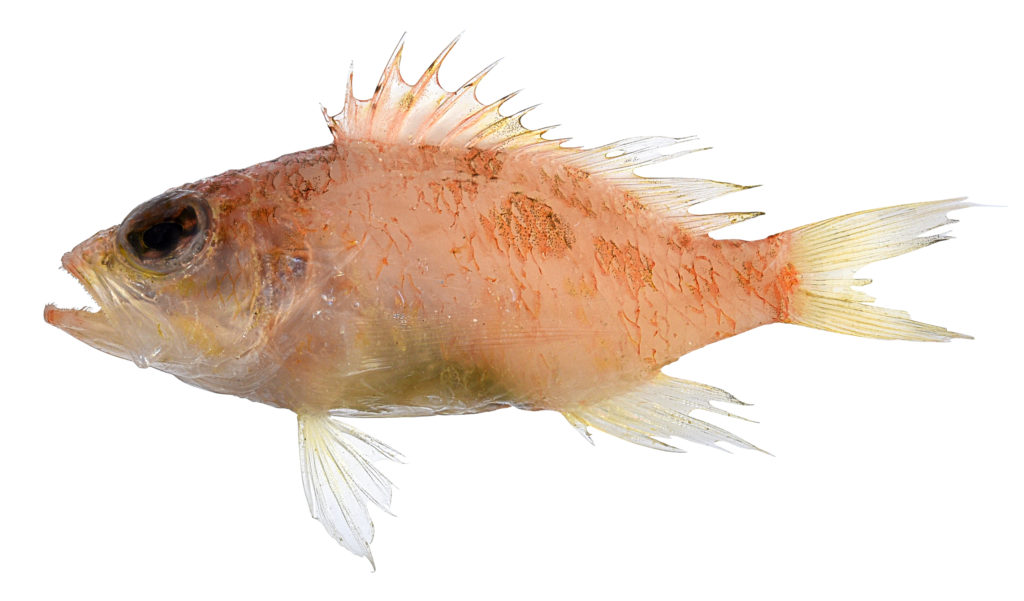 We also named a new species of ciliate, Vaginicola collariforma. It lives in a symbiotic relationship with the already known diatom species Palmerina ostenfeldii, in Australia’s tropical waters.

The ciliates colonise slits in the diatom and resemble a necklace, hence the name collariforma. They wave their thread like projections, or cilia, to enable the non-motile diatom to move like a Ferris wheel. This unique duet may become a bioindicator of warming of coastal waters moving southwards.

Before this year, researchers knew of only one species of smoothhound or gummy shark in the northern Indian Ocean.

“We also confirmed the presence of a third species, Mustelus stevensi. When we described and named it in 2008, we thought it was endemic to Western Australia,” Will said.

“But we now know it also lives in both Indonesia and the Andaman Sea. It’s an important food fish species in some regions, so it’s important to know which species are being caught to be able to better manage and conserve the species.”

CSIRO acknowledges the many research partners involved in collaborative projects to describe and name the new species featured here and the Traditional Owners of the lands on which they occur.

Fly over to a virtual tour of our insect collection

Previous post:
We’re giving it our best shot with vaccine selfies
Coming up next:
We analysed data from 29,798 clean-ups around the world to uncover some of the worst litter hotspots