Explainer: what happens when magnetic north and true north align?

Explainer: what happens when magnetic north and true north align?

Recently, magnetic compasses at Greenwich pointed directly at true north for the first time in 360 years. This is currently happening in Western Australia too. But what does it mean?

Very rarely, depending on where you are in the world, your compass can actually point to true north. Image: Shutterstock

At some point in recent weeks, a once-in-a-lifetime event happened for people at Greenwich in the United Kingdom.

Magnetic compasses at the historic London area, known as the home of the Prime Meridian, were said to have pointed directly at the north geographic pole for the first time in 360 years.

This means that, for someone at Greenwich, magnetic north (the direction in which a compass needle points) would have been in exact alignment with geographic north.

Geographic north (also called “true north”) is the direction towards the fixed point we call the North Pole.

Magnetic north is the direction towards the north magnetic pole, which is a wandering point where the Earth’s magnetic field goes vertically down into the planet.

The north magnetic pole is currently about 400km south of the north geographic pole, but can move to about 1,000km away. 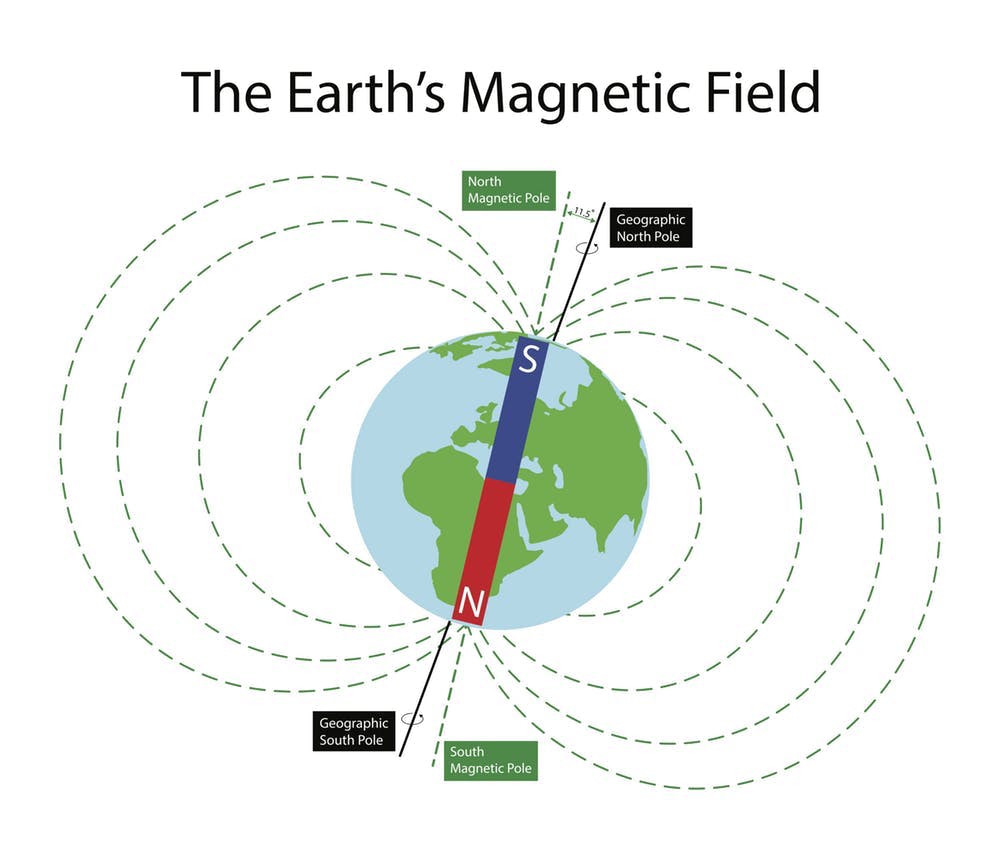 How do the norths align?

Magnetic north and geographic north align when the so-called “angle of declination”, the difference between the two norths at a particular location, is 0°.

On a map of the Earth, lines along which there is zero declination are called agonic lines. Agonic lines follow variable paths depending on time variation in the Earth’s magnetic field. 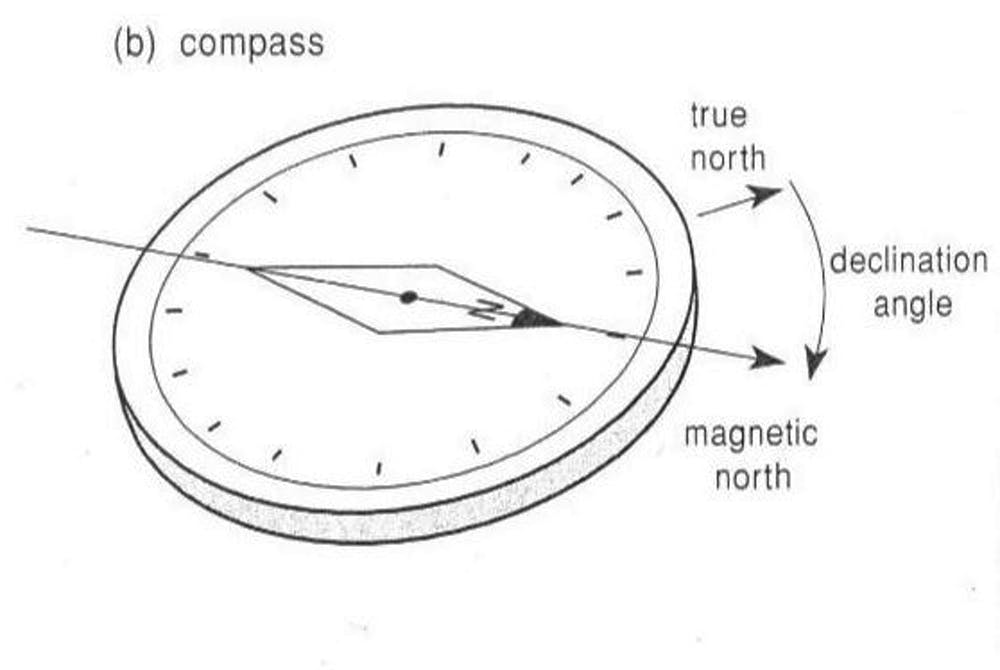 Currently, zero declination is occurring in some parts of Western Australia, and will likely move westward in coming years.

That said, it’s hard to predict exactly when an area will have zero declination. This is because the rate of change is slow and current models of the Earth’s magnetic field only cover a few years, and are updated at roughly five-year intervals.

At some locations, alignment between magnetic north and geographic north is very unlikely at any time, based on predictions. 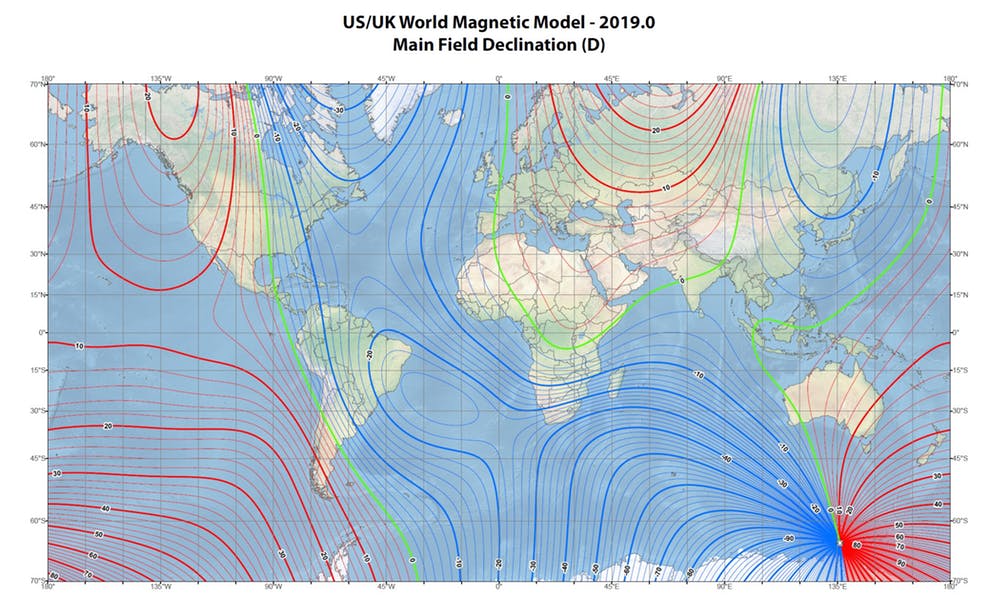 Locations on this 2019 map with a green contour line have zero declination. Lines along which declination is zero are called agonic lines.

Most compasses point towards Earth’s north magnetic pole, which is usually in a different place to the north geographic pole. The location of the magnetic poles is constantly changing.

Earth’s magnetic poles exist because of its magnetic field, which is produced by electric currents in the liquid part of its core. This magnetic field is defined by intensity and two angles, inclination and declination.

Bush walkers have to be mindful of declination. In Perth, declination is currently close to 0° but in eastern Australia it can be up to 12°. This difference can be significant. If a bush walker following a magnetic compass disregards the local value of declination, they may walk in the wrong direction.

The polarity of Earth’s magnetic poles has also changed over time and has undergone pole reversals. This was significant as we learnt more about plate tectonics in the 1960s, because it linked the idea of seafloor spreading from mid-ocean ridges to magnetic pole reversals.

Geographic north, perhaps the more straightforward of the two, is the direction that points straight at the North Pole from any location on Earth.

When flying an aircraft from A to B, we use directions based on geographic north. This is because we have accurate geographic locations for places and need to follow precise routes between them, usually trying to minimise fuel use by taking the shortest route. All GPS navigation uses geographic location.

Geographic coordinates, latitude and longitude, are defined relative to Earth’s spheroidal shape. The geographic poles are at latitudes of 90°N (North Pole) and 90°S (South Pole), whereas the Equator is at 0°.

An alignment at Greenwich

For hundreds of years, declination at Greenwich was negative, meaning compass needles were pointing west of true north.

At the time of writing this article I used an online calculator to discover that, at the Greenwich Observatory, the Earth’s magnetic field currently has a declination just above zero, about +0.011°.

The average rate of change in the area is about 0.19° per year, which at Greenwich’s latitude represents about 20km per year. This means next year, locations about 20km west of Greenwich will have zero declination.

It’s impossible to say how long compasses at Greenwich will now point east of true north.

Regardless, an alignment after 360 years at the home of the Prime Meridian is undoubtedly a once-in-a-lifetime occurrence.

Previous post:
Chemical romance: our sparkling superstar of STEM
Coming up next:
Do you have the low-down on low-carb? Take our quiz