Chris La Rosa is the first educator from the Torres Strait we've had on our research vessel Investigator. Dive into his adventures on the high seas. 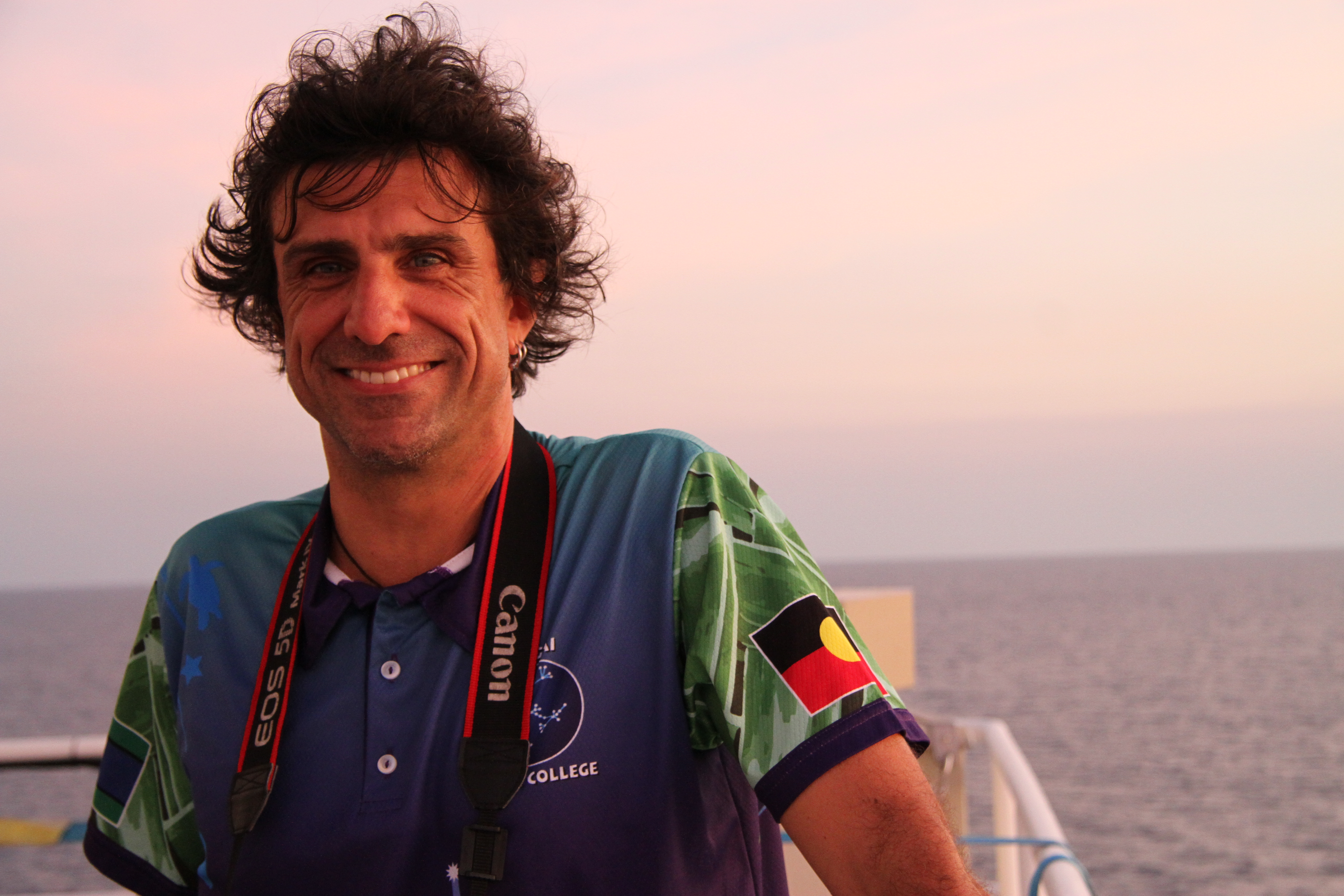 Educator on board: Teacher Chris La Rosa soaked up sunsets and science on our ship.

“When you are 260 kilometres offshore, surrounded by an expanse of featureless blue waters, it’s hard not to wonder what lies beneath you.”

That’s exactly where Chris La Rosa found himself onboard our research vessel Investigator. He has travelled on our science ship as part of our Educator on Board program. It’s a professional learning program for Aussie school teachers to experience some real-life science in a unique environment.

Along with another teacher, Greta Creed from North Lakes State College in Queensland, Chris recently arrived in Darwin from Brisbane. The teachers were part of a voyage to uncover submarine canyons and landslides along the Queensland coast. It aimed to help us understand how and when the Great Barrier Reef formed. This was one of a diverse collection of research projects on the voyage. 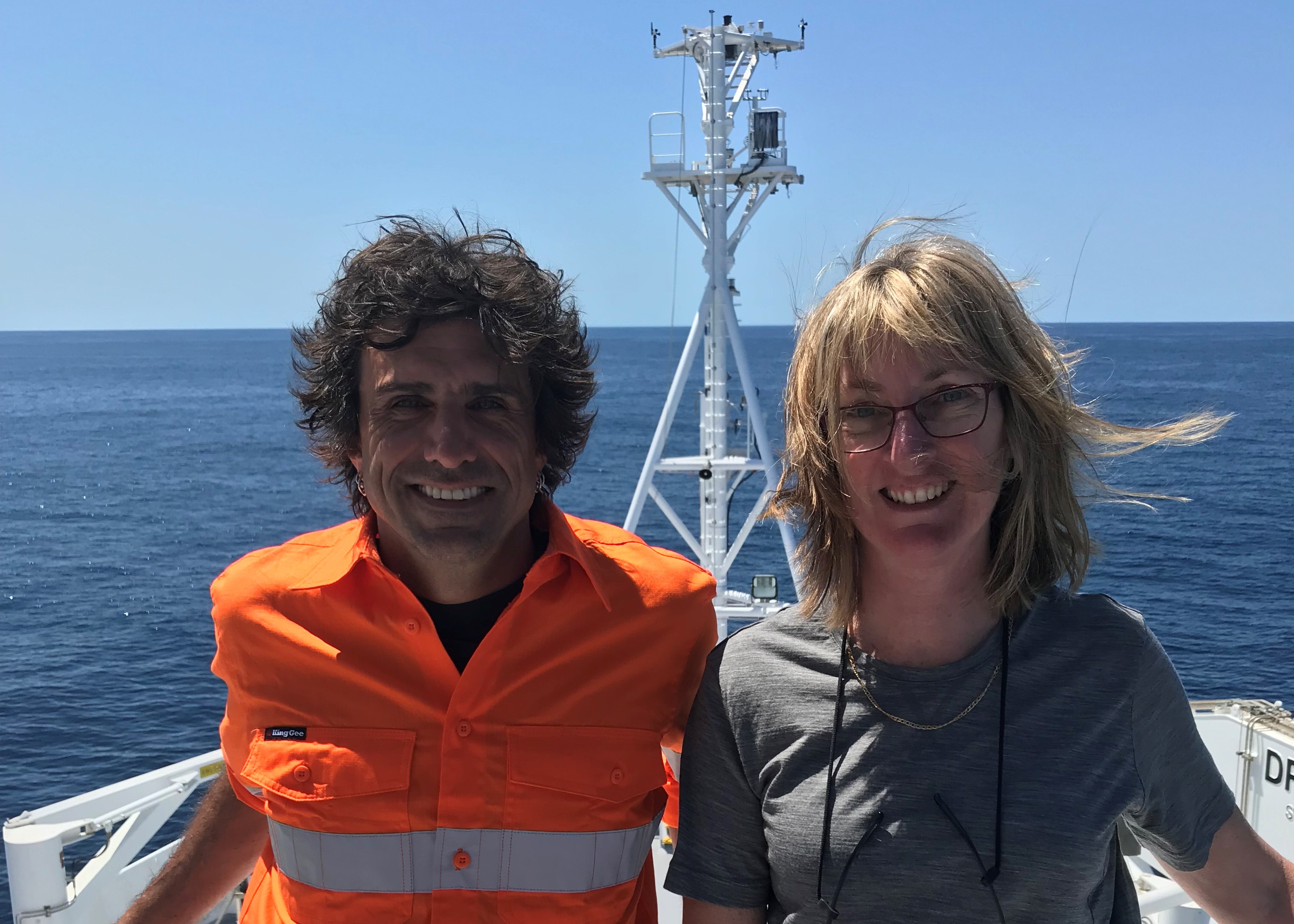 Chris and Greta having a whale of a time!

Chris teaches at Tagai State College in the Torres Strait and he’s the first participant in the program from the region. The school has a catchment area of 48,000 square kilometres which is huge!

“I live on Thursday Island where I work as a writer of science curriculum and teach conservation and land management. Previously I was the Head of Science at the Secondary School on the island where I taught biology, aquatic practices and general science across the year levels.”

“I’m excited about being involved in real, frontline science and bringing that to the wider community,” Chris told us.

Chris has been journaling his experiences from the vessel as an Educator on Board. Here are some highlights from his entries. 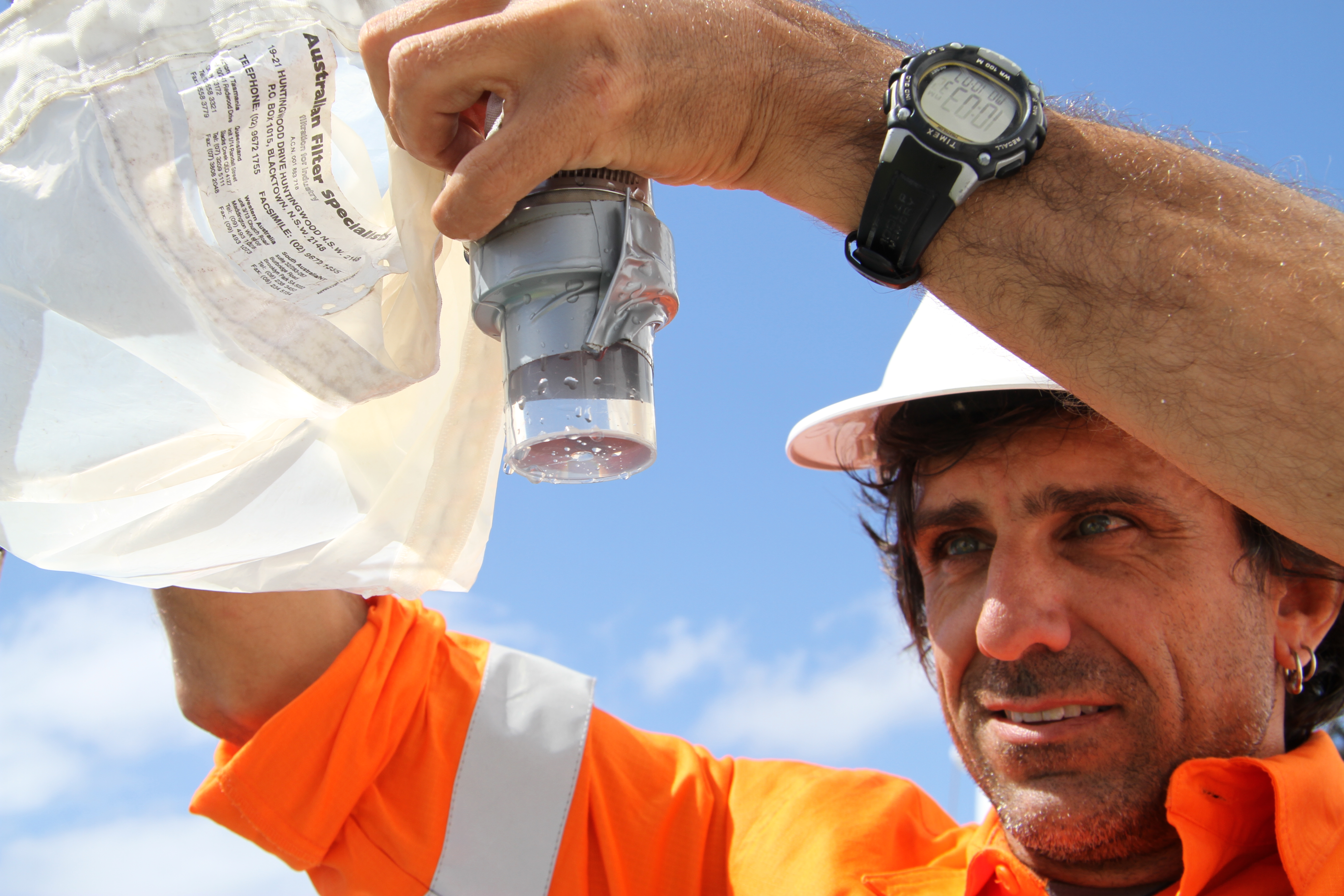 Chris got hands-on with some water samples.

Research scientists were busy working to map the seafloor and investigate undersea phenomenon we don’t know much about.

Using the sophisticated multi-beam echo-sounding equipment on RV Investigator, the team can create a detailed image of the seafloor below. These systems allow the team to measure an arch of up to 150º downward from the hull of the ship. This means that as RV Investigator cruises along in 300 metres of water, researchers can map a 1200-1500 metre wide swath of the bottom.

On this voyage, the mapping team, led by Dr Robin Beaman from James Cook University, was exploring sites linked to underwater landslides. 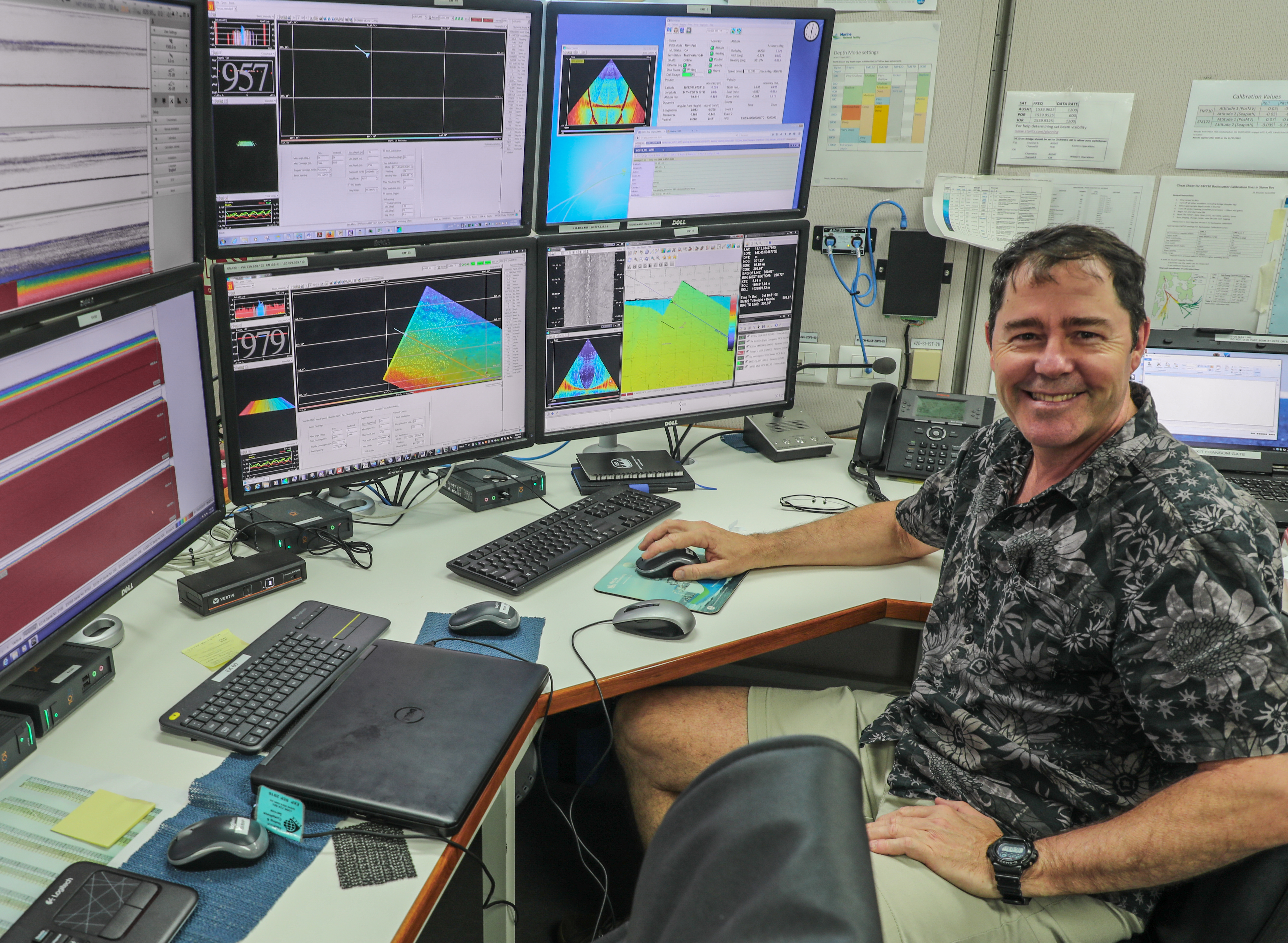 One recently discovered slide, the Swain Slide, occurred when an area of the shelf, located at the outer edges of the Great Barrier Reef, collapsed. Material slid down the slope into deeper water.

Dr Beaman tells me that the available evidence suggests this likely took place between 10,000–18,000 years ago. That’s recent on a geologic timescale.

Findings from this voyage’s mapping exercise show there is little sediment covering the debris field. This indicates that it happened not that long ago.

After measuring 179 square kilometres of seafloor, the researchers determined that the slide was wider than previously thought. It will therefore require further voyages to complete the mapping. Future voyages may involve direct sampling of the seafloor to better understand the composition of the slide material.

Not your ordinary bottled water

To understand the ocean from a chemical, physical and biological standpoint, it’s important to gather information about the seawater itself.

Within the water column there can be huge variations in certain parameters. But how do you go about collecting samples to analyse? On this expedition Dr Dirk Erler and his team from Southern Cross University were using CTD (conductivity, temperature, depth) instrumentation to acquire discrete samples from the water column in the deep sea.

The researchers collected seawater in an array of 24 large cylinders called Niskin bottles, with each 24 litre bottle about a metre in length. 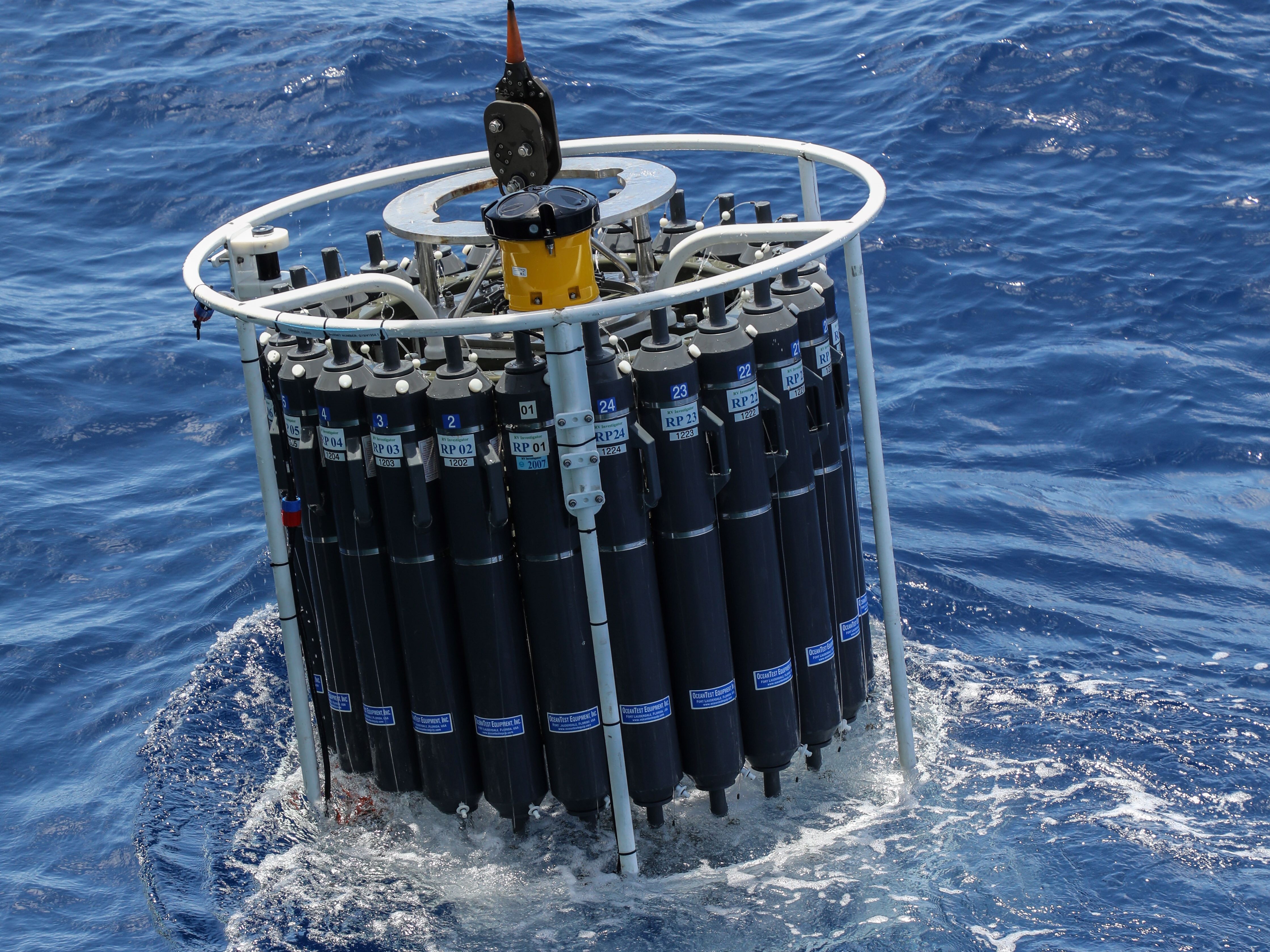 Message in a bottle: These Niskin bottles contain water samples from different depths to tell us more about life under the sea.

Most of the equipment aboard RV Investigator is high-tech and state-of-the-art technology. The bridge is an amazing platform with cutting-edge navigational instruments. The operations room is full of sophisticated computers crunching data from advanced sensors around the ship.

But there is one piece of equipment that bucks that trend and stands out as an old-fashioned, powerful work horse. The Continuous Plankton Recorder (CPR) is a sturdy, metal contraption that looks like it comes from a bygone era of scientific expeditions. And that’s because it does.

The device has been in use since the 1930s collecting plankton around the world and hasn’t changed much in all those years. We towed a CPR unit behind the ship intermittently throughout this voyage. It collected plankton that will be analysed later by researchers in laboratories elsewhere. 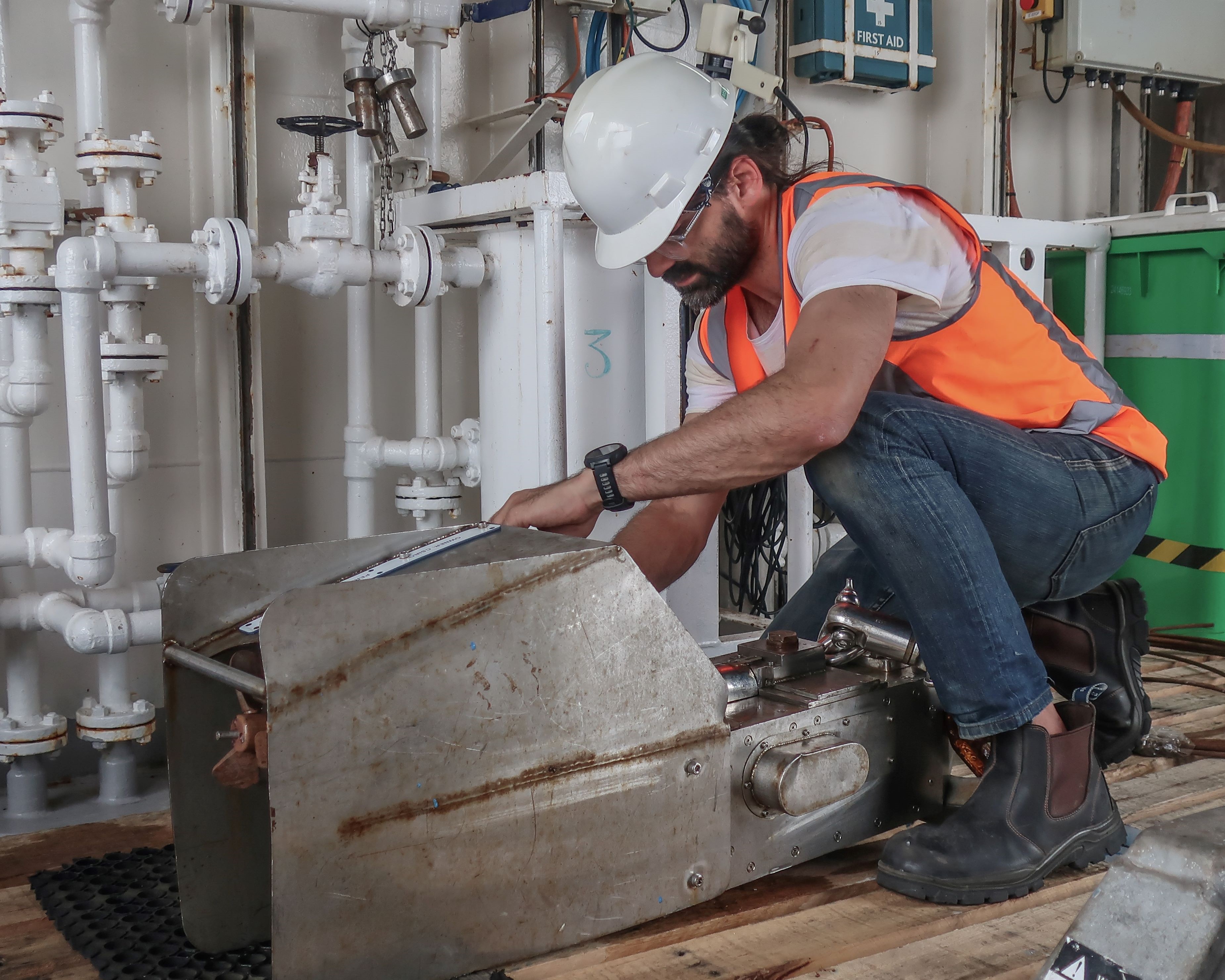 The Continuous Plankton Recorder has been in use since the 1930s for collecting plankton. Image by Chris La Rosa.

We look forwarding to sharing more stories with you from our Educator on Board program in the future. And stay tuned for more awesome science news from this voyage.

Ship over for more updates from our educators on board