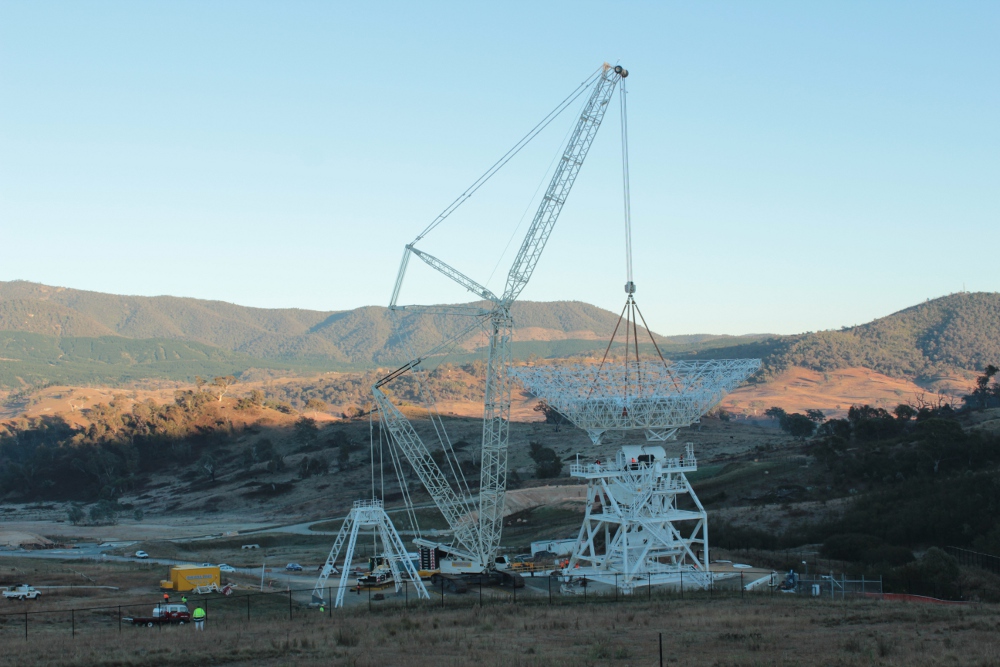 The new dish for Deep Space Station 35 is hoisted into place. Part of an expansion of the Canberra Deep Space Communication Complex, which is managed on NASA's behalf by CSIRO Astronomy and Space Science. Photo: K.McDonnell

The new dish for Deep Space Station 35 is hoisted into place. Part of an expansion of the Canberra Deep Space Communication Complex, which is managed on NASA’s behalf by CSIRO Astronomy and Space Science. Photo: K.McDonnell

Components of the new antenna have been built side-by-side with the antenna base, dish and subreflector ready to be linked together in the fashion of a massive Meccano set.

The delicate operation started at 6.40am well before the sunlight had hit the valley floor. Temperatures were around zero Celcius, with no wind and just some light fog. Pretty much perfect conditions.

A 600 tonne crane began lifting the 125 tonne parabolic dish framework from its marshalling area, guided by just a handful of engineers from the ground. The entire move took only 40 minutes, raising the dish 20 metres above the ground before gently placing it on the base structure and being bolted into position.

The move had gone so smoothly that it was decided to also move the pyramid-like quadleg and subreflector into the dish, rather than waiting until the next day as had originally been scheduled. That move also went flawlessly.

Over the next 18 months, the final components will be installed including dish panels, servos and electronics. Precision calibration works and final testing will ready DSS35 for start of operations in late 2014.

“One of the first big missions that DSS35 will work on is NASA’s New Horizons mission to Pluto. The spacecraft commences returning science from Pluto-space just a few months after the antenna comes online. This new dish will receive whisper-like radio signals that have travelled over 5 billion kilometres to reach Earth. Alongside our other dishes, DSS35 will help to show us this distant world for the very first time.”

CDSCC is managed in Australia on NASA’s behalf by CSIRO Astronomy and Space Science.

Previous post:
Friday Fish Time
Coming up next:
The stars are shining bright for Giovanna