‘Dancing ghosts’: a new, deeper scan of the sky throws up surprises for astronomers

‘Dancing ghosts’: a new, deeper scan of the sky throws up surprises for astronomers

We saw two ghosts dancing deep in the cosmos. We had never seen anything like it before, and we had no idea what they were. 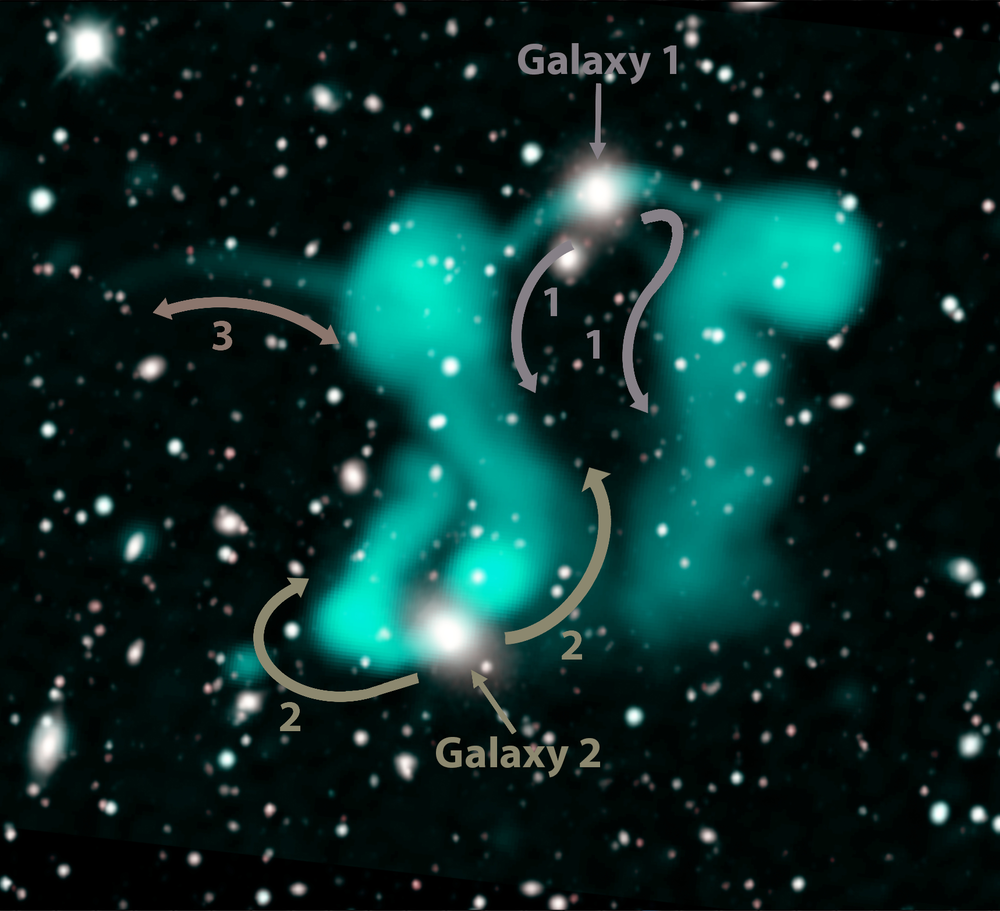 The two galaxies we think are responsible for the streams of electrons (shown as curved arrows) that form the Dancing Ghosts. But we don’t understand what is causing the filament labelled as 3. Image by Jayanne English and Ray Norris using data from EMU and the Dark Energy Survey

Scanning through data fresh off the telescope, we saw two ghosts dancing deep in the cosmos. We had never seen anything like it before, and we had no idea what they were.

But where does the intergalactic wind come from? Why is it so tangled? And what is causing the streams of radio emission? We still don’t understand the details of what is going on here, and it will probably take many more observations and modelling before we do.

We are getting used to surprises as we scan the skies in the Evolutionary Map of the Universe (EMU) project, using CSIRO’s new Australian Square Kilometre Array Pathfinder (ASKAP), a radio telescope that probes deeper into the Universe than any other. When you boldly go where no telescope has gone before, you are likely to make new discoveries. 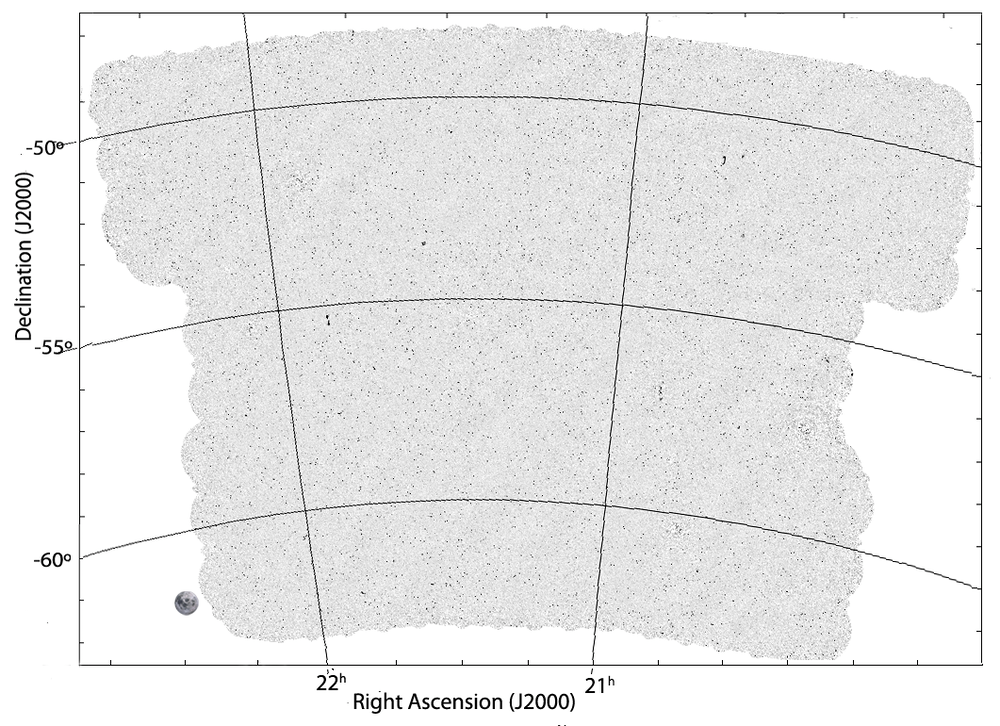 The image produced by the EMU Pilot Survey. The full moon is shown for scale in the bottom left. The dancing ghosts are barely a pin-prick on this image. Image by Ray Norris from EMU data

A deep search returns many surprises

These had never been seen before, because they are so rare and faint. We still don’t know what they are, but we are working furiously to find out.

We are finding surprises even in places we thought we understood. Next door to the well-studied galaxy IC5063, we found a giant radio galaxy, one of the largest known, whose existence had never even been suspected. 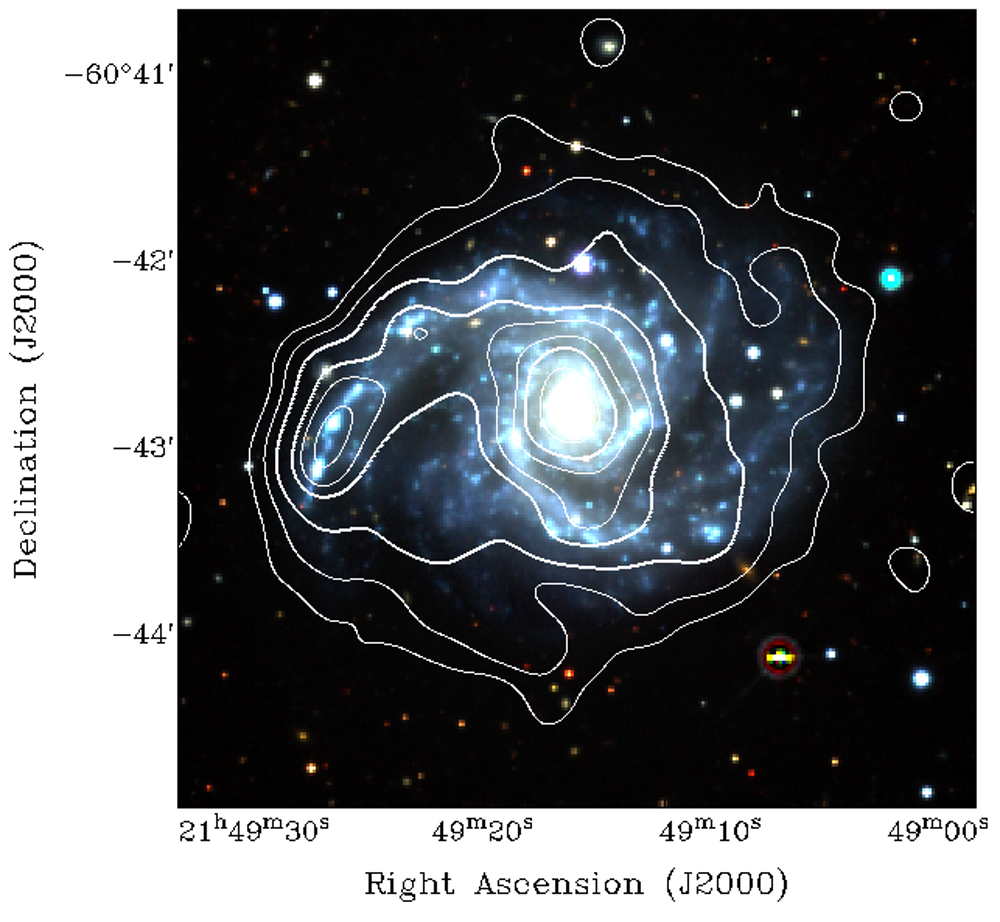 What EMU can do

Most known sources of radio emissions are caused by supermassive black holes in quasars and active galaxies, which produce exceptionally bright signals. This is because radio telescopes have always struggled to see the much fainter radio emission from normal spiral galaxies like our own Milky Way.

The EMU project goes deep enough to see them too. EMU sees almost all the spiral galaxies in the nearby Universe that were previously seen only by optical and infrared telescopes. EMU can even trace the spiral arms in the nearest ones.

EMU will help us understand the birth of new stars in these galaxies.

These some of the first results the EMU project, which we started in 2009. The EMU team of more than 400 scientists in more than 20 countries has spent the past 12 years planning the project, developing techniques, writing software, and working with the CSIRO engineers who were building the telescope. It has been a long haul, but we are at last seeing the amazing data we have dreamed of for so long.

But this is only the start. Over the next few years, EMU will use the ASKAP telescope to explore even deeper in the Universe, building on these discoveries and finding more. All the data from EMU will eventually be placed in the public domain, so that astronomers from around the world can mine the data and make new discoveries.

But don’t take my word for it. You can already use EMU Pilot Survey data to explore the radio sky yourself, using the zoomable image on our website.

Use your mouse wheel to zoom in from the big picture down to the finest details, and see what you find. Perhaps you may even discover something there that the astronomers have missed.

Previous post:
Pest plants and animals cost Australia around $25 billion a year – and it will get worse
Coming up next:
INSIDER: Our new technology helps find dangerous DNA