The life of a parasite: Australia’s most unloved animals

The life of a parasite: Australia’s most unloved animals

Hitching a ride with our kangaroos, platypuses and koalas is the biodiversity you don’t normally see: parasitic worms, or helminths. 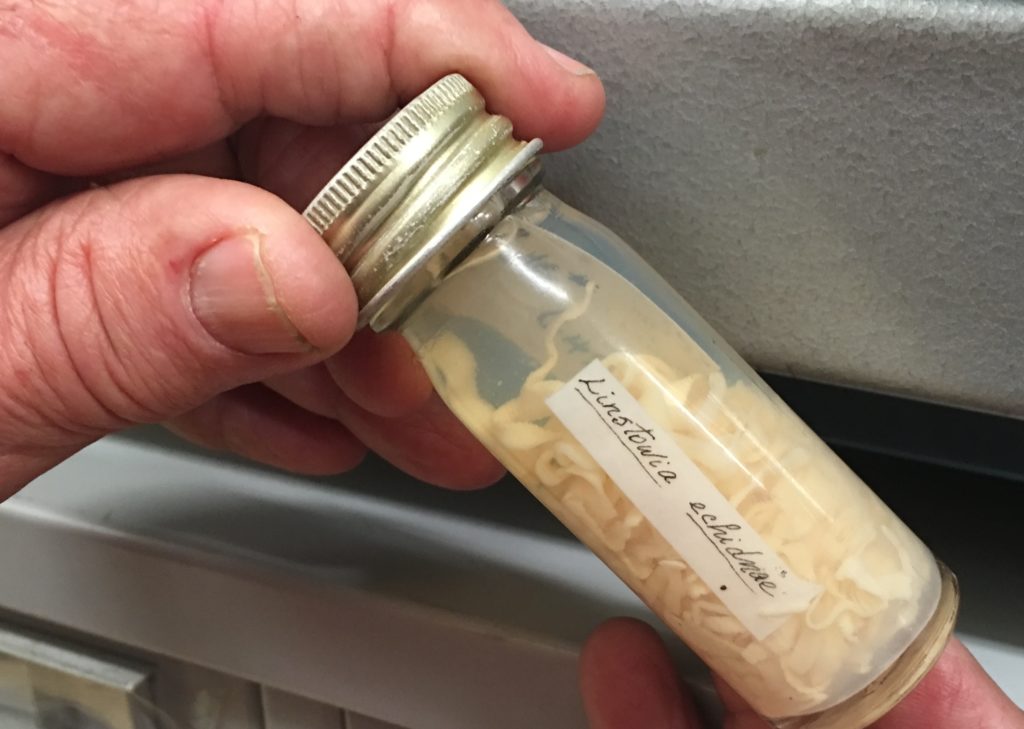 Tapeworms from the intestines of a single echidna.

Hitching a ride with our kangaroos, platypuses and koalas is the biodiversity you don’t normally see: parasitic worms, or helminths.

Some species have evolved a horrific method of hatching, known to biologists as matricidal endotoky, or matricidal hatching. In some species, eggs hatch inside the mother worm and develop to third-stage larvae before bursting from her head, killing her. This is an excellent way for a mother worm to ensure that her offspring reinfect the host in which she lives, but means having children is a once in a lifetime opportunity.

Matricidal hatching is the chosen means of reproduction of a roundworm that occasionally infects people in Australia, causing a life-threatening infection of skeletal muscle cells (stay tuned for more on the muscle-destroying nematode in a future blog post!).

While many marsupials live reasonably happily with their helminth guests, some may experience serious disease when infected with particular helminths from domestic and introduced species. 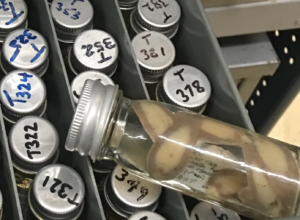 Sheep liver fluke collected from the bile duct of a grey kangaroo. This helminth causes fibrosis of the liver if it infects wombats.

Hydatid cysts are well known in Australia. The larval stage of this tiny tapeworm Echinococcus granulosus causes cysts in the liver and lungs of animals such as sheep and the adult lives in the intestines of dingoes, foxes and dogs.

“When the larval stage infects marsupials, the cysts tend to develop in the lungs rather than the liver. This leads to severely compromised lung function and is a real problem for some of our endangered rock wallaby species,” says Dave.

Dave and colleague Ian Beveridge of University of Melbourne’s Department of Veterinary Sciences recently published a monograph on helminth parasites of Australasian monotremes and marsupials in the journal Zootaxa.

It’s a project with a long history. Back in 1909 pathologist and naturalist Sir John Burton Cleland (1878-1971) and parasitologist Thomas Harvey Johnston (1881-1951) set themselves the ambitious goal to document the parasites of Australian native mammals. Over the following century their checklist was updated many times by different authors as new parasites were discovered, and new marsupials too.

The number of known helminth parasite species continues to increase as more species of marsupials are examined for parasites and as DNA techniques help researchers understand species preserved in helminth collections.

There are many more helminth parasites waiting to be discovered. Around a quarter of marsupial species have never been examined for parasites and most studies have focussed on gastrointestinal parasites, overlooking those that live in the marsupials’ other tissues, from the eyes to the brain to the pulmonary arteries. Many Australian parasites are at risk of disappearing, along with their hosts – one monotreme and 24 marsupials are listed as either critically endangered or endangered. Others have disappeared along with the 19 species of marsupials, including the thylacine, that have become extinct since European settlement.

David and Ian’s checklist includes all published records, to April 2015, of the helminths that occur in Australasian* monotremes and marsupials, including life history studies, pathological observations and epidemiology, as well as all unpublished records known to them.

Information is organised by host and includes extinct species as well as the names of all host species from which no parasites have been recorded.

Find out more about the Australian National Wildlife Collection in Canberra.

Previous post:
Crash test dunnies: making sure our toilets are up to standard
Coming up next:
Stopping superbugs with a protective coat