Are Australian snakes really the most dangerous in the world?

Are Australian snakes really the most dangerous in the world?

Is it really a 'snake mistake'? Our resident herpetologist, Ruchira Somaweera, sheds light on some snaky misconceptions, and gives us an insight into the striking life of a herpetologist. 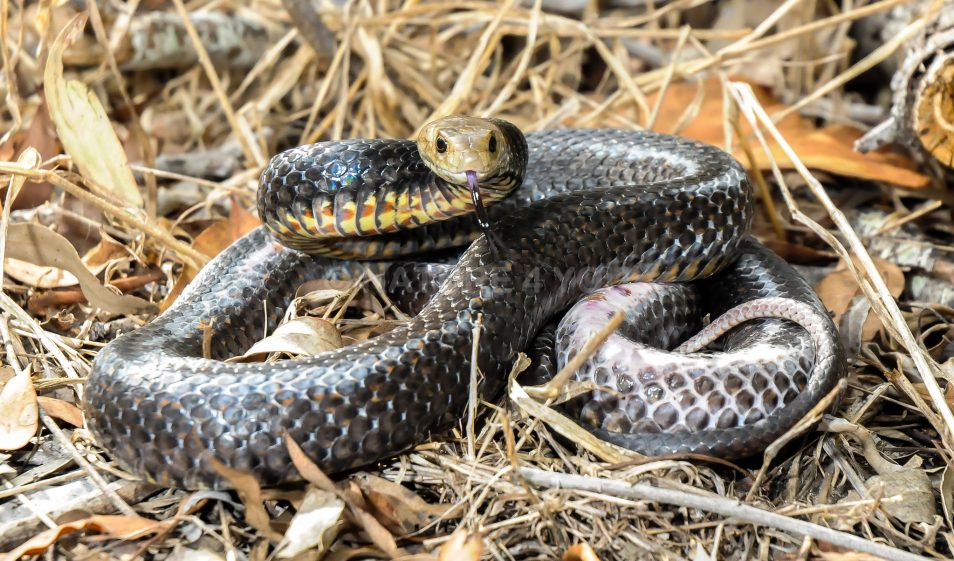 Because the Eastern Brown Snake can cope and even thrive in areas of human disturbance, and its natural range includes Australia’s most populated areas, it’s probably encountered more than any other type of snake. Image: Scott Eipper

It’s true: we terrify people from overseas with tales of drop bears, spiders as big as dinner plates, man-eating sharks, and the most dangerous snakes in the world. It’s become a cultural pastime for some Aussies. And yes, we can admit, it’s pretty amusing seeing the horrified faces of British backpackers who hang onto our every word of rat-sized spiders invading our homes.

But are we beginning to believe our own tall tales? Is everything really out to kill us? Do we actually have the most dangerous snakes residing in our own backyard? It turns out, most certainly not.

“Everything is trying to kill you”

There are some misconceptions about snakes embedded in Australian culture, according to our resident Herpetologist, Ruchira ‘Ru’ Somaweera. Herpetologists, in case you were wondering, specialise in the study of reptiles and amphibians. Ru’s been up-close more than most with his research and has the scars to prove it (but that’s a story for another time). 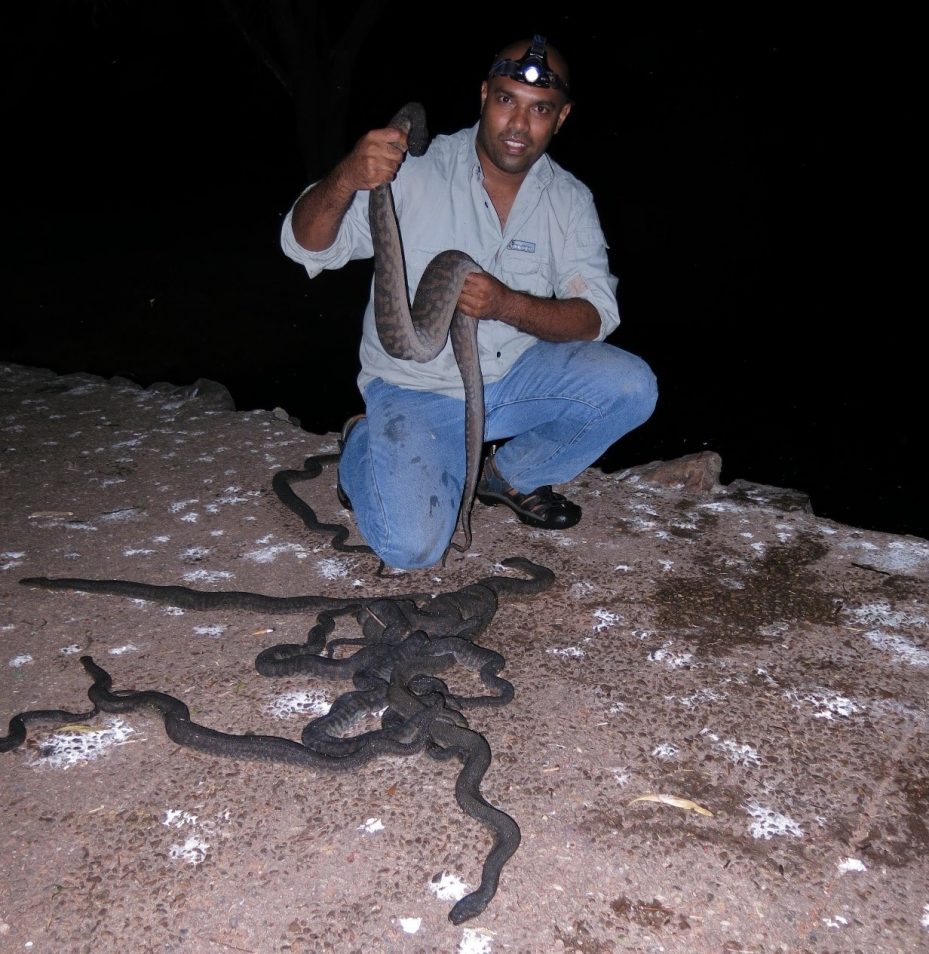 A scene out of Indiana’s “Temple of Doom”? Could be! Ruchira studying Arafura File Snakes in Darwin.

This myth actually started a few decades ago and came out of a study of LD50 (lethal dosage 50) — a lab-based study of toxicity, which used mostly Australian snakes to observe the amount of venom needed to kill half a population of mice. This study sparked a whole new world of research, centring on the fact that Australia has the most dangerous snakes due to their high toxicity values. What this biased study failed to highlight was that it didn’t include many well-known highly dangerous snakes from other continents and, perhaps even more importantly, the study had little relevance to humans as it was conducted on mice.

But is it really?

But before we shout, ‘myth busted!’ let’s put this into perspective. Yes, we have some scary snakes in Australia but none are close to what’s happening in tropical parts of Asia, Africa and South America – they have a group of snakes called Vipers (which we don’t have, phew!). These snakes are relatively large, aggressive and common. Encounter rates and bites are common in agricultural lands due to limited preventative knowledge including appropriate footwear and first aid training.

“If you look at the amount of people who actually die from snakes each year in Australia, it’s practically nothing. The encounter rates are so low in comparison to other parts of the world,” Ru said.

A conservative estimate would be one million venomous snake bites happen globally every year. In India alone, about 10,000 people die every year from snake bites. In the neighbouring island of Sri Lanka, about 80,000 people get bitten by snakes annually, of which about 400 lose their lives every year. So snake bites are a real threat in other parts of the world, especially Asia, compared to Australia.

Factors such as the quality of antivenom, our paramedical services, and knowledge of first aid is really good in Australia, which also contributes to the negligible number of human deaths.

To help combat these misconceptions, scientists have come up with a more relevant concept of dangerous snakes in Australia, which is based on the actual threat posed on human lives. Species such as Brown snakes and Tiger snakes likely top this list – they are relatively common in urban areas and can be aggressive upon confrontation. Brown snakes are also daytime active, so encounter rates are higher. 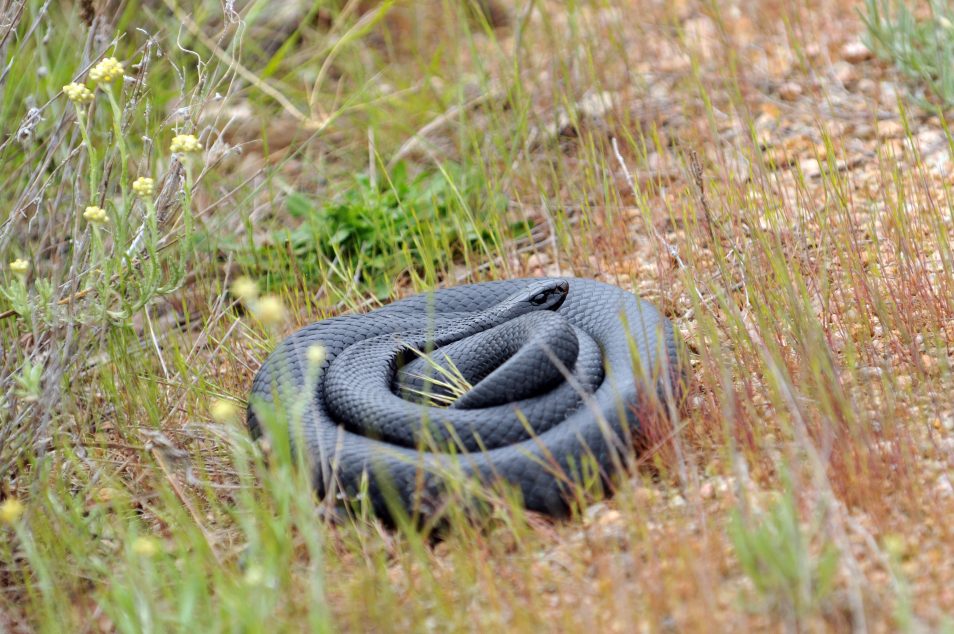 Red-bellied Black Snakes are one of the most frequently encountered snakes on the east coast of Australia. But they’re a shy snake and will generally only deliver a serious bite under if severely pestered.

A blockbuster fact vs fiction

To add more excitement to his busy research career, Ru collaborates with National Geographic and other media channels to educate the public about snakes and reptiles. Having been involved with National Geographic as one of the Society’s explorers, Ru recently participated in a collaboration with Fox Action Movies to improve broadcasting of snake-related content and tackle the misconceptions of snakes on the big screen.

Ru featured in short clips that ran in popular Hollywood animal movies, such as Anaconda, where he debunked reptile myths and provided scientific truths of what these reptiles are really like.

“A lot of the misconceptions around snakes and reptiles are due to popular media, it’s all good fun but the truth is often quite different,” Ru said.

While we’re playing myth buster, here’s a few more to sink your teeth into.

Sea snakes can’t bite because they have small teeth. Not entirely accurate actually. Some species have the same fang length as a Brown snake of the same body length. The reason there are so few reported bites is because Sea snakes are generally pretty timid. But if you’re heading up to the tropics and think draping one around your neck to gain likes on your Instagram is a good idea, think again.

Baby snakes are more venomous because they can’t control the amount of venom released. Believe it or not, the primary function of venom is to paralyse the snake’s prey so they can eat and digest their food before it escapes, it’s not there for the sole purpose of attacking you. Considering the immense amount of energy and substance it takes to create venom most snakes can control and decide when they utilise their venom. Often they will dry bite as a defence mechanism rather than waste their precious venom. This is true for baby snakes too.

There are many other factors that come to play in the release of venom including species, body size, hydration, diet and when the snake has last fed but this is relevant to snakes of all life stages not specific to babies.

So while we’re all not going to Hollywood to set the facts straight about snakes, we too can undo some common misconceptions in the comfort of our own homes.

Previous post:
Bees with backpacks fly into schools
Coming up next:
Curious Kids: Why are there waves?