Blowing the lid off the volcanic story of Heard Island

Blowing the lid off the volcanic story of Heard Island

Scientists studying a remote volcanic island have found it plays an important role in feeding a hungry ocean. 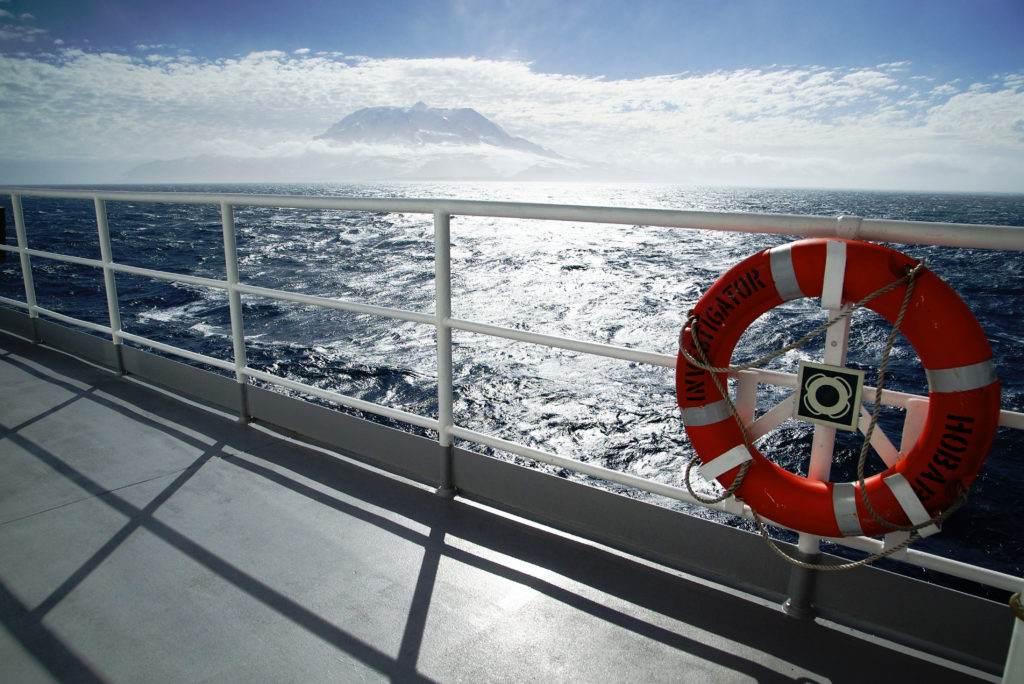 A rare sight greeted scientists as they approached Heard Island on board research vessel (RV) Investigator in 2016. Normally shrouded in the wild weather of the Southern Ocean, the island was unusually clear. Upon arrival it revealed a small plume of smoke rising from the summit. The island had a secret to share.

Human eyes rarely see an eruption of Heard Island. The island is extremely remote – about 4000 kilometres southwest of Perth. Furthermore, the extreme weather of the Southern Ocean surrounding the island usually hides it.

Cameras on board captured the moment and the world enjoyed the story. But Heard Island had more secrets to share. So, scientists on board began cataloguing observations and collecting samples and data from above and below the waves to learn more.

Five years later, analysis has revealed the volcanic story of Heard Island and uncovered how it helps sustain life in the surrounding ocean.

Phytoplankton are the base of the ocean food chain and are responsible for nearly half of the global primary production. These microscopic marine algae harness the energy of the sun to make their food through photosynthesis. This feeding process relies heavily on the presence of iron in seawater, a nutrient vital to most living species.

The surface waters of the Southern Ocean, where phytoplankton are found, are anaemic. This means these waters lack iron, which is limiting to the growth of phytoplankton.

A research team from the Institute of Marine and Antarctic Studies (IMAS) found volcanic emissions from Heard Island in 2016 resulted in increased atmospheric loading of iron. This increase was around and up to 500 km downwind from Heard Island. Biologists on board measured a strong growth of the marine ecosystem around Heard Island during the voyage. This indicated the volcanic eruption was the source of iron for the phytoplankton. 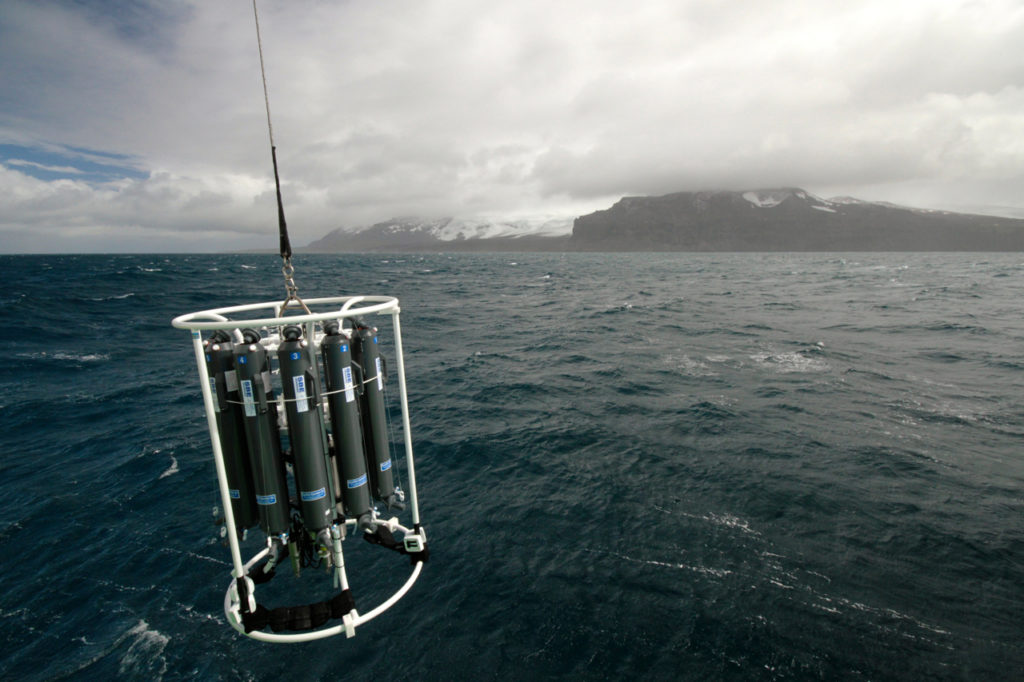 A trace metal rosette is lowered into waters off Heard Island to collect water samples for analysis. Image: Pete Harmsen. 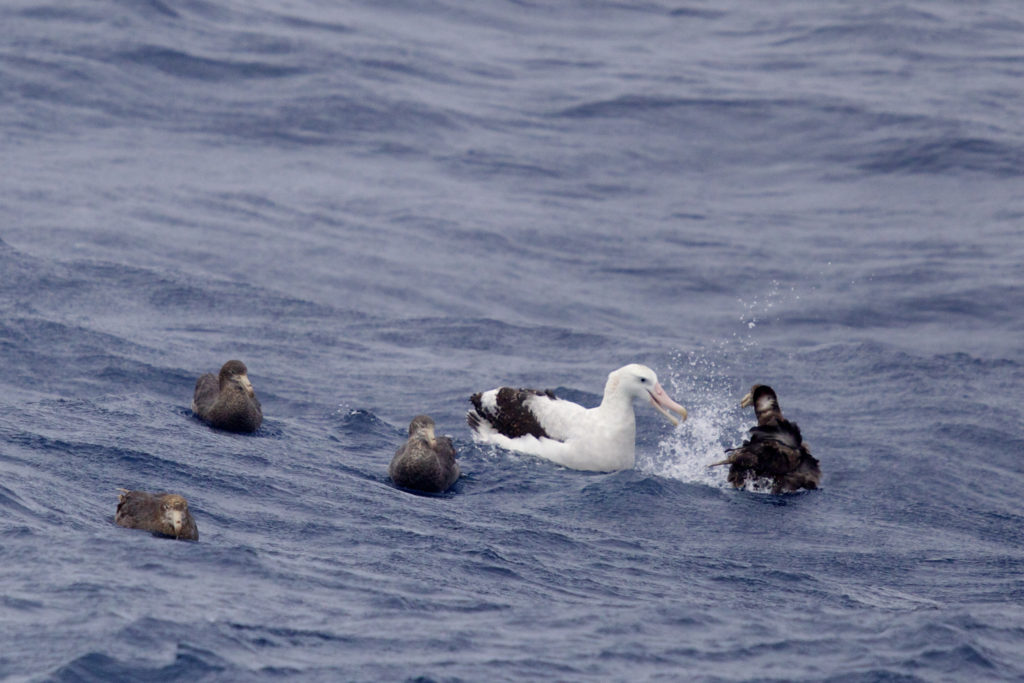 Iron is important for supporting life in the ocean. Image: Pete Harmsen.

Southern Ocean productivity contributes to regulating the global climate through absorbing atmospheric carbon dioxide. Specifically, carbon dioxide is taken up by growing marine life, such as phytoplankton. It can also be captured in dead organic matter. This then sinks to the deep ocean where carbon is stored for centuries to millennia.

Previously, it was thought that iron supply to the ocean around Heard Island came from glacial outflows from the island or from underwater hydrothermal vents (volcanic hot springs on the seafloor) from nearby McDonald Island. Volcanic emissions represent a significant source of iron for the surrounding ocean, the new research has found. Prior to this, we did not account for it adequately. 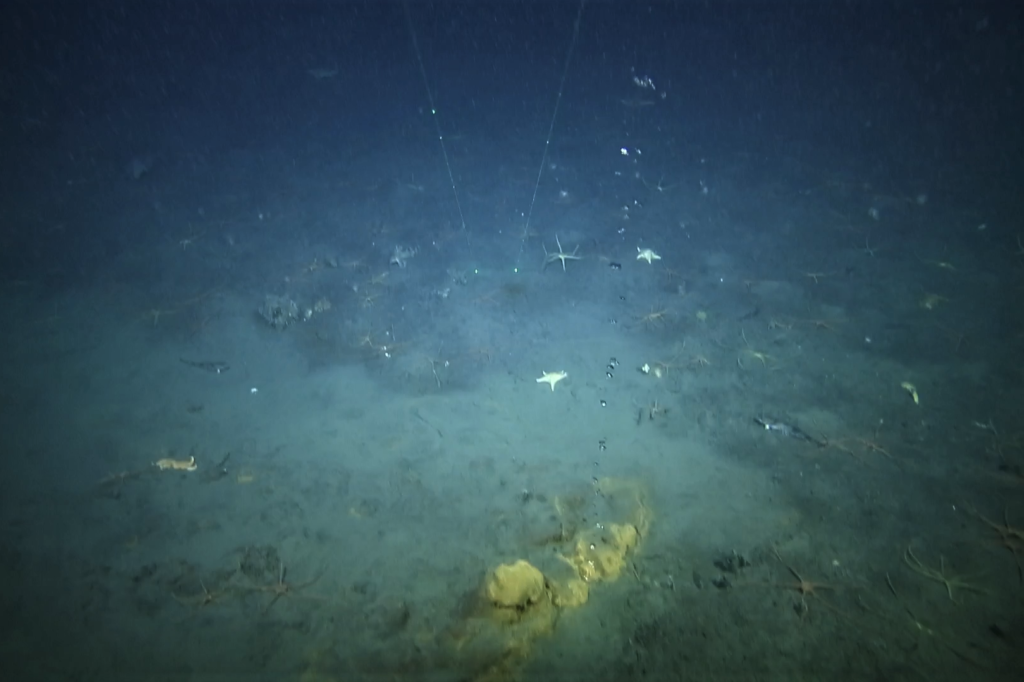 Bubbles rise from a vent on the seafloor, caused by volcanic activity far below.

Several volcanic islands are present in the Southern Ocean. These could play a key role in fuelling marine productivity and regulating atmospheric carbon dioxide sequestration (capture and storage). This new research will contribute to improving modelling of the interaction between the Southern Ocean and global climate.

As other scientists on the voyage would find, the volatile and volcanic Heard Island has likely been an important contributor to sustaining life in the surrounding ocean for a long time.

Mapping the birth of a volcanic island

A short isthmus separates the two geographic areas of the island: Laurens Peninsula and Big Ben. These two areas correspond to the two main volcanic centres on the island. Current volcanic activity is focused on Big Ben. Big Ben has produced small lava flows of 250 metres to two kilometres in length regularly over the past 10 years. 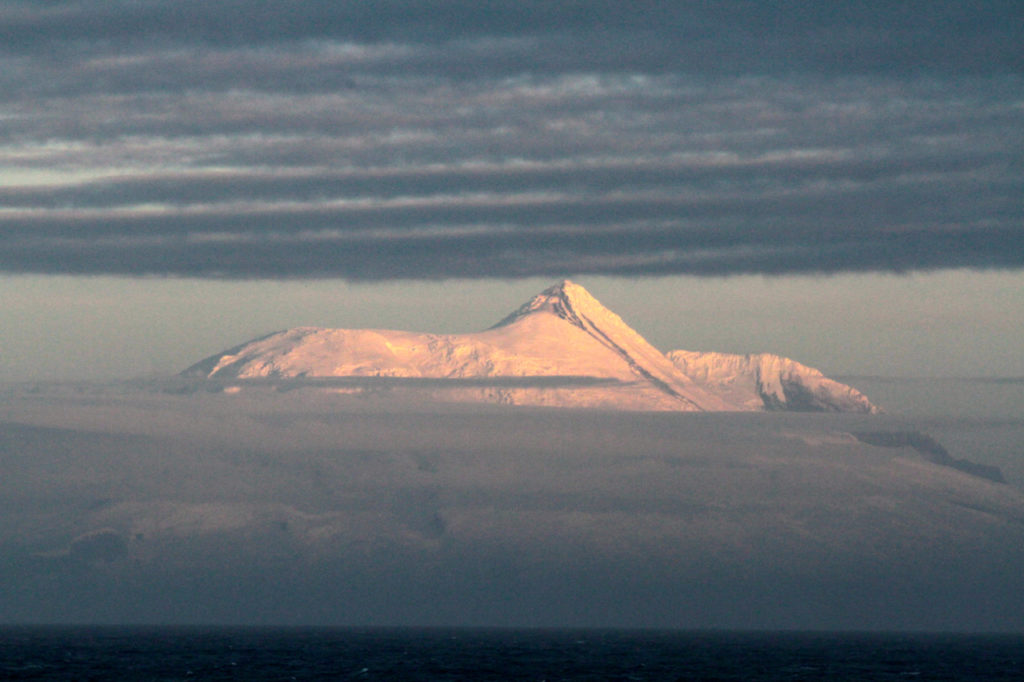 However, some debate surrounds the current height of the island. Volcanic activity is constantly adding new material to the island, building it to new heights. Today, scientists think it might have grown to more than 2800 metres.

While some scientists on the voyage were studying iron in the atmosphere and ocean surrounding Heard Island, others were focused on the geology of the island. There has been no attempt at unravelling the volcanic evolution of the island in detail. Until now.

Earlier this year, geologists from the University of Tasmania, including those on the 2016 voyage, produced the first detailed geological map of the island. They did this by combining observations made during the voyage with a wide range of data and samples collected from other research activities. 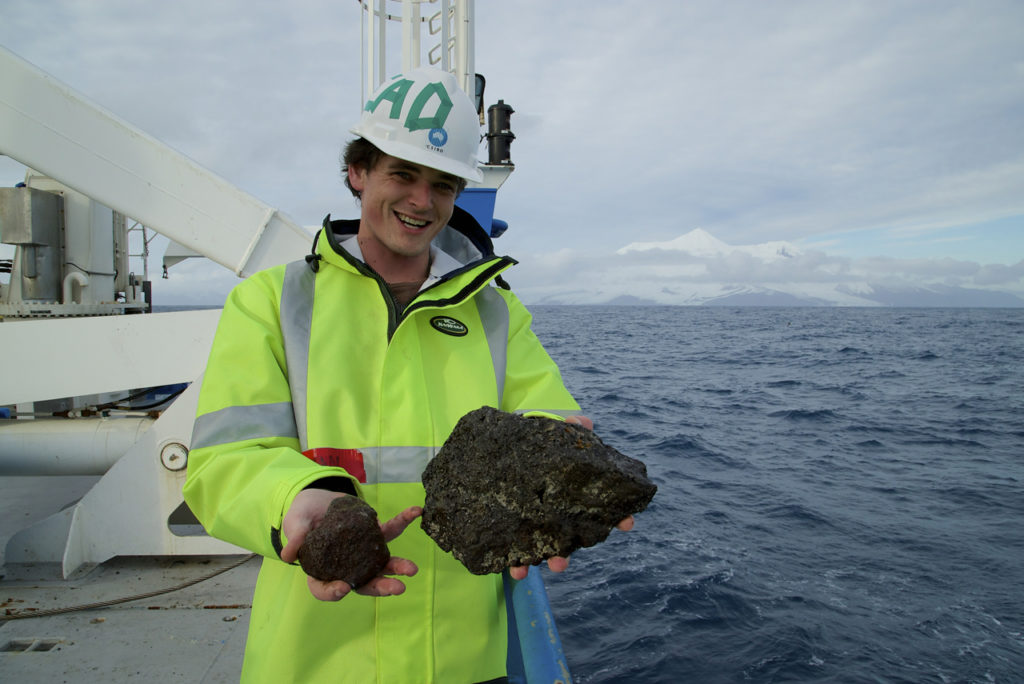 Scientists collected data and samples from above and below the water during the voyage. Image: Pete Harmsen. 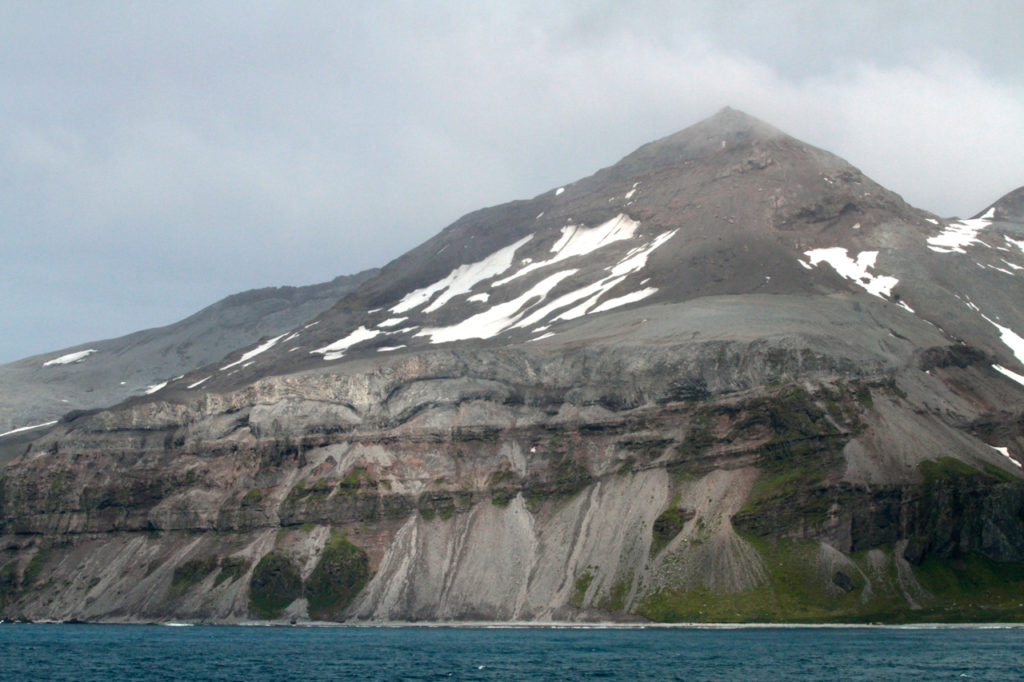 What they describe is a long history of volcanic creation and destruction.

Volcanic sediments deposited millions of years ago formed and gave birth to Heard Island. About one million years ago, a hotspot deep beneath the crust produced a volcanic plume. This finger of bubbling molten rock produced the peaks of the island, including Big Ben.

About 60,000 years ago, the southern flank of Big Ben collapsed. This split the island in two and releasing an avalanche of debris into the nearby ocean. Since that time, Heard Island has endured thousands of years of extreme weather and volcanic activity. This volcanic activity has repeatedly built up the island to then tear it down. And start the process all over again. 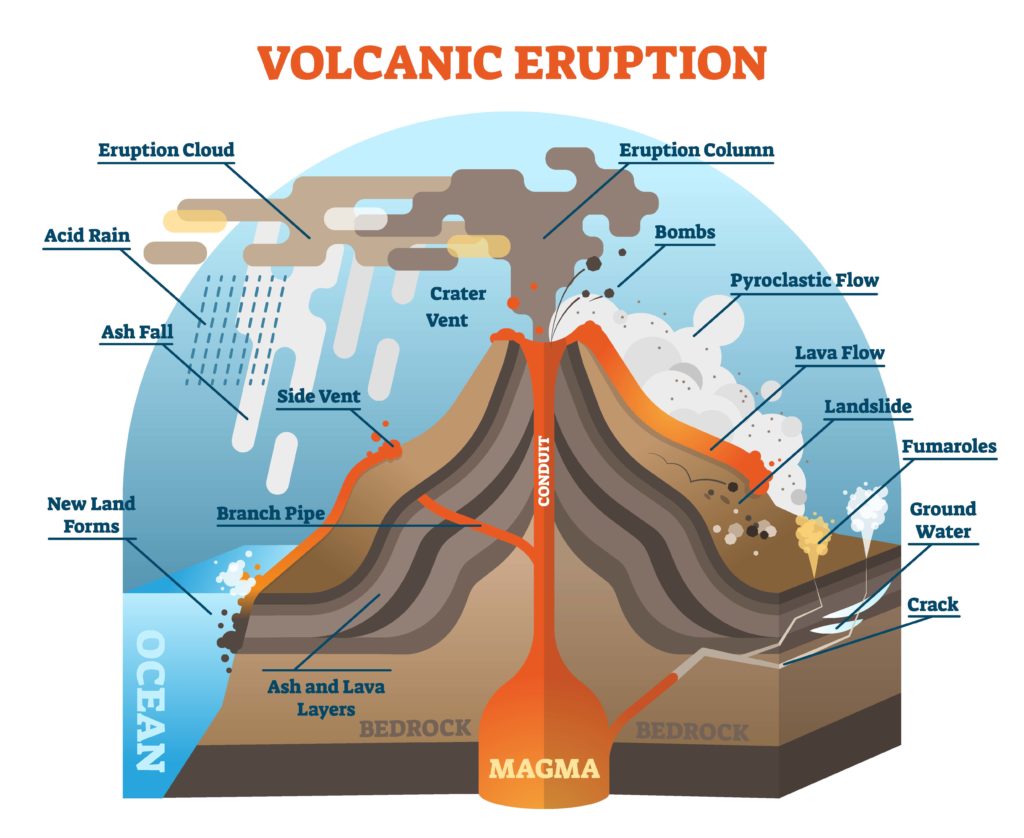 The features of a volcano and volcanic eruption. Image: Shutterstock.

The volcanic cycle of creation and destruction, shown in the new geological map of Heard Island, has likely repeatedly released iron to sustain ocean life and productivity over a long period of time. At the same time, phytoplankton have likely been locking up atmospheric carbon dioxide through the blooms of life supported by that release of iron.

A past window on future climate

Heard Island is just south of the Antarctic Polar Front. This is a major oceanic and climatic boundary. This makes it an important location for studying the impact of climate change.

Research conducted during the 2016 voyage of RV Investigator increases our knowledge of factors influencing ocean productivity and global climate. This helps us better understand current observations and improve modelling to predict the future.

In 2022, scientists will again embark on RV Investigator. They will head south to further investigate the history of the global climate. They will do this by studying sediments off East Antarctica that span multiple glacial-interglacial cycles.

Our wild and remote ocean has many more secrets for unlocking.

Take a trip back in time to Heard Island

Previous post:
Capturing the Universe in paint and pixels
Coming up next:
Science explainer: COVID-19 vaccine hesitancy and barriers