We’re using cutting-edge science and herbarium specimens (some from Burke and Will’s expedition!) to uncover the mysterious origins of Australia’s hibiscus species. 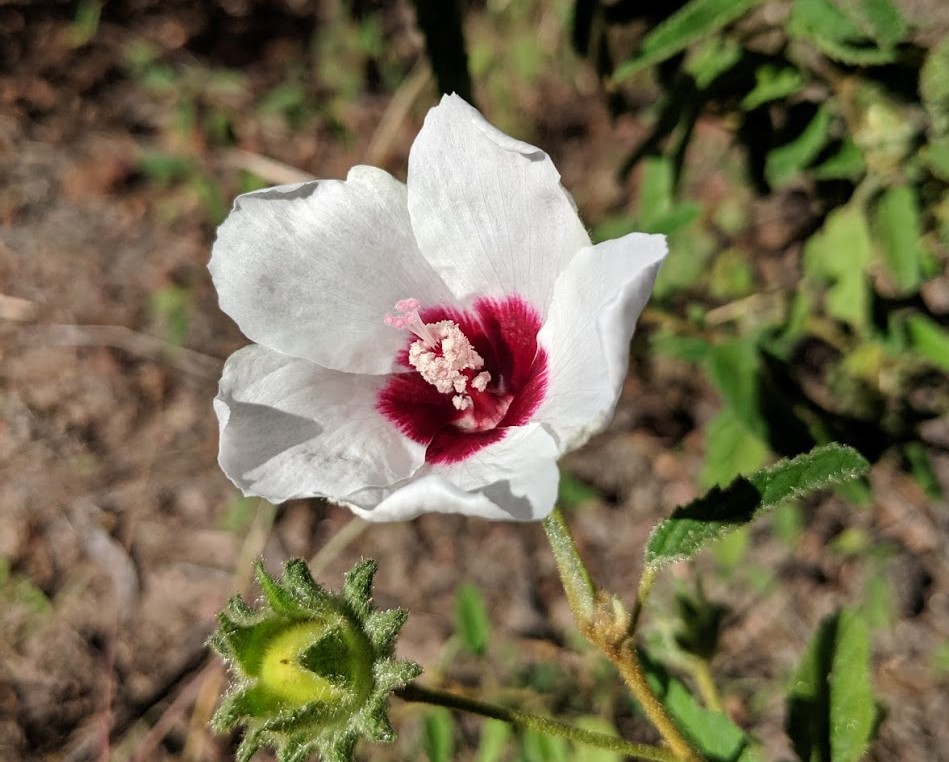 You might know these flowers from patterns on a Hawaiian shirt. Maybe you have one flowering in your garden. You might even have tasted them in herbal teas. Hibiscus is globally iconic, and Australia has its own unique share of hibiscus diversity.

For Todd McLay from the Australian National Herbarium in Canberra, hibiscus are more than just a garden flower or snazzy shirt pattern. They represent a major taxonomic tangle that needs to be sorted out, with new species yet to be described.

With the development of modern genomic science techniques, such as those that Todd is using, herbarium specimens have become more valuable than ever. Specimens, even our most historic plant specimens, can now be sampled and sequenced. This is providing us with new insights into our natural biodiversity.

Todd is working with specimens from Australian herbaria, assembling evidence from the genomes of Australia’s native hibiscus and their close relatives. He works in the field of molecular phylogenetics, the branch of science that examines DNA sequences to map out evolutionary relationships between species.

He’s using hundreds of herbarium specimens — going back to the Burke and Wills expedition in 1860 — to build a knowledge base of Australia’s hibiscus species and make it available to all. Todd’s investigations will be added to Flora of Australia where anyone can access the new information through descriptions and images that he will make available.

Australia’s hibiscus: the story so far

Australia has about 100 described species of native hibiscus. They include species like Hibiscus splendens from Queensland with bright pink flowers up to 30 cm across. The extremely hairy Hibiscus coatesii from the Pilbara region in Western Australia. And diminutive Hibiscus tridactylites that is a common weed in cotton crops.

Many of our hibiscus species live in temperate or tropical climates and belong to one of two large groups – sections Trichospermum and Furcaria. These two groups are reasonably well-studied, so Todd set his sights on studying the third group: section Bombicella.

Bombicella occur widely across arid areas of central Australia. They may not be as well-known as the hibiscus on your Balinese sarong. But to a scientist they hold keys to understanding how species survive in arid habitats and why some hibiscus are vulnerable to decline and extinction.

So where do the arid species come from, evolutionarily speaking? Todd is using his skills in molecular phylogenetics to analyse their evolutionary histories. But first he had to figure out how many different species he was actually dealing with. 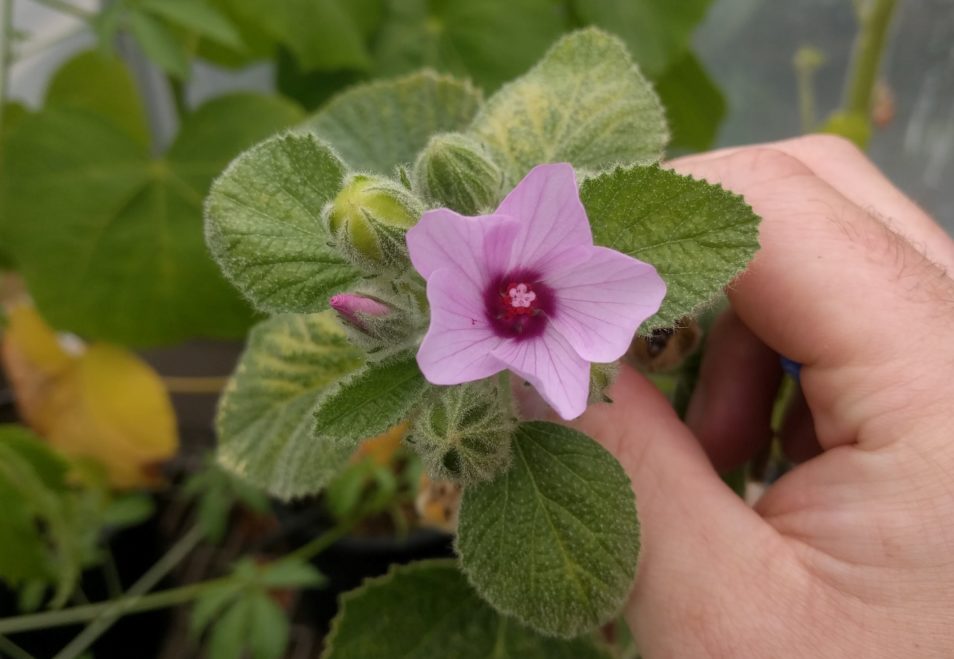 A hand holding up a purple hibiscus flower in a greenhouse.

The extremely hairy Hibiscus coatesii, a species complex from the Pilbara, Western Australia. This plant was grown in our glasshouses.

Unlike hibiscus species in Australia’s tropical and temperate regions, arid-adapted hibiscus had not before received much research attention. There were piles of herbarium specimens. But some lacked species names and detailed collection information. Others had been given different names by different scientists.

“For some species all we have is a single specimen, not in great shape, and with only a sentence or two describing it,” Todd explained.

“In other cases, we might have two specimens, both collected sometime during the 1800s, but hundreds of kilometres apart. Because the two look similar, they were tentatively labelled as the same species and no one has looked back to check.”

The phrase ‘species complex’ describes a group of species that are so similar they are difficult to distinguish. Identifying how many species are in the complex and where the boundaries are remains a major challenge in taxonomic research. 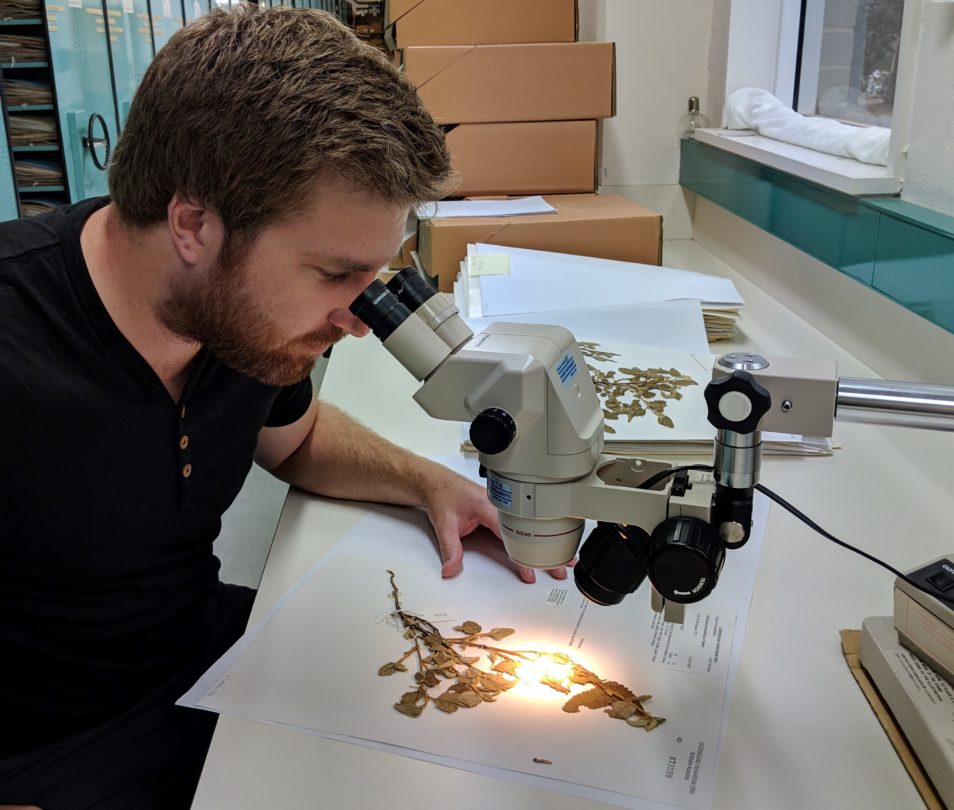 Person sitting at a bench looking through a microscope at a pressed plant specimen.

Todd McLay taking a closer look at a hibiscus specimen at the Australian National Herbarium.

Todd has discovered around 40 new species of hibiscus just by looking through the hibiscus collections at the Australian National Herbarium. And specimens on loan from other Australian herbaria.

“It’s a pretty diverse project,” Todd said. “Last week I spent a morning struggling to read handwriting for a specimen collected in 1860, during the Burke and Wills expedition. Later that afternoon I was analysing large amounts of DNA sequence. It’s an interesting mix of history and rapidly changing sequencing technologies.”

Once he’s sorted out how many species might be in a species complex, Todd can start to reveal their evolutionary relationships using molecular phylogenetics. And by using the variation in DNA of those genes, researchers can map out how species are related to one another. 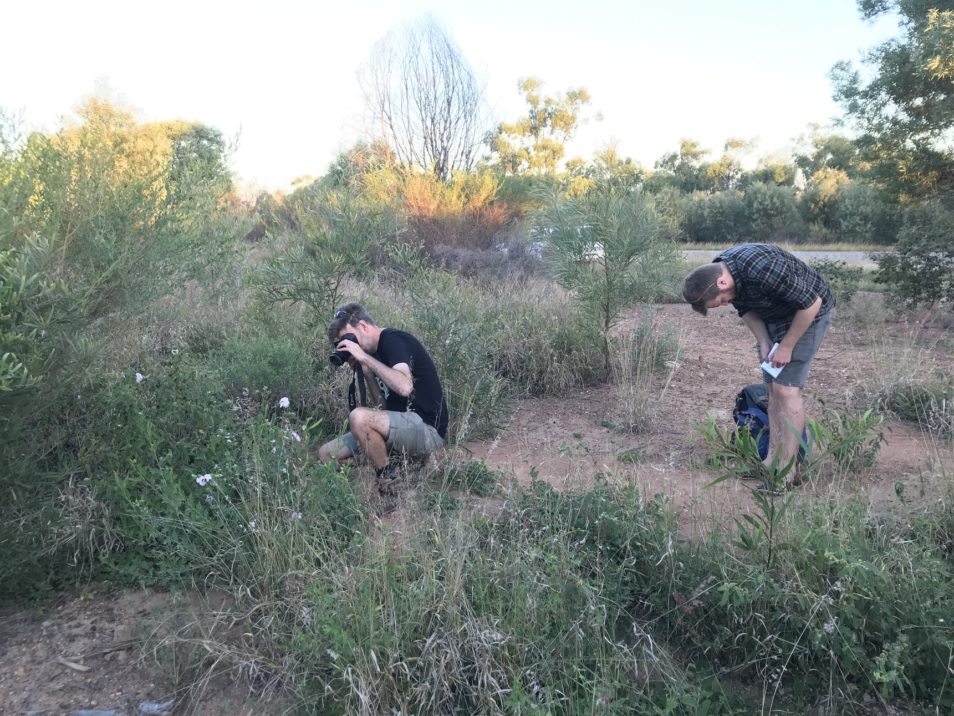 Two scientists taking photos and making notes about hibiscus growing among grass and shrubs beside a road.

Hibiscus hunting! Mike Bayly (University of Melbourne) and Todd McLay recording hibiscus specimens while on a field trip in Queensland

This work is helping build the family tree of hibiscus species, so that we can better understand their origins, how they evolved and how they spread throughout Australia. Todd’s research suggests that our arid-adapted hibiscus species are actually more closely related to foreign hibiscus species from arid zones in the Americas and Africa than they are to our own temperate species.

So how did they get here?

“That’s one question we haven’t answered yet,” Todd said. “They may have spread from Australia to the rest of the world, or they may have evolved somewhere else tens of millions of years ago and spread here.”

Thanks to Todd’s research, and the diligent collecting, preserving, and study by many botanists before him, we are piecing together the story of one our nation’s most beautiful flowering plants.

Previous post:
What does the future hold for livestock production in Australia?
Coming up next:
We re-imagined Elton John as insects, and it kind of works.