Things that sting: how do Aussie insects measure up on the pain scale?

Things that sting: how do Aussie insects measure up on the pain scale?

Down Under bugs and their pain scales (PS. The Spider wasp that drags huntsmen spiders along to their nests to feed their larvae rates pretty high).

Although the mercury is soaring around parts of the country, the sun isn’t the only thing that could be biting this summer.

Being home to some of the world’s deadliest animals, we have our fair share of bugs Down Under which, although they won’t kill you, can leave you in quite a bit of pain.

But which of our beautiful insects should you do well to avoid this summer?

In the 1980s American entomologist Justin Schmidt developed an index to rate the relative pain caused by different stings on a four-point scale. Using the Schmidt sting pain index combined with the knowledge of our resident expert Dr David Yeates, we’ve come up with a scale to rate the pain inflicted by some of the insects you might come across while you’re out and about this summer. 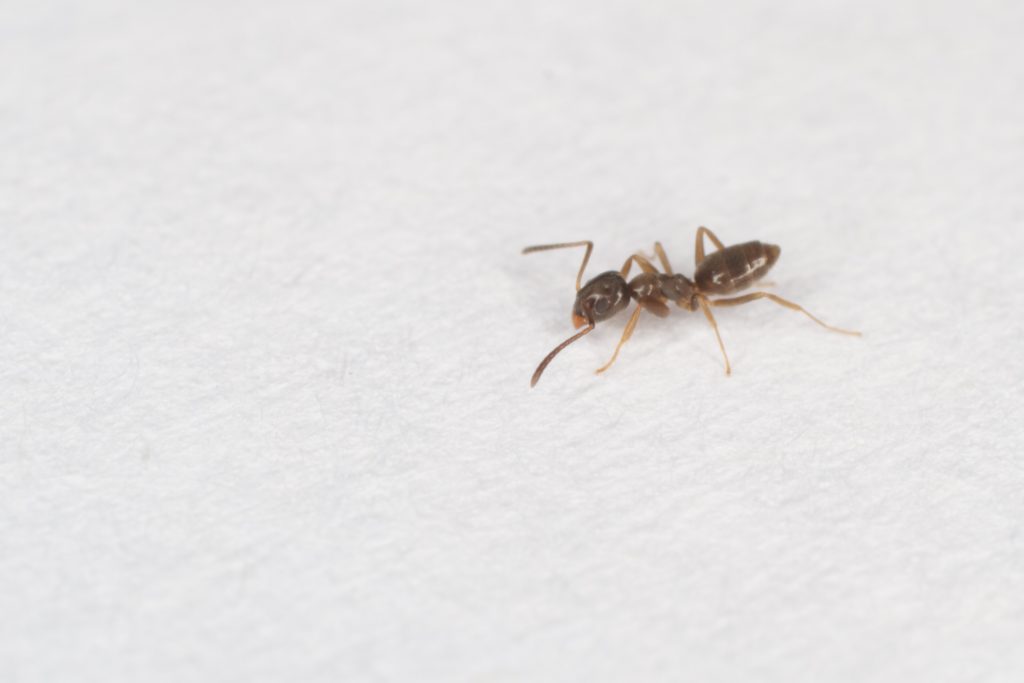 Out of this list, we’d be okay with coming across this one. – Image credit Brian Gratwicke

Although not specifically identified in Schmidt’s listing, we couldn’t go without asking Dr Yeates about these nibbly little Aussie heroes, particularly as most of us could well be sharing a kitchen with a colony of them this summer.

“Ants love to come indoors at this time of year, particularly if you leave scraps of food lying around,” Dr Yeates said. “The good news is that if they bite it probably feels more like an itch you want to scratch.” 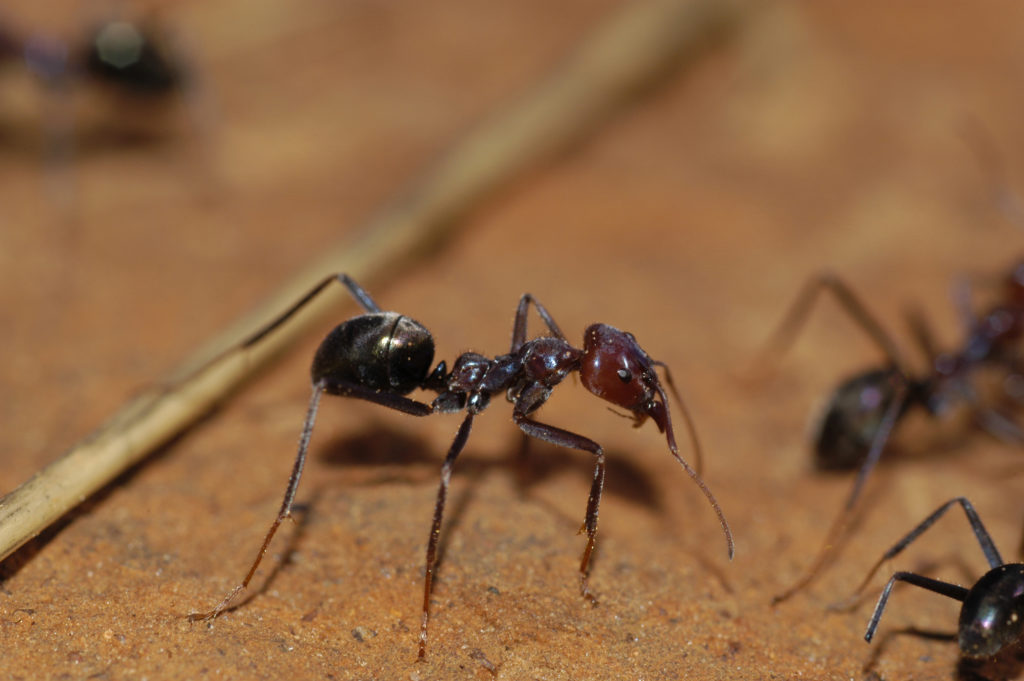 So-called because of their fondness for eating…. well, meat. These babies enjoy feasting on caterpillars, butterflies, cane toads and the occasional misplaced human foot. Justin Schmidt didn’t enjoy the privilege on being munched on by these Aussie natives, but our man Dr Yeates can recall the pleasure.

“They can’t sting you, but if you get bitten by a meat ant it can be quite irritating,” Dr Yeates said. “The bite from a green tree ant is quite comparable in terms of pain, as it will bite you to cut into the skin before spraying formic acid into the cut.”

Fairly tame in comparison to stinging ants. “Any ant that can sting will also bite you, and some will bite to hang on while they sting.”

Although it’s somewhat comforting to know that this ant’s name is not related to dietary preference, less reassuring is the true origin of the fire ant’s name: multiple stings give the sensation that the body is on fire.

Native to South America, fire ants have been found in parts of South East Queensland since 2001, and are classed as a social menace because of their sting.

Schmidt awarded the fire ant a modest pain scale rating of 1.2 describing the sting as: “Sharp, sudden, mildly alarming. Like walking across a shag carpet and reaching for the light switch.” 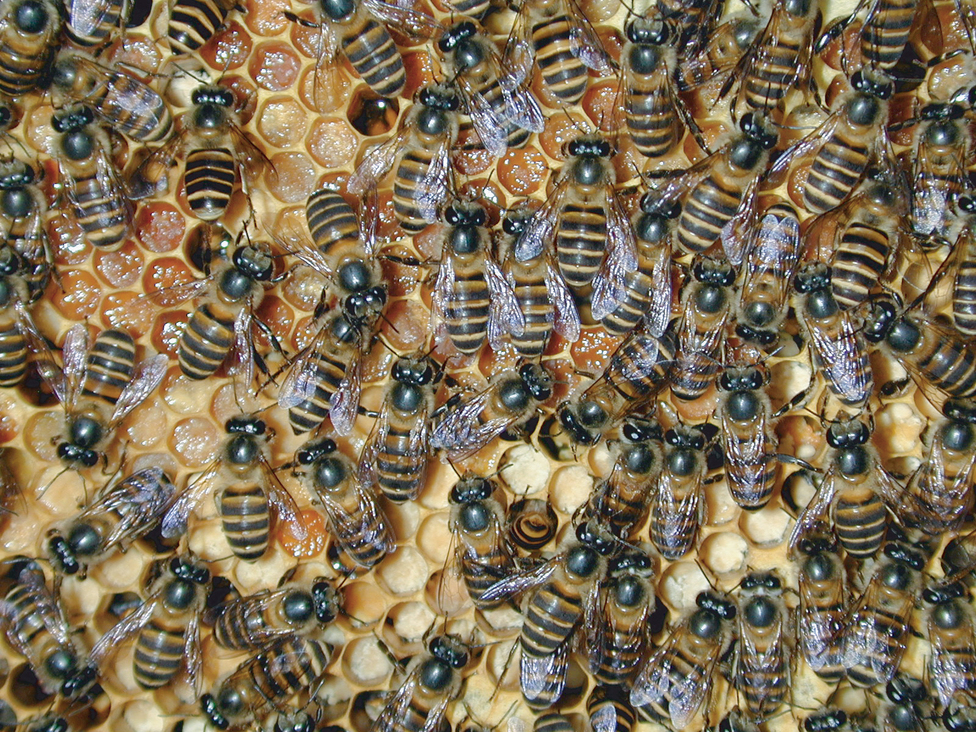 Honey bees: can’t live without ’em, not pleasant to live with their sting.

Contributing an estimated $4-6 billion a year to Aussie crop production as well as enabling us to eat and enjoy everything from apples to coffee, honey bees play a key role in all of our lives.

However, scoring 2.0 on the Schmidt pain index, their sting can leave you wishing for something a bit stronger than a soy latte. Schmidt describes the sting as akin to a “matchhead that flips off and burns on your skin”.

But help is at hand. “If you are stung, remove the sting as soon as possible to minimise the amount of venom injected,” Dr Yeates said. 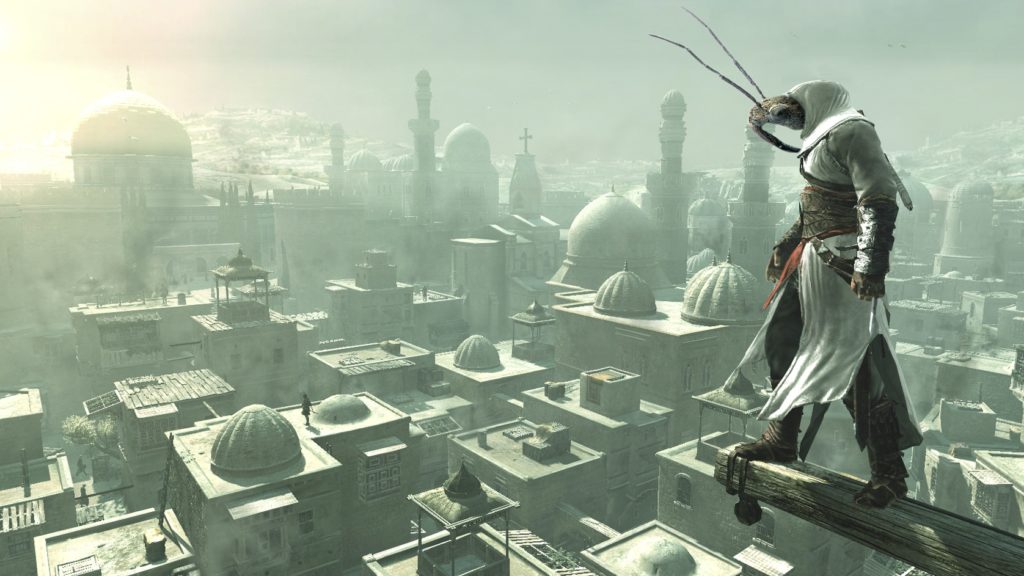 The Assassin bug surveys the town to locate the next piece of clothing to get caught up in.

Found in woodlands around the country, assassin bugs have one of the most menacing titles in the insect kingdom, however the pain from its sting is more mid-range.

“When they bite, assassin bugs can jam their proboscis into the skin and inject some nasty saliva that causes intense pain.” Dr Yeates said.

“But they’ll only bite when provoked, perhaps if they’ve became entangled in clothing, so be sure to check your washing.” 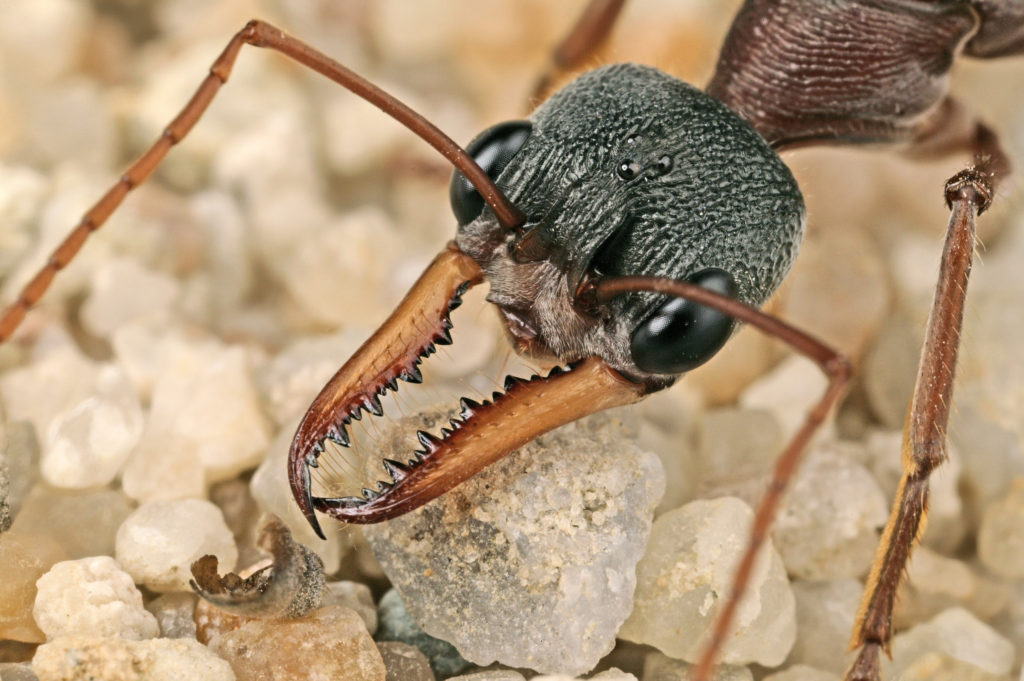 Interior designers at heart, bull ants like to decorate their nests with pebbles, twigs and other bits and bobs they can find. Some have even been known to heat their nest up by decorating the place with dry materials that heat quickly, providing their home with solar energy traps.

Brainy as they are, however, the Australian bull ant won’t be found wanting in the brawn department.

“The venom from Myrmecia stings are among the most potent in the insect world,” Dr Yeates said. “Some people can suffer anaphylactic reactions if they’re particularly sensitive to the sting, and bull ants have been responsible for human deaths in the past.” 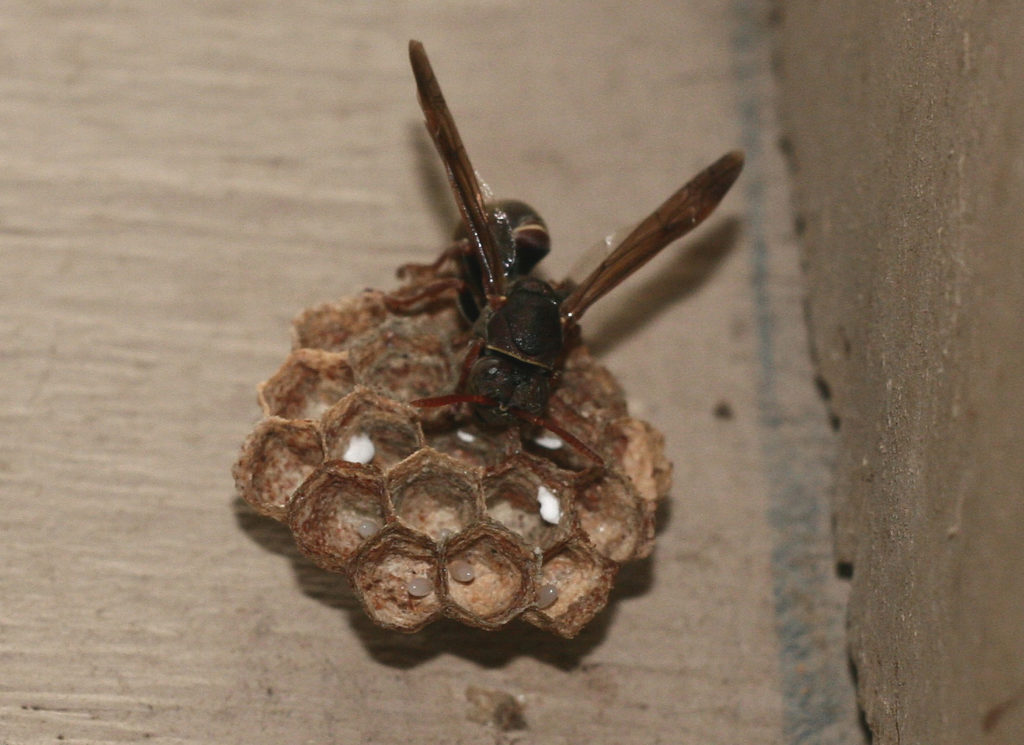 Nothing quite like reading “widespread in Australia” and “like spilling a beaker of hydrochloric acid on a paper cut” in the same sentence.

Widespread in Australia, the common paper wasp is renowned for delivering a painful sting when their nest is disturbed.

With a pain duration of up to 15 minutes, Schmidt awarded these bad boys a cool 3.0, describing the sensation as: “Caustic and burning. Distinctly bitter aftertaste. Like spilling a beaker of hydrochloric acid on a paper cut.”

In compiling his list Schmidt was stung by more than one hundred insects, but the stingless bee wasn’t one of them. A big fat zero for this one.

And our winner is… 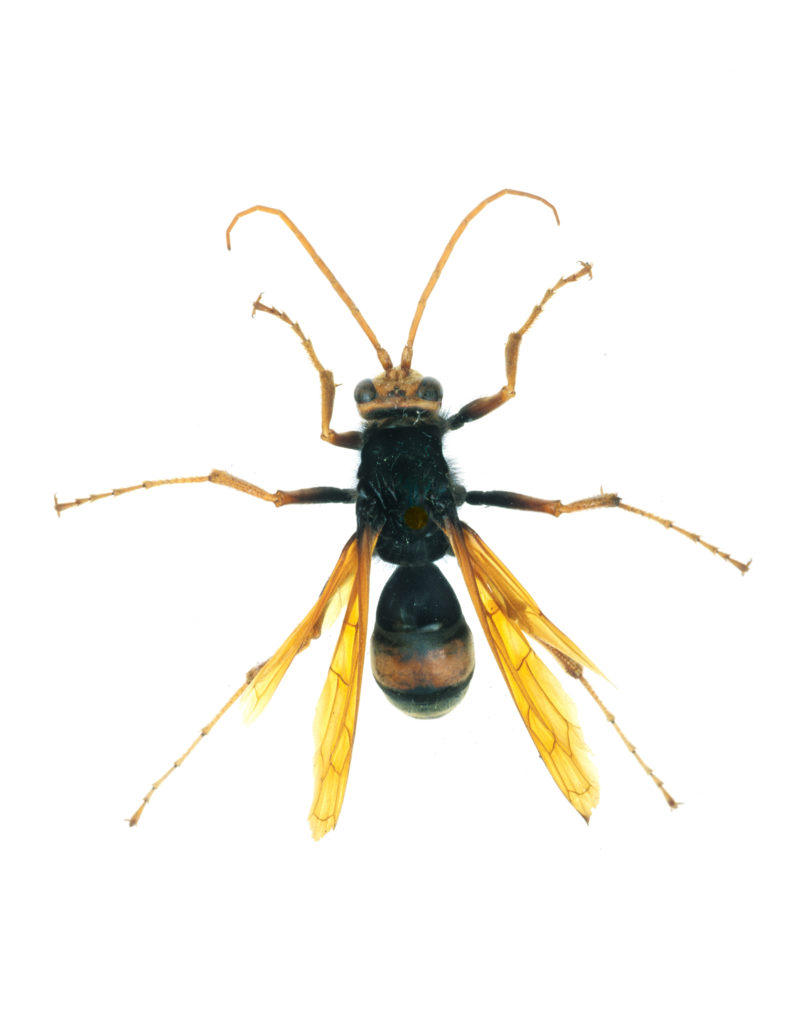 Found in urban areas, forests and wetlands throughout Australia, spider wasps are often seen dragging huntsmen spiders along to their nests to feed their larvae. The sting from a tarantula hawk, a member of the spider wasp family, was awarded a sizzling 4.0 by Schmidt, who likened it to a running hairdryer dropped into your bubble bath.

“Australia has a bit of a reputation when it comes to deadly animals, thanks to Bill Bryson and others,” Dr Yeates said. “We do have some animals and plants that can inflict painful stings, but most of these belong to groups that are found worldwide.”

“We should be grateful that we don’t have bullet ants*!”

If you’d like to find out more about Australian wildlife, check out the Atlas of Living Australia website.

* The bullet ant, native to Central and South America, topped the Schmidt pain index with a 4.0+ rating.

Previous post:
Major IMAS Investigator voyage to study impact of submarine volcanoes on ocean ecosystems
Coming up next:
The search for new elements on the periodic table started with a blast