The Dish: Fact vs fiction

The Dish: Fact vs fiction

The Dish is an Aussie classic, set at our Parkes radio telescope. Most of the film is based on fact, but what was added for the sake of a (rollicking) good yarn? 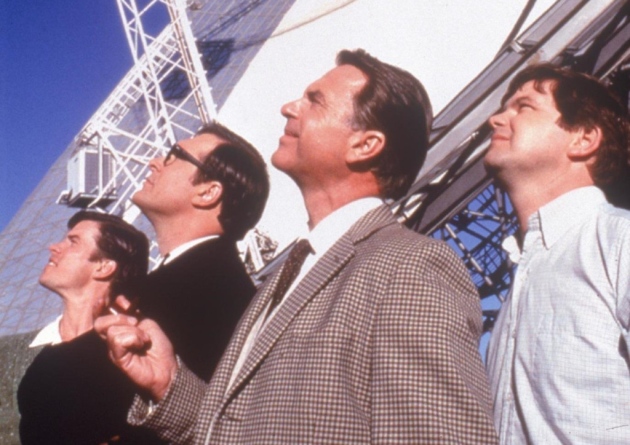 The Dish is an Aussie classic, set at our Parkes radio telescope. Most of the film is based on fact, but what was added for the sake of a (rollicking) good yarn?

“You treat us like a pack of galahs. [That’s a kind of parrot.] Just because I don’t wear a tie or spend all day buried in a manual doesn’t mean I’m a drongo. [That’s a hopeless …]”

What’s your favourite line from the movie ‘The Dish’?

Created by Rob Sitch and the Working Dog Productions team, the 2000 film is an Aussie classic. It features Sam Neill, Tom Long and Kev Harrington as staff at our Parkes radio telescope, in rural New South Wales, and how they supported receiving and relaying the live TV broadcast images of the Apollo 11 Moon landing.

The Dish is loved by audiences and critics: David and Margaret both gave it 4.5 stars! We love the movie so much we thought it’d be fun to take look at what’s fact and what’s fiction, all in the name of a good story, of course.

1. “We’re in the middle of the greatest feat ever attempted. This is science’s chance to be daring.”

The Parkes radio telescope did support the Apollo 11 mission. Affectionately known as ‘The Dish’, our telescope tracked Apollo 11 throughout its journey, gathering voice signals from the astronauts, telemetry from the spaceship, and the television signals from the moonwalk itself. It’s true that our help was needed to support NASA’s Honeysuckle Creek and Tidbinbilla facilities near Canberra, and the Carnarvon station in Western Australia. The signals from NASA’s Goldstone, USA, tracking station did “disappear into the ground” on the day. The film also showed a realistic representation of the Parkes control room and how our staff operated the telescope.

Radio telescopes like Parkes can be buffeted by wind just like your umbrella on a windy day. These days the telescope is automatically ‘parked’ at winds of 35km/hr. On the day of the moonwalk it was gusting 100km/hr! And it kept blowing a (bloody) gale throughout the moonwalk! The observatory’s then-Director, John G Bolton, made the decision to keep pointing in the wind. Luckily, it all turned out for the best! Watch former Parkes electrical engineer David Cooke talk about the storm.

3.   “They’re walking early. Armstrong overruled the sleep break … He said, ‘We don’t want to sleep. We want to walk.’”

It’s true, the astronauts did walk ahead of schedule. 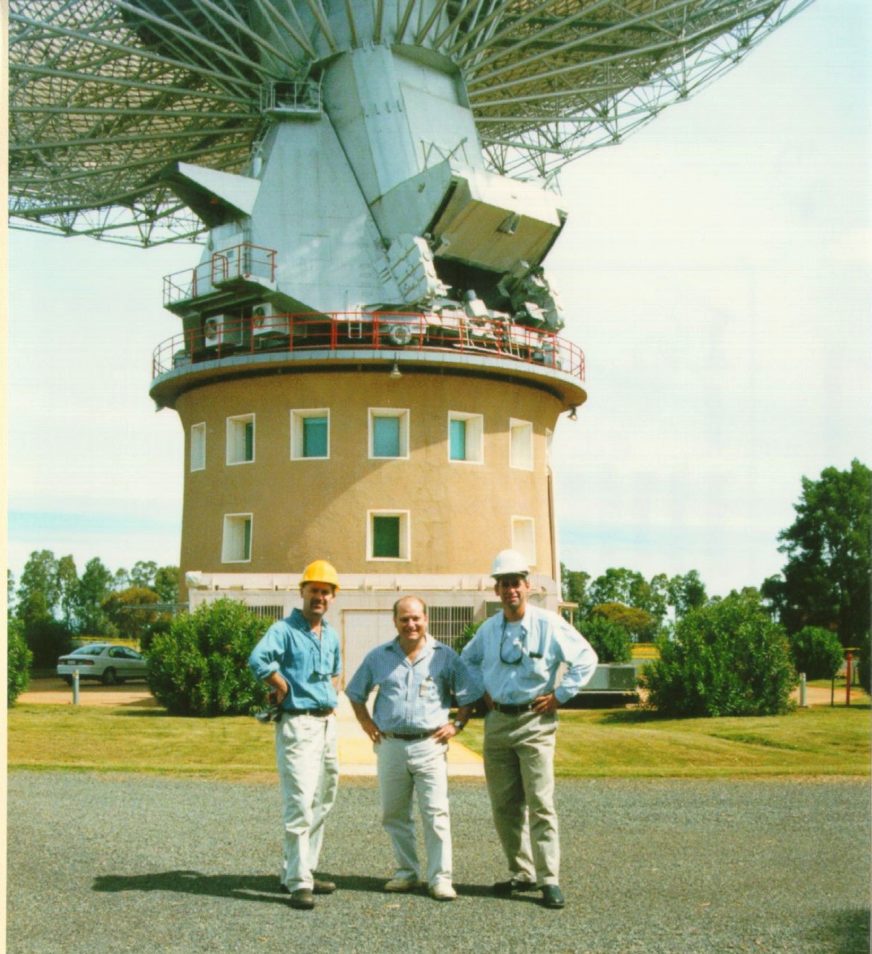 Three men stand in front of the Dish in an old photo.

Throwback to the filming of The Dish. Working Dog Production’s Tom Gleisner (left) and Rob Sitch (right) with John Sarkissian, our Operations Scientist at the CSIRO Parkes Radio Observatory.

And what’s fiction? (To make a good story!)

1. “Honeysuckle Creek, they also have voice and telemetry, yes?”

The movie’s biggest departure from real events is that it gives all credit to the team at the Parkes telescope. In reality, the team at NASA’s Honeysuckle Creek tracking station near Canberra as well as other facilities around Australia – including Parkes – all played important roles in supporting the Apollo 11 mission.

The first minutes of the televised broadcast of the Moon landing were received via Honeysuckle Creek, including Neil Armstrong’s iconic ‘One giant leap’ moment. The staff at Honeysuckle also helped to broadcast the historical live television coverage around the world. It was a team Australia effort! And the congratulatory telegram from NASA included many more players than just Parkes.

Sadly, our staff never played cricket on the Dish. The actors did film this scene on the actual telescope, but they had to be very careful around the equipment and only use a tennis ball. Howzat for a fun film fact? 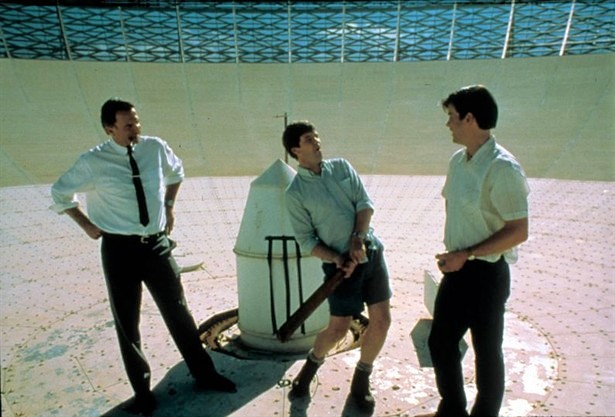 That's not cricket! Sadly our staff did not actually play cricket on the dish. Howzat for a spoiler?

That’s not cricket! Sadly our staff did not actually play cricket on the dish. Howzat for a spoiler?

3. “I thought there’s an uninterruptible power source. [UPS]” “It was designed as a UPS, but, um, the generator didn’t kick back in … ”

We do have a UPS and backup diesel generator, but there was no power failure. All in all, quality control and foresight at Parkes were much greater than the shemozzle shown in the movie. Such was his dedication and thoroughness, Parkes Observatory Director John Bolton actually had his team practice hand cranking the radio telescope to keep the lunar module in range in the event of a total power failure.

4: Young journalist: “Can I have their full names and specific roles?”

The staff names and personas are fictionalised. The real Director, John Bolton, passed away in 1993. His wife, Letty, now lives interstate and visits occasionally.

5: “What do I care if some bigwig Yank sees I love my wife?”

There was no animosity with American visitors: we worked together, and learned from each other. In fact, in real life there were many more NASA staff present than the one man, ‘Al Burnett’, played by Patrick Warburton in the film: it was a large team effort. Almost 50 years later, we’re still working with NASA, sharing expertise and exploring space together.

The film starts off with the Prime Minister not knowing about Parkes. In fact, the PM knew all about our telescope — half the telescope’s construction funds came from the Australian Government. On the day of the Apollo 11 Moon landing, Prime Minister John Gorton made a surprise visit to Honeysuckle Creek, not Parkes. 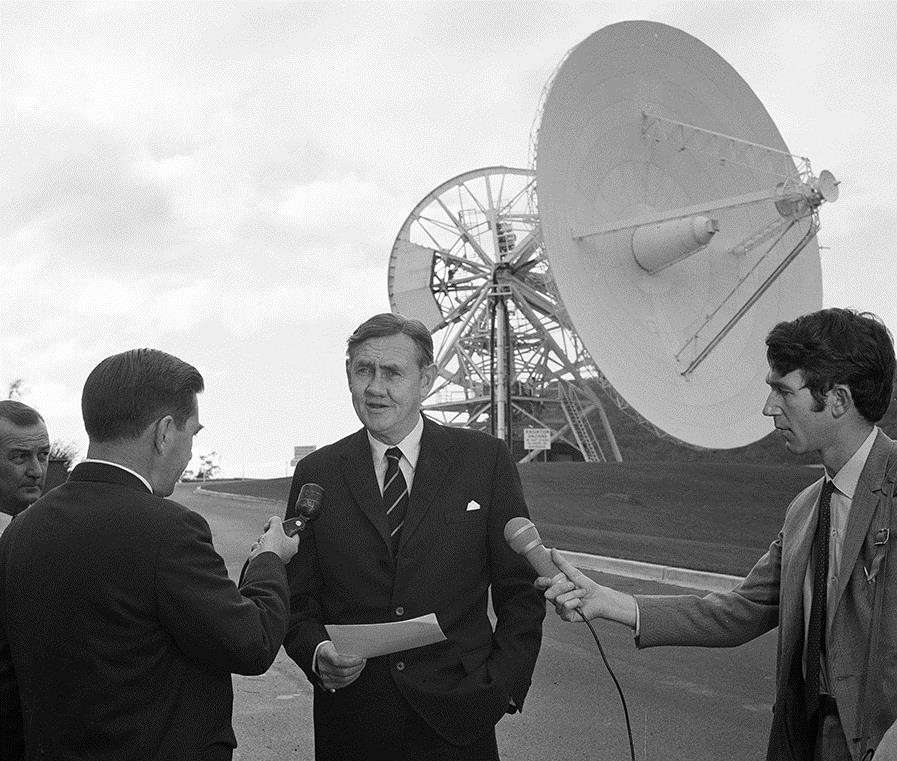 Hmm … the dish is big, but not that big. With a diameter of 64 metres, Parkes is one of the largest single-dish telescopes in the southern hemisphere dedicated to astronomy. Don’t believe us? Come and see for yourself!

See The Dish for yourself!

Join us on 20 and 21 July 2019 for your chance to tour The Dish! To celebrate 50 years since the Moon landing, we’re holding a weekend of open days at the Parkes Observatory. You can come and see where history was made. The weekend is free, and there’s no need to register!

There will be tours of The Dish, talks by Aussie-born NASA astronaut Dr Andrew Thomas, daytime stargazing, roving performers and musicians, face painting, food, astrophotography, and more. Best of all, you can watch The Dish on Saturday night. Roy Billing who plays Parkes Mayor Bob McIntyre in the film (“Elbows, darling”) will introduce the open-air screening. Bring your scarf and beanie!

And on Sunday, you can watch the broadcast of the Moon landing as it happened, exactly 50 years before, at 12.56pm (AEST). And if you’re still confused about our role in the Apollo 11 mission, well, “just imagine the Earth is a basketball…”.

A group of kids, adults and an astronaut jump for joy in front of the Dish.

These facts were taken from the book “Parkes: 30 Years of Radio Astronomy” available through the Parkes Radio Telescope Visitors Centre, $30.

Previous post:
A lunar powerhouse: The Apollo 11 exhibition lands in Sydney
Coming up next:
Our future in drought