The blue bottles are coming, but what exactly are these creatures?

The blue bottles are coming, but what exactly are these creatures?

What exactly are blue bottles? Are you really supposed to pee on their stings? How do you keep a day at the beach from turning into a real pain? We take a closer look at these mysterious sea dwellers. 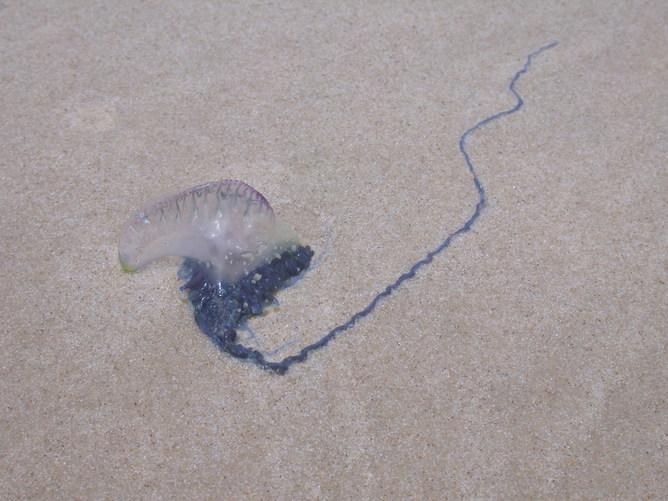 Beautiful to look at… but perhaps not so much if you’ve been stung before.

Blue bottles have been washing up on Sydney and surrounding beaches by the bucketload recently. With their annual arrival, many questions and myths about these creatures seem to be drifting around as well.

What exactly are blue bottles? Are you really supposed to pee on their stings? How do you keep a day at the beach from turning into a real pain?

Let’s take a closer look at these mysterious sea dwellers.

What are blue bottles?

Blue bottles are siphonophores, a weird group of colonial jellyfish. Rather than being a single organism like the jellyfish we commonly recognise, siphonophores are actually made up of several colony members called persons (sometimes also known as “zooids”). These members typically include feeding persons, reproductive persons, and stinging persons, among others.

Some siphonophores, such as the blue bottle, also have a gas-filled bladder (another person), while others instead have swimming bells similar to jellyfish; a few have both. 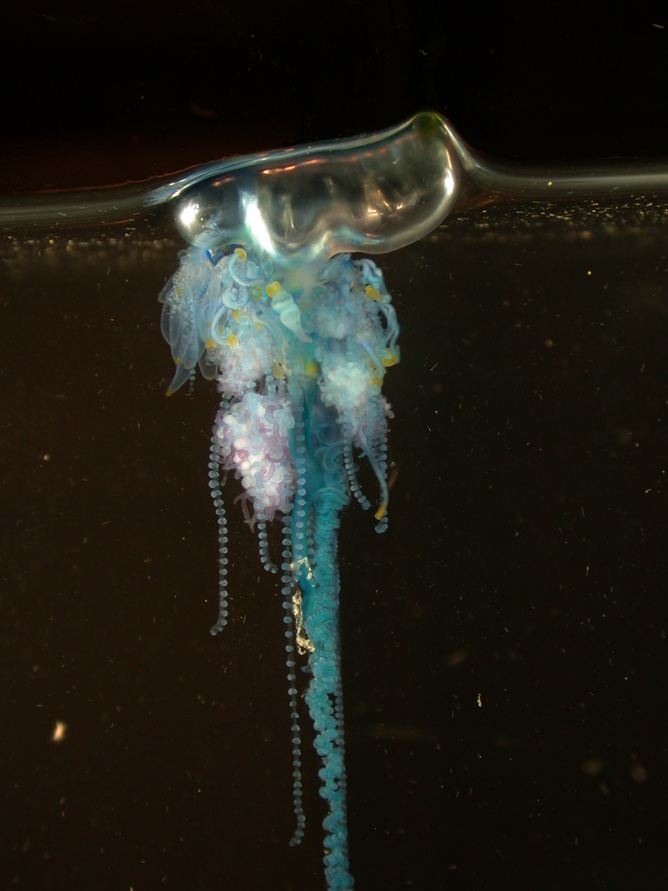 In fact, siphonophores have mystified evolutionary biologists since the nineteenth century. Debate has periodically raged on whether they are an individual or a colony. Like a colony, they share resources and have repeating parts that function independently, but like an individual they cannot survive if separated.

Peculiarly, siphonophore reproduction (or at least what we know of it) is actually far more familiar to us than for most other types of jellyfish. The reproductive persons release eggs and sperm into the water. When they meet, the resulting embryo grows into a tiny blue bottle just a couple of millimetres long. Then as it grows it adds more groups of persons by cloning.

The most common blue bottle in Australia is Physalia utriculus, a small relative of the larger and more venomous Portuguese Man-o’-war from the Atlantic (P. physalis). P. utriculus typically reaches a bladder length of about 6 cm, and conspicuously has only one main fishing tentacle that grows up to a metre long (plus a few other smaller tendrils and fringy bits). We have other species too, but they are far less common.

One of the most intriguing things that curious beachcombers may notice is that almost all of the blue bottles of a single stranding will have their keel-like crest angled the same direction relative to the main body axis, but those from different strandings may be angled either way.

Out in the open ocean where blue bottles live, each armada (the collective term for blue bottles) has both left and right handed forms. But when a breeze kicks up and drives them toward shore, only those with the crest facing the right direction to catch that particular breeze will sail toward their death. It seems that this is nature’s way of ensuring that some survive.

Blue bottles are strikingly beautiful. The air bladder is pearly blue, while the tentacles are intense peacock blue or dark teal. This shade of blue is common in animals that live at the air-water interface, and is thought to protect them from UV damage and possibly aid in camouflage.

Other creatures that live in this unusual habitat include the By-the-wind Sailor (Velella velella), the exquisitely beautiful Purple Bubble-raft Snails (Janthina sp.), and the highly unusual Sea Lizards (Glaucus and Glaucilla), which are actually sea slugs that consume and store undischarged stinging cells from jellyfish such as blue bottles for their own defence. 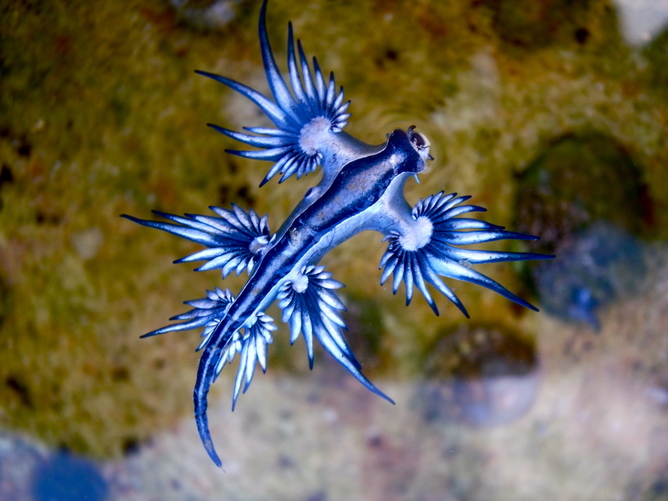 Sea Lizards feed on the stinging cells of blue bottles to use them for their own defence. 87895263@N06/flickr, CC BY-SA

Sea Lizards feed on the stinging cells of blue bottles to use them for their own defence. Flickr – CC BY-SA

In the water, a given blue bottle might not be so easy to see at the far end of a metres-long tentacle, but generally they travel in numbers, so earlier arrivals may be observed strewn along the beach.

When these organisms are stranded, there is one rule to avoid a nasty sting: don’t touch them! They can deliver painful stings long after the organism has died, through mechanical action of their hair-trigger-laden stinging cells.

Vinegar is the usual treatment for some types of jellyfish stings because of its acidity (or, more accurately, because of its acetic acid content). And as urine is a weak acid, people often assume it will be just as effective. Is this true?

Well no, not really.

Vinegar works well to inhibit stinging cell discharge in box jellies and Irukandjis, and in some blue bottles, but in others it actually stimulates discharge. For this reason it is not recommended for confirmed blue bottle stings.

To make things more complicated, urine can be either acidic or alkaline. For species neutralised by vinegar, urine is only about 25% as effective if acidic, and it may stimulate discharge if alkaline.

So you need to ask yourself: are you feeling lucky?

A much better treatment for blue bottle stings, and the one advocated by the Australian Resuscitation Council, is to rinse well with seawater to remove microscopic stinging cells, then use hot water or ice for the pain.