Women krilling it in Antarctica

Women krilling it in Antarctica

In the icy waters off Antarctica, a team of women are leading the way while trawling for answers about Antarctic krill.

Thousands of miles from home, researchers on-board our Research Vessel (RV) Investigator are conducting important research for the Australian Antarctic Program. They are investigating a tiny – but critical – species that lives in the icy waters off Antarctica. Antarctic krill.

Antarctic krill are small, shrimp-like crustaceans (also known as Euphausiids). Krill are a keystone species of the Antarctic ecosystem.

While they may be small, Antarctic krill can form super-swarms tens of kilometres in size and more than a hundred metres deep. These swarms can be so big they can be seen from space! 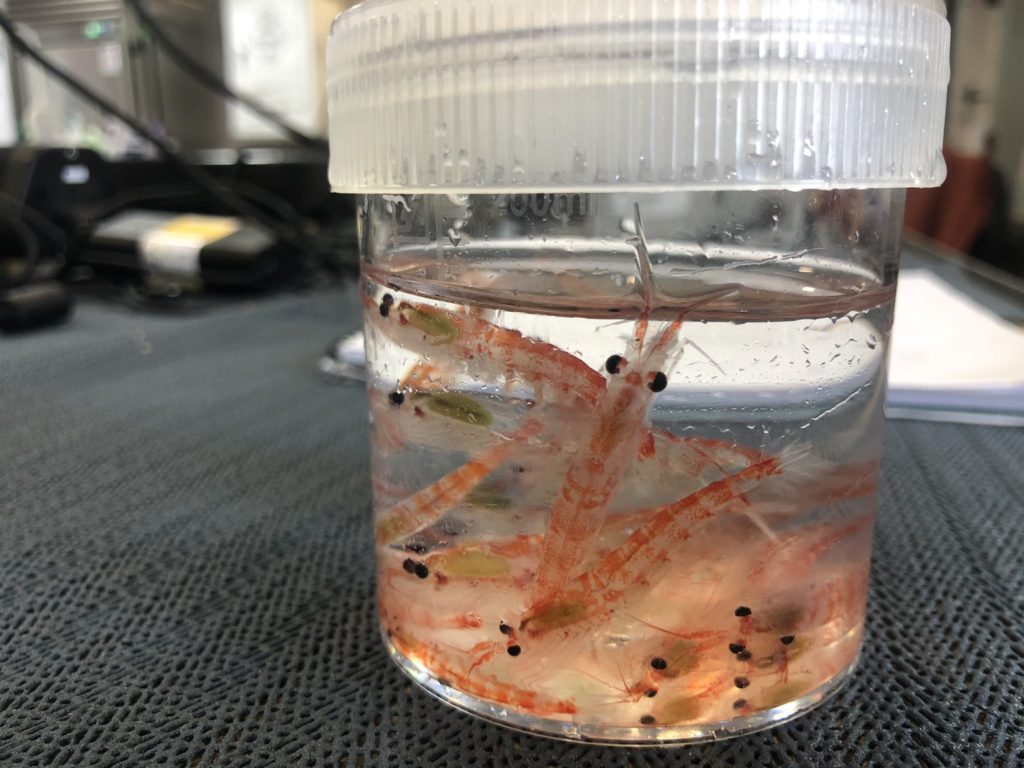 Krill are a keystone species in the Antarctic ecosystem.

Scientists estimate there are more than 400 million tonnes of krill in the Southern Ocean around Antarctica. This is equivalent to the combined weight of every person on Earth!

Krill are also the target for the largest commercial fishery in the Southern Ocean. However, for krill to be sustainably fished, we need to know how much is safe to catch without leaving predators hungry and harming the environment.

That’s the question those on board RV Investigator are working to help answer in a project called TEMPO (Trends in Euphausiids off Mawson, Predators, and Oceanography). They are on a 60-day voyage to measure Antarctic krill from all angles in waters off the coast of East Antarctica. 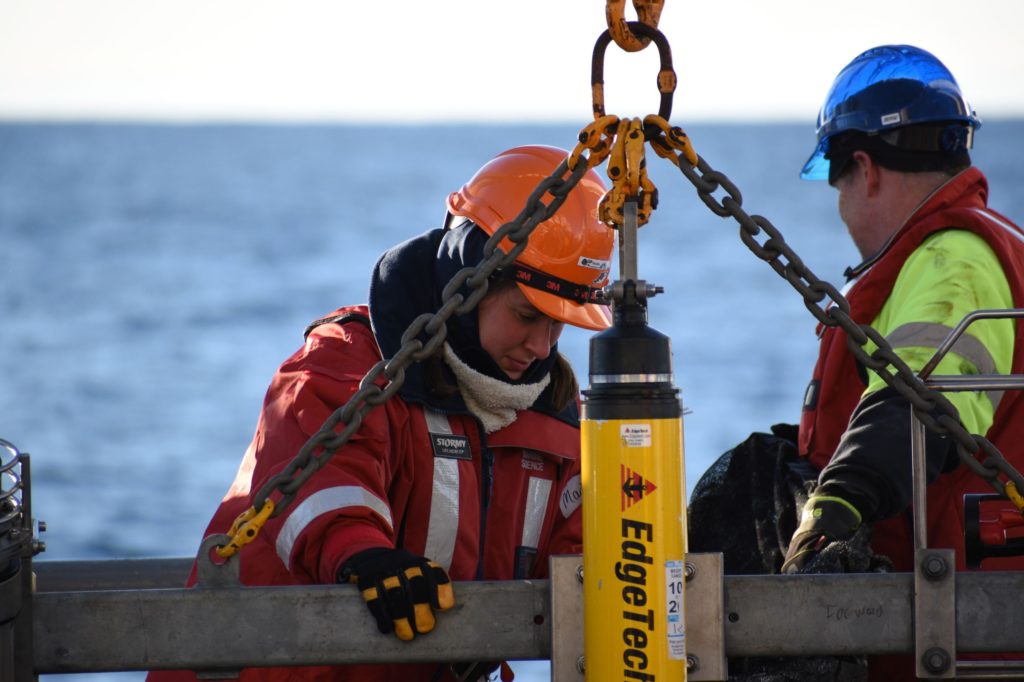 One group of researchers on-board is on a mission to learn more about krill biology and lifecycle. They conduct targeted trawls using specialised nets to collect live krill for study. These trawls are often carried out at short notice when swarms of krill are seen on the ship’s echosounders.

Last week, the trawl team sprang into action in the early hours of the morning. A big swarm of krill had appeared on the monitor! The trawl was planned and delivered, resulting in a good catch of krill for study.

But something noteworthy also happened on that day.

All in a day’s work

No-one really noticed at the time that anything special had happened. It was just another busy day at sea, with everyone working together to get the job done.

But an event was worth noting – and a sign of positive change. A record was made in the daily sitrep to acknowledge those involved:

Sophie (IMAS/AAPP) was in the alternate Chief Scientist role. Abbie (IMAS PhD candidate and acoustician on board) located the target on the echogram. And Jess (IMAS PhD candidate, krill team leader for night shift and gear officer) called for a target trawl. Amy (CSIRO GSM) provided acoustics support and marked the location of the target. While Abbie used the sonar to provide information to the ship’s bridge for the exact direction to the target swarm. Maddie (IMAS junior researcher and krill biologist) operated the net from the operations room and gave directions to the ship crew on the winch.

The whole operation was coordinated by women – perhaps for the first time. 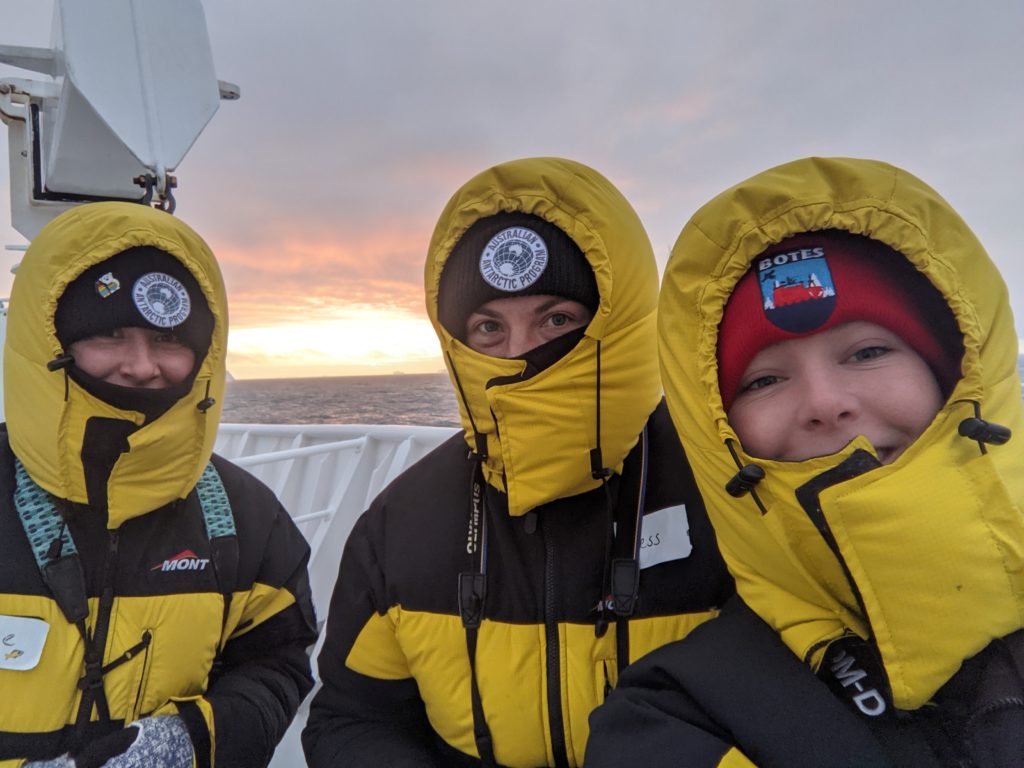 Diversity for the win

Dr So Kawaguchi, voyage Chief Scientist from the Australian Antarctic Division, said while this might be the first time that an all-women ship operation of this type had occurred, it should only be the first of many.

“This special moment is worth celebrating, as a great example of all-women operations in the Australian Antarctic Program. But it also offers an opportunity for us to consider what changes we need to keep making in our workplaces to ensure that events like this become the norm in future,” So said.

Linda Gaskell, our Voyage Manager on RV Investigator, said more women are filling all roles on our voyages.

“These events will become commonplace, as long as we keep taking real action to ensure that talented women like these PhD candidates and postdocs are retained in the STEM disciplines,” Linda said.

After all, we know nature, science, and workplaces all benefit from diversity.

Researchers study the krill collected during trawls to measure the krill size, volume, sex and maturity stage. This helps us better understand the population characteristics of swarms.

These studies will increase understanding of Antarctic krill and the structure of krill swarms. They build on data collected about krill swarm distribution in the Southern Ocean. This knowledge will be vital for informing policy makers to ensure sustainable krill fisheries management into the future.

All with the help from a diverse group of women who are krilling it in Antarctica. 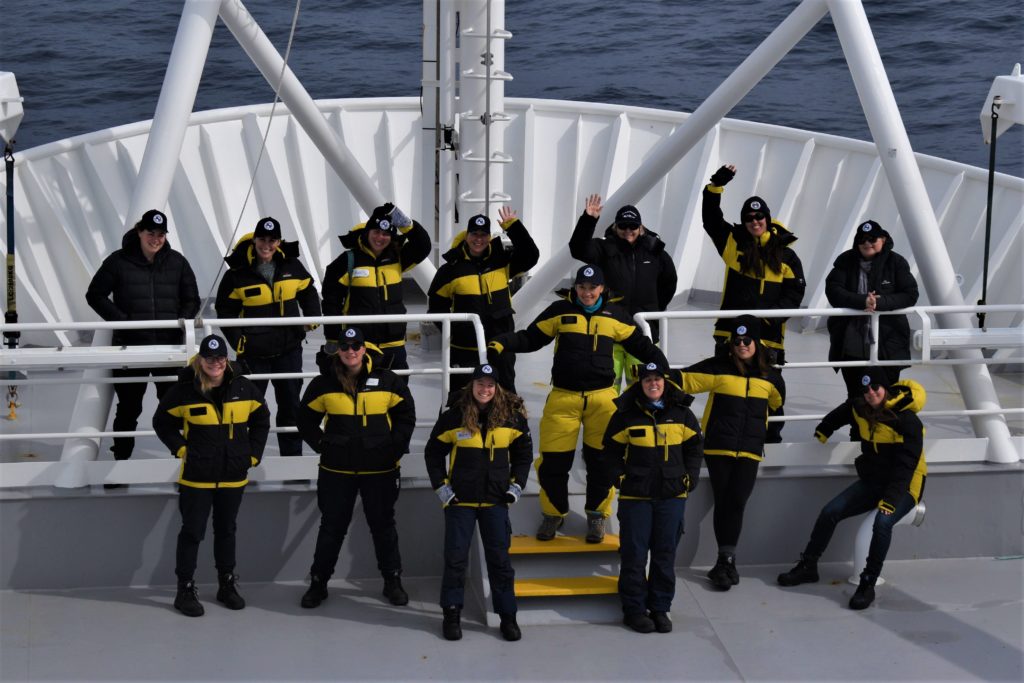 Women of the TEMPO science team gather on the bow of RV Investigator. Image: So Kawaguchi.

On this voyage, women account for 11 of the Australian Antarctic Program’s research team of 20 (as well as several voyage support staff and ship crew).

Dive into the world of krill

Previous post:
We’ve made progress to curb global emissions. But it’s a fraction of what’s needed
Coming up next:
Growing the next generation of environmental scientists