With more electric vehicles on our roads, our habits will change. Soon, we’ll be able to use solar and battery to charge our vehicles, and new tech means smoother charging in warm weather, using energy from our very own homes. 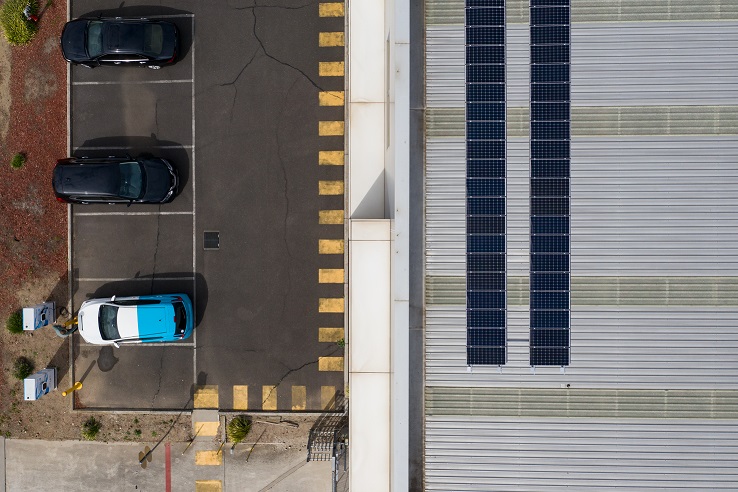 Solar panels on the building power the charging modules, which also contain a battery and our smart charging technology.

You’re cruising home after a long day at work. The orange fuel light starts blinking. It’s your car reminding you there’s only 20km left in the tank.

Traditionally, your next step would be to manoeuvre through peak hour traffic, sigh inwardly at the advertised fuel price, fill up and then be on your way… only to do it all again two weeks later. But with electric vehicles (EVs) gaining traction, this routine will change. Our new technology can help make this process even greener.

It’s new, it’s exciting. It’s solar-powered electric vehicle charging. This new system links your rooftop solar with a battery system and smart technology to manage the way your car is charged. Plus, it’s designed with the Australian household in mind.

There are many benefits to this system, which we’ll explain further below. 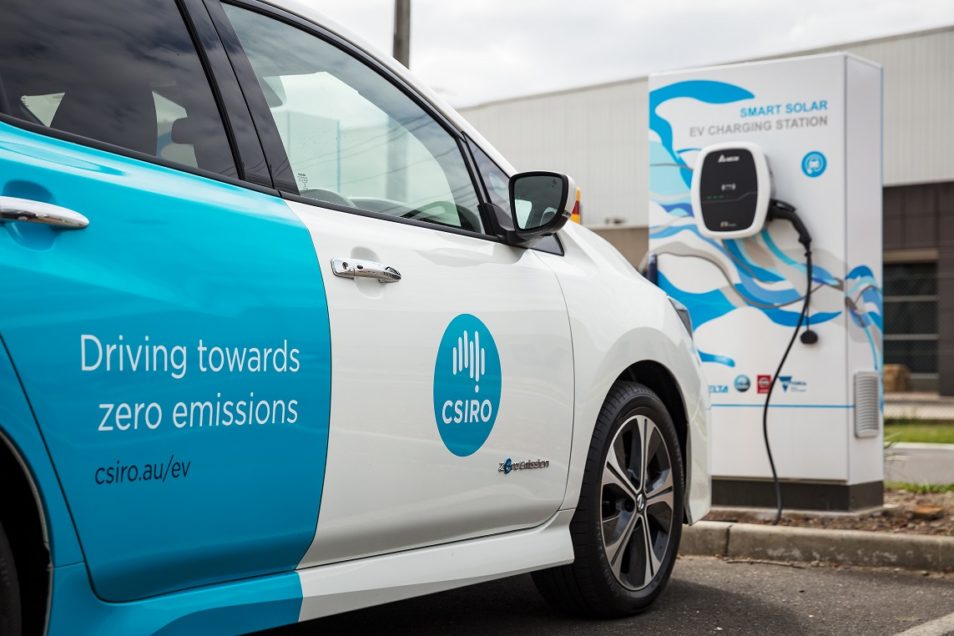 With renewable-powered charging technology, we really are driving towards zero emissions.

Transport is Australia’s third-largest source of greenhouse gas emissions. And it’s increasing faster than in any other sector. Electric vehicles can make a huge impact here. They’re a cleaner option, even from using only grid power. But instead of using grid power, it makes sense we start using the power generated from Australia’s two million+ homes with solar photovoltaic panels.

You can store the solar energy you collect during the day in a household lithium-ion battery. This allows you to stash the energy away for later in the day when you plug your electric vehicle back in.

Our EV researcher Dr Christopher Munnings has done the maths and the argument for solar-powered charging stacks up. He said it’s a prime example of what’s called a ‘hybrid system.’ There we use multiple solutions (solar, battery, electric vehicle) for a positive result (lower emissions from transport). This is the type of research Chris performs in our Centre for Hybrid Energy Systems.

“Once you’re charging on renewables, the argument is pretty clear. An EV will emit less CO₂ over its lifetime than a regular internal combustion engine. If you recycle or reuse your batteries the numbers get even better,” Chris said. 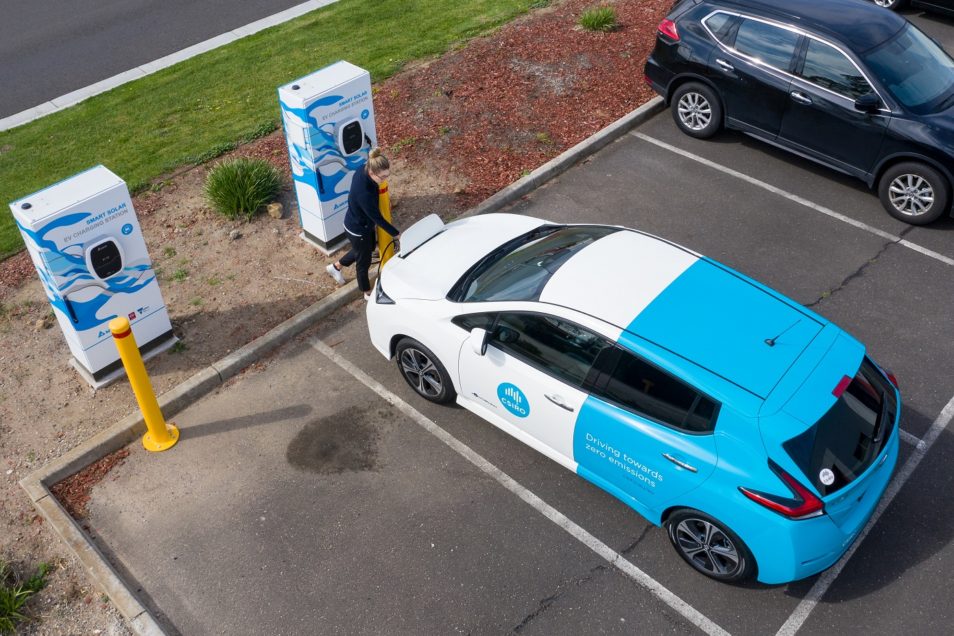 It’s as easy as ‘point and shoot’, and overnight charging will become second nature.

Home is where the charge is

For most electric vehicle users, around 90 per cent of charging will be at home, meaning no peak hour detours to the servo. You’d likely go home as normal, plug the car in, and not think twice until you come back in the morning. Then your car will be charged and ready to roll – just like our mobile phones.

Australian city-dwellers drive an average of 30-40 km each day. Modern electric vehicles have a range over 250km. So, depending on your driving habits you may only need to charge an electric vehicle once or twice a week. After a while, it will become second nature to plug in daily.

What happens if we’re all charging our electric vehicles at once?

It’s possible the electricity grid could become stressed from the demand as more of us plug in our EVs each evening. This could be compounded during warm weather when the grid is under the most strain.

It’s also possible your household would want to charge more than one EV at a time with a standard grid connection. If this is the case, you’ll struggle to have enough spare power to run anything else. Like your air-conditioner, hairdryer and popcorn machine. You know, the essentials.

We’ve developed a new technology that controls when to charge your car, how quickly, and from which source (solar/battery/grid). It can also multi-task by charging up to four vehicles at a time. This is great for locations with limited grid connection, like at home, a shopping centre, or somewhere remote. This means a stress-free evening without having to reset fuses. It’s also great for the grid, which gets a smoother ride with no dramatic increases in power demand. 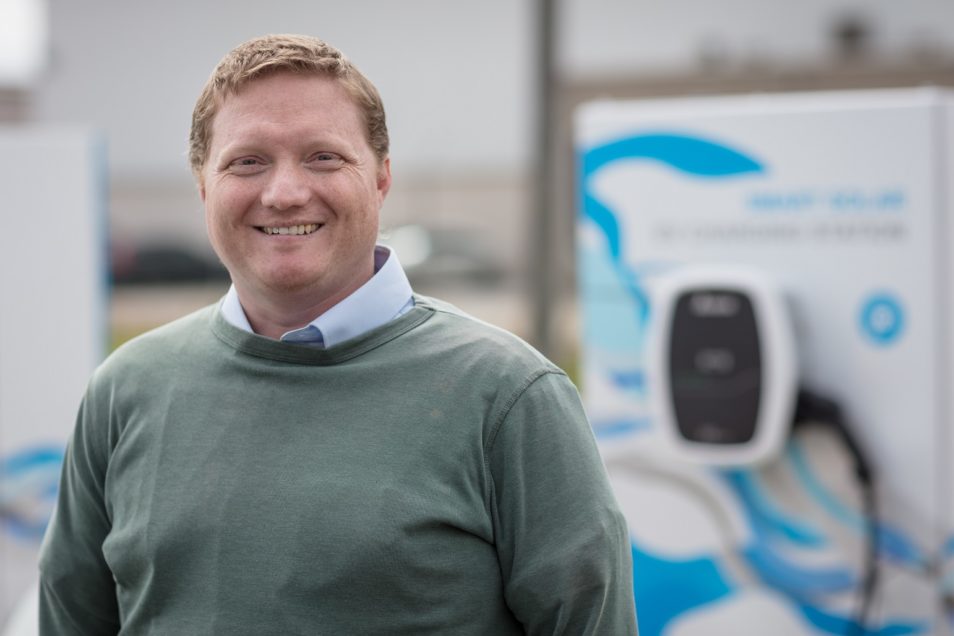 Our Senior Researcher Dr Christopher Munnings is plugged into all things ‘electric vehicles’.

Our electricity grid isn’t the only concern in warm weather. Often, battery systems can be less effective when the weather’s hot. When you need your car completely charged, this can quickly become an issue.

Our EV expert Chris said: “A normal household battery system is typically not powerful enough to charge a car on a hot day as it can overheat and slow down.”

“Our solar charging system can manage the temperature of the battery, minimising the amount of power required from the grid.”

“In a multi-EV home, this system will automatically monitor each car, spreading the load between the battery, solar PV and the rest of the home. This means the cars charge as quickly as possible, using as much sun as possible, without the need to upgrade grid connection.”

How do we know it works? We helped put the systems through their paces by installing three solar charging modules at Nissan Headquarters in Dandenong. Each module is capable of charging four vehicles at a time. They’ll be evaluated over 200 days, including the peak summer period. We look forward to reporting back and sharing what’s next for this exciting tech.

The project was funded by the Victorian Government and undertaken in collaboration with Delta Electronics and Nissan. Our researchers developed and tested the system and implemented the thermal management controls.

Want to plug into more energy info? Let this be your outlet