There's a world to know about marsupials. But in lieu of that, here are 14 facts. 1. There are three groups of mammals, and the marsupials are one

All mammals are either Monotremes (echidnas and the platypus), Marsupials, or Placentals (us and dogs and monkeys and things). The lion’s share of mammal species are placentals (around 4,000 species).

2. Kangaroos, koalas, and wombats aren’t the only species of marsupial 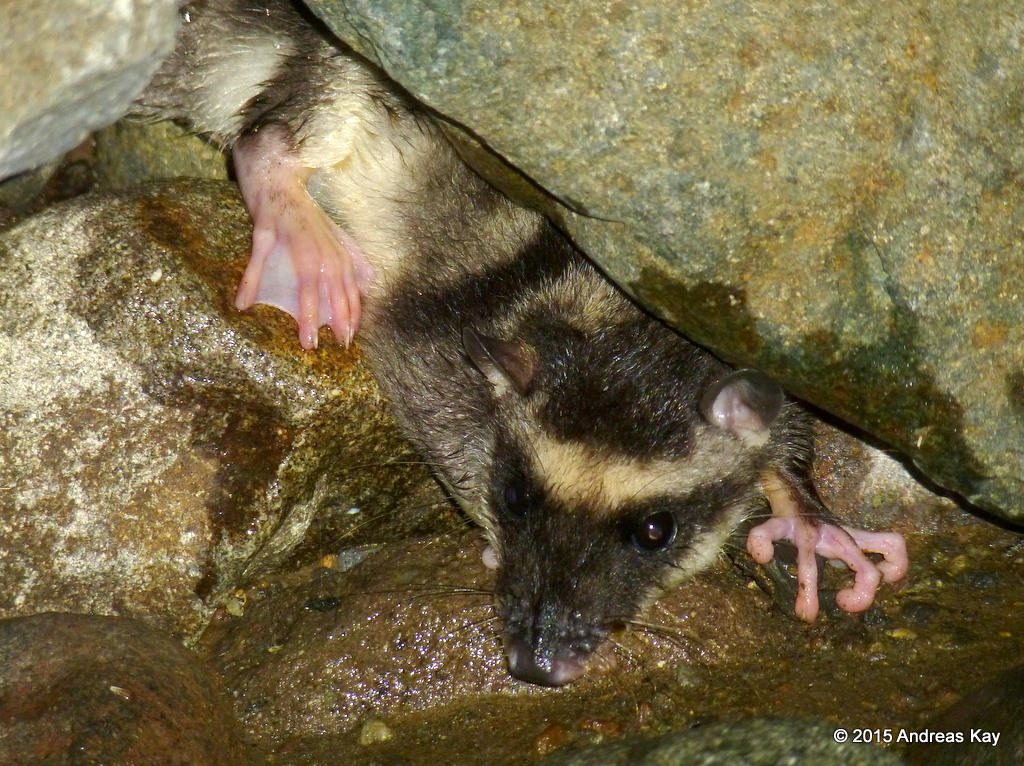 Like an excited kid putting their flippers on too early, this is the yapok — the only aquatic marsupial. It can be found in freshwater streams from Mexico to Argentina. Flickr/Andreas Kay/(CC BY-NC-SA 2.0).

There are over 330 species of marsupials. Around two-thirds of them live in Australia. The other third live mostly in South America, where some interesting ones include the flipper-wearing yapok, bare-tailed woolly opossum, and don’t get too excited, but there’s also the gray four-eyed opossum.

‘Placental mammals’ — rabbits, tigers, elephants, blue whales, and of course, you and me — keep their baby/babies in their uterus for a long time with the baby feeding from a placenta (a type of belly yolk) via the organic crazy straw known as an umbilical cord, until the offspring comes out pretty much as a fully formed individual ready for Sudoku and tax time. Marsupials, on the other hand, have a short-lived placenta that nourishes their young for just a few days before they’re born, the rest of their nutrition coming from the mother’s (pouch-obscured) teats.

4. Marsupials give birth only a month after conception

Baby marsupials are born early-on in development, even before they’ve developed eyes or hind legs. Babies exit the vagina as a red jellybean-sized Stallone and must climb up the mother’s front and into her pouch — a journey many times the body length of the one month old foetus — where they cling to a nipple for milk. In lieu of the placenta, the mother’s milk nourishes the young and allows it to grow and develop.

5. Spring cleaning in the pouch

Researchers can tell when a mother marsupial is expecting because she begins preening her pouch. Before a new embryonic joey can climb into the pouch to suckle, the mother has to make way for the new kid, cleaning out her pouch and the previous joey’s belongings: posters, old clothes, trophies. (Not really, it’s mostly pee and droppings and she has to lick it clean.)

During the dinosaurs’ final days, the ancestors of marsupials were huge in South America. Since they didn’t have placental mammals to compete with, there were sabre-toothed marsupials, ferocious bear-like marsupials and more. At this time, South America was attached to Antarctica. Previously, these two were also attached to Australia in the conjoined triplet super-continent, Gondwana. Unfortunately, the continents had already had a messy break-up: South America and Antarctica took the marsupial kids and left Australia in the cold with fewer marsupial groups (though not as chilly as Antarctica).

7. Fuzzy Shackleton — potentially all of Australia’s marsupials are descended from one species 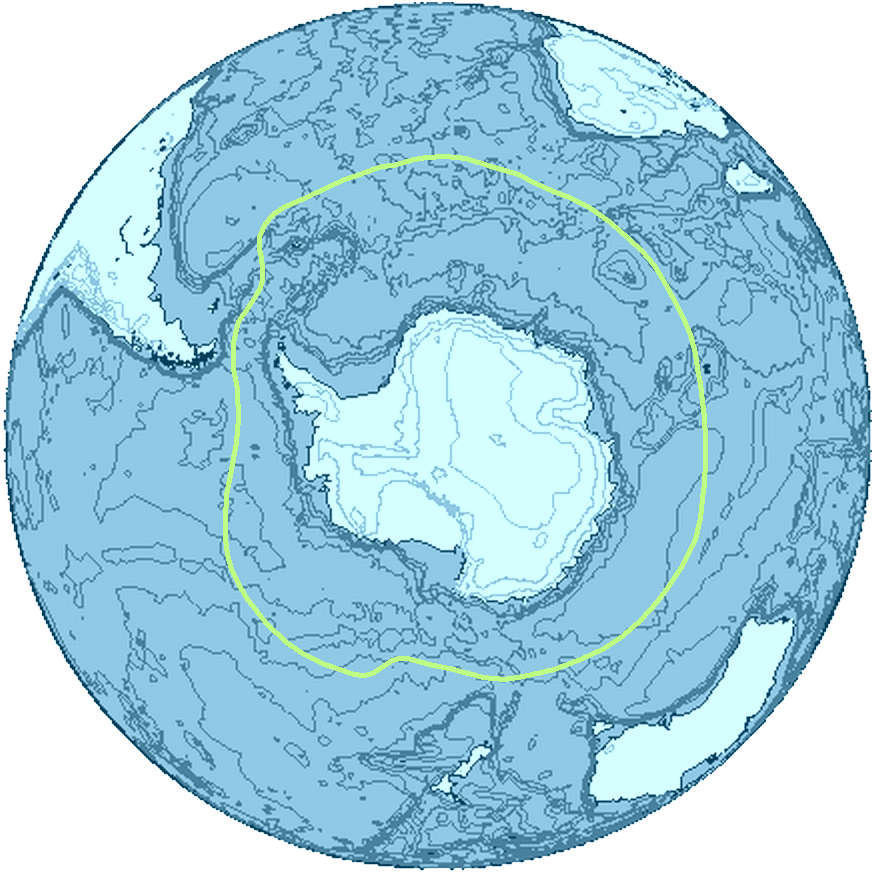 Earth from below with Antarctica in the centre. To the top left is South America, previously connected to Antarctica. And to the bottom right is Australia, and the Southern Ocean, fared by the ambitious grandparent of Australia’s extant marsupials. Wikimedia Commons.

The separation of Australia from Antarctica occurred around 80 million years ago. Seafloor spreading had pushed the two continents away from one another, filling the gap with an ocean about 100 km wide. By around 55 million years ago, Australia was populated by marsupials that would have made their way here over Antarctica and probably the Southern Ocean. The origins of these marsupials are foggy, but they may have descended from this single Antarctic-crossing group.

The largest extant (opposite of extinct) marsupial is the red kangaroo. The largest confirmed male red kangaroo stood at 2.1 metres tall. The smallest extant marsupial is the long-tailed planigale. This planigale’s skull, from top to bottom (under the jaw to the top of the head) is 3-4 millimetres, much smaller than even a roo’s claw. They weigh as much as a teaspoon of sugar. The largest extinct marsupial, however, is the famous Diprotodon, a giant herbivore related to the wombat.

The record for the world’s strongest mammalian bite doesn’t go to a hippo nor a lion, but an extinct Australian marsupial: Thylacoleo carnifex, the marsupial lion. This record factors in body size (the marsupial lion was smaller than a placental lion); here’s more info. 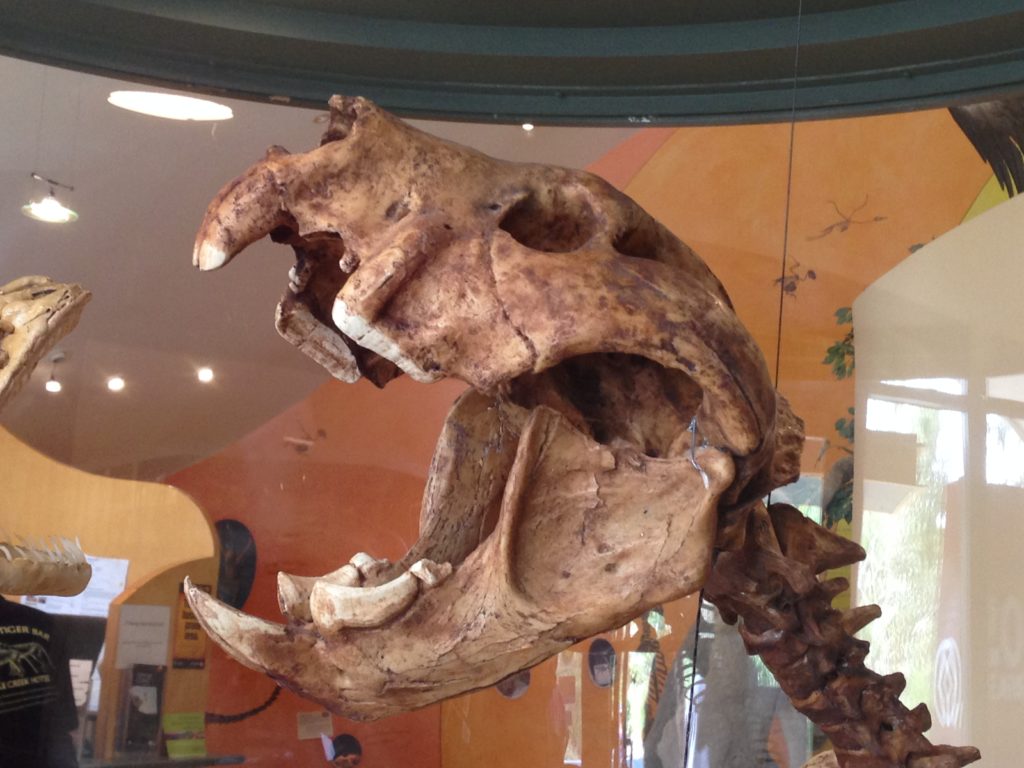 The horrifying skull of the marsupial lion, a carnivorous wombat that only went to extinct 30-40,000 years ago. It’s front teeth, initially evolved for pulling up grass roots, have been co-opted for gouging hunks from prey. Wikimedia Commons.

11. Australian marsupials can be divided up on what they eat

You can divide Australian marsupials into roughly three groups:
The other group is the marsupial moles, but I’ll leave them to you to Google.

12. Not all marsupials have pouches

Though the word ‘marsupial’ comes from the Latin word ‘marsupium’, which means pouch, not all marsupials have pouches. The pouch is present to protect the offspring while they suckle on the nipples, and as such, is even a fold in some species, like the pockets on a new jacket. The short-tailed opossum has no pouch or fold at all, but teats that can retract into the mother’s body. Amazingly, male water opossums have something all us men can be jealous of: “The male also has a pouch (although not as watertight as the female’s), where he places his genitalia before swimming”. 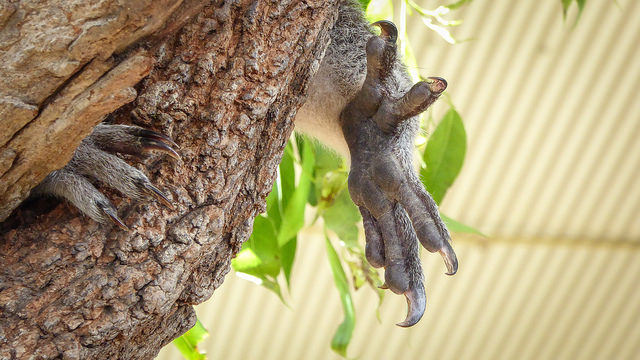 Note the fused toes on the left, used for grooming fur and as a seamstress’ unpicker for parasites. Flickr/Theen Moy/(CC BY-NC-SA 2.0).

Marsupials have an extra pubic bone, the epipubic bone, to support their pouch. Further, the toes of many marsupials appear conjoined with webbing, a mutation known as syndactyly.

A common trivia question is ‘What marsupial’s name is three letters repeated twice’. The answer is cuscus. No problem.