Air bubbles trapped deep under Antarctic ice are helping us understand the impact that increasing emissions might have on a naturally occurring ‘air purifier’. 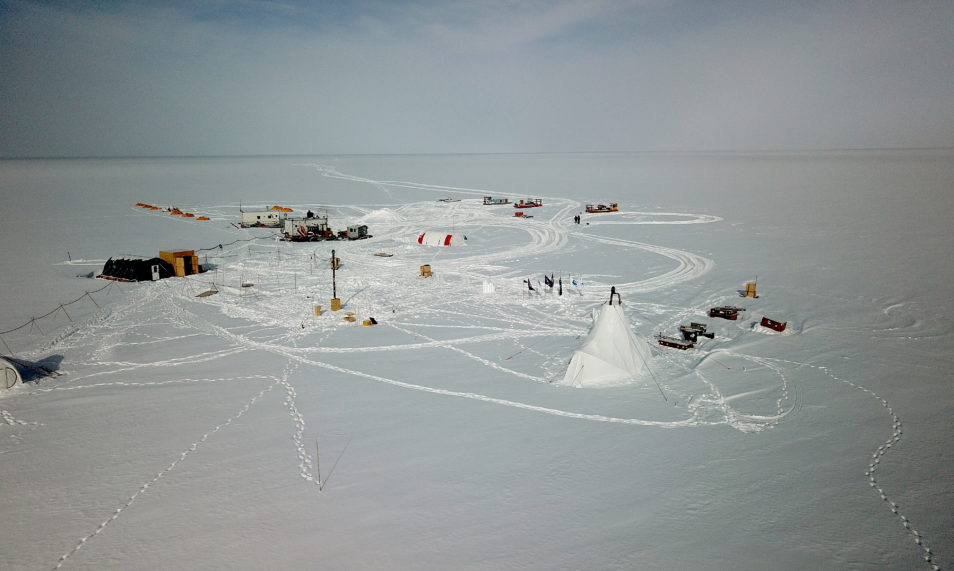 Three ice drills and a laboratory were set up in the camp at Law Dome. Photo Richard Smith.

An international team of specialised scientists and engineers are undertaking an exciting Antarctic project. On the team is one of our own climate scientists, Dr David Etheridge.

The team are researching the history of a compound called hydroxyl. This compound is a powerful oxidant and a natural ‘air purifier’ found in the atmosphere. It breaks down and cleans the air of greenhouse gases. For example, methane and industrial chemicals that deplete the ozone layer.

David who is co-Chief Investigator on the project said “We’re looking to understand how much of these pollutants have been removed naturally by hydroxyl. And whether the amount of hydroxyl in our atmosphere has changed since pre-industrial times, more than 140 years ago.

“This information is key to improving the accuracy of our climate models, enabling us to better predict the impact of pollutants in the future.”

It’s been six years of planning and three months working in one of the most remote and inhospitable places on Earth. Now, the team is one step closer to achieving what was once considered an impossible task.

The hunt for hydroxyl

Measuring hydroxyl on its own is no easy task. Hydroxyl radicals are so reactive that each molecule lasts less than a second before it reacts with a compound. This makes it impossible to sample directly.

And measuring hydroxyl in 140-year-old air is almost impossible. But there is a solution.

The researchers will instead measure the concentration of a tracer molecule, the carbon-14 isotope of monoxide (14CO). This acts as a measurable proxy for hydroxyl and also gives a meaningful average level for hydroxyl within the atmosphere.

“However, the 14CO tracer molecule isn’t easy to measure either. There’s only a very small amount of it in the Earth’s entire atmosphere – about 10 kilograms or less in total. So measuring 14CO is a bit like finding a particular grain of sand on an entire beach,” David said.

But the team aren’t looking for this tracer molecule in today’s atmosphere. To measure its impact on the atmosphere and changes in its concentration, they need to find 14CO in the air going back in time. In other words, they are looking for that grain of sand that existed centuries ago. And that’s where the fun really starts… 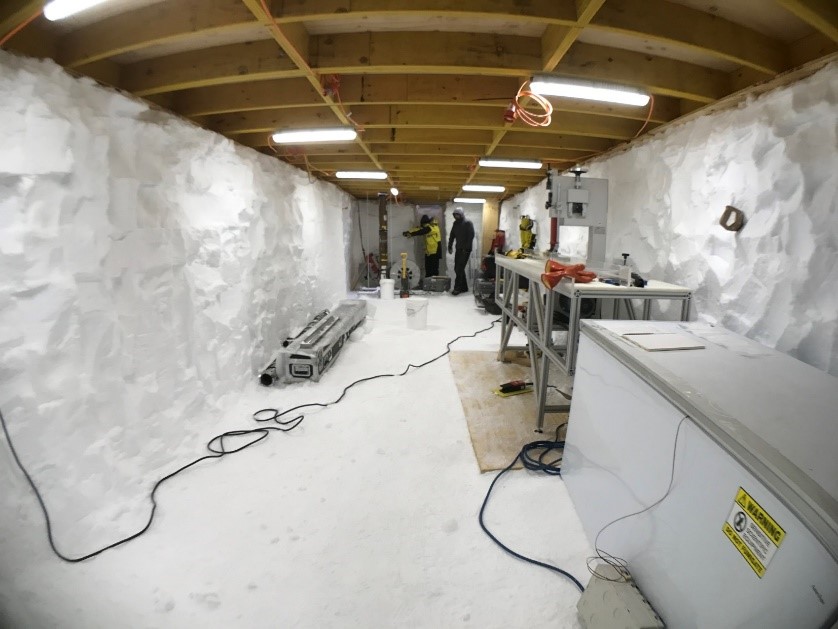 The team set up a make-shift lab in a trench dug into the snow. Credit: Sharon Labudda AAD

Something in the air (bubbles)

Antarctic ice may not be the first place you’d think to hunt for clues about atmospheric changes. But David and team know that the only place where we can look back to past atmospheres, before direct measurements began, is the air captured in ice.

The Australian Antarctic Program have long studied Law Dome in Antarctica, a site 130km from Australia’s Casey research station. It is a unique place, with very high snowfall. This rate of snowfall traps air and buries it at depth quickly where it is preserved in the ice for centuries. Because of this, it’s the only known place on the planet where we can search for past hydroxyl levels. 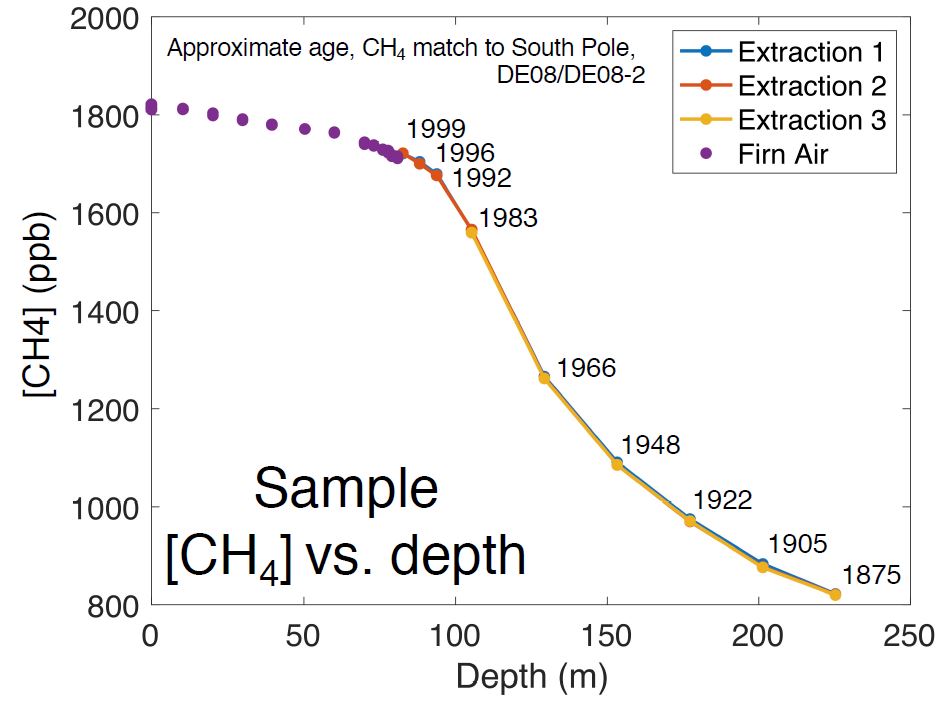 Preliminary results from the extracted air samples showing an increase in methane concentration over time. The air samples were dated by the researchers back to about 1875 AD.

The project scientists are drilling up to 240 metres deep into the ice and then melting the ice cores. Then they can extract bubbles of air trapped in the ice as far back as the late 1800s. This means we can sample the atmosphere from pre-industrial times, before increases in greenhouse gas emissions from human activity began.

One in a ten million trillion

So how did the team begin the process of measuring tiny concentrations of 14CO to measure hydroxyl?

The team extracted 0.5 tonnes of ice for each sample. To do this, they used three different ice drills from US Ice Drilling Program, including one installed in a specially prepared trench. They melted the ice at the site to extract the air bubbles containing the precious 14CO.

They had to conduct the process within 24 hours of the core being brought to the surface. This is because 14CO is not only rare, but also highly sensitive to cosmic rays. An advantage of Law Dome is that its high snowfall quickly accumulates and buries the ice to depths that shield it from cosmic radiation.

One half-tonne of melted ice resulted in 50 litres of air, in which the concentration of 14CO tracer molecules will be a few parts per 1019 molecules of air. Our scientist David Thornton had an extended stay at Law Dome. He was preparing the ice cores for melting extraction and sub-sampling them for other gases too. 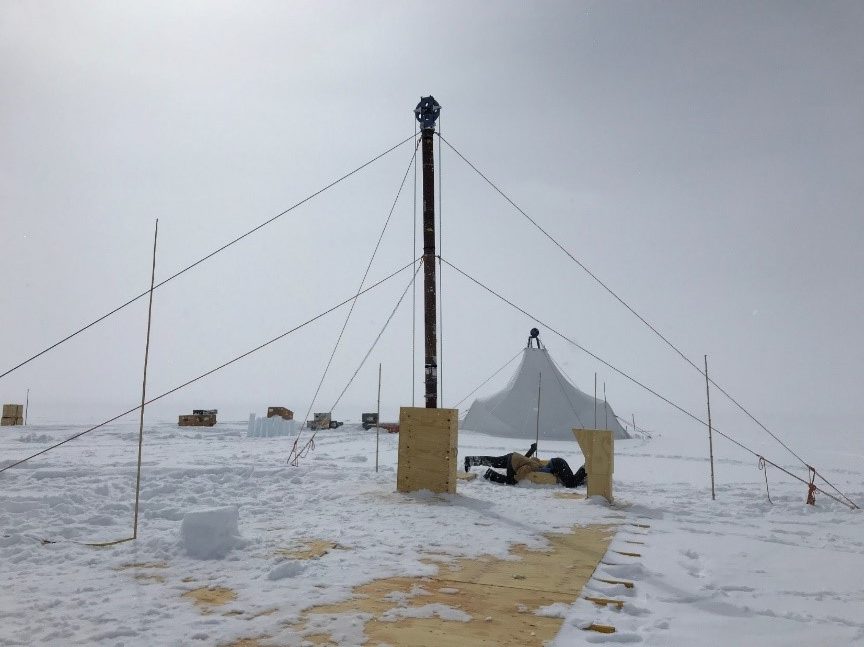 Outside the drilling trench (the trench is under the wood). Credit: Sharon Labudda AAD

Predicting the future from the past

Now the team has returned from their three-month expedition. And they can start to see what this ancient air can tell us. 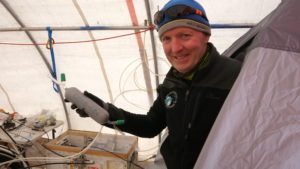 These precious air samples journeyed by ship to the University of Rochester in the United States. There the US team members extracted the CO from the air and converted it to CO2. The team transported the samples by sea as air transportation would increase their susceptibility to those cosmic rays we mentioned earlier, which could irreversibly alter them.

The samples recently returned to Australia in a small sealed glass capsule. A team at the Australian Nuclear Science and Technology Organisation (ANSTO) in Sydney turned the CO2 into about 10 micrograms of graphite.

From here, the team measured the 14CO. Calculations for several other influences on the 14CO measurements are now underway to reveal any historic changes in the concentration of hydroxyl in the atmosphere.

“It’s a huge achievement for the global consortium just to get this far,” David said.

“Even in summer, Law Dome is a very harsh environment in which to undertake such highly sensitive work. But the team did an amazing job, and from the preliminary analysis we’ve done, everything seems to have gone to plan.”

“It’s a huge success to now have all of the air samples collected, processed and analysed for the tiny amounts of 14CO. Now we’re of course very excited to see what the measurements hold.”

It may be a small and fleeting compound but if we know more about how hydroxyl removes pollutants from our atmosphere, we can improve the accuracy of our global climate models in terms of how they handle atmospheric chemistry. And from this, we can gain ice-borne insights into the future levels of greenhouse gases and ozone-depleting gases that affect our planet.

Our atmospheric research got you hot under the collar?

Previous post:
The pest is history! Put your knowledge to the test
Coming up next:
Science is in the genes, for our award-winning geneticist