In the Wiradjuri Dreaming, Biyaami (Baiame) is a prominent creator spirit. The stars that portray the Orion constellation also represent this spirit. Murriyang represents the ‘Skyworld’ where Biyaami lives.

This year’s NAIDOC Week theme is Always Was, Always Will Be. It recognises that Aboriginal and Torres Strait Islander people have occupied and cared for this continent for more than 65,000 years. It also recognises Aboriginal and Torres Strait Islander people were Australia’s first navigators, engineers, farmers, diplomats, botanists, artists, scientists and astronomers. 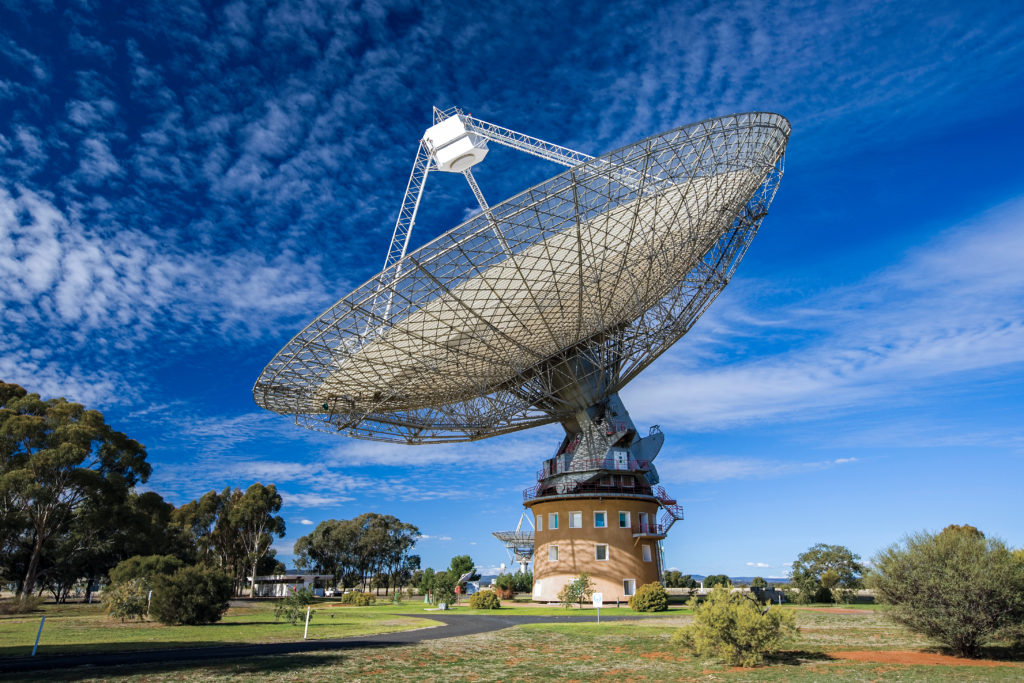 Our iconic 64-metre Parkes radio telescope has been given the Wiradjuri name Murriyang, which represents the ‘Skyworld’ where a prominent creator spirit of the Wiradjuri Dreaming, Biyaami (Baiame), lives. Image credit: D. McClenaghan/CSIRO.

Dr Stacy Mader, a Gidja man from Western Australia, is an astronomer and Senior Experimental Scientist at our Parkes Observatory. He was responsible for organising the traditional naming ceremony.

“The local Wajarri Yamaji people in Western Australia named all 36 of our Australian Square Kilometre Array Pathfinder (ASKAP) antennas, with a plaque placed on each antenna, and names built into the control software,” Stacy said.

“So when we got the same software for the 64-metre antenna at Parkes, the Aboriginal name was ‘not applicable’. I thought, we should probably fix that. And that’s how this process started.”

So, Stacy set off to find the Traditional Owners to name the antennas.

“The Wiradjuri nation is a large part of New South Wales, so finding the local Elders was a little tricky. There are no Traditional Owners who live in Parkes,” he said.

“Eventually, I was set on the right path by Trevor Leaman, a cultural astronomer in Orange. He is studying Wiradjuri astronomical traditions in the School of Humanities and Language at the University of New South Wales.

“But I was happy to spend the time looking because it’s very important to know you’re talking to the right people.”

Stacy then invited Wiradjuri Elders from the local region to the Parkes site to show them around the telescopes and the grounds. They got a feel for the area, wildlife and background of the telescopes. The Elders then came back to Stacy with their chosen names. 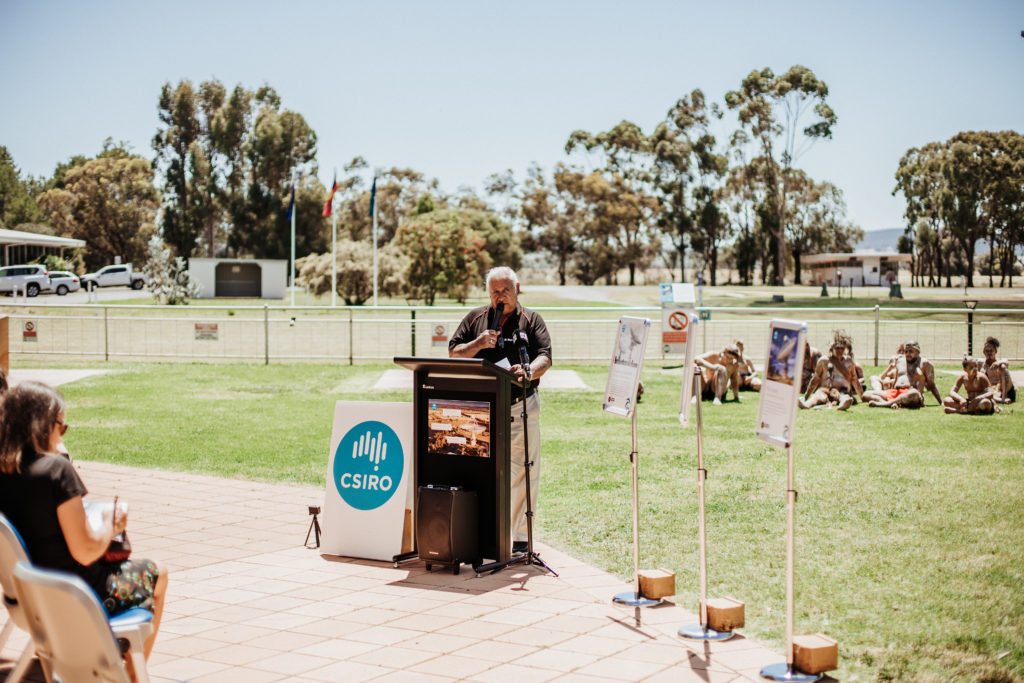 It wasn’t just the 64-metre telescope that received the honour. Two more telescopes on site also received Wiradjuri names. These telescopes also have historical and technological significance to the development of radio astronomy in Australia.

Means ‘smart dish’. This is now the name of a decommissioned 18-metre antenna. It was assembled at our Fleurs Radio Telescope Site, Penrith NSW, in 1960, and moved to Parkes in 1963. It started operating in 1965. The antenna, when linked to the 64-meter antenna, was pivotal in early work to determine the size and brightness of radio sources in the sky. And having the ability to move the antenna along a railway to observe was a smart way of doing things.

Means ‘smart eye’. This is now the name of the local 12-metre antenna. Commissioned in 2008, the telescope was a test bed for technology now used on the 36 antennas of ASKAP. These antennas use a special type of receiver. A phased array feed that is capable of looking at different parts of the sky at once. This ‘faceted eye’ is certainly a smart one. 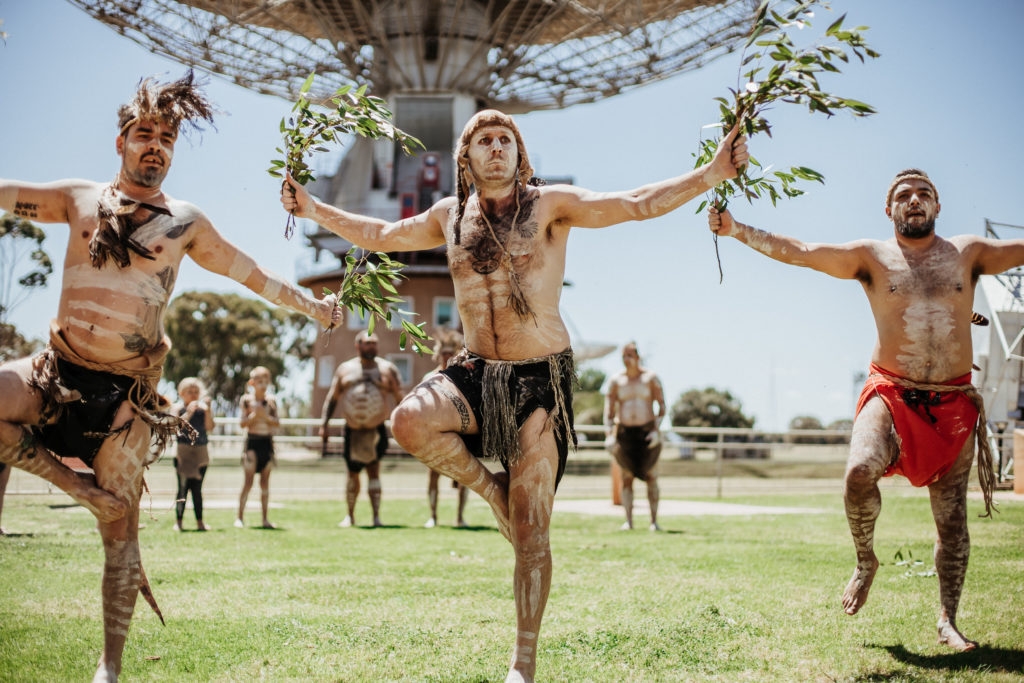 We have a Reconciliation Action Plan. This plan confirms our commitment to reconciliation with Aboriginal and Torres Strait Islander peoples, the oldest living culture in the world. Firstly, it recognises Aboriginal and Torres Strait Islander peoples as the first people of Australia. Secondly, it respects their enduring connection to lands, skies, waters, plants and animals.

By giving the telescopes their traditional names, we acknowledge the astronomical knowledge of Aboriginal and Torres Strait Islander peoples and the Wiradjuri language.

Hear Wiradjuri Elder, Dr Stan Grant AM, pronounce the names of the telescopes.

Find out more about our Parkes radio telescope

Previous post:
The lithium-ion waste problem hiding in your pocket
Coming up next:
Our top six COVID-19 research highlights of 2020