March flies prowl Australia’s beaches looking for blood – but why?

March flies prowl Australia’s beaches looking for blood – but why?

The painful bites of female march flies can ruin your day at the beach. When we’re not there, they bite wallabies, birds, and even reptiles.

While relaxing at the coast this summer, you might have noticed a few fellow beach goers failing to socially distance. You might even have had the unpleasant experience of one biting you and drawing blood.

Australia’s large buzzing flies – commonly called march flies – are very quick to home in on napping sunbathers, looking for a meal of blood. But what are they actually doing on our beaches, given we’re seemingly the only large animals there?

The answer: breeding. Female march flies use your blood to boost their egg production. Then they lay eggs in the sand. After hatching, the hungry maggots wait for prey under your feet.

In large enough numbers, these flies can make beachgoing downright unpleasant. But there are ways to protect yourself. Wearing vertical stripes confuses them, and thicker clothes are harder to bite through. Put a towel over your body while you nap.

The largest of all bloodsucking insect families

The flies ruining your beach outing are mostly members of the family Tabanidae, the horse, deer, and march flies. Globally, there are around 4,600 species of these fast, alert flies. That makes tabanid flies the lineage with the most species of all bloodsucking insects, more diverse than mosquitoes, fleas, or lice. About 500 species are endemic to Australia, with dozens of species left to describe. They are diverse and plentiful, ranging from our highest mainland peak, Mount Kosciuszko, down to sea level.

Tabanid flies have streamlined bodies with eyes taking up most of their heads. Individual parts of their eyes can be sized or coloured differently to filter light, giving them clearer focus on contrast and shadow. Their antennae are strong and sensitive. These flies can detect everything from the carbon dioxide we exhale to octenol, a key component of our sweat and breath, as well urine.

Why are they on my beach?

You might look up and down a salty, windswept beach and wonder where these flies are coming from. And what do they feed on after school holidays are over?

Well, beaches are just one of the micro-habitats where land meets sea. Many invertebrates take advantage of these areas due to the mix of resources. While they might look desolate, beaches are important for many bird and marsupial species. Some wallaby species only live on coastal habitats.

So while you might not see other possible meals for march flies, they sure do. Adept and manoeuvrable in flight, march flies travel kilometres in search of blood meals. They are not picky and most will bite any vertebrate they can find.

It’s only the female march flies who are out for your blood. Both females and males also rely on nectar, visiting the flowering plants in beach dune systems.

Not all march fly species need blood. While protein in blood boosts egg production, some species can produce a smaller clutch of eggs using only nectar and larval resources. One beach dune subfamily, Scepsidinae, has no functional mouthparts as adults. The food they eat during their rich larval stage is ample. 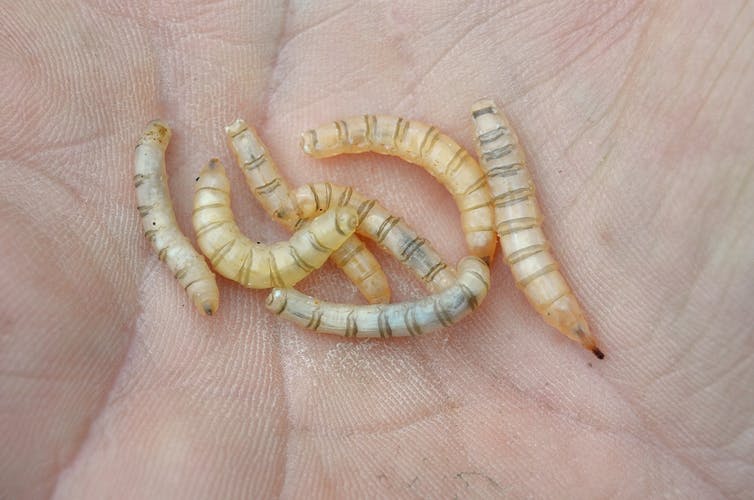 March flies spend most of their lives as legless predatory maggots hiding underground. Covered in warty armour and fleshy tubercles, these maggots are voracious predators of soil fauna. To subdue their prey, they have long fangs with venom canals.

If that description makes you think of Dune’s giant sandworms, you’re not far off. Tabanid maggots have been seen pulling down toads as they rest on the surface.

While adults have broad tastes, the larvae are specialised predators operating in specific micro-habitats. In fact, larval adaptation to soil type and humidity has likely contributed to the species richness of Tabanidae. Within each small niche, the maggots are fearsome.

Take mangroves, which are nearly as rich in fly species as rainforests. The roots of sand dune plants also host insect, crustacean and worms, which the maggots prey on. Nowhere in these coastal systems is safe from them. They can find prey in the muddy divots among dunes and even go down to the waves’ edge.

Many flies have adapted to be able to eat seaweed and marine life washing in on the tide. But as these different fly species land, march fly maggots may well be there waiting beneath the sand for the first brave arrivals. It is likely many more species of larvae are growing under our feet, as yet unknown to science. The first we know of the great drama below ground is when the maggots pupate into hungry and clever adults. 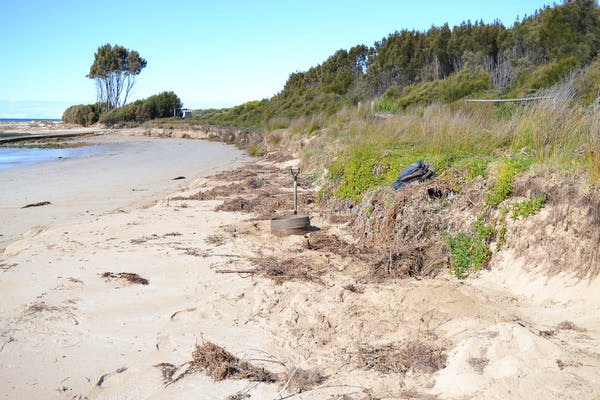 How can we avoid them?

Most people would like to avoid being feasted on by adult march flies while on the beach. There’s no simple fix, alas. These flies can easily see polarised light and dark colours contrasting with sand and vegetation. Their painful bites can penetrate light fabrics.

Heavier fabrics, including rashies and stinger suits, can provide some protection. And if that fails, try wearing stripes. Recent studies suggest march flies are baffled by vertical stripes, which is one reason zebras are coloured as they are.

Insect repellents with DEET can provide some reprieve, though the flies are so fast they can zoom in for a nip before being repelled. So what can we do? Luckily, the flies tend to settle for a moment before biting. That’s your best opportunity to shoo them away.

March flies are worst in the warmer months, particularly on clear, sunny days without wind. In humid regions, they can stay active over winter too. Thankfully, tabanid flies are not involved in human disease transmission in Australia, though their bites can cause allergic reactions and they can carry pathogens to kangaroos and wallabies.

You’ll notice that some beaches are plagued by march flies and others have barely any. In our years of researching flies, we’ve found march flies and other tabanid flies to be at their most annoying on remote beaches with natural bushland. Take a moment to appreciate their aerodynamic adaptations before moving to another beach.

Read more about our fly research