In the wetlands of Kakadu, rangers are using Artificial Intelligence (AI) and Indigenous Knowledge to care for country. The results are promising: thousands of magpie geese are returning to roost. 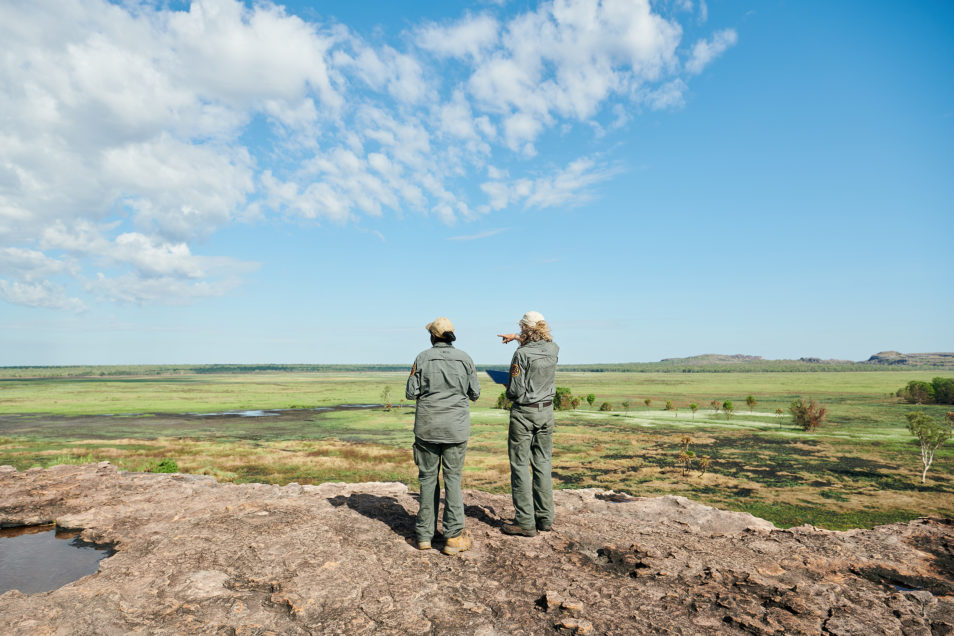 The iconic view from Ubirr, in Kakadu National Park in the Northern Territory. Image: Microsoft.

Have you seen the view from Ubirr, in the heart of Kakadu National Park?

If you look closely, out on the wetlands, woodlands and dark ribbons of rainforest, you might see a flock of large black and white birds.

Against the odds, thousands of these magpie geese are returning to Bininj country, to the once weed-choked wetlands. And local Bininj Traditional Owners and Kakadu National Park Rangers are working with scientists to bring them back.

Now we’re growing the success of this work through a project that uses artificial intelligence (AI) and Indigenous Knowledge to adaptively track and manage this country.

Wetlands are ‘the supermarkets of the bush’

This wetland in Kakadu National Park is a special place. Bininj have hunted, fished and lived on this land for about 65,000 years.

The park’s wetlands are internationally-recognised for their biodiversity and cultural values: they’re a living cultural landscape. The Nardab wetlands near Ubirr are home to magpie geese (Anseranas semipalmata), which are a key indicator of ‘healthy country’, and an important food source for Bininj. Wetlands like these are bush supermarkets that provide food like fish, magpie geese and freshwater turtles.

But, a weed called para grass (Urochloa mutica) is choking these floodplains. On the Nardab floodplain where thousands of magpie geese once flocked, researchers counted just 50 birds in 2018. 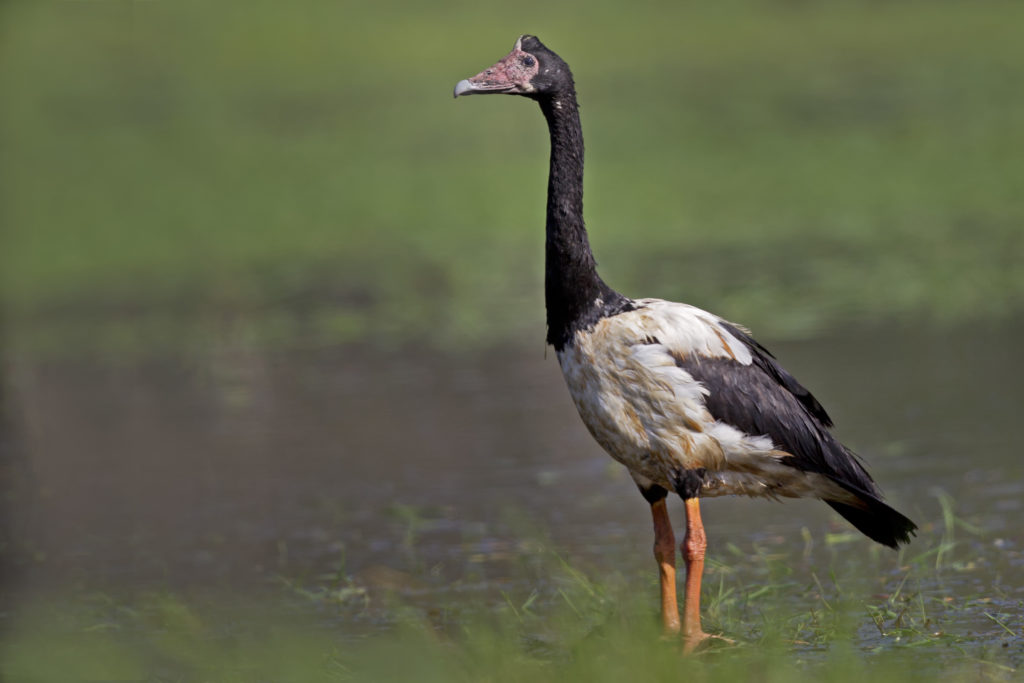 If you’re a magpie goose, para grass is bad news.

When magpie geese breed, they create a floating platform of reeds. When their eggs hatch, the three parents — that’s right, they often breed in trios! — use their feet to bend over tall grasses, so the chicks can eat the grass seeds. Adorable and ingenious.

The adults are ‘specialised feeders’ — in human terms, they’re picky eaters. They eat wild rice, spike rush and two other aquatic plants. But when para grass takes over a wetland, it overpowers these plants. Then the geese and their chicks have no food. What’s more, dense stands of para grass make it hard for the father goose to create the nest; there’s no space to build.

In short, when para grass takes over, magpie geese leave. It’s a real issue given that many of the wetlands in their southern range have been drained for farmland. 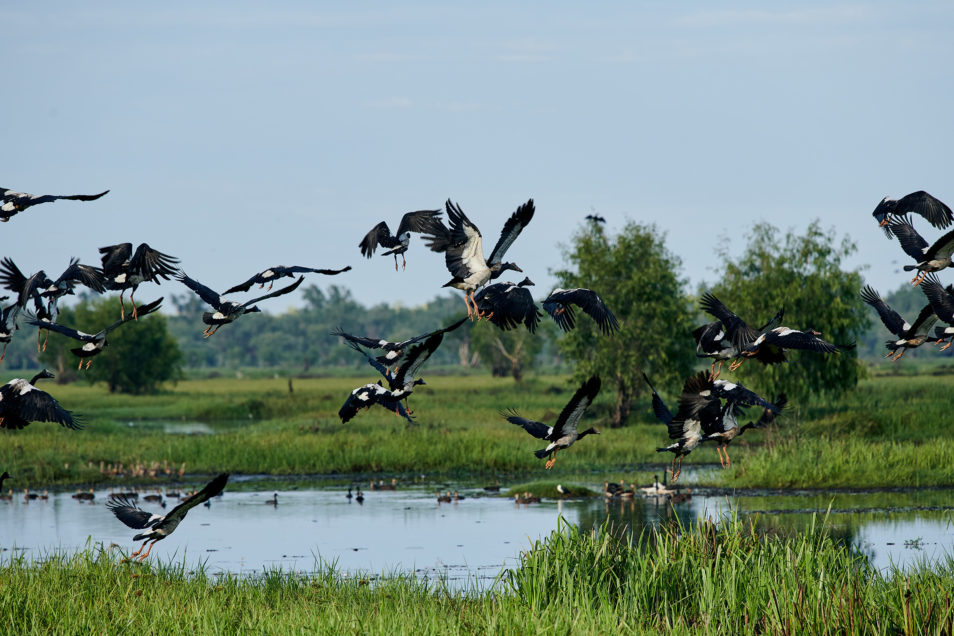 A flock of magpie geese - large black and white birds - flying across a wetland full of water.

Magpie geese are an important indicator of wetland health, in Kakadu. Image: Microsoft.

Para grass can be head high and dense. This makes it almost impossible for Traditional Owners to access the wetlands and the food they provide. It’s not only annoying, it’s dangerous: when para grass takes over, you can’t see where crocodiles are lurking!

So, the rangers and Traditional Owners have been working hard to control para grass. But the wetlands of Kakadu National Park cover huge areas.

“The Kakadu rangers have two million hectares to manage in one of the most remote places in the world. They’ve got their hands full,” Justin Perry, our research scientist said. That’s an area one-third of the size of Tasmania!

With such big infestations, rangers are also unsure of the best way to control the para grass. What combination of burning or spraying works best, and at what time of the year? 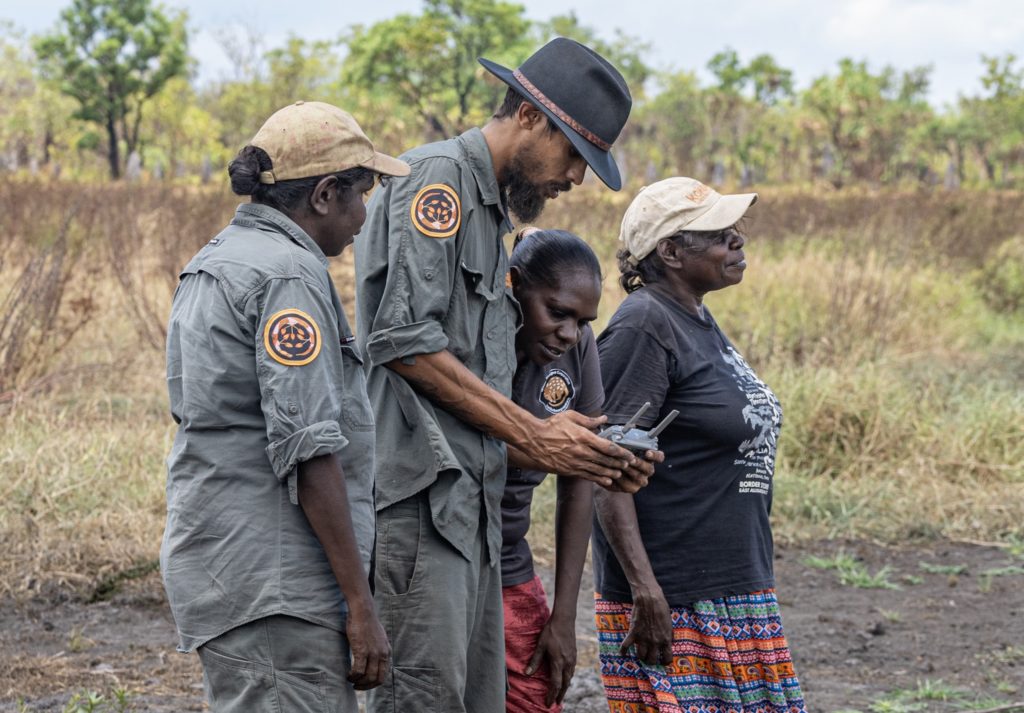 It’s morning in Kakadu and one of the rangers, Kadeem May (Cultural Heritage Officer), is guiding a drone. The drone flies 60 metres above the wetlands, along a carefully planned route, capturing thousands of photos along the way.

Collecting and analysing information about magpie geese and para grass using drones is a game-changer for this work.

“Traditionally, rangers would laboriously mark where they’d sprayed. It was expensive, it took a long time, and in 40°C heat with 60 per cent humidity, it was tough work. Old ways of monitoring never involved any immediate feedback on how effective that spraying or that controlled burn was: what had died, what had come back. The drone optimises all the rangers’ hard work,” Justin explained.

All the drone monitoring, data analysis and reporting happens through the new Healthy Country Dashboard, we developed with the Kakadu Rangers and Microsoft.

Once the ranger upload the images, the Microsoft AI within the Healthy Country Dashboard can identify magpie geese in each photo, giving a more accurate estimate of the bird population. The software also differentiates para grass from native plants. Therefore, rangers can check how effective their weed management work is.

“The dashboard is really visual and interactive, which is empowering for everyone involved. It’s much easier for the rangers to communicate what they’re doing with their community,” Justin said.

You can find out more about the technology behind the Health Country Dashboard, and the expertise Microsoft provided in their article. 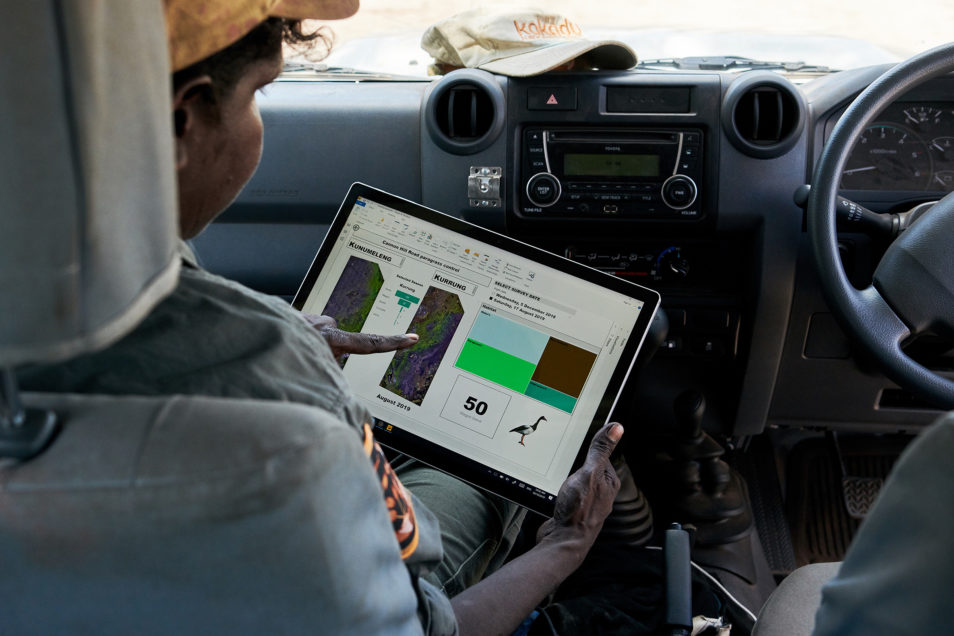 A female ranger, in a car, using the dashboard to look at magpie geese numbers.

The Healthy Country Dashboard can identify magpie geese in each photo, giving an accurate estimate of the bird population. Image: Microsoft

Adaptive management means recording and learning from the work you do, to improve what you do next time.

“It’s the only project I know of that closes the adaptive management feedback loop in a time scale that makes sense for rangers and people working on the ground. Rangers need timely information: Did our work (spraying or burning) three weeks ago have a positive impact? If not, what should we do next?” Justin explained.

Most importantly, it’s driven by ethical AI and responsible innovation. The technology and the method has been Indigenous-led from the beginning from the designed to the science carried out. Our scientists were also determined to make sure the design was user-friendly. You don’t need to be a computer programmer to use it, rangers can use the dashboard off the shelf.

“We know it’s working because when we walk away, the rangers are still using the information collected from drones and on-ground monitoring to manage these wetlands,” our research scientist Cathy Robinson said. 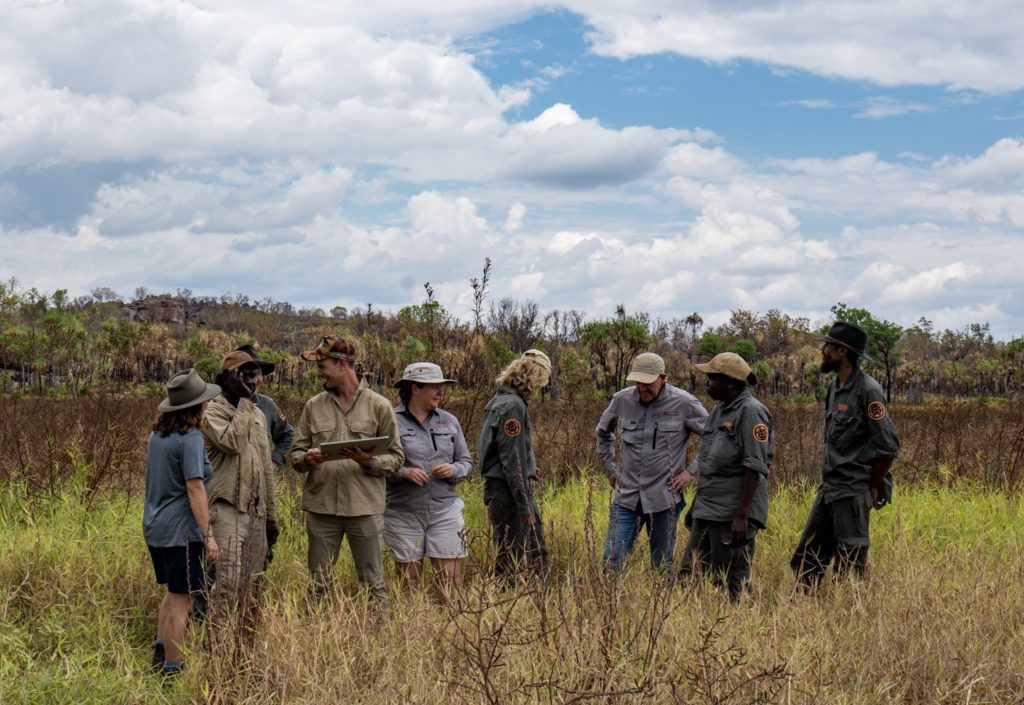 Kakadu Rangers and our scientists and the National Environmental Science Program gather in a wetland in Kakadu. Image: Michael Douglas.

The wetlands are flourishing

With Bininj knowledge working side-by-side with AI, there are already reports of results on the ground — the wetlands are flourishing.

“Before we started this project we saw a field of para grass. Where the weed had invaded and choked up the wetland, it almost felt overwhelming,” said Professor Michael Douglas, a team member, Kakadu National Park Board Member, researcher at the University of Western Australia, and Director of the Northern Australia Environmental Resources Portal.

“But from little things, big things grow. The rangers did small, agile experiments on the areas that were culturally and environmentally important. Now, people coming back on the floodplains are saying ‘our supermarket is open’. The ladies are collecting turtles, and we’re seeing thousands of magpie geese come home to roost.”

The team hopes these successes will encourage other Indigenous groups to use ethical AI to look after country. With 80 per cent of the world’s remaining biodiversity safeguarded by Indigenous communities, these kinds of partnerships hold great potential.

“We’ve set it up so other groups around the world can use it to help solve their particular environmental challenges. In fact, the more people that contribute, the better the model gets. We want it to be universal,” Justin said. 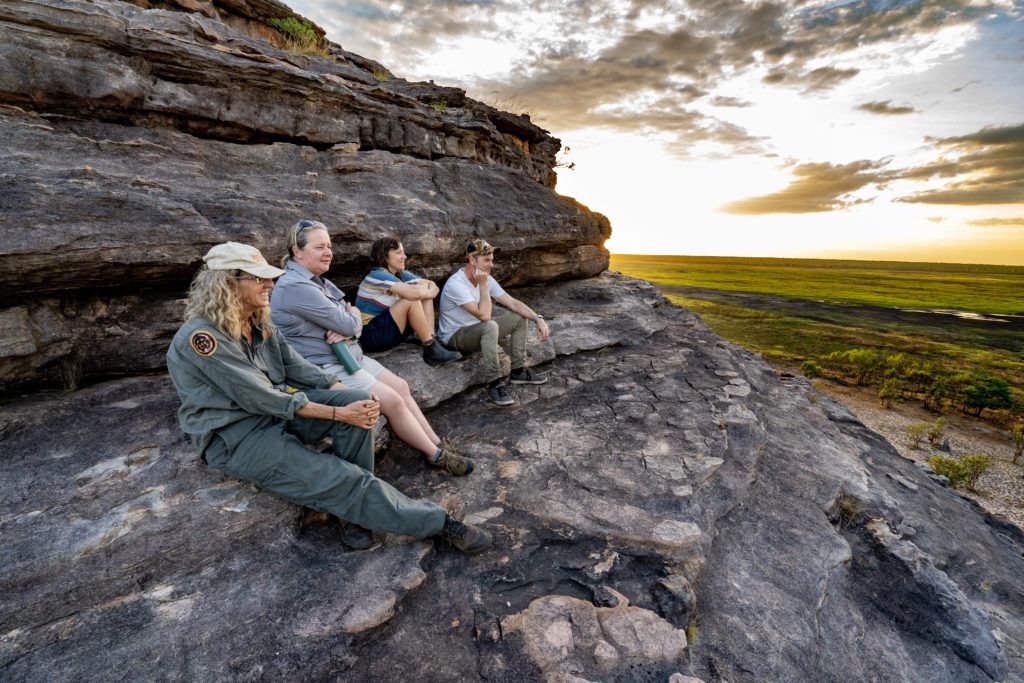 Previous post:
Nitrogen fertilisers are incredibly efficient, but they make climate change a lot worse
Coming up next:
Good books: Give the gift of science this year