How to stay cool, Aussie-animal style

How to stay cool, Aussie-animal style

From brain-sucking to spit-bathing, Australian animals have evolved some weird and wonderful ways to survive heat stress and drought. Here are six animals that keep their cool.

How do you beat the heat? Do you fan your face? Hop in the pool? Linger in the frozen vege aisle?

Australian animals have evolved some weird and wonderful ways to survive heat stress and times of drought. From brain-sucking to spit-bathing, here are six animals that keep their cool. 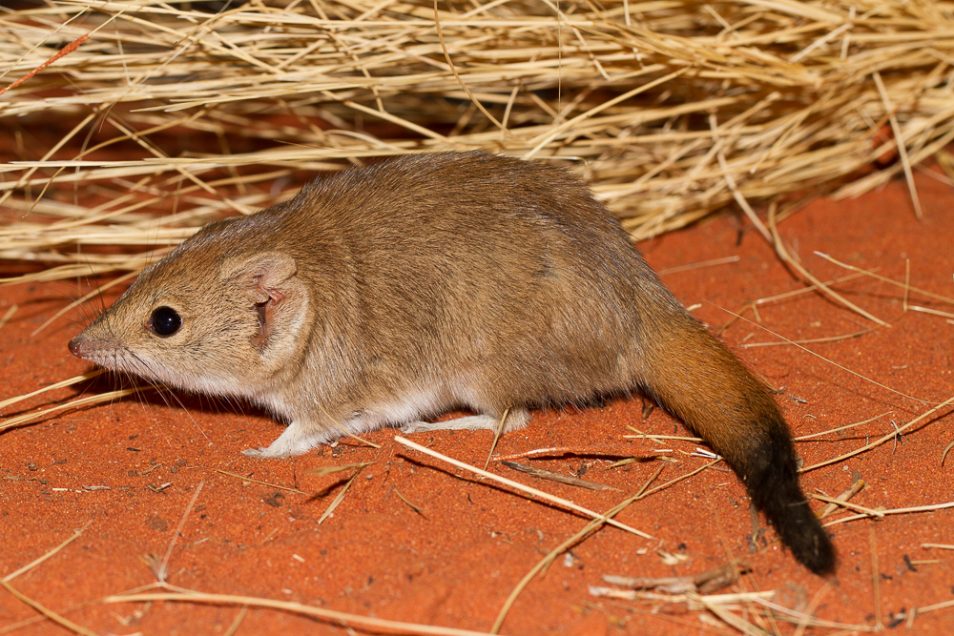 Awww. Looks cute, doesn’t it? It sucks the brains from its prey.

The mulgara lives in central Australia, where seasons cycle from ‘boom to bust’ and back again. In the good times, mulgaras store excess fat in their chubby little tails. When food is scarce, they draw on the fat from their swollen tails to survive. Best of all, this carnivorous marsupial doesn’t need to drink water. It’s a fierce predator that meets all of its water requirements from eating juicy mammals, reptiles, centipedes, spiders and insects. The delightfully deceptive mulgara. 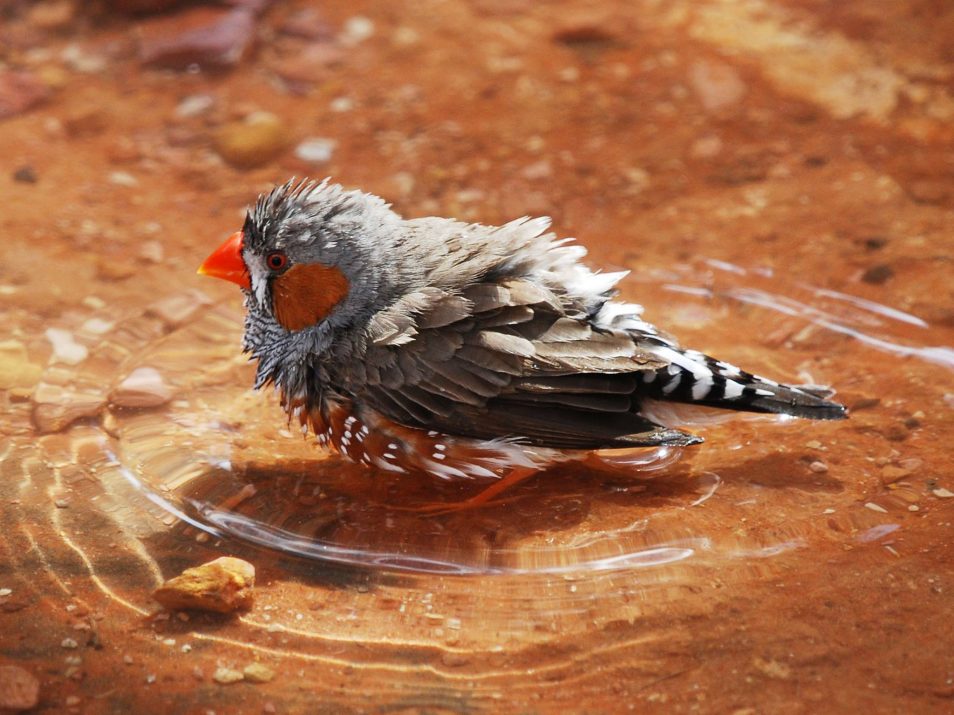 Zebra finches can ‘drink’ their own fat, allowing them to survive in the driest parts of Australia. Photo: Hélène Aubault via Bush Heritage.

Zebra finches can ‘drink’ water from their own fat. Huh?

During a drought, zebra finches quench their thirst by breaking down the fat in their own bodies. Most birds can break down muscle or other proteins to get water, but they also need these proteins to fly and to keep their little hearts a-tickin’. So if a heat-stressed bird converts too much protein it can do them more harm than good.

Researchers from Jagiellonian University in Poland discovered that, during a simulated ‘drought day’ a typical zebra finch—which weighs a tiny average of 13.5 grams—produced about 0.44 gram of water by breaking down body fat. Freeing up this much water using only protein would require one-third of the zebra finch’s flight muscles, or an amount three times the mass of their hearts. Clever, fat-busting finches. 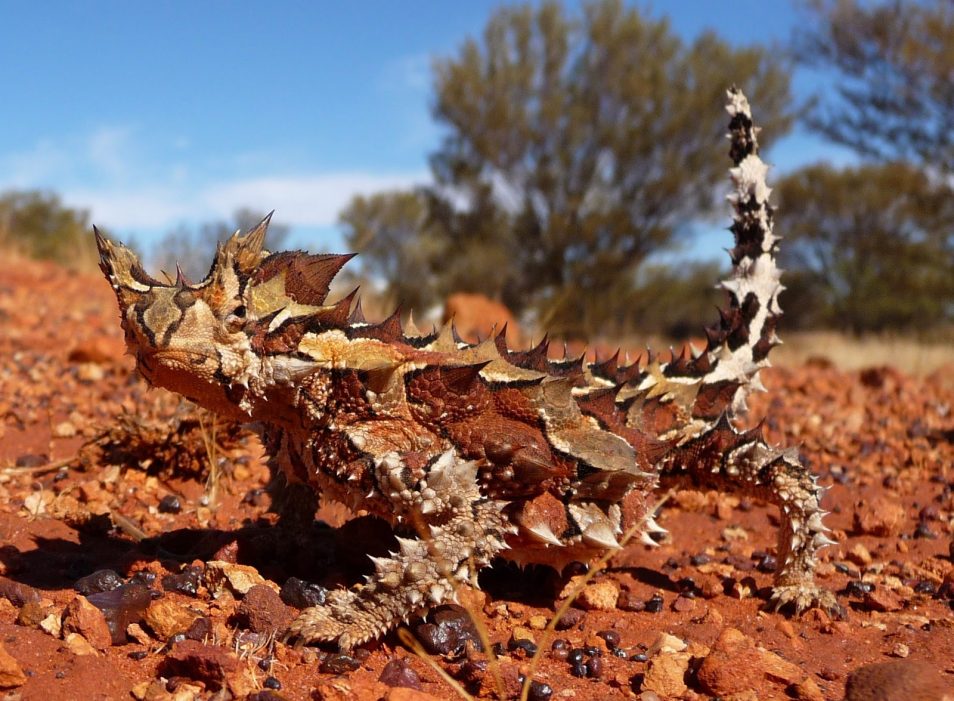 A thorny devil can drink with its skin, channelling dew and rain to its body via capillary action. Photo: Christopher Watson.

The thorny devil can drink with its skin. Sorry, what?

This ant-eating lizard lives in arid Australia, where pooled water is a rare. But, during the night, dew condenses on its spiky body, and in the morning it brushes up against dew-covered grass. Then, the devilish magic happens! Its scales are arranged so that dew channels down to the corners of its mouth. The grooves between its scales are hygroscopic (moisture-attracting), so it absorbs water like blotted paper, moving moisture to its mouth via capillary action. Genius! The same process occurs if it rains. But if it’s extremely dry, they can bury themselves in sand, and draw moisture from it. What a crafty devil. 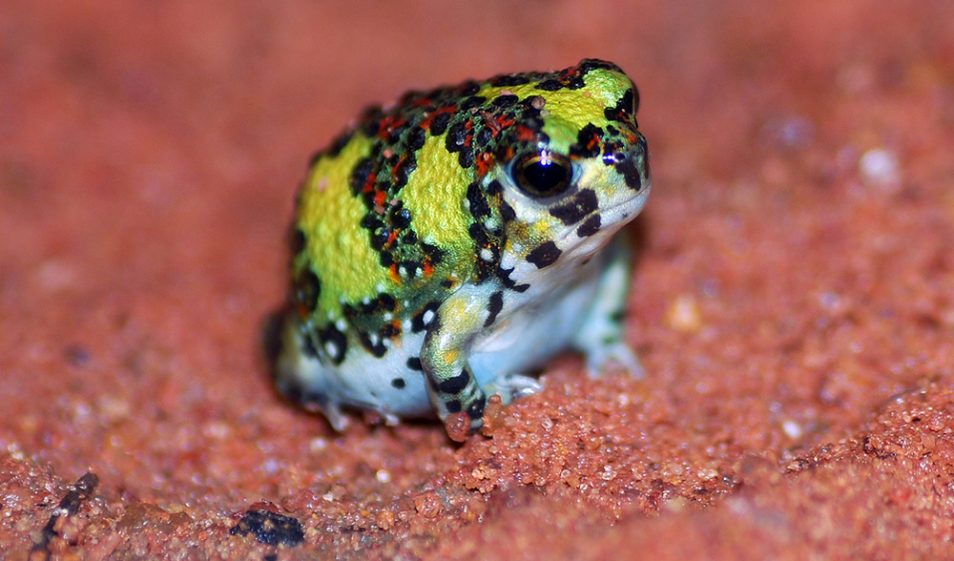 The crucifix frog is a small amphibian with a big appetite … for its own mucus cocoon. (Photo: © Dr Paul Anthony Stewart, Sydney University; Flickr username Paulhypnos.)

Feeling a little parched? Why not wrap yourself in a mucus cocoon and bury yourself underground ’til it rains again?

The crucifix frog—or holy cross frog—has life in arid Australia sorted. It spends most of its life underground, enveloped in a home-made, protective mucus cocoon. It can stay like this for years on end, dormant, patiently waiting for rain. And when rain eventually does trickle down, it eats its own cocoon for a nutritious kick start—delicious!—and starts digging skywards. 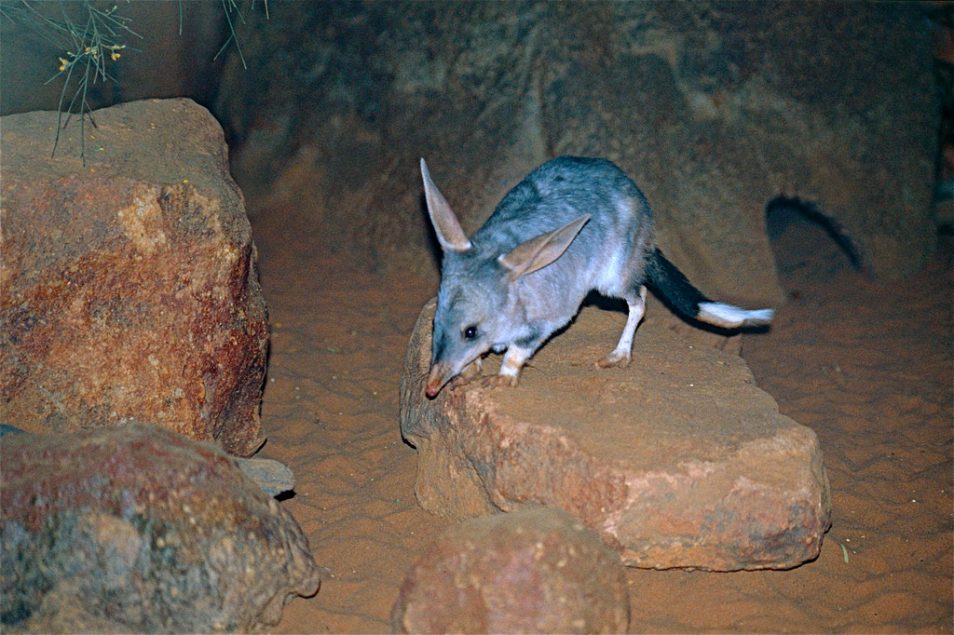 Ol’ radiator ears. The bilby uses the big surface area of its ears to keep its cool in the heat of arid Australia. Photo: Bernard Dupont via Flickr.

My, what big ears you have! All the better to stay cool.

Bilbies have big ears, it’s plain to see. This desert-dwelling marsupial uses their ears like a radiator. Their ears have such a large surface area, and are so loaded with blood vessels, that the blood that flows through them returns to their bodies cooler than before. This lowers the bilbies overall body temperature. 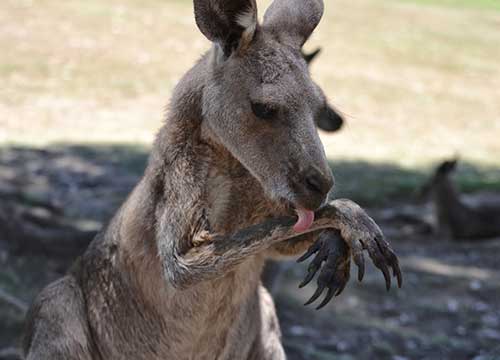 Kangaroos give themselves a good spit lick to cool down. And why not?

When it comes to amazing adaptations, kangaroos punch above their weight.

So there you are. The next time you’re feeling hot and sweaty, why not dig a large hole and sit in it? Or give your mate a spit bath? Don’t thank us. Thank your favourite arid Australian animals.

Want to know more about Australia's bizarre animals and plants? Visit the Atlas of Living Australia

Previous post:
Tackling drought with data visualisation
Coming up next:
The wound that won’t heal: solving the puzzle of Buruli ulcer