Fishing for answers to the AFL’s tanking issue

Fishing for answers to the AFL’s tanking issue

We're using the modelling techniques, normally reserved for fisheries, to understand the dynamics of sporting leagues like the AFL.

The hallowed MCG at night, where teams compete for premiership glory. Image: Flickr via Sufw

The first round of the Australian Football League season always brings with it a sense of unpredictability and a few surprises. Your most optimistic hopes can rapidly give way to despair, as your team plummets towards the wrong end of the table. Sometimes it’s impossible to predict.

Maybe its injuries, the umpires or maybe your young core just isn’t stepping up as you would hope. Whatever the case your preseason predictions are looking hopeless, and your fantasy football team looks even worse.

But if you think managing your SuperCoach team is rough, spare a thought for the professional sports managers, trying to get the right mix of youth and experience at their clubs. You might even feel for the AFL itself, as the administrators try to manage the strength of its 18 teams and make sure the league is competitive.

This is no simple task. But what if there was a way to accurately predict the team or leagues response to various strategies before they are implemented? We have developed many sophisticated simulation models for a wide range of situations: from energy efficiency to responses to flood events, and now we have a model that can help answer AFL’s big questions thanks to Tuck and Whitten.

We’re not talking about AFL legends, Michael Tuck and Ted Whitten. We’re talking about our own Dr Geoff Tuck and colleague Dr Athol Whitten, who use computer simulations of fisheries such as blue grenadier to inform stock management systems. And now, they have applied these modelling skills to understand the dynamics of sporting leagues.

Turning our knowledge of stock management in fisheries into insights for the AFL. Pictured here – Macruronus novaezelandiae (blue grenadier)

Footballers are like fish. We’re not talking about the obvious examples of Paul Salmon, Cameron Ling, or Anthony ‘couta’ Koutoufides here either.

Sporting leagues and fisheries are both complex dynamic systems. Players are recruited, grow in ability and retire – just like fish (although this retirement often involves tartare sauce). Both systems have mechanisms in place to manage stock performance. When a fishery has low stock, catch quotas are limited. When an AFL team is under-performing, they get an injection of talent through the AFL draft, which is designed to balance the scales.

This brings us to an issue that has all fish concerned: tanking.

Tanking is the practice of deliberately weakening team performance to finish lower on the ladder in order to gain an advantage through the draft. When a team’s results start looking a bit fishy, you know fans will be angling for answers and a way to stop this practice.

By applying our fisheries management modelling Tuck and Whitten tested sporting leagues with various draft systems, comparing incentives to tank and measures of competitive balance. They considered various draft systems and the basic reverse-order draft, used by the AFL, was shown to create the greatest incentive for teams to tank. Not that we’re letting the teams in question off the hook. 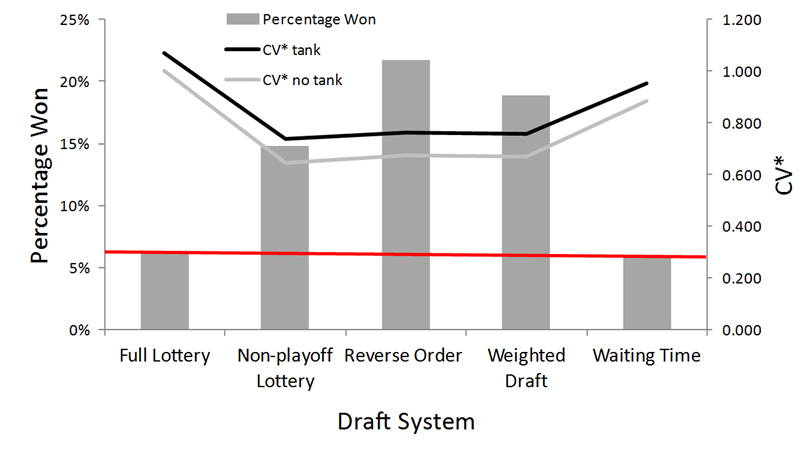 This graph shows how the reverse-order draft is throwing up some fishy statistics. CV represents league evenness.

Previous post:
New weapon against deadly Hendra virus
Coming up next:
A sneak peek at the first science from ASKAP