Climate experts say we should strap ourselves in for La Niña! But what exactly is this climate phenomenon, forming part of the El Niño–Southern Oscillation cycle? 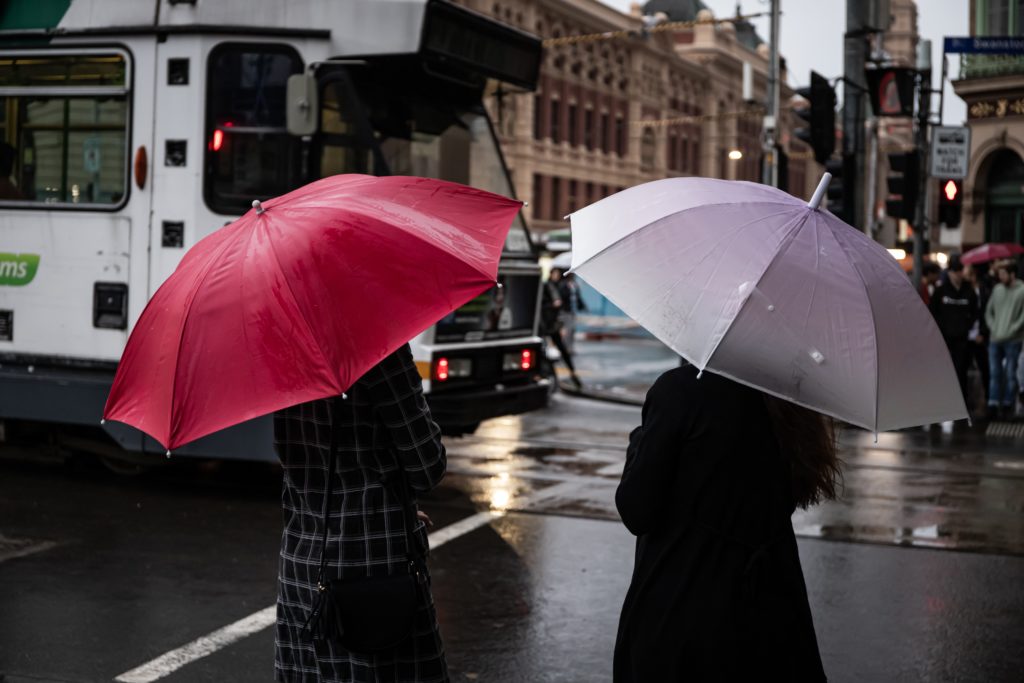 The La Niña phase of the El Niño-Southern Oscillation usually means more rain is on the way. But there are some caveats.

Forecasts from the Bureau of Meteorology have confirmed La Niña is returning for the third year in a row.

But what exactly is a La Niña event? And how does it differ to El Niño? How do these big climate giants influence our day-to-day weather? And is climate change having an impact on these naturally occurring events?

If you tuned out in high school or need a quick refresher, we’re here to help with five things you need to know.

Both El Niño and La Niña are known as climate phenomena. The oceans switch between these states roughly every two to seven years, depending on the wind and ocean conditions across the Pacific Ocean between Australia and South America. El Niño is known as the warm phase and La Niña the cold phase, but it’s also possible to be in a neutral ENSO phase, i.e neither.

They’re kind of a big deal. They play a major role in our day-to-day weather, influence our seasons and year-to-year climate. But it’s important to remember there are other factors that influence our climate as well. 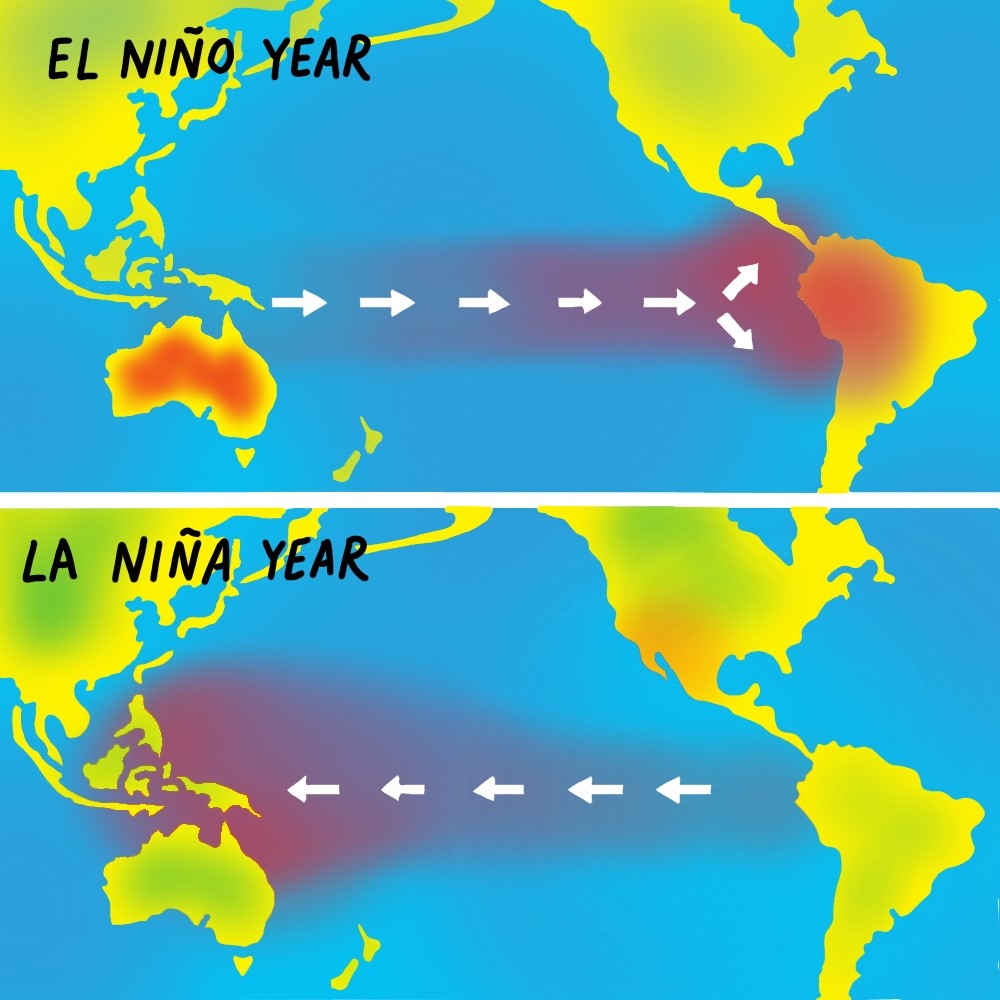 In El Niño years (top), trade winds weaken from the east (the Americas) to west (Australia) which means warm waters which begin to gather in the Americas don’t make it to Australia. Cooler than usual ocean waters result in less rainfall for Australia. In La Niña years (bottom), stronger trade winds blow from west to east across the Pacific ocean, bringing warmer than usual waters with them. An increase humidity and rainfall usually follows. Illustration: Leigh Rigozzi

… but for certain parts of Australia only. La Niña typically means higher rainfall for central, eastern and northern regions of Australia.

La Niña is also linked to warmer than usual ocean waters around Australia (toward Indonesia). This can mean increased likelihood of floods (which could be a real challenge for areas that have recently been in drought) and tropical cyclones.

However, a La Niña forecast doesn’t always mean more rain is on the way. It’s confusing, we know! The extent of rainfall really depends on the strength of the La Niña event.

Both La Niña and El Niño events are modulated by the strength of another climate giant – the Indian Ocean Dipole. For us to receive heavy and prolonged rainfall, particularly in south eastern Australia, we’d need a negative Indian Ocean Dipole to also occur.

Like we mentioned, there are lots of factors at work that influence Australia’s climate. These include East Coast Lows, the Madden-Julian Oscillation, and Southern Annular Mode. These factors dictate what is called Australia’s ‘natural variability’.

It’s possible for scientists to monitor ENSO over a long period of time (as in decades). But it requires complex earth system models, including some of our own at CSIRO, which run on supercomputers. To project future states of ENSO, scientists run these models many times – involving many terabytes of data crunching – to make sure they can get a clear reading above that natural variability.

The models are so complex that they can simulate future conditions based on the most minute changes. For example, they can tweak the model to run with a change of one in a hundred trillionth of a degree Celsius (1014) to ocean surface temperature and observe all of the possible future climate scenarios. 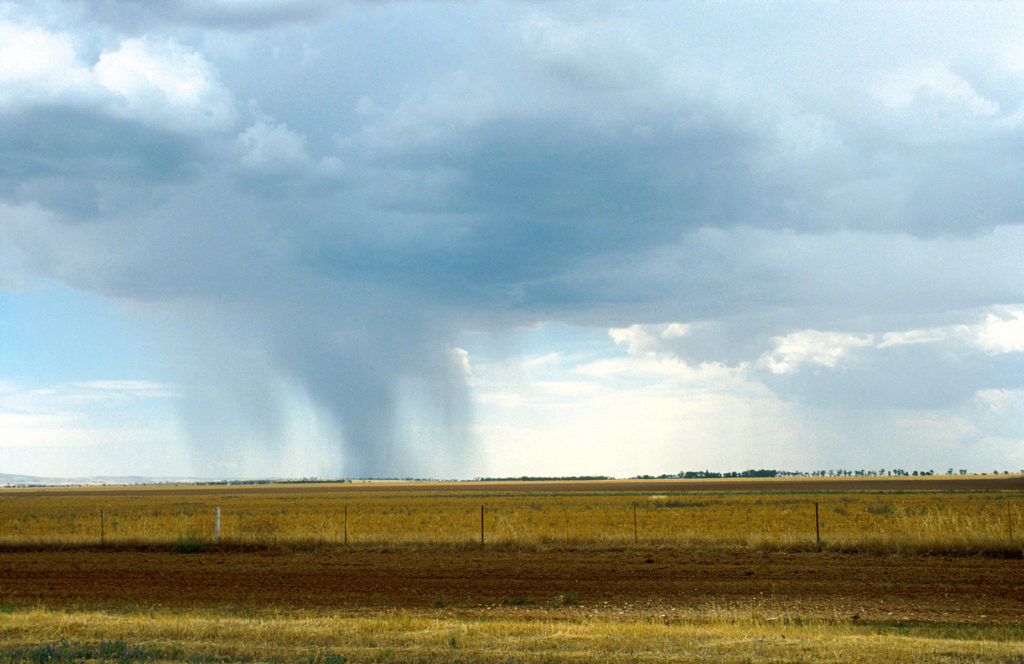 A lot of different factors contribute to our day-to-day weather. ENSO is one of these factors.

4. These models reveal important insights into ENSO over the coming decades

In a recent paper published in Nature, our scientists examined how El Niño activity is connected over multi-century lifespans. When they simulated lower El Niño activity using models over the first 50 years, it led to a greater increase in El Niño activity 150 years later. And vice versa.

This strong link between past and future El Niño activity suggests we can expect more frequent and stronger El Niño activity in the coming decades – up to 35 per cent more activity than previously thought.

Remember how we said we rotate between the two ENSO phases? A strong El Niño is usually followed by a strong La Niña. So, we need to be prepared for strong future ENSO activity.

5. ENSO responds to greenhouse gas concentrations in the atmosphere

We also know that climate change is impacting on the ENSO cycle and is causing it to behave more energetically. This is a challenge for climate models, which may not be able to capture the full range of chaotic nature of ENSO under greenhouse warming. This is because the model system oscillates on a very different trajectory each time it is run.

This can be a challenge for seasonal forecasts and for those who need to understand the climate years out – like farmers and other primary producers. But refining and validating models using observations is an area of active research.

Previous projections have indicated that maintaining global warming to 1.5 degrees Celsius (which will require us to decrease global greenhouse gas emissions) will eventually help to stabilise the frequency of extreme ENSO events.

However, because some greenhouse gases like carbon dioxide remain in our atmosphere for several hundred years it may take a long time (up to a century) for us to reach this point of stabilisation.

Find out more about our work on ENSO

Previous post:
Using data to tackle COVID-19 in Indonesia
Coming up next:
Spotify playlist: Music you can work from home to