Meet our astronomer and engineer who has helped to create a whole new branch of astronomy research and been awarded multiple prizes for his achievements.

Dr Keith Bannister knew from an early age he wanted to do something technical with his life. He says he was always pulling things apart. The bedroom floor of his childhood home was usually littered with wires, screws, nuts and bolts.

“So I chose to study engineering. I then went on to design satellites, which also functioned as telescopes. I knew at that point that I wanted to work in astronomy,” Keith said.

After five years designing satellite equipment, he started a PhD in Astronomy. “It was the most fun and least responsible thing I could think of doing at the time”.

Now, as our principal research engineer for space and astronomy, Keith has been re-engineering functions of our ASKAP radio telescope. He’s seeking out and analysing an elusive mystery of the Universe: fast radio bursts. His work has been recognised in a flurry of awards, including the Academy of Science’s Pawsey Medal, and the Malcolm McIntosh Prize for Physical Scientist of the Year in the 2021 Prime Minister’s Prizes for Science. Keith’s work has helped to open up a whole new area of research in radio astronomy. 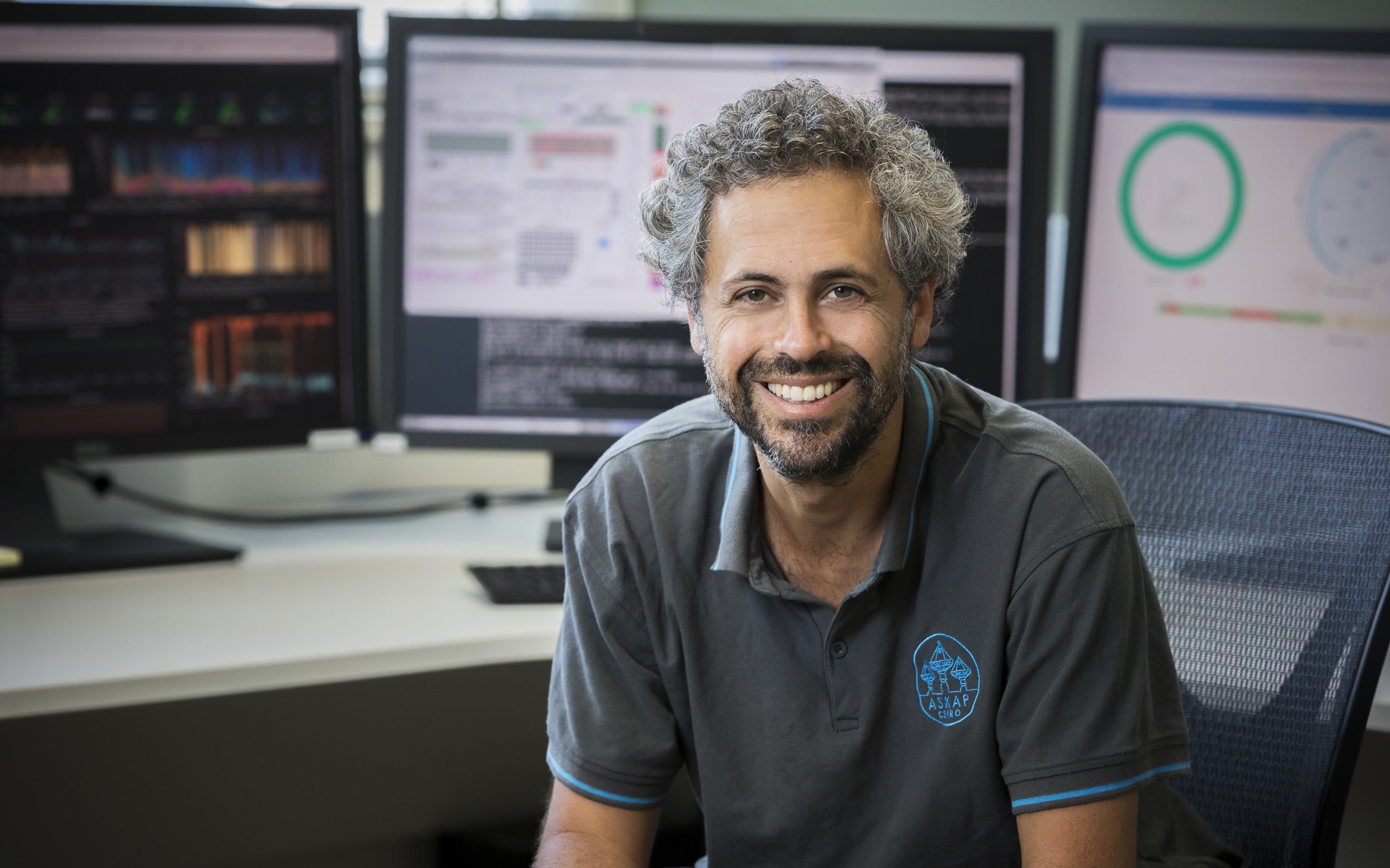 A fast radio burst is a sudden pulse of radio waves that last just milliseconds. The burst has more energy than our Sun emits in 80 years and yet they are extremely hard to detect.

“To find even just one fast radio burst with a telescope as good as ASKAP is incredibly hard. We have to look through so much data. It’s like looking for a needle in a haystack the size of 50 football fields,” Keith said.

The bursts were first discovered in 2007, and until Keith and his team started searching for them in 2017 with ASKAP, only 30 bursts had been found. After Keith modified ASKAP’s sky surveying mode into a ‘fly’s eye’ arrangement, they detected 20 more bursts within 18 months.

Not stopping there, he went on to design a world-class system for ASKAP that could narrow down the origin point of each incoming burst. The novel system was like a ‘live action replay’, recording the telescope’s data stream when a burst was detected. This information enabled other telescopes, including Hawaii’s Keck telescope, ESO’s Very Large telescope and the Gemini telescope in Chile, to help pinpoint the burst’s home galaxy, four billion light-years away.

This achievement won Keith and his team of 54 international astronomers the 2020 AAAS Newcomb Cleveland Prize for the best science paper of the year, presented by the prestigious publication, Science.

“It was a massive team effort. It’s thrilling to be part of cutting-edge science and technology in Australia, and to have it recognised internationally,” Keith said.

Since the discovery, the team has pinpointed many more bursts with ASKAP, and used them to uncover the Universe’s ‘missing matter’. 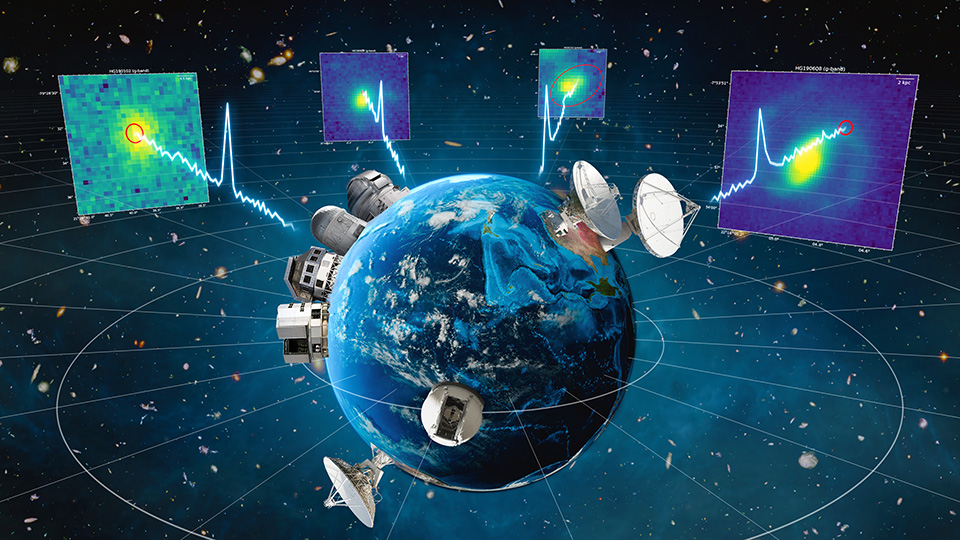 Our ASKAP radio telescope in Western Australia detected the precise location of four fast radio bursts. Other telescopes around the world are joining in to find out more about these bursts. Image: Sam Moorfield.

Using a mystery to solve other questions

While Keith had helped find the origin point of a burst, we still didn’t know what was creating them. We can, however, use them as tools to discover the ‘missing matter’ of our Universe.

Most of us have heard of dark matter, which remains elusive and counts for 85 per cent of the total matter in the Universe. What you may not know is that scientists were still scratching their heads around the amount of ‘normal’ matter (everything that you and I are made of) in the Universe. For decades, scientists had only been able to account for half of all the normal matter that should exist.

By analysing the burst signatures, caused by the radio waves interacting with matter as they travelled through space, Keith and his team could measure the density of the Universe. Their calculations matched what had been missing all these years. If we did not have a reliable way to detect and locate them, the bursts would have just remained an oddity of the Universe. But thanks to Keith and his dedicated colleagues, these still-mysterious signals can provide a purpose.

Every new discovery Keith has made comes with an extra reward: a celebration at home.

“Even before we’d started looking for bursts, I’d been telling my three kids about the plan to find them. Every day when I came home, they’d ask, ‘Did you find a radio burst today, Daddy?’ If I said, ‘no’ they’d say ‘It’s OK, maybe tomorrow’,” he said.

When it finally happened, they were too excited for words. “They looked at me, smiled, and gave me a great big hug!

“We still all get excited whenever we find a new burst. But nothing compares to the first one we found. It was such a thrill. I ran whooping through the house and woke them up! Maybe I should do that again…. Hey kids! …”

At home, Keith is pulling stuff apart and building new things with his kids all the time. They’re currently working on an automated paddle for a kayak. The type of whimsical, creative invention that got Keith into engineering in the first place.

“It’s better than when I was a kid! We’ve got so much going on in this house, it’s an exciting place to be.”

What more do we know about fast radio bursts?

Previous post:
60 years after it first gazed at the skies, the Parkes dish is still making breakthroughs
Coming up next:
Global emissions almost back to pre-pandemic levels after unprecedented drop in 2020, new analysis shows