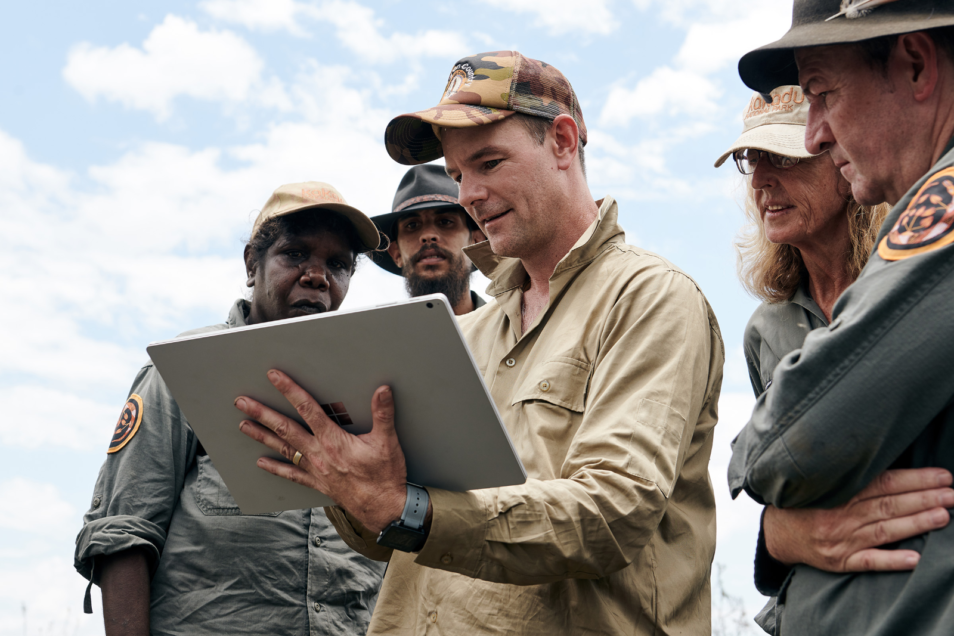 We all know teamwork makes the dream work. That’s the case for Dr Justin Perry, who’s one of our environmental research scientists.

He’s part of a project selected as a finalist for the 2020 Australian Museum Eureka Prizes. Funded by the Northern Australia Environmental Resources Hub of the National Environmental Science Program (NESP), the team works on Bininj Country alongside Traditional Owners, rangers, park managers, software engineers and other scientists. They co-developed a new way to monitor and manage the impact of para grass, which is a weed in Kakadu National Park. And the success of their approach has led to the return of magpie geese to the area, a key indicator of environmental health!

At CSIRO, we work hand-in-hand with Traditional Owners and Indigenous entrepreneurs. We support them to have the capacity, authority, tools and access to resources to drive the development of land and sea enterprises that align with their eco-cultural aspirations.

Additionally, Justin has been front and centre of these collaborations. He currently works in remote parts of Queensland and the Northern Territory alongside Indigenous land managers. His research aims to co-develop culturally appropriate and cutting-edge ways to monitor Australian biodiversity.

Justin gives us more insight into how these partnerships are beneficial for both the environment and local communities, and tells us why he’s interested in this type of work.

As well as supporting rangers and Bininj in Kakadu National Park to manage para grass, Justin also works with land managers to save baby turtles in Far North Queensland.

Baby turtles face several threats when they hatch from their eggs and make their long journey to the ocean. But they need to survive this quick dash if they want to ensure their survival and continue their species.

These threats include feral pigs, goannas and dingoes which disturb the turtle nests at Cape York Peninsula.

When Aak Puul Ngangtam – an Indigenous land management organisation based in Cape York – started monitoring turtle nesting 12 years ago, no baby turtles were making it to the ocean. Since then, a collaborative approach (also funded by the NESP Northern Hub) to the management and monitoring of turtles has led to some amazing impacts.

It started with a shift in the way planning and management was done. And that was led by the Indigenous rangers from Aak Puul Ngangtam and the Wik Traditional Owners.

Justin worked with the community and regional organisations to understand how they looked after the land. This collaboration informed how Justin and the rangers approached saving baby turtles.

“The Wik people have been managing the landscape on the west coast of Cape York Peninsula for tens of thousands of years,” Justin said.

“We established monitoring programs and metrics that were based on local values. This process also shifted the focus of the monitoring from activities that required specialists scientific training to methods that could be done independently by the rangers.” 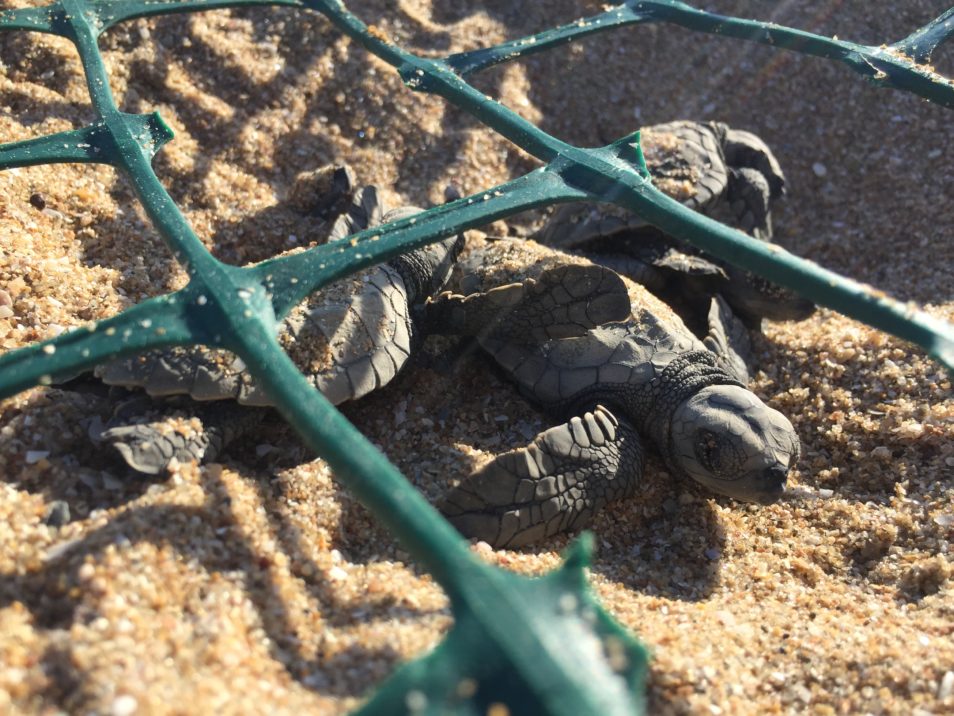 A collaborative approach to the management and monitoring of turtles has led to some amazing impacts. Like this mesh. Image: Gina Zimny

So how did Justin and the team do it?

“CSIRO was invited to be part of a feral pig management project by Indigenous organisations on Cape York to help develop the monitoring methods. These organisations were Aak Puul Ngangtam, Kalan Enterprises and Balkanu. This meant that the intent of the research was led by Indigenous people from the beginning,” Justin said.

“We completed an experiment to test the effectiveness of cheap plastic garden mesh to protect marine turtle nests from dingos, goannas and pigs. Other ranger groups on the west coast of Cape York used aluminium cages and this was very successful at protecting nests.

“We also built a pig-proof fence that stretched across a large sand spit with marine netting that ran into the Gulf of Carpentaria to exclude pigs. This protected 20km of the beach while it was up and running. We also worked closely with Aak Puul Ngangtam to match the data we collected about feral pig control with turtle nest destruction. This allowed us to tailor the management to protect turtle nests in culturally sensitive ways.

“The research and management projects were developed by two of our Indigenous partners, Kalan Enterprises and Aak Puul Ngangtam. And they partnered with a regional Indigenous organisation called Balkanu,” he said.

Justin’s work also involved co-developing useful tools and accessible methods for land managers, which make it easier for them to do their job. This is especially important during a northern Australian wet season. Temperatures can get up to 40 degrees and humidity can be as high as 80 per cent!

“We’ve explored the use of technology to provide near real-time data summaries to the APN rangers,” Justin said.

“This has included the development of automated analysis using data collected from iPad applications, drones and cameras on helicopters.”

Learning on the job

“I’ve been privileged to work in partnership with some of the most amazing people in northern Australia from Arnhem land to Cape York. Additionally, I’ve learnt a huge amount from the Traditional Owners of the land and sea I have been working on,” Justin said.

“Moreover, I work with people that are managing some of the most important natural areas in the world. As we develop better ways to manage conservation challenges with our partners, we are helping to maintain the resilience of natural areas in the face of major global change.”

Additionally, working directly with the community means Justin’s research can be put into practice almost immediately.

“I love to see the work I am doing put into action and seeing real change. Often conservation efforts are difficult to measure. Change can also take a long time or the management actions we are testing don’t work. So, seeing some real changes in the projects I work on has been amazing,” he said.

But he does have some negatives about working in such remote locations.

“My work involves spending a lot of time away from home. I miss my wife and daughters every time I am away.” 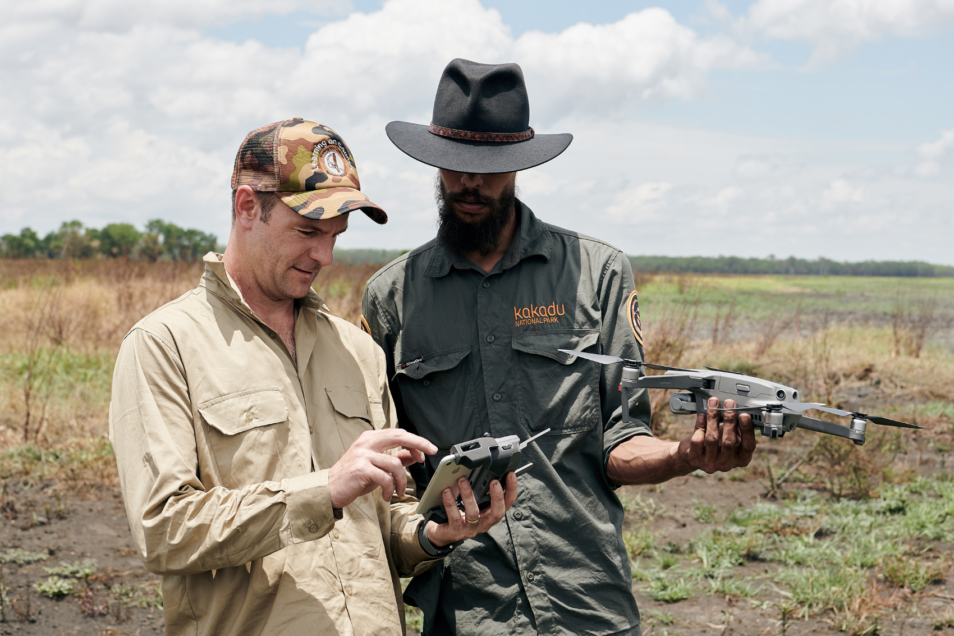 Justin Perry (left) with Park Ranger Kadeem May (right) looking at a drone as part of his work on Bininj Country. Image: Microsoft.

A different kind of scientist

Interestingly, Justin’s career plans did not include being a scientist.

“I didn’t always want to be a scientist. Originally, I wanted to be a park ranger. When I finished university, I worked as a park ranger in remote national parks in the Northern Territory for eight years,” Justin said.

But as a true scientist, he identified a problem and wanted to fix it. That problem was how the science we traditionally know of was treating local knowledge holders.

“While working as a ranger I was not happy with the way science was being delivered to land managers. As a result, I decided to become a scientist myself and work on methods that help land managers,” he said.

And his work takes him beyond a traditional lab environment.

“I don’t really have an average day. I work across lots of different projects that require different skills sets,” he said.

“Some days I will be working on computer programs and other days I will be tackling feral pigs or catching native animals. The modern ‘lab’ is a pretty diverse place!”

You too can save the world through science

Justin has some advice for budding scientists looking to enter a career in STEM.

“My main advice would be to have interests in a lot of different things. Our future ecologists need to have a very diverse set of skills which work across technology, culture and ecology,” he said.

“I started out as a vertebrate ecologist, which is a scientist that studies animals with backbones. But now I spend time working on many different projects from social science to cloud integration for modelling and analysis.”

Ultimately, Justin has this sage career advice regardless of the field you’re looking to enter.

“Never stop learning. There are so many interesting things to explore.”

Read more about Indigenous-led approaches to strengthening and sharing our knowledge for land and sea management in the new Our Knowledge, Our Way Guidelines

Previous post:
Diving deep into the shallow reefs of Ningaloo Reef
Coming up next:
Best in class: award-winning advice from engineering student