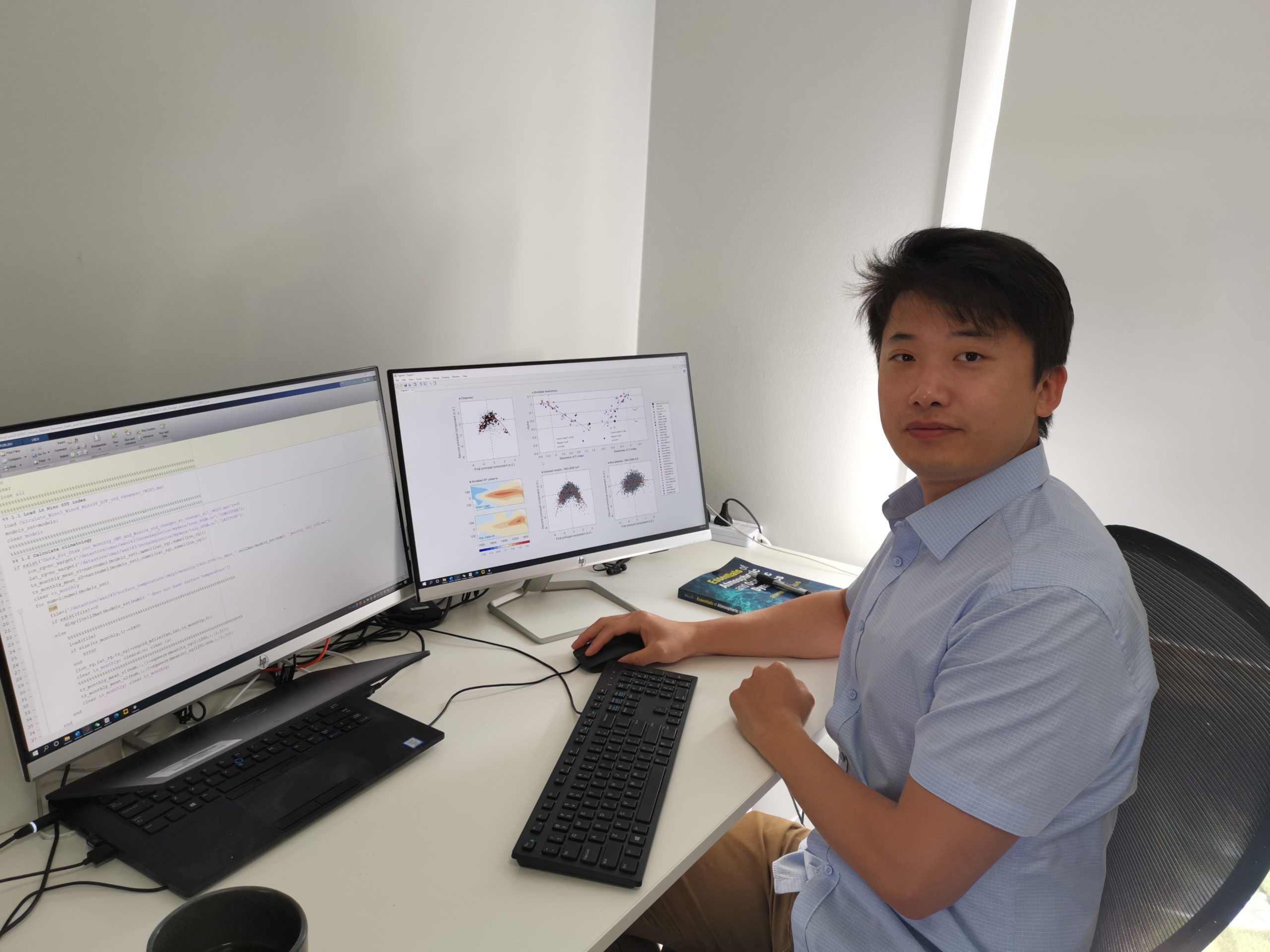 Scientists have been studying the El Niño Southern Oscillation (ENSO) and its impacts for decades. We have a dedicated research team at The Centre for Southern Hemisphere Oceans Research (CSHOR).

This team includes Dr Guojian Wang. He explains ENSO and the Indian Ocean Dipole (IOD), and tells us a bit more about how he got to where he is.

It began with El Niño

Off the Peruvian coast, many decades ago, two fishermen noticed something strange. The coastal waters were warmer than usual every so often around Christmas time. As a result, they called this “El Niño”, which is Spanish for ‘Christ Child’ or ‘The Little Boy’.

But the warm oceans in South America weren’t the only thing happening in the Pacific Ocean.

Decades later, Sir Gilbert Walker discovered the “Southern Oscillation” which saw changes in the sea level pressure and surface temperatures across Indonesia and tropical areas of the Pacific Ocean.

But it wasn’t until the late-1960s that a team led by Jacob Bjerknes realised these two events — changes in both the ocean and atmosphere in the Pacific Ocean — were linked.

As a result, the El Niño Southern Oscillation (or ENSO) was coined!

So, what are the ENSO and IOD?

ENSO is a hot topic on everyone’s list. After all, we’re coming off the peak of an ongoing La Niña. This meant seeing a lot more rain than usual in Australia, particularly in eastern Australia. Guojian explains why.

“ENSO is the most important year-to-year change of our planet’s climate system. It varies irregularly between cold (La Niña) and warm (El Niño) conditions. And it happens every two to seven years,” he said.

“During an El Niño event, the normally dry and cold central and eastern tropical Pacific Ocean becomes warm. As a result, rain in the western Pacific moves east towards South America. This leads to increased rain there and drought over northern and eastern Australia.”

La Niña is the opposite phase of El Niño and the rain moves west towards Australia. The western part of the Pacific Ocean becomes warm, leading to increased rainfall over Australia. If you’d like more information, we’ve got a handy cheat sheet.

Guojian also works on ENSO’s Indian Ocean counterpart – the IOD. It’s a similar system. Cool ocean temperatures in the eastern equatorial Indian Ocean combine with warm temperatures in the west. This is known as a positive phase. When the opposite happens, it’s known as the negative phase. Think of the IOD as ENSO’s next-door neighbour, with Australia acting as the fence.

ENSO and the IOD may join up to influence our weather. Guojian investigates how both work and respond to climate change. 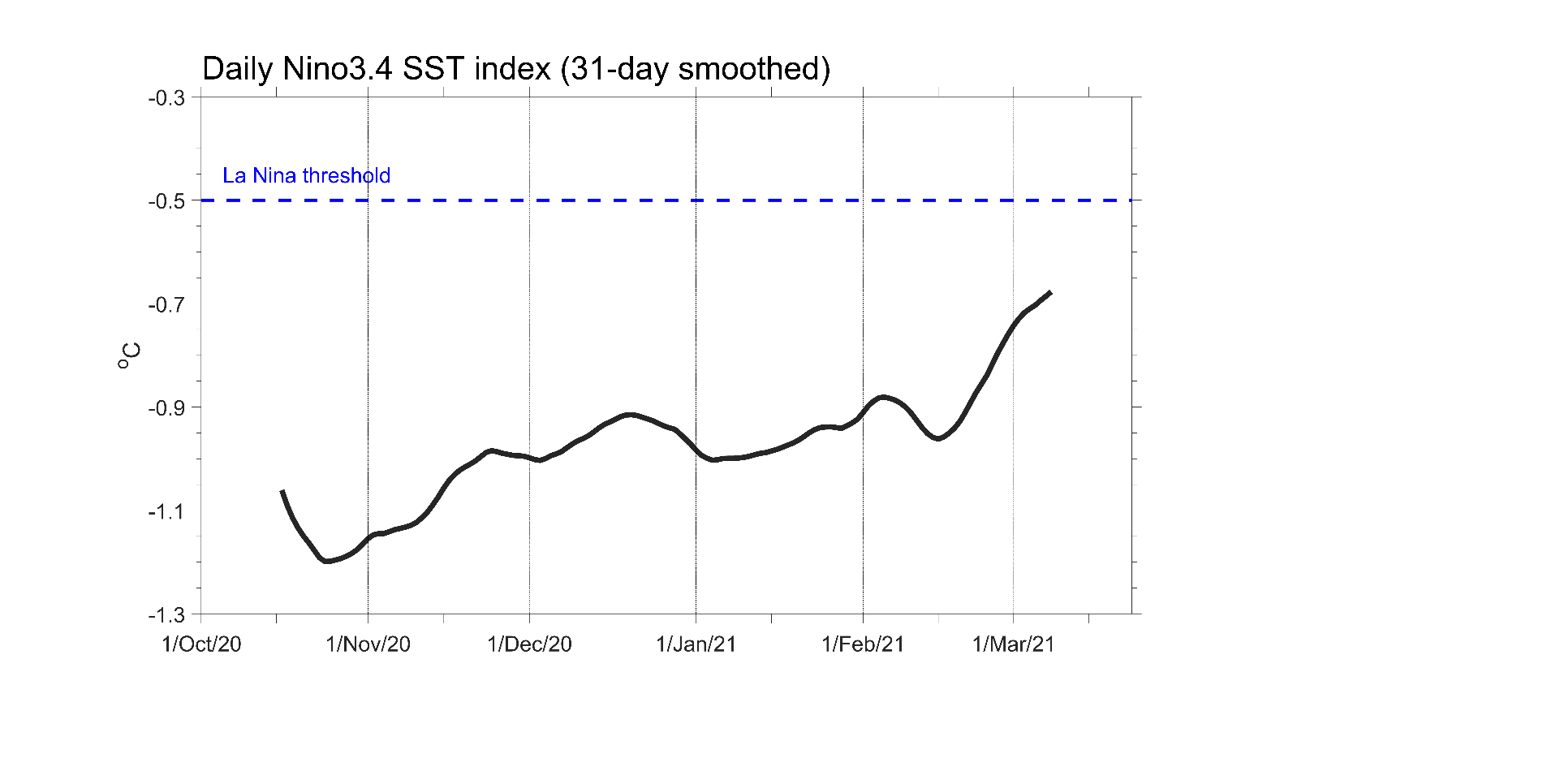 A La Niña event is defined as when the sea surface temperature over the central-to-eastern equatorial Pacific Ocean (Niño3.4 region) exceeds -0.5°C for at least five consecutive months. The graph above shows that the 2020/2021 La Niña event is still ongoing.

A typical day in the lab for Guojian

To figure this out, Guojian works alongside his team at The Centre for Southern Hemisphere Oceans Research (CSHOR). It’s our dedicated space that investigates the role of our oceans in the global climate.

He mainly looks at data, joining the puzzle pieces together to answer specific climate questions. These inform most of his insights and helps project any future changes to ENSO and the IOD.

“We use available data to look at the differences of an event. We also propose hypotheses, particularly if large-scale phenomena like El Niño, La Niña and the IOD can explain the extremes,” Guojian said.

“I utilise data from observation and climate models. But this part of my job is thanks to many world-leading research organisations of different countries who’ve provided different data streams from multiple sources.

“These include satellites, in-situ observations, ship-based networks and autonomous floats. These allow any insights into the ocean’s subsurface to become really clear.

“I also use simulations from coupled climate models. They provide a large amount of dynamically consistent data,” he said.

For Guojian, climate research mainly happens on a computer. But he doesn’t only look at numbers and graphs. He also looks at other forms of information to fill gaps in his research.

“My team also looks at all available historical events. We then synthesise their details into a cohesive set of themes. They help us better predict and project ENSO and the IOD based on what’s already happened,” Guojian said.

He likes to plan out his day in advance, prioritising his tasks based on urgency. However, extreme events can occur and these require him to think on his feet.

“When these events happen, we often want to know as soon as possible what causes them. Despite how sad these events are, it creates opportunities for us to add data to our wider research on climate systems,” he said. 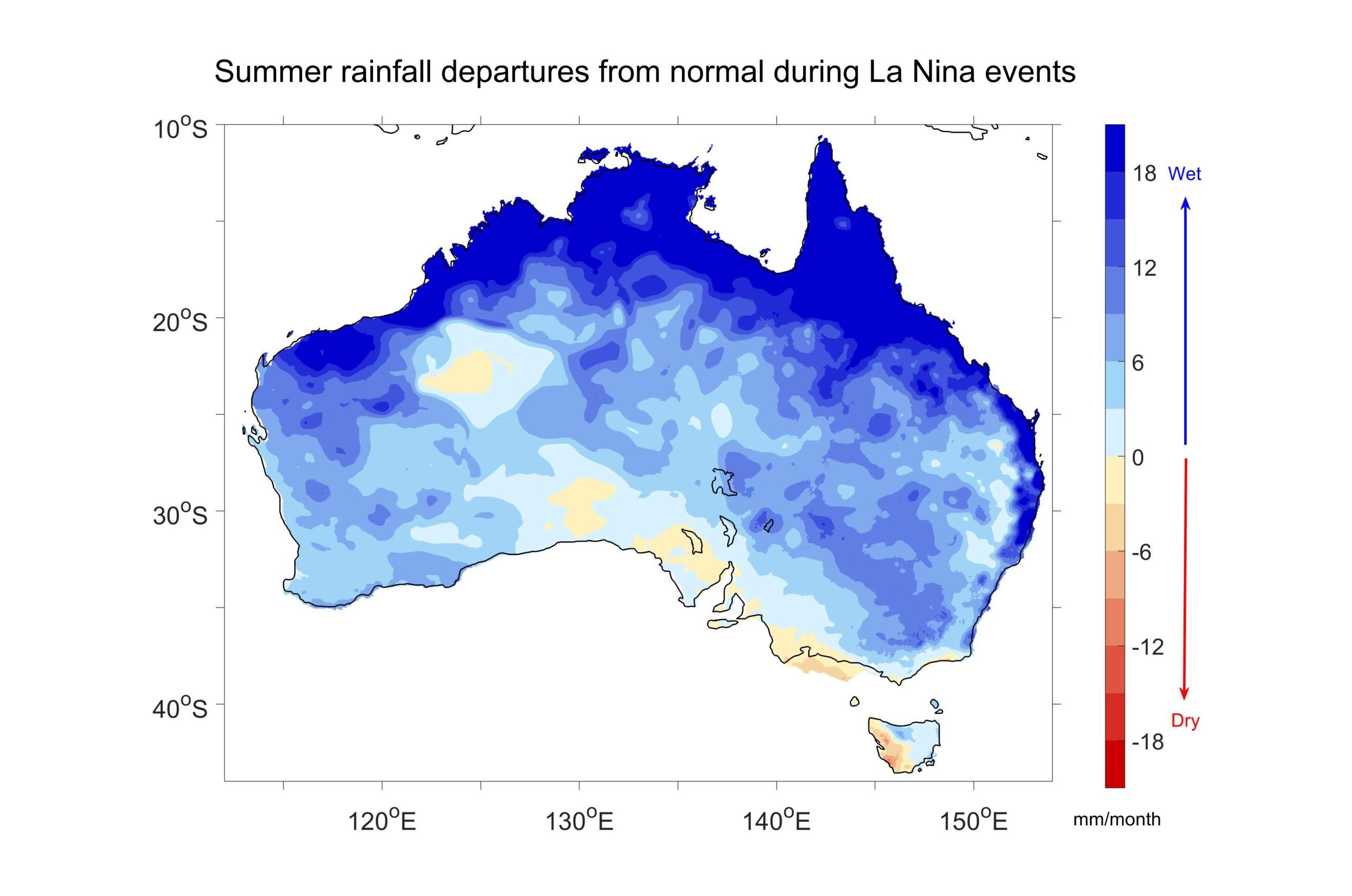 La Niña leads to increased rainfall over Australia during the austral (or Southern Hemisphere) summer. The graph shows what that looks like.

The future for climate

Guojian’s research to figure out both ENSO and the IOD allows him to answer these questions better. But it also helps him figure out what to expect in the coming decades.

“If we know ENSO and the IOD better, we have a better chance of predicting them. The better we can predict these events, the better we can protect vulnerable communities affected by severe climate events,” Guojian said.

“There are massive socioeconomic impacts of such extreme climate events. So, my current and future research focus is on looking for better and more reliable information. This helps us better predict and project climate events. This is important as they both have huge impacts both here and around the world.

“For example, the extreme El Niño event in 1997 caused widespread environmental disruptions. This included the disappearance of marine life and decimation of the native bird population in the Galapagos Islands. Additionally, there was severe bleaching of corals in the Pacific Ocean and beyond. The impacts extended to every continent and caused US$35–45 billion in damage and claimed an estimated 23,000 human lives worldwide,” he said.

Closer to home, we can see the effects of both. El Niño and the positive-IOD influenced the 2019-20 Black Summer bushfires which affected significant parts of the country. Other positive-IOD events have led to other bushfires in south eastern Australia, like the 1983 Ash Wednesday and the 2009 Black Saturday bushfires.

“Our research helps identify the precursors to help predict ENSO and the IOD. We also assess how they’ll change under climate change,” Guojian said.

“That is essential for long-term risk assessment, resource management, and infrastructure investment.”

A wave leads to a career

Outside of his research, Guojian has a deep connection to the ocean. So, it makes sense his research centres on the relationships between the ocean and climate.

“I’ve always been interested in mysterious stories about the ocean and fascinated by the lifestyle living in a coastal city since I was a kid,” Guojian said.

“I chose to study physical oceanography at the Ocean University of China. It’s in Qingdao, which is a famous seaside city known for Tsingtao beer. It’s the business card of Qingdao! During my time, I learned how important the ocean is to human life. As a result, I began researching the ocean’s role in climate for my PhD.

“Then an opportunity arose for me to work in CSIRO after I obtained my PhD in 2014. I have been thoroughly enjoying the research environment at CSIRO,” he said.

Interestingly, if Guojian’s work didn’t centre on the ocean, his alternative career would have kept him firmly on land.

“If I wasn’t in climate science, I would probably be an orchardist. My father used to own an orchard when I was young. It’s always amazing to observe the growth cycle of a fruit tree, from a sapling to be able to produce fresh fruits,” he said.

“However, that needs climate information. So, it might take me back to climate science anyway!”

Nevertheless, Guojian finds ways to incorporate his interest in flowers into his current life. His favourite thing to do outside of work is to tend to his garden.

“It’s important to keep a work-life balance to stay healthy. So I make sure I go for a long walk after a day of working in front of a computer just to refresh and recharge for the next day,” he said.

Advice for the next generation of climate scientists

Guojian’s work can help us understand more about extreme weather events and climate change both for now and in the long-term. It’s a rewarding job, and Guojian loves it.

“Science can be tough. One often needs to work on a question for months if not years. It requires perseverance and determination. There may not be a full answer to a question, therefore, asking the right questions is important. However, it’s gratifying, and I like to think I help make a difference,” he said.

Guojian has this to say for those looking to enter a climate science career.

“Doing climate science is most rewarding, as it tackles big questions with real-life implications. With climate change recognised as one of the most important issues in our time, the scope for contribution is vast. It’s an exciting and worthwhile field to enter into for those who want to make a difference.”

See what else The Centre for Southern Hemisphere Oceans Research does

Previous post:
How can agrifood respond to our modern tastes?
Coming up next:
Teaching the beauty, power and usefulness of maths