Scientists on our research vessel (RV) Investigator are uncovering the denizens of the deep that lurk in the ocean far beneath the waves.

It could be the script from a horror movie. Denizens of the deep!

You’re surrounded. Step off the island and strange, hungry creatures are waiting for you in the deep water. This isn’t fiction though. This is the life found in the deep ocean that surrounds our island continent of Australia.

It’s a world of jelly and fangs where denizens of the deep lure each other to their deaths or wait for life to fall from the waters above to become their next meal.

It’s deep ocean life that is rarely seen and largely unknown. This is what draws teams of scientists onboard our research vessel (RV) Investigator to search the depths on voyages of biodiversity discovery. What they find is frequently new to science and is always fascinating.

Dive beneath the waves and meet seven magnificent denizens of the deep! 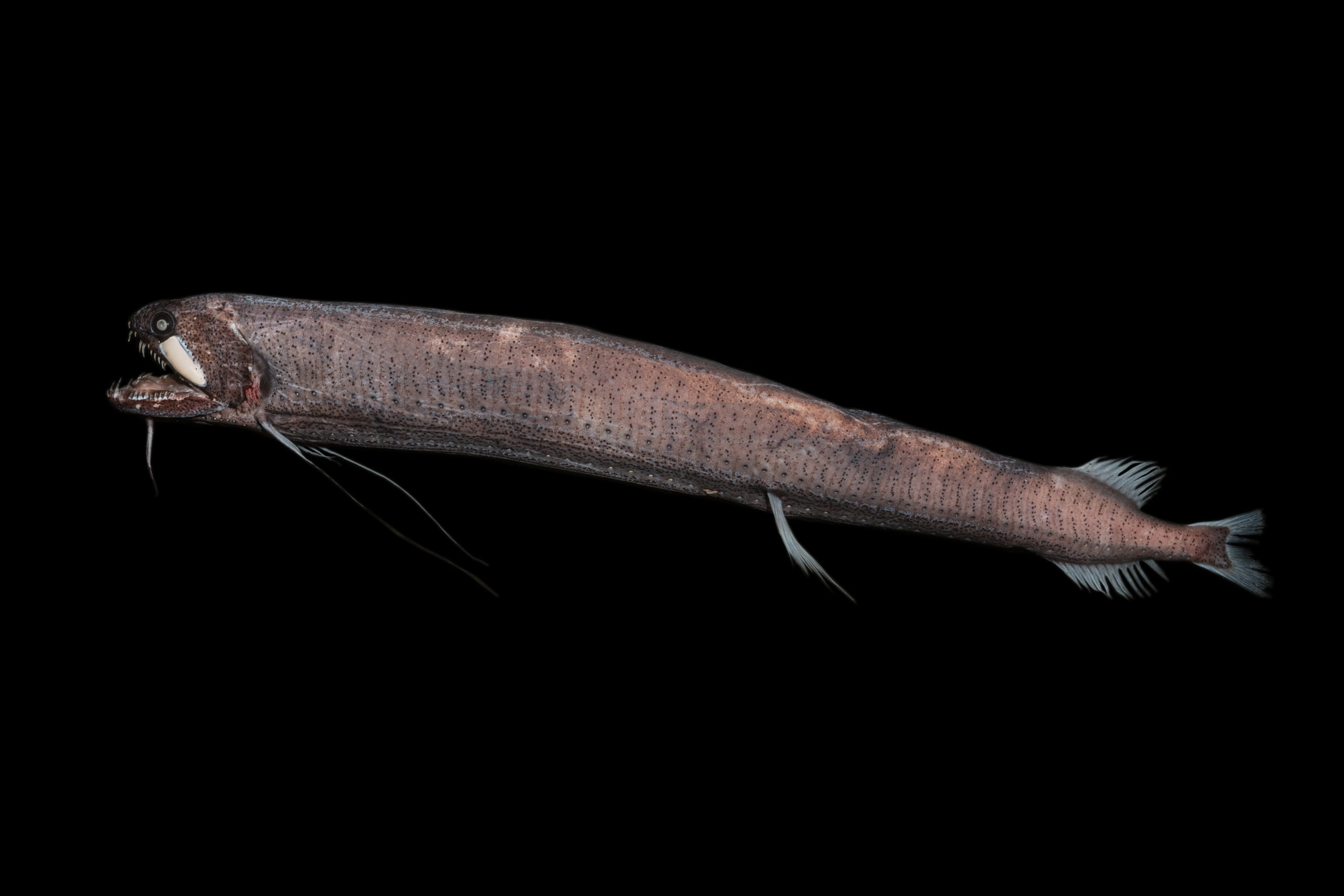 The threadfin dragonfish is a mouth with a fish attached to it —a mouth filled with transparent fang-like teeth. To emphasise the point, deep sea dragonfish belong to the family Stomiidae, which literally means ‘mouth’ in Latin.

This large black dragonfish is a fast-moving, aggressive hunter of the dark ocean. And did we mention it can glow? It has a bioluminescent tentacle beneath the lower jaw and a large triangular luminous organ positioned behind the eye. It also has a row of photophores (light organs) that runs along its body which emit blue and pinkish light. The dragonfish uses these glowing lures to attract both its prey and a mate. Adorable.

How big are they you ask? Threadfin dragonfish grow to 37 cm. 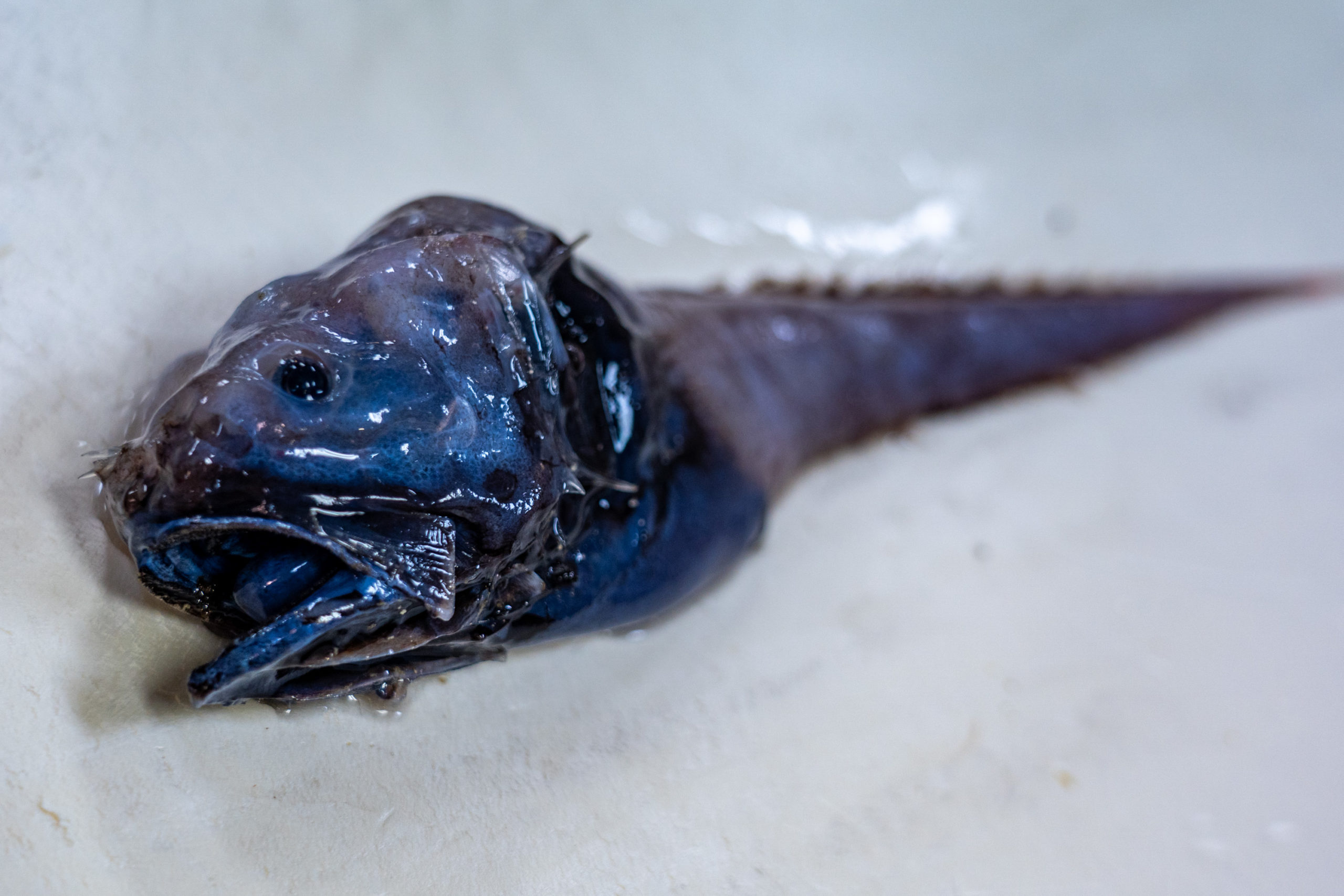 Another deep-sea looker with a name that does it no favours. The bony-eared assfish is a type of cusk eel with a minute brain and large ears. It holds the record for the smallest brain-to-body weight ratio of all vertebrates. Saving energy is key to survival, so this fish spends its days floating above the seafloor, waiting patiently for prey to pass by. With its relaxed lifestyle, this denizen of the deep can operate on very little brain power.

In contrast to its name, the bony-eared assfish is a soft and flabby fish, similar to many other fish that have evolved in the crushing pressures of the deep ocean. The first-ever specimen of this species was collected north of New Guinea during the HMS Challenger expedition from 1872-1876.

This denizen of the deep grows to 38 cm. 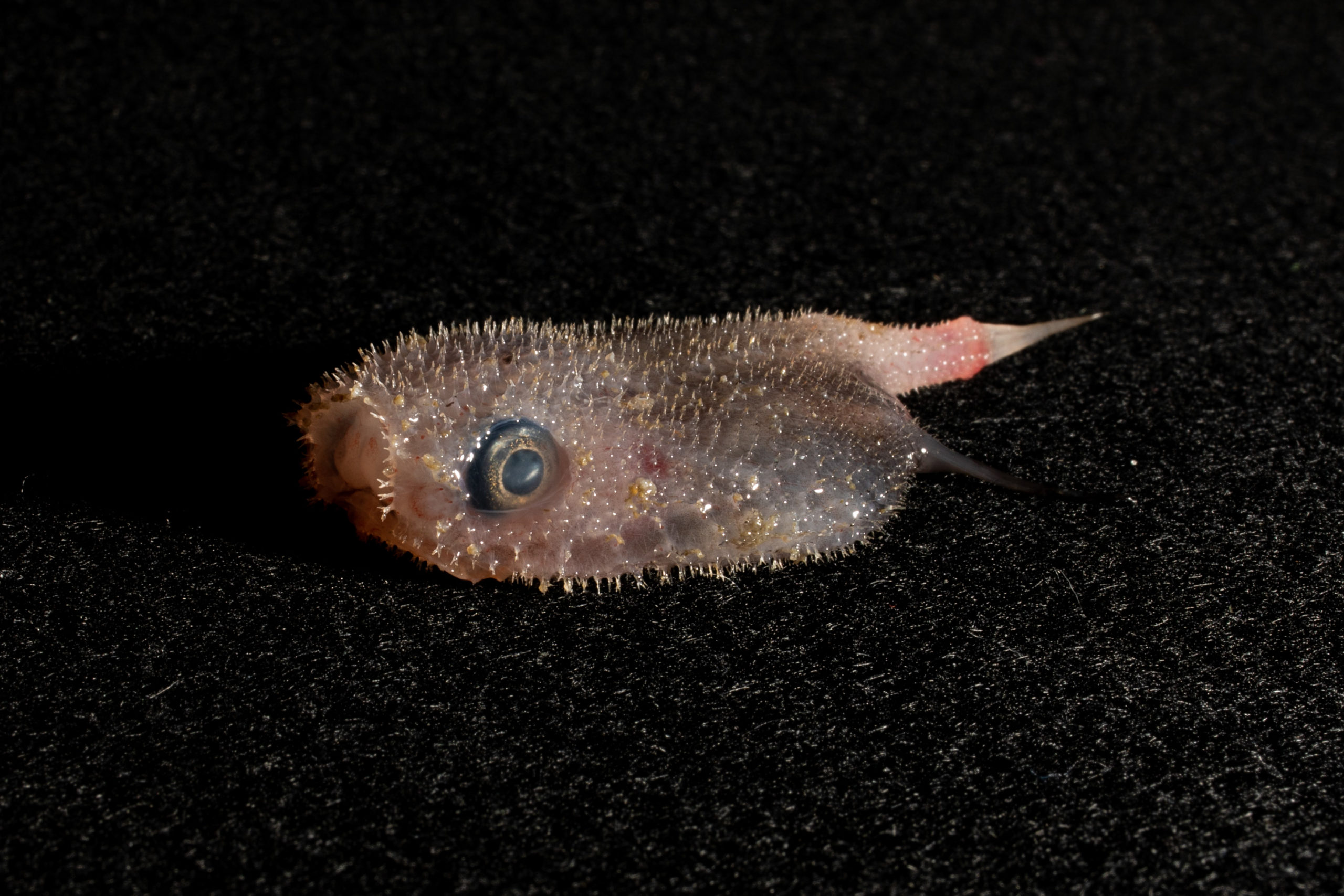 This little boxed-shaped fish has reinforced, sturdy pectoral fins that it uses to walk across the seafloor (similar to the Tasmanian handfish). They have evolved pointy, pyramidal scales that look a bit like hairs. This gives the fish the appearance of wearing a little furry coat.

Batfish crawl about the sea floor ambushing prey. You can find them worldwide in tropical and subtropical seas. The batfish shown here was found crawling about the Eye of Sauron, a volcanic seamount discovered in the deep ocean near Christmas Island.

This batfish grows to 5 cm. The sea pig is another denizen of the deep. It was found in the Coral Sea Marine Park during the 2017 Sampling the Abyss voyage. Depth 1761-1770 m. Image: Asher Flatt.

Sea pigs are a type of sea cucumber with little tube-like legs. They use their hydraulically powered legs to march across the abyssal plain, hoovering up microorganisms and detritus (bits of dead organisms) as they go. Sea pigs gather in great herds where food is abundant and have been called the vacuum cleaners of the sea.

Sea pigs have soft, squishy skin into which parasites like small snails and crustaceans will burrow and live. However, to stop them from becoming a snack for larger denizens of the deep, the skin of a sea pig is laced with poison for protection. 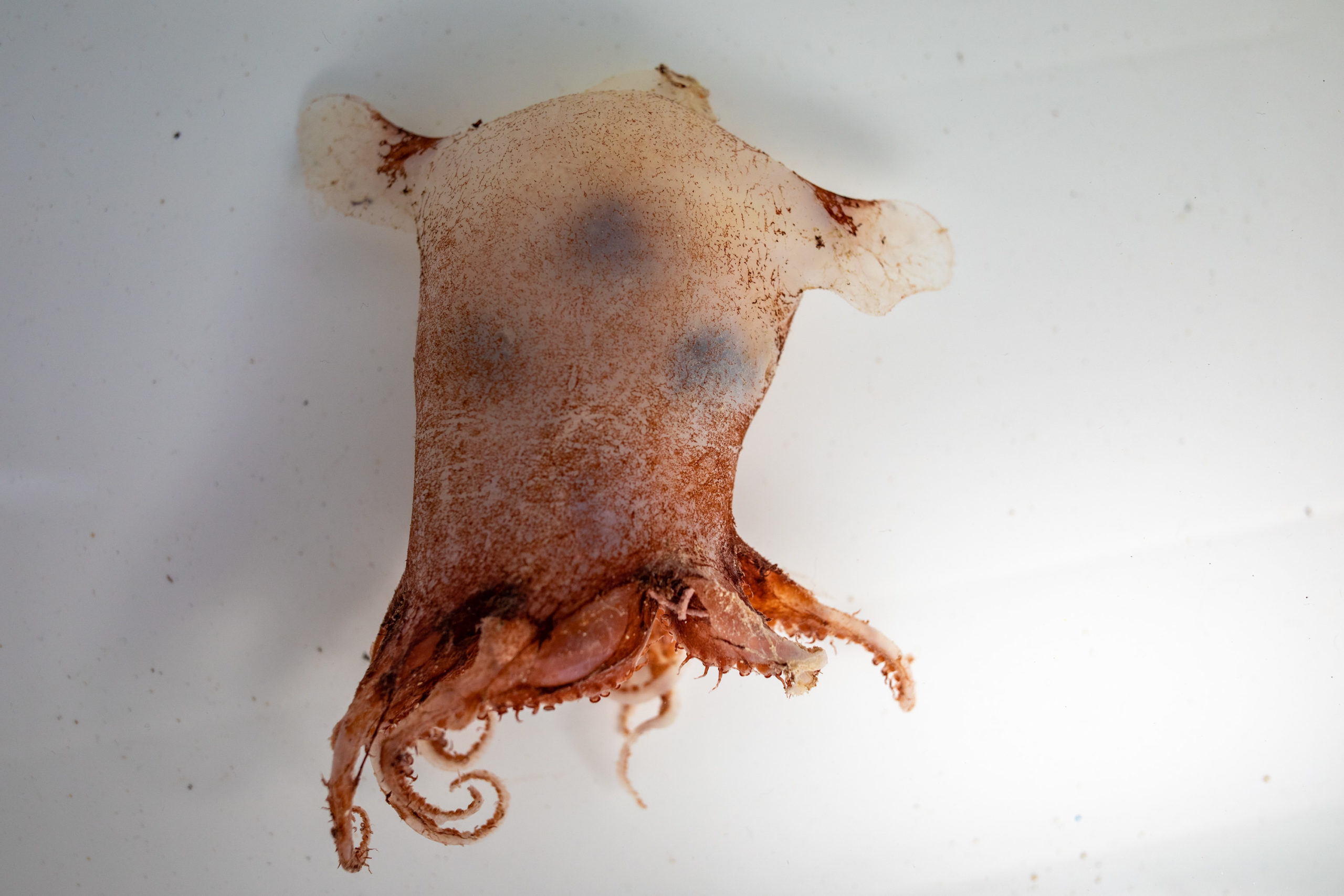 Scientists gave the Dumbo Octopuses their nickname for their large fins, which resemble the ears of Disney’s Dumbo the Flying Elephant. These creatures use these fins to glide gracefully from one spot to another. Dumbo Octopuses are foraging predators that eat deep-sea invertebrates swimming above the seafloor.

Of all known octopuses, these live the deepest. They can be found in waters up to 4000 m deep.

Dumbo octopuses are rare, and the deep sea is huge, so the chances of finding a mate are slim. To increase the likelihood of successful reproduction when they do bump into a mate, females carry a supply of eggs in different stages of development. They can also store sperm for long periods of time after mating, meaning females can fertilise their eggs whenever the conditions are right. Squat lobsters are flattened crustaceans with long tails held curled beneath the body. They have large front claws, up to twice as long as their bodies, that they use for defence and to catch prey. Squat lobsters generally eat small marine worms or crustaceans but aren’t fussy and will also scavenge dead animals. Squat lobsters are decapods, meaning they have ten legs. The first pair of legs are the claws, the next three pairs are used for walking, and the fifth pair has small claws and is used for cleaning gills.

This squat lobster grows to 10 cm. 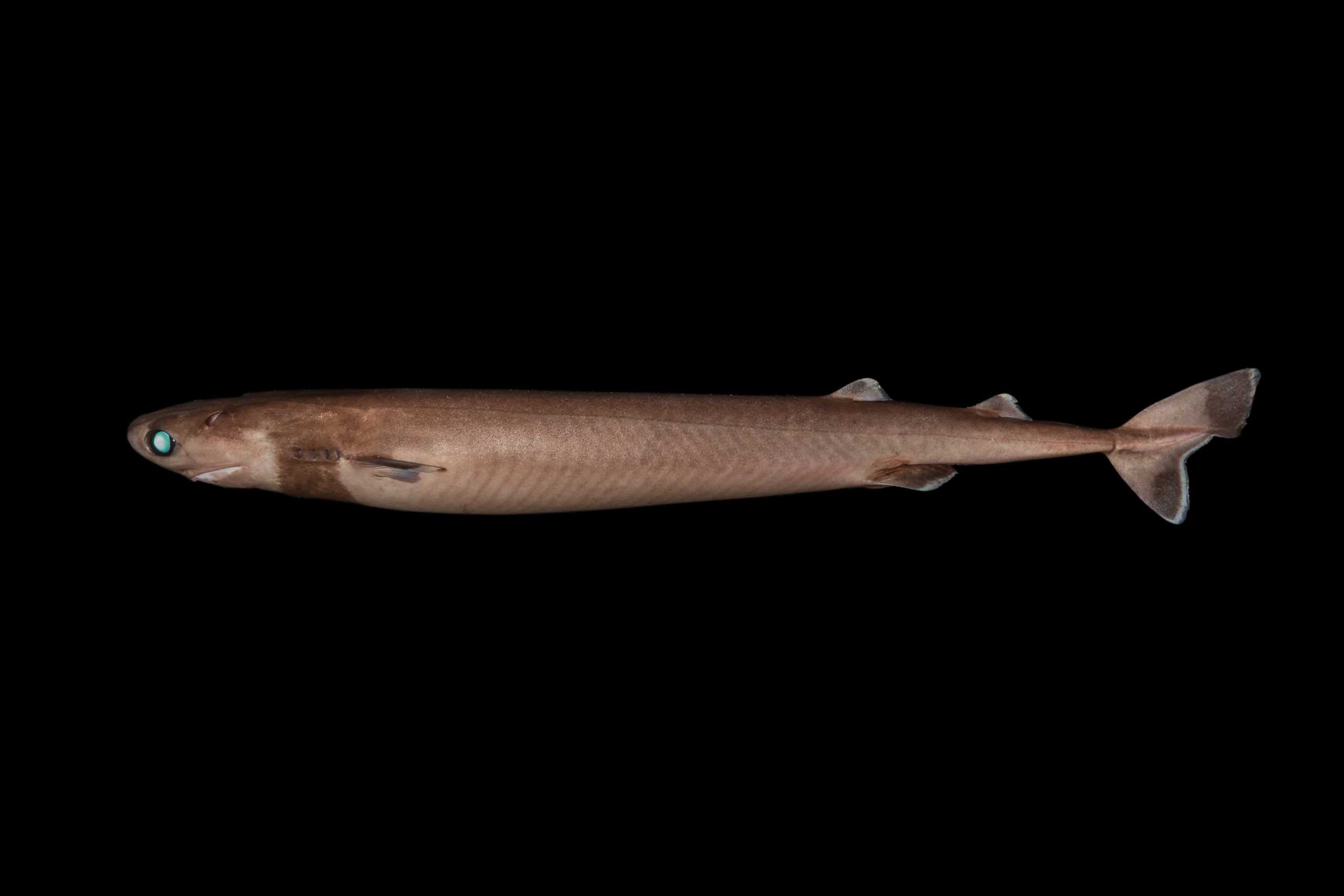 The cookiecutter shark is a master of the jump scare. While small, this shark preys on marine animals much larger than itself using sudden, surprise attacks. Cookiecutter sharks use their sharp slender upper teeth, fleshy lips, and muscles in the pharynx to suck onto and grip their prey. They then bite into the flesh with their lower jaw teeth and spin around. This carves out a plug of flesh for them to eat, like using a cookie cutter in cookie dough.

Frighteningly, cookiecutter sharks aren’t fussy eaters. They can take chunks out of humans, underwater cabling, and rubber seals on submarines. They’re also bioluminescent and use this for a type of camouflage called counterillumination. The cookiecutter sharks collected during the 2017 Sampling the Abyss voyage were the first time that people found this shark in Australian waters.

How big? This cookiecutter shark grows to 55cm.

Protecting our denizens of the deep, both seen and unseen 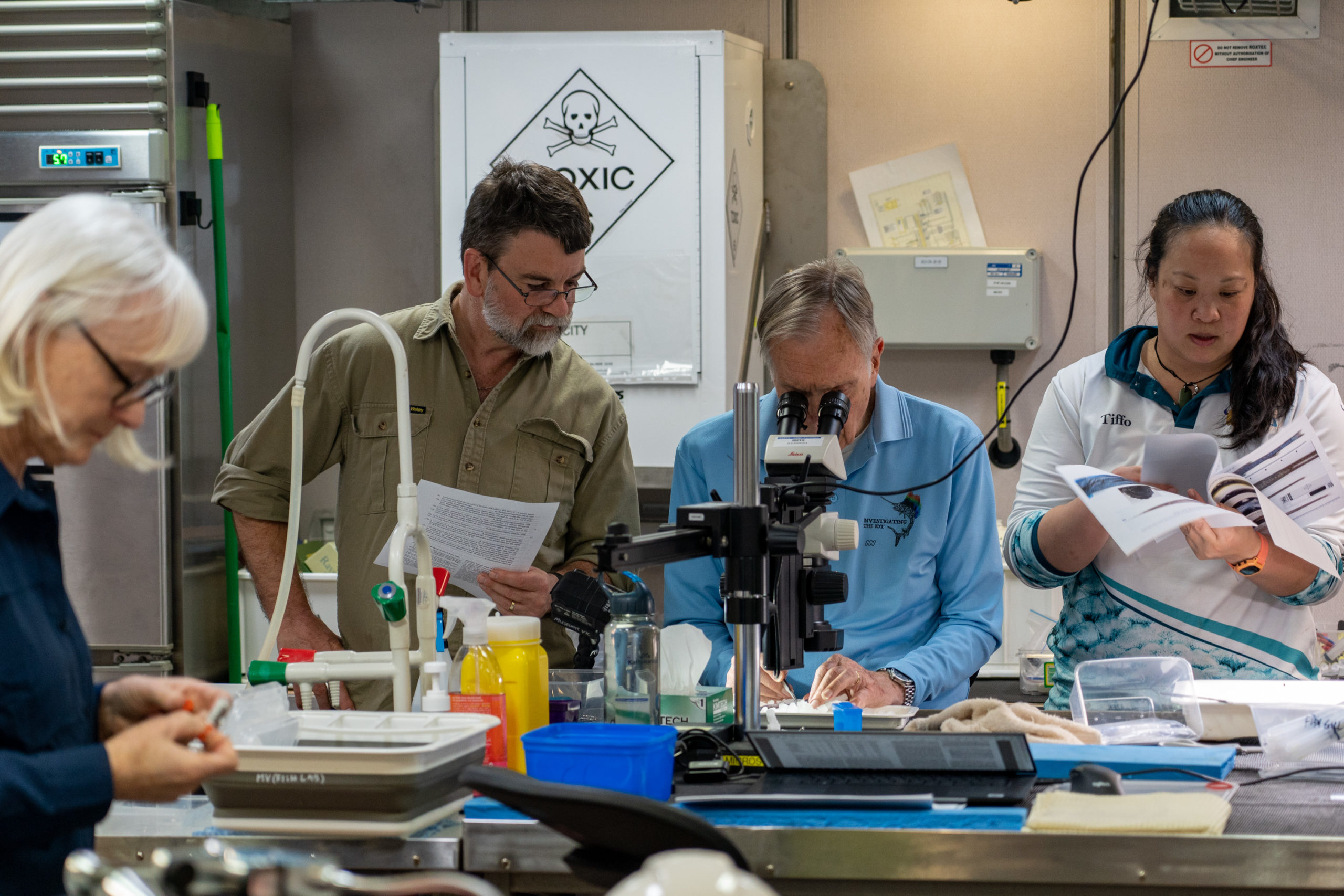 Researchers onboard RV Investigator examine and describe denizens of the deep during a biodiversity survey voyage. Image: Museums Victoria/Robert French.

In addition to being the stuff of nightmares, uncovering these denizens of the deep is important for understanding and managing our precious marine environments.

Marine managers, such as Parks Australia, use the baseline data collected on voyages such as these to inform the location and management of marine parks. This helps protect these unique habitats and the species that live in them.

Australia has more than 50 magnificent Australian Marine Parks established around our coastline. Along with marine parks established by state and territory governments, these cover 3.3 million square kilometres or 37 per cent of our oceans.

And this area is growing.

Data from the most recent biodiversity survey by RV Investigator in the Indian Ocean Territories will be used to help inform the establishment of new marine parks in these pristine waters. This will help protect more of our denizens of the deep.

These seven species were collected by collaborative research teams during two voyages on RV Investigator led by Dr Tim O’Hara from Museums Victoria. Since its first research voyage in 2015, RV Investigator has helped scientists discover more than 1000 new marine species. We can’t give you an exact number as scientists can’t keep up with describing and naming them all!