A new approach to culling crown-of-thorns starfish on the Great Barrier Reef has significantly reduced their numbers helping the coral return. Updated 31 August , 2022

It’s taken a well-coordinated army, but researchers and reef managers are finally toppling the crown.

The crown-of-thorns starfish that is.

These hungry critters have been a long-time predator of coral. Their tasty battle ground is the beautiful Great Barrier Reef.

They feed by extruding their stomach out of their bodies and onto the coral reef. Then they use enzymes to digest the coral polyps.

Crown-of-thorns starfish (COTS) are a native coral predator. On an ‘average’ reef on the Great Barrier Reef it takes as few as 5-6 adult COTS per hectare to cause a decline in coral cover. But COTS outbreak densities are frequently much higher than this and result in massive reductions in coral cover. This puts added pressure on the reef in addition to threats like bleaching and climate change.

However, unlike bleaching and climate change, there are management actions we can take today to immediately reduce the impact of crown-of-thorns on the Great Barrier Reef. We can help protect and increase the amount of coral on the Reef. We can also increase its capacity to cope with other cumulative stressors.

And this is exactly what Australia’s crown-of-thorns starfish Control Program is doing. It’s using an adaptive management approach to reduce numbers of coral-eating starfish at key reefs across the Great Barrier Reef. So much, in fact, that the coral at those reefs is now growing faster than the starfish eat it.

You and what army? 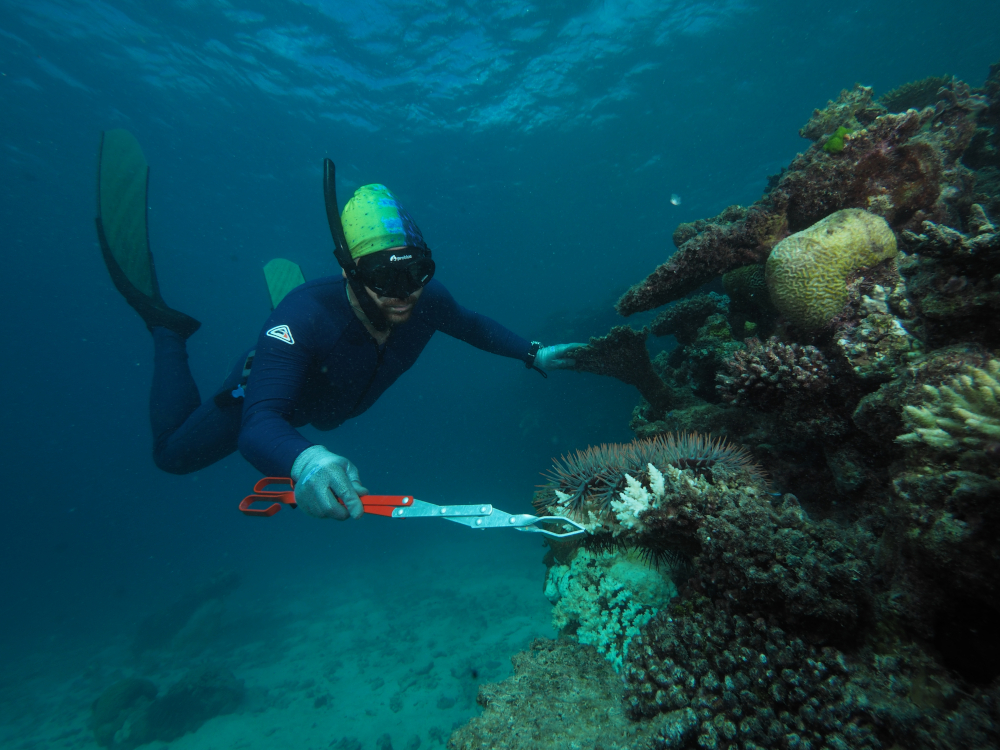 A diver collects a starfish for research. Credit: David Westcott

The Great Barrier Reef is currently in the midst of its fourth major COTS outbreak since the 1960s.

This current outbreak has been underway since 2010. Researchers, working with the Great Barrier Reef Marine Park Authority, the Reef and Rainforest Research Centre, and a wide range of other research, government and industry collaborators have been testing their new Integrated Pest Management strategy on more than 160 priority reefs across the Great Barrier Reef. Almost 150 people are employed in the Program. This includes managers to professional COTS divers (including Indigenous and youth trainees) and control vessel operators. The team has culled more than a million starfish.

The new process means the team can adapt quickly based on up-to-date information. It also considers research on the starfish’s biology and reef ecology. 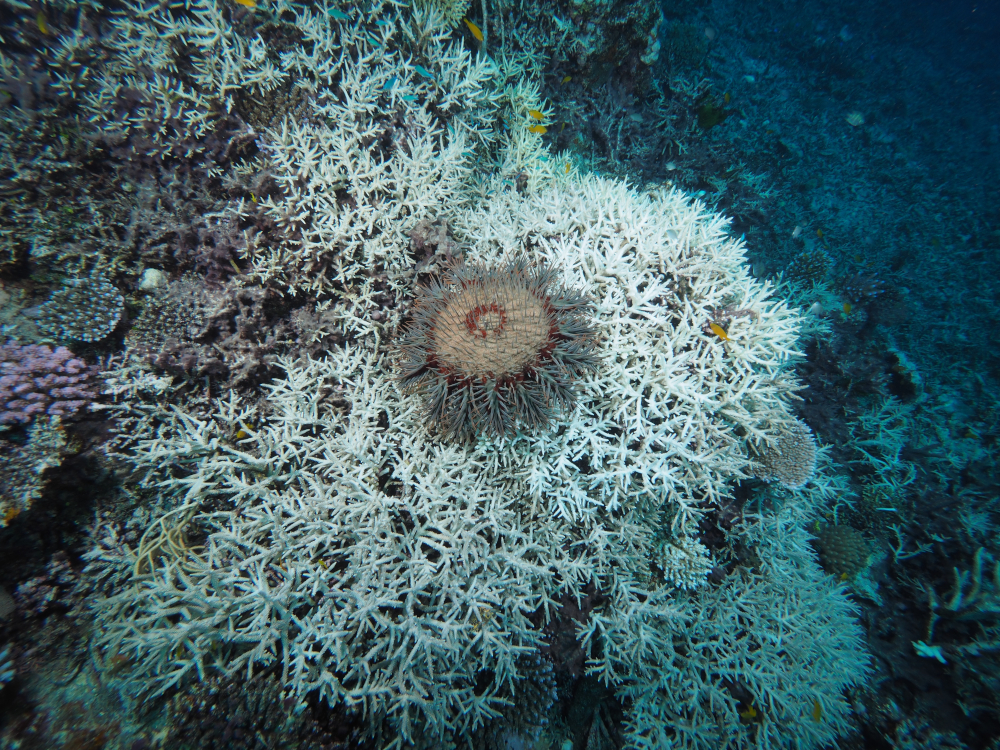 Crown of thorns starfish surrounded by the white dead coral it has eaten. Credit: David Westcott.

The key to the success of the Program has been the coordinated and strategic collaboration between researchers, managers and on-water crews. Together they have designed a Program that is matched to the ecology of the starfish and the Great Barrier Reef.

Our researchers, along with colleagues at a range of other institutions, provide guidance on the design of the program. This includes guidance on which reefs are most likely to contribute to starfish spread and the maintenance of healthy coral ecosystems as well as new insights into the ecology of starfish.

Reef managers coordinate the activities of the Program across the Great Barrier Reef. They prioritise where control actions will take place next in order to protect coral critical to the resilience of the Reef. They also analyse control program data to ensure that the Program is achieving and maintaining its objectives.

On-water crews then visit these priority reefs. They collect targeted information to assess where on each reef to dive to remove starfish most efficiently and to know when they have removed enough of the starfish to effectively protect the reef. Divers inject the starfish with either vinegar or bile salt solution, killing them quickly and effectively without negatively impacting the marine environment.

Victory for the taking

The Crown-of-Thorns Starfish Control Program’s success marks a huge milestone for scientists, managers and on-water control teams. They have now shown that the approach to culling they have implemented since 2018 is effectively reducing crown-of-thorns starfish. It is also successfully protecting coral at both reef and regional scales.

As a result, the Federal Government has announced funding of $162m until 2030 to help win the war against COTS.

This funding will allow the Program to maintain six to seven fully-crewed boats over the next eight years. This will be a crucial time in the expected outbreak cycle on the Great Barrier Reef. This will address what remains one of the most significant threats to the reef.

Thanks to a coordinated control program and strategy, researchers and managers from a range of institutions including ourselves have been instrumental in addressing the starfish problem. This great work is now being built on to drive further innovation in starfish control under the Crown-of-thorns starfish Control Innovation Program research partnership.

More information on the crown of thorns starfish great barrier reef research that underpins the control program is available in the technical report.

Dive into more of our crown-of-thorns research