Avoiding that sinking feeling at sea

Avoiding that sinking feeling at sea

With Day of the Seafarer focusing this year on mental health and well-being, we are shining a beacon on life at sea on Investigator and how our seafarers mentally prepare for their time among the waves. 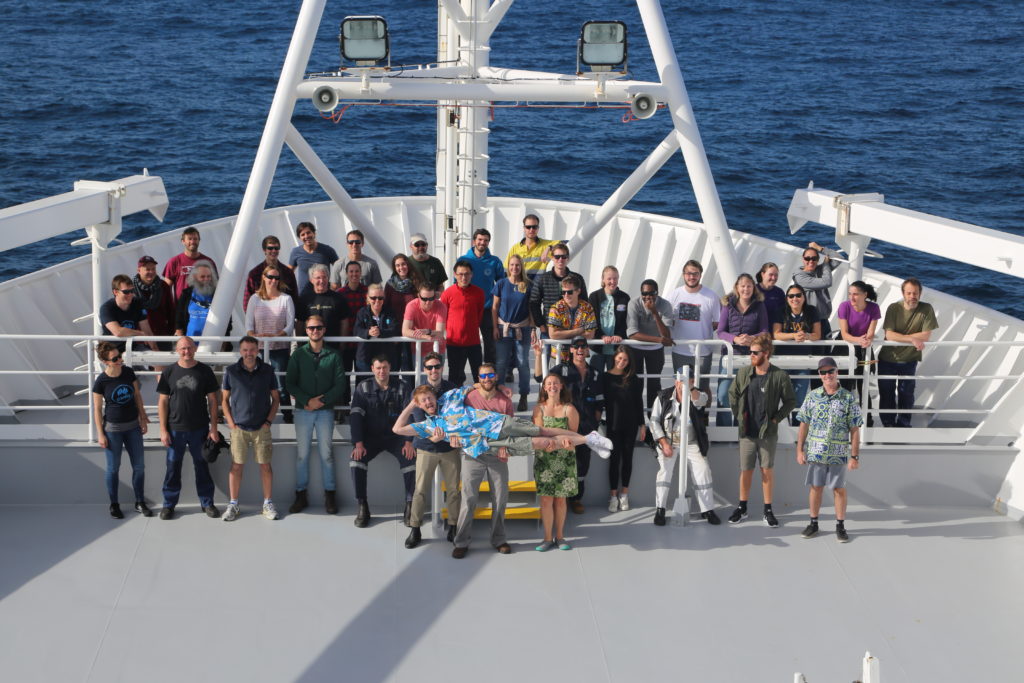 In the middle of the Southern Ocean with Investigator’s science team.

Each year our researchers, technical staff and science collaborators working with the Marine National Facility take to the high seas to answer questions that will improve our lives, our oceans’ health and the planet.

But while working to bolster our planet’s health, what is being done to prepare them for weeks or months at sea? Today is Day of the Seafarer, an international day to to give thanks to seafarers for their contribution to the world economy and the civil society; and for the risks and personal costs they bear while on their jobs. Since Day of the Seafarer this year is focused on seafarers’ well-being, we are taking a look at what goes into preparing for a voyage on RV Investigator, and how our seafarers are looking after their own health and well-being, thousands of nautical miles from home.

Taking care of those who care for our oceans

Capable of being at sea for up to 60 days, Investigator can travel almost 11,000 nautical miles – that’s a long way from home!  This voyage capability means the ship could be halfway to the Antarctic or Fiji when personal emergencies strike. With the ship unable to return to port, this can present difficulties for everyone, making families’ involvement in pre-voyage planning critical to a voyage’s success.

The never-ending work week, rain and demands on RV Investigator

Working at sea is very different from working 9-5 on land.  The views are great, but this office moves around and the weather, well, that can test everyone’s mettle.  Plus Saturdays, Sundays and ‘knock-off time’ all disappear.

Let that sink in!

Reflecting on the physical and mental challenges of working at sea, Mark Lewis, a seasoned sea-goer, said the weather can ramp up the pressure.

“With 25 knot winds, 3.5 metre swell and passing fronts with rain, you have to get on the deck and check the gear, sometimes to find there is a problem with equipment that requires new parts,” Mark said.

“At the same time, the science teams are pushing to use the equipment, especially if the weather is forecast to worsen – they have a limited window.” 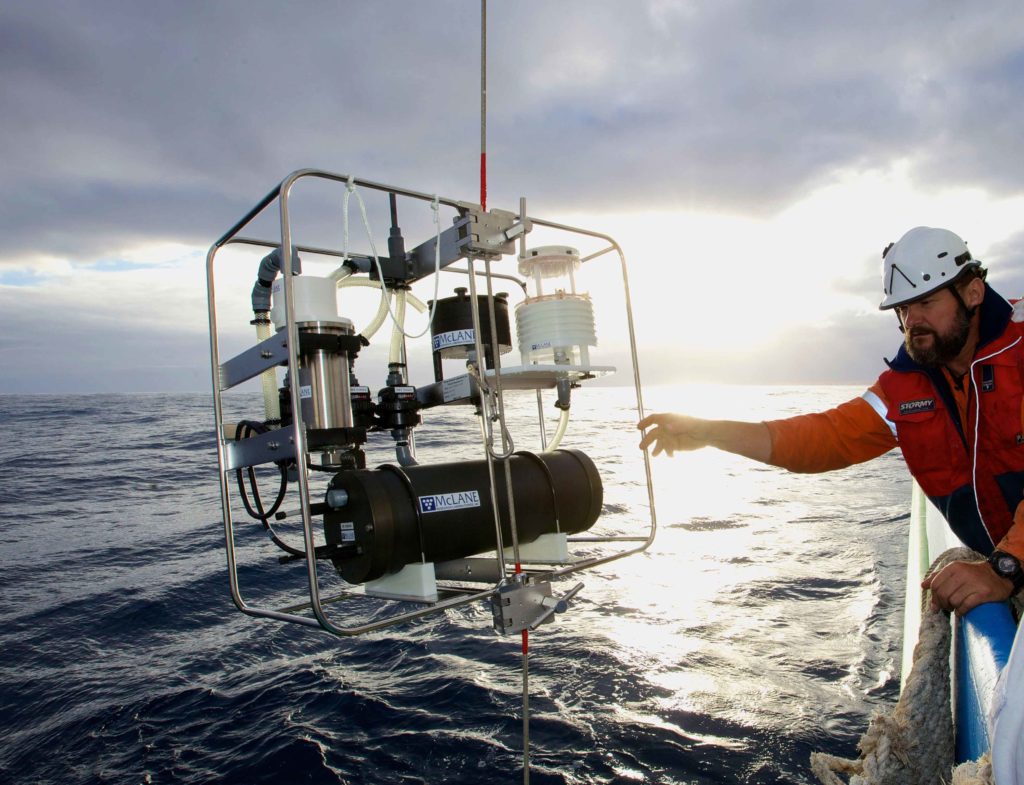 With flat seas, Mark Lewis works with an In-situ pump alongside Investigator in the Southern Ocean.

Adrift ashore and at sea

While our intrepid seafarers are bobbing around the ocean having the time of their lives, their families and friends at home are missing them terribly.

That’s why communication is vital, and Investigator is kitted out with satellite phones and WiFi to keep lines of communication open to home. Yet the strongest support network is much closer – the small community of people making up each voyage. 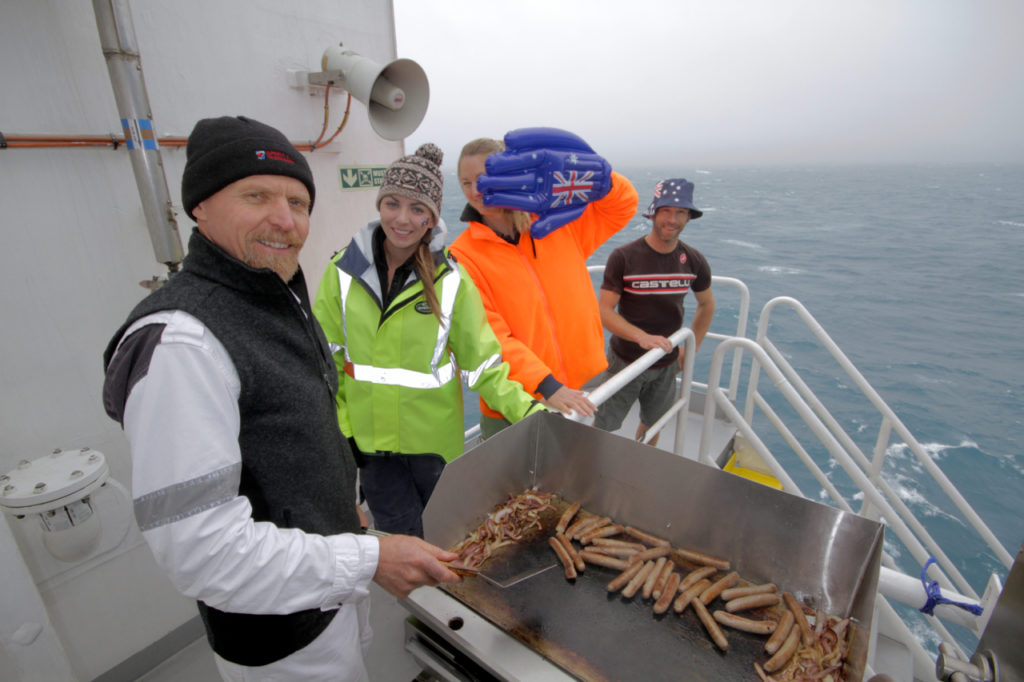 So what to do for entertainment miles out to sea? Have a party of course! Fancy dress nights, fiercely competitive table tennis championships, yoga classes, movies and access to a gym are all activities offered on the Investigator. Not quite to QE2 levels, but hey, a party nonetheless! Maintaining social activity and building connections are critical to life at sea, and something Investigator’s team encourage.  When there are few escapes from work, these are welcome flashes back to ‘real life’. 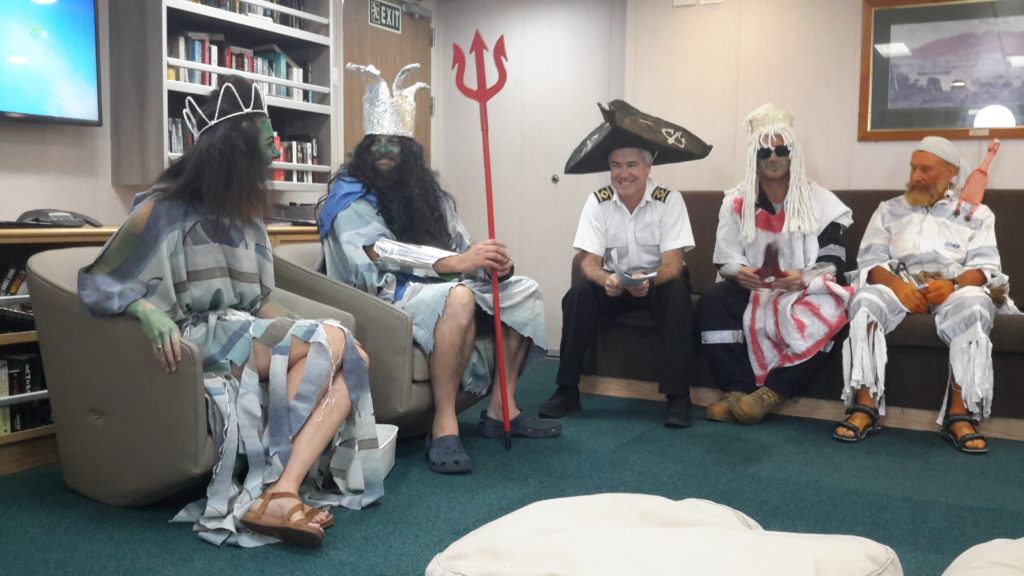 Dress up craziness as the Investigator team celebrate the crossing the line ceremony – complete with King Neptune.

Ian McRobert, initiated ‘oranges’ on a recent voyage– a take on the half-time footy break. The Marine National Facility’s Voyage Manager Tegan Sime loved this concept and uses it frequently.

“Starting ‘oranges’ was a nice way to get people together for a  mid-shift catch up to have a coffee, a snack, chat about how things were going, and offer support for anyone struggling or having a bad day,” Tegan said.

“It’s really important to be aware of your shipmates.  No voyage is the same and everyone has time demands which can lead to frustration and exhaustion, which is something we need to continually improve.  Even finding a spot to sit quietly can be a challenge.” 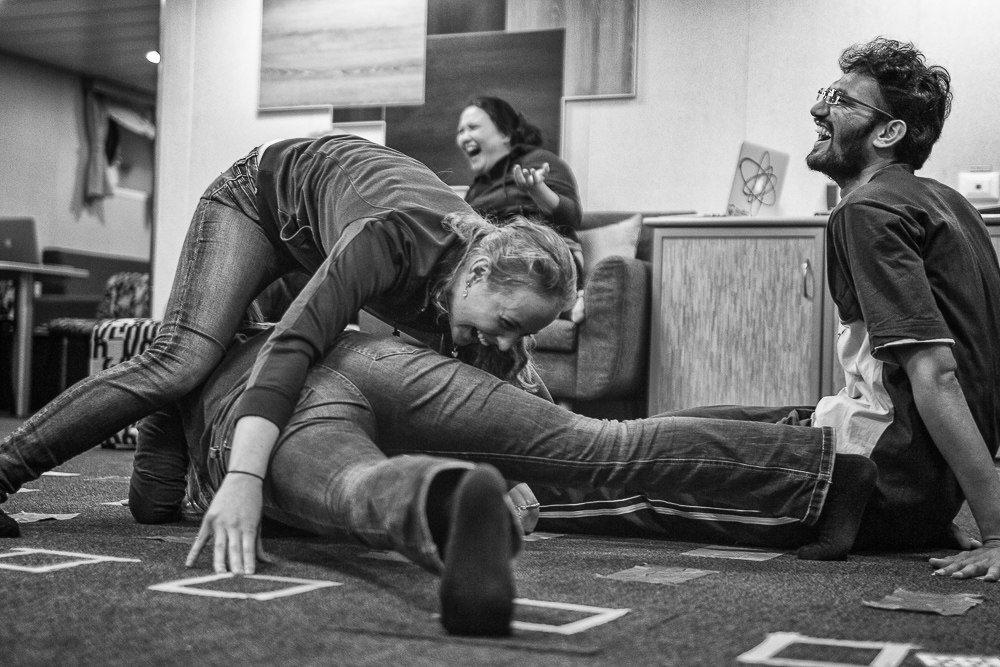 So what about days when you have run out of ‘ahoys’ for ‘me hearties’?  Well, fatigue management is something the Marine National Facility are turning their attention to. After a few weeks of cruising around the Southern Ocean, the strain on larger muscles of the body from working on a moving platform increases fatigue.  Tired seafarers are not safe seafarers, so the Marine National Facility is working with our seagoing support teams to educate and develop an approach that will reduce fatigue, and be effective on board.

So, the voyage is over and Investigator ties back up in port – what can our seafarers expect to feel?

“It is almost like jet lag – your sleep patterns are all off kilter. Getting back to a normal routine can be tough – the world at sea becomes small with the same people and routine. Back on shore, there are lots of people wanting to talk to you, which can be overwhelming and it can be challenging balancing a family’s excitement with a readjustment period. Even driving a car and grocery shopping seems strange!” Tegan said.

For all the challenges and isolation, life at sea is satisfying for most who venture out and see the benefit of the science for the nation.

“To see the faces on the science party light up as a sample comes on deck and the excitement as they complete detailed laboratory investigations, it makes the days of heavy weather worthwhile. It gives even the most seasoned crew a lift,” Mark said.

Come and get on board!

You don’t have sea legs, but would like to visit Investigator? Come along and visit us in August!

Previous post:
Interronauts | Episode 13: Broccoli lattes, robot ecologists, and a new hope against the feline menace
Coming up next:
How CSIRO researchers are tracking the evolution of Australian insects