Capturing the Universe in paint and pixels

Capturing the Universe in paint and pixels

Parts of the invisible Universe have been captured by Wajarri artist Margaret Whitehurst and by our researchers using the ASKAP radio telescope.

In 2019 when we commissioned leading Aboriginal artist Margaret Whitehurst to celebrate astronomy research with a painting, we didn’t know what to expect. It was the same when we set out to scan the sky with our new ASKAP radio telescope. We just didn’t know what we’d be able to see.

Cut to 2021 and we now have incredible imagery in both paint and pixels of our southern sky. It all centres around the Rapid ASKAP Continuum Survey (RACS): a scan of the southern sky with this new and incredibly sensitive telescope.

ASKAP ended up detecting more than three million galaxies – one million of which had never been seen before. It was the most detailed and quickest survey of the sky, completed in under 300 hours. This survey has now become a catalogue for researchers all over the world.

Margaret is a Wajarri artist, and the Wajarri Yamaji are the traditional owners of the Murchison Radio-astronomy Observatory (MRO) site where ASKAP is located.

The newly-released catalogue of key objects, and Margaret’s painting, are unique maps that capture our experiences of the Universe. Both celebrate this scientific achievement and share the beauty of the cosmos but in very different ways. 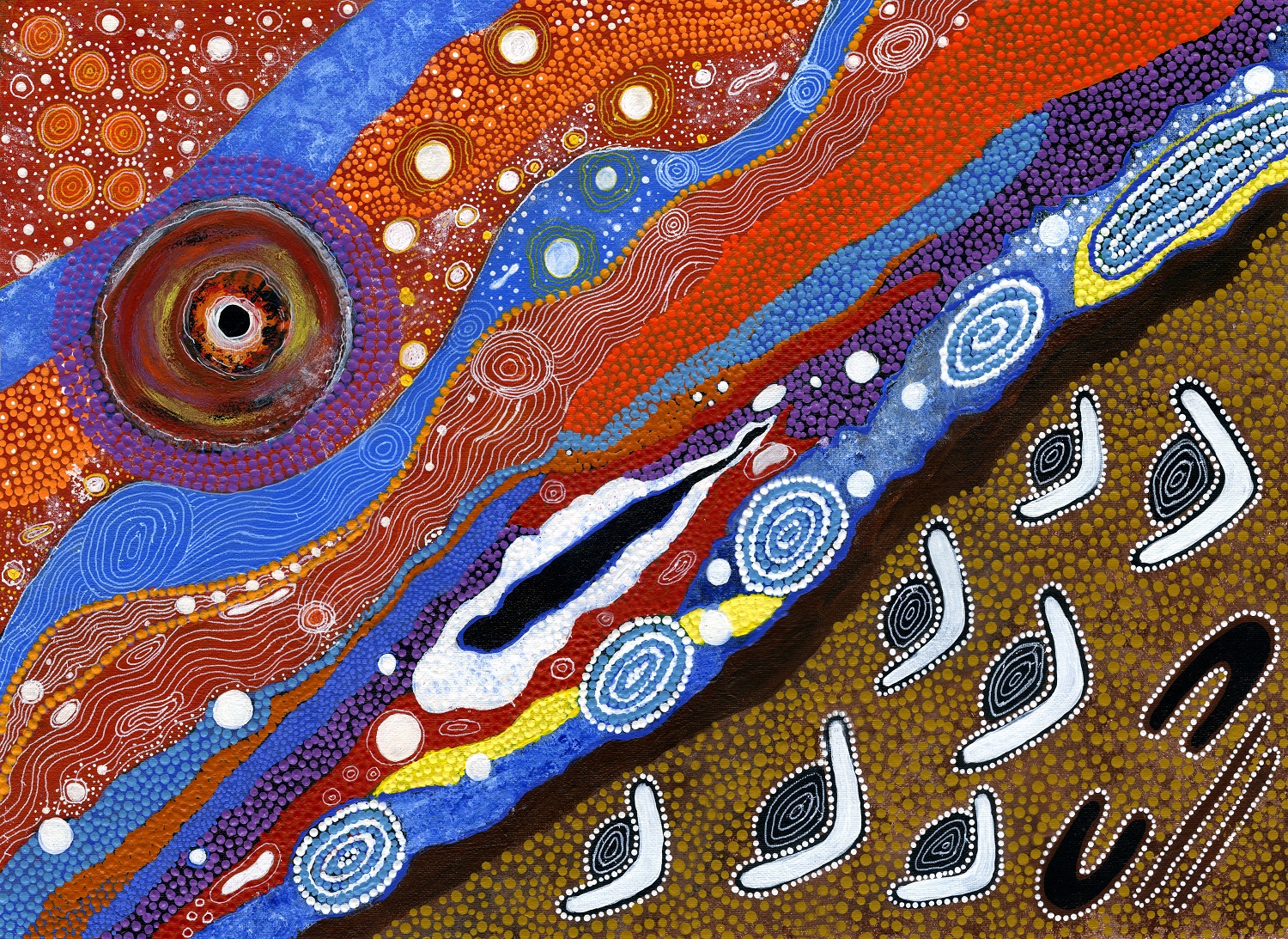 At the MRO, Margaret has said, you can see every star in the sky.

When astronomers using ASKAP showed Margaret their research featuring illuminating colours and objects in the sky that she had never seen before, it inspired her to paint.

Margaret’s dot paintings, created with acrylic paint on canvas, frequently incorporate star-studded imagery. Her work brings to life usually invisible features like black holes and depicts colours our eyes can’t see. A series of Margaret’s works on meteorites has attracted a lot of attention. One piece is now adorning the newest supercomputer at the Pawsey Supercomputing Centre.

Her painting celebrating RACS explores the invisible and visible Universe. It features a large black hole, as well as the Emu in the Sky, the Southern Cross, the Seven Sisters and many coloured bands of light. Observing the sky are the Aboriginal people and seven of ASKAP’s 36 dishes. 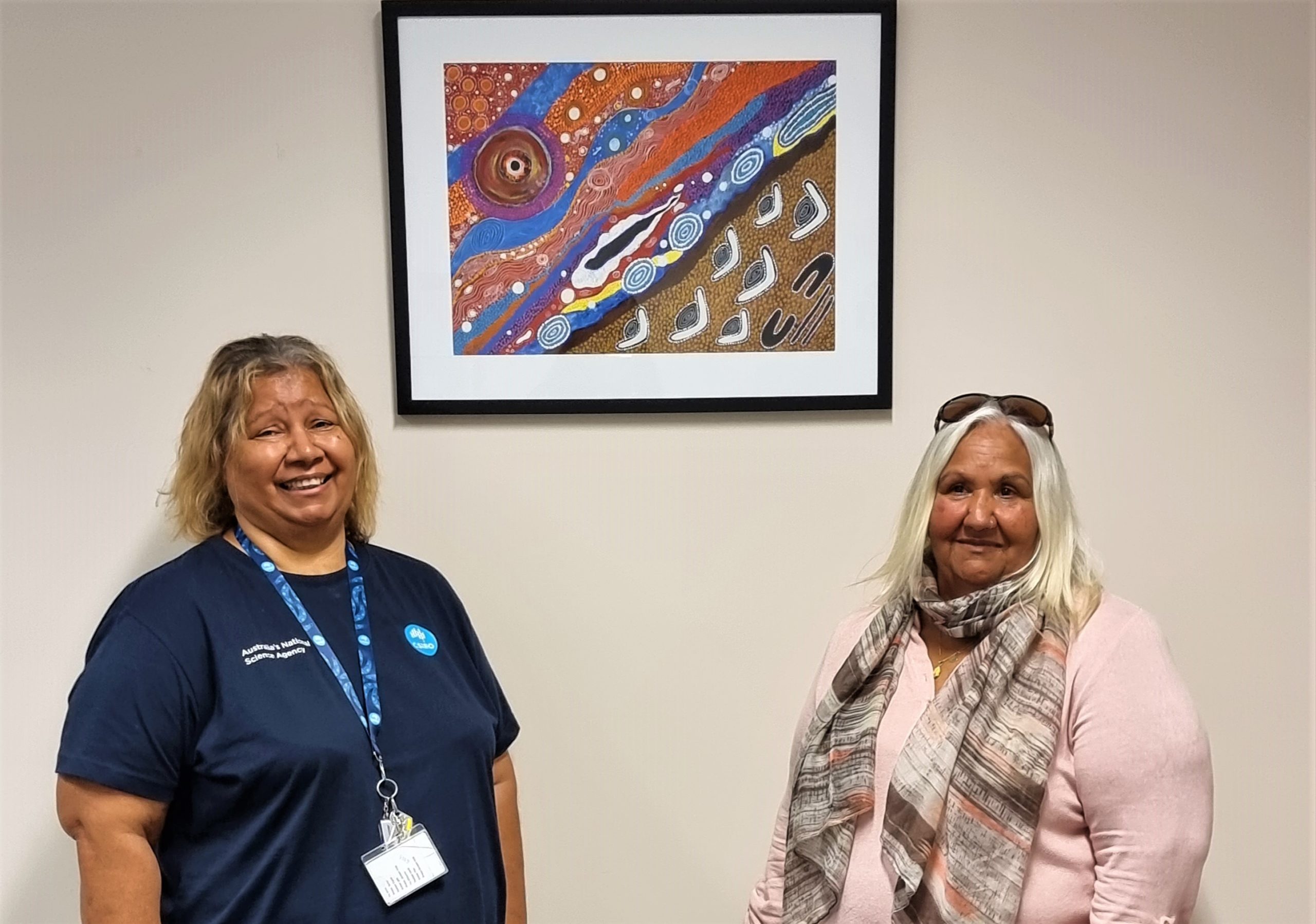 Leonie Boddington, our Aboriginal Liaison Officer for the MRO with artist Margaret Whitehurst and her framed original Universe painting, RACS, at our Geraldton site.

Invisible to the naked eye

RACS makes more of the Universe visible. The survey produced 13.5 exabytes (one billion gigabytes) of raw data that was processed at the Pawsey Centre. The resulting catalogue, a year in the making, details the sky in 799 tiles that in total contain about 2.1 million objects.

“There’s so much that I’ve looked at and thought, ‘Wow, space is amazing!’,” she said.

“You can go to so many parts of the sky and see something really cool.”

The catalogue is now available to researchers through the CSIRO ASKAP Science Data Archive. It’s sure to become a new and highly-valuable resource for people all over the world.

Sharing science and art across cultures

RACS will not be the last record-breaking survey of the southern sky. Likewise, Margaret Whitehurst will not be the last local artist commissioned to create stunning artwork for astronomy research. There are more works already in the making. Projects such as these allow us to connect people with Wajarri culture, as well as the research happening on site.

Soon the MRO will be home to one of the telescopes of the international SKA Observatory project.

The Shared Sky exhibition, facilitated by the SKA Observatory, celebrates the Indigenous cultures of both Australia and South Africa where the two SKA telescopes will be located.

We acknowledge the Wajarri Yamaji as the traditional owners of the Murchison Radio-astronomy Observatory site where ASKAP is located.

Take the RACS virtual tour of the sky

Previous post:
Old, goopy museum specimens can tell fascinating stories of wildlife history. Finally, we can read them
Coming up next:
Blowing the lid off the volcanic story of Heard Island